Saving The Sequoias From Raging Wildfires 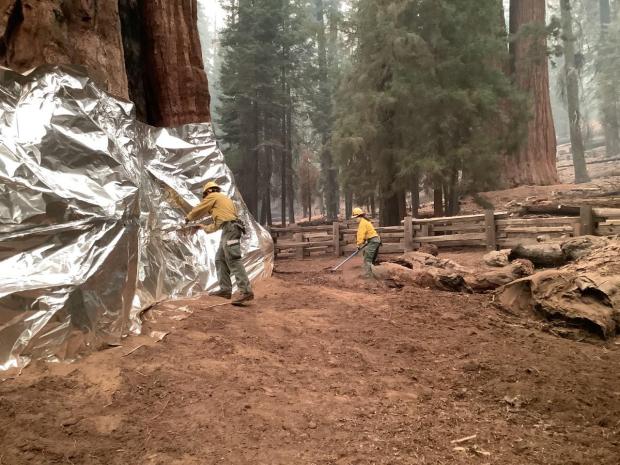 The KNP Complex fire, started by lightning strikes the night of September 9, continues to grow in the Park and currently covers 23,743 acres.

Last Thursday, the fire reached a small area of the Giant Forest, in the area known as the Four Guardsmen, a towering group of trees that stand sentry on the road to the forest. However, authorities reported yesterday that the famous sequoias remained unharmed over the weekend. 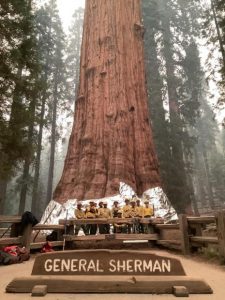 The trees had been thoroughly prepped with the removal of nearby vegetation and duff, decaying organic matter on the forest floor. Firemen also wrapped the bases of the massive trunks in a fire-resistant material, akin to an aluminum foil fabric. It’s the same material used to protect houses in fire events according to sources.

Among the wrapped trees is the General Sherman tree, over 2,000 years old and the world’s largest tree at 275 feet tall and over 36 feet in diameter at the base. “We basically told the fire crews to treat all our special sequoias like they were buildings and wrap them all up, and rake all the litter away and roll away the heavy logs,” Christy Brigham, chief of resource management and science for the Sequoia and Kings Canyon National Parks, told CNN in a September 17 article.

While fire can actually help giant sequoias reproduce—drying and cracking seed-filled cones, clearing out debris, and loosening the soil—officials are concerned about the frequency and intensity of recent wildfires, reported NPR. “Two-thirds of all giant sequoia grove acreage across the Sierra Nevada has burned in wildfires between 2015 and 2020,” the National Park Service told CNN this past June. Last year’s Castle Fire killed 10 to 14% of all the mature giant sequoia trees, an estimated 7,500 to 10,600 trees, that could have ranged from hundreds to 3,000 years old, NPS told CNN.