Who Says Great Employees Are Hard To Find These Days?

Ten years after starting his company, Michael Hatcher went on a search for talent that continues to this day.

In 1996 Michael Hatcher went back to college. No, he didn’t sign up for any classes. That spring he drove from his landscape business in Memphis, Tennessee, to his alma mater, Mississippi State University, specifically to recruit talent. At the time it was a big step for him — in fact financially scary given how his company had plodded along barely growing for almost a decade thanks in large part to its inability to retain valuable employees.

“I did not even have enough money to pay myself at the time,” recalls Hatcher, president of Michael Hatcher & Associates, about his trip to Starkville, Mississippi. “I wound up paying those two young men more than I could afford. But I needed them and I also realized to attract them I had to create a vision so that they could see the company moving and creating opportunities for them rather than us just remaining a small company.”

His success in convincing those graduating students (one of whom remains with him to this day) to move 180 miles north to established a pattern that has helped Hatcher and his wife, Mary, company vice president, to build one of the most respected and successful landscape companies in the Mid-South.

That pattern? If you need talent, go out and find it and recruit it rather than waiting for it to find you. Since that first recruiting trip, Hatcher has identified, pursued and hired talented men and women from MSU and almost a dozen other universities.

Affable, energetic and ebulliently optimistic, Hatcher’s success in attracting, developing and maintaining talented designer/salespeople and managers (some even rising from the crew level) has allowed he and his wife Mary to grow their firm to almost 100 employees. Their company now provides a full palette of environmentally friendly landscape and lawn services in a 125-150 mile radius in western Tennessee, eastern Arkansas and northern Mississippi. 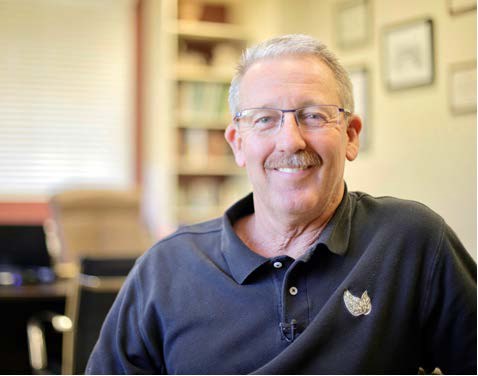 Michael Hatcher’s recruiting efforts have allowed he and his wife to build one of the most progressive landscape companies in the Mid-South.

The power of positive publicity

Hatcher doesn’t go on recruiting trips as often these days due to the visibility of his company in its service area. In the 1990s, Hatcher, outgoing and an entertaining storyteller, advertised and also hosted a garden show on local television. “It didn’t take me long to see that was happening, so I started to focus in that direction,” he continues.

While television boosted his company’s reputation, in more recent years he’s been focusing its efforts on community service, installing almost 90 learning gardens at schools in Memphis and Shelby County under the umbrella of The Kitchen Community. The stated goal of that 10-year-old program is to “connect kids to real food, increase academic achievement, and drive community engagement.”

He’s keenly aware that other factors — apart from pay, as important as it is — influence talented people to consider one job offer over another. “Young people today want to work for a company that they feel is giving back to the causes and needs they support, many of the same things that we, as a company, also support,” says Hatcher. 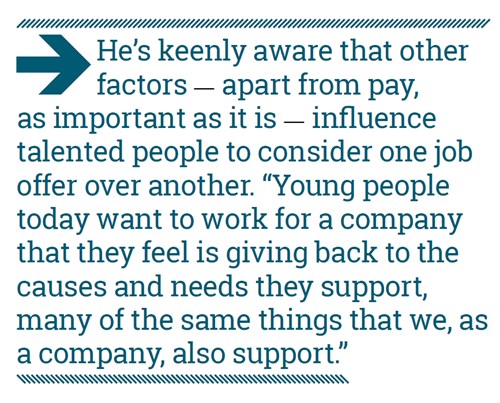 The good prospects also want to work for a company with modern and clean facilities. This past year Michael Hatcher & Associates relocated from its Memphis location to new headquarters on a 22-acre site in Olive Branch, Mississippi. The company’s new 10,000-square-foot building and surrounding property, featuring environmentally friendly landscape trends and composting, is now known as The Landscape Center. Schools and senior care facilities are being encouraged to visit The Landscape Center for field trips.

Hatcher equates his new headquarters with what major university athletic departments are doing in upgrading their stadia and training facilities to attract talented athletes. “Besides the facility and being reputable, you’ve got to have nice equipment and nice trucks too,” he says. In that regard he sees himself as not only a recruiter but also as “a head coach.”

Another characteristic that defines hiring great employees these days, says Hatcher, is their need to see a defined path for their careers and also their mobility, both of which Hatcher is willing to acknowledge upfront with them.

“I have recruited and hired some really good people that I knew weren’t going to stay with me forever. Even so, I’ve told them I want you to come work with us. If they have a goal to someday own their own business I encourage that. That’s the same goal I had. I will tell them there’s nothing wrong with that. Let’s figure out what your career path is as well as being a contributor to Michael Hatcher & Associates,” says Hatcher.

But Hatcher also makes it clear to new hires that their goals as employees must perfectly align with company goals. He uses the analogy of a set of railroad tracks.

“As long as those rails are parallel — the employee is getting what it needs from the company and the company is getting what it needs from the employee — it will allow us both to head in the same direction. That train will run down those rails and pull as big a load as you can imagine. But if there’s ever a deviation in those rails, there’s the possibility of a train wreck. We’ll have to stop the train and let them (employee) off in a respectful way,” says Hatcher.

Yes, his company, like almost all landscape companies, is struggling to hire and retain enough hourly laborers to meet growing demand for landscape services. He sees that problem as being a pay issue.

“Mostly what these people want to know is ‘how much are you going to pay?’ Labor is always a problem and I don’t think we will ever eliminate that problem.”

But while he’s always seeking employees, including laborers, he’s convinced that the talent at the next levels — from crew leaders to supervisors to design/sales — is what separates growing and profitable companies from the others in every market.

“That’s why when I market, I market for two things,” continues Hatcher. “One is for customers, and I’m always marketing and recruiting for good employees, too.”

Next post During Design, Manufacturers Must Consider All Forms Of Snow Conditions