The minimum wage issue is raising its knobby little head again. Like Whack-A-Mole it pops up regularly but unpredictably at different times and in different locations. When it does, it always generates lots of noise, pro and con. A recent study of Seattle’s phased-in $15 minimum wage offers up the dark side of minimum wages. That study more than suggests that minimum wage hikes often harm the very people they’re supposed to benefit – low-wage employees. 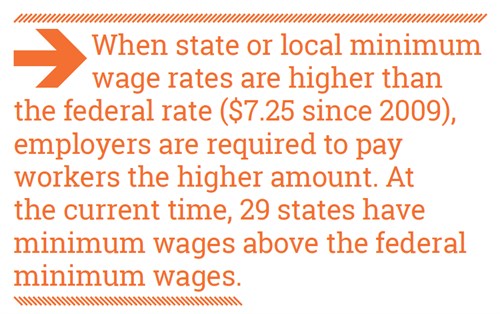 The University of Washington researchers wrote about Seattle’s rising minimum wage: “… we conclude that the second wage increase to $13 reduced hours worked in low-wage jobs by around 9 percent, while hourly wages in such jobs increased by around 3 percent. Consequently, total payroll fell for such jobs, implying that the minimum wage ordinance lowered low-wage employees’ earnings by an average of $125 per month in 2016.”

Yes, the national government, state or city governments can set their respective minimum wage rules. That said, none of them can tell businesses how to organize their operations, or how much labor to use vis-a-vis other resources, capital and technology.

In the face of minimum wage hikes, businesses — and especially financially pinched small businesses — have options to bring that portion of their budgets back in line. The most obvious option is to raise the price for their products and services. Or, they may forego hiring (at least in the short term) to maintain profitability. Some companies will automate to reduce the number of workers on their payrolls. None of these options helps low-wage earners, especially those seeking employment.

Nor do hikes in minimum wages reduce poverty — so says the business-backed nonprofit Employment Policies Institute. This is one of the arguments always made when the subject of a minimum wage hike is broached.

Just about the same time that the Seattle study was released, our friends at the law firm of Zlimen and McGuiness in St. Paul, Minnesota, alerted us that the Minneapolis City Council passed an ordinance that increases the minimum wage to $15 per hour for that city. Like Seattle, the minimum wage will be phased in year-by-year, reaching $15 on July 1, 2022.

Other cities that have passed laws to raise their minimum wages to $15 an hour over a period of several years include Los Angeles, San Francisco, Washington, D.C. and New York City. The city with the highest minimum wage now is Emeryville, California, at $15.20 for companies with more than 56 employees. On July 1, 2018, the minimum will rise to $15.60.

Unlike Seattle and Minneapolis, St. Louis will see its minimum wage efforts reduced. The St. Louis passed an ordinance in 2015 that raised the city’s minimum wage to $10 this year and to $11 in January 2018. But the Missouri General Assembly negated the city’s efforts by passing a law earlier this year prohibiting local governments from setting a higher minimum wage than the state’s $7.70.

Pay for performance is the bedrock upon which the free market stands. Linking personal advancement and wages to productivity and value is precisely what has made (and kept) the United States as the most successful and dynamic economy in the world.