While you're getting a handle on your employees' wages, there's one compensation package you shouldn't ignore: your own.

When Terry Delany first ran his company GroundSERV, based in Fayetteville, Arkansas, he paid himself and his partner owners a $1,000-a-week salary because “my partners were older and wiser and decided that was a good salary.”

As the company grew, they continued to pay themselves roughly 33 percent of the revenue in salary. But that soon became a big problem.

Delany ended up buying out his partners and struggled for a decade with the question of how to even out cash flow and pay himself a fair salary. When cash flow became unmanageable, he hired a consultant. The first thing the consultant said: “You can’t pay yourself that salary.”

What’s the trick when landscape owners are figuring out what a fair salary for themselves should be? “There really isn’t a trick,” Delany explains. “It’s business 101.”

Yes, ladies and gentleman, we’re talking about knowing your numbers—the No. 1 way you can learn to not only better manage your business, but also earn a better living as a landscape business owner.

“I don’t care if you’re grossing $50,000 or $5 million a year,” Delany says, “you won’t create cash to reinvest in your business if you don’t understand your numbers.”

In the early stages of a landscape business, an owner rarely factors his or her actual salary. “They work really hard and hope there’s some money left to pay themselves after bills are paid,” explains Delany, who grew GroundSERV to a multi-million dollar commercial landscape and facility maintenance company before starting Davis+Delany, an industry consulting firm specializing in employment issues.

“Lots of owners don’t even take a salary,” explains Ed Laflamme, industry consultant with The Harvest Group. “They take money out as money is there. That’s not a strategy.”

According to Turf‘s Compensation Survey, 20 percent of landscape contractors say determining their salaries is a trial and error process; they aren’t sure what they are going to make each year. When asked if they thought they’d be making more money as landscape business owners, the majority of landscape contractors (36 percent) said they weren’t sure, followed by 35 percent who said they thought they would be making more money.

“The average owner doesn’t make a great salary,” Delany says. “Because there’s no barrier to entry, they can just win more jobs and work harder, and they are willing to work harder and longer to make the same amount of money because that’s easier than going out and finding a job.”

At a $24,000-per-year salary, Chase O’Shea knows he’s not making a fair wage as a landscape business owner yet, but as a junior at Northeastern State University majoring in business, he knows he has time. “Right now, I’m learning how to budget the right way,” says the owner of Chase Lawn & Landscaping in Tulsa, Oklahoma. O’Shea started the business in 2009 at the age of 14. Today, the business has a revenue of $250,000. “When I graduate from college, my business will have grown and my salary will increase to $120,000 a year.”

Only in his fourth year of business, Joshua McCarty, owner of Mint Landscapes LLC in Lacey, Washington, feels the same way. “I don’t think I make a bad salary for right now. I know it will continue to grow,” he says. “Once I get more into commercial work, that will help. It’s a learning process.”

So what is a fair salary for owners of landscape industry businesses? According to the Turf survey, landscape business owners made $53,323 on average in 2014. They expect an increase this year to $59,265 on average. This is based on an average revenue of $542,653. Landscapers said corporate officer/owner/partner salaries make up approximately 10 percent of total sales. According to a recent employment survey from the National Association of Landscape Professionals (NALP), average executive salaries ranged from $54,000 to $115,000.

Initially, revenue can help an owner determine a fair wage. “Contractors with revenue around $100,000 to $200,000 can pay themselves salaries up to 35 percent of revenue because their overhead is minimal; they are performing much of the labor themselves and they typically work out of their garages or homes,” Delany says. “But once they reach $400,000 to $500,000 in revenue, owners usually can only pay themselves 5 to 15 percent of revenue because they have a much larger overhead.”

The service mix a business offers can also impact how an owner pays himself. “A mowing company in the South has pretty steady work year-round so planning a salary is easier,” Delany explains. “A design/build company in the North is a very different story—even if they do snow plowing, it still makes it almost impossible to create a dependable income stream on which to plan a salary.”

Irregularity is the killer

When a business is new and located in a climate where the majority of it’s revenue comes in during the spring and summer, the Internal Revenue Service expects to see owners paying themselves more during the busy season and less during the off-season. However, during a good snow season, an owner might get used to a nice draw in the winter. During a slow season, that draw can drop dramatically. Unfortunately, despite the nature of the business, the IRS frowns on irregular business owner payments, especially after that business is more established, Delany says.

“If your business is six to seven years old and the owner is still drawing an irregular salary throughout the year, it’s a huge red flag for the IRS to come in and take a closer look at your business,” he explains. “This can be very disruptive.”

In a nutshell, “irregularity is a killer,” Delany explains. “Those owners who budget for a salary and pay themselves a regular wage are building a foundation for success. Early on, this can be hard to do, but I’ve seen owners in larger companies that still just take draws ‘when the money is there.’ This points to a lack of understanding of the financial health of their businesses.”

One of the factors that makes paying a regular salary easier is having a steady stream of income. For businesses that do the majority of their work in the summer, spreading out cash flow can help. At GroundSERV, for instance, Delany’s crews mowed from April to October, so that’s when 80 percent of the revenue came in. Instead of charging the client for just those months, a contractor can present commercial clients with annual contracts to spread out the cash coming into the business, Delany suggests. “So, for instance, you charge $1,000 over 12 months as opposed to $1,500 over eight months,” he says. This can help companies in the North because even if they offer snow removal during the winter, Mother Nature doesn’t always provide a guaranteed amount of snowfall each year. 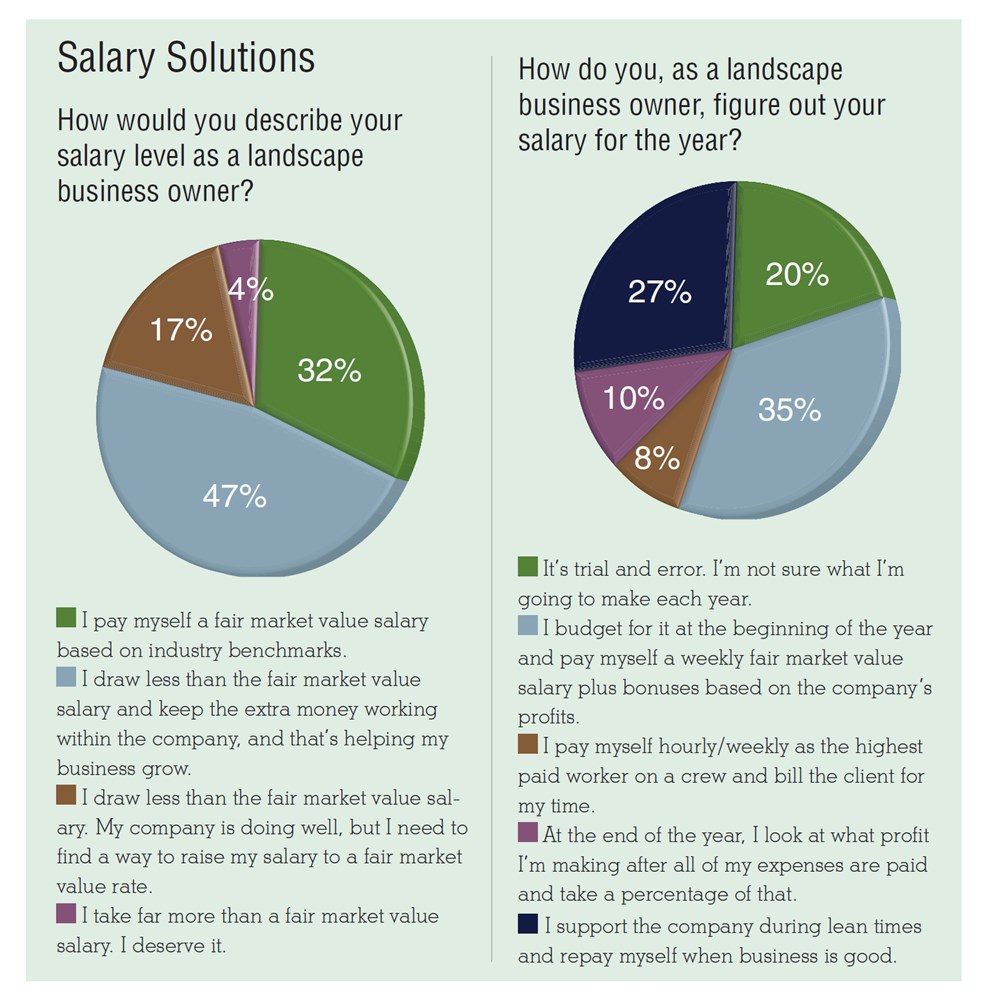 Many times, Delany finds that those owners who can’t commit to a regular salary also have poor marketing and sales tools in their companies. “Building a 90-day or 120-day sales funnel and constantly working to keep that funnel full can ease the burden on paying yourself regularly,” he advises.

Get it right from the start

The first rule of factoring a salary for a landscape business owner is creating a realistic budget for the coming year, Delany advises.

“While doing this, be honest about the potential to not hit that budget. Figure 10 to 15 percent less and then set the owner salary based on that,” he says. “If things go well, you can always add an extra owner’s draw later in the year. It’s my experience that once a salary is taken, it is rarely available to be put back into the business if sales goals aren’t met.”

As part of that budget, owners need to “take a set salary each week—even if it’s a modest amount—so they are getting a payroll check every week to help with cash flow and for budgetary purposes,” Laflamme advises. “It can be very conservative, but to begin the habit or mindset would be smart.”

In the end, the biggest mistake owners make isn’t what they are or aren’t taking for a salary, but rather that they aren’t paying attention to their numbers so they know how their business is doing, which warrants their salary.

“They don’t look at their profit-and-loss statements. They don’t understand gross profit margin. And because they don’t pay attention to their numbers, they don’t know if they are pricing their jobs or paying themselves correctly,” Laflamme says. “You need to keep track of your P&L, make sure it’s set up right, tracking by department, and you need to check your gross margins. You need to measure right to the dollar how much you bid and how much you get. You need to measure the profitability of your jobs.”

Operations-driven contractors lacking a true understanding of these numbers should hire a part-time bookkeeper, Laflamme advises.

Delany agrees. “Find a local accountant familiar with the green industry,” he says. “They can guide the owner on what is reasonable and also help them look ahead so they can save cash for future expenses.”

Some landscape business owners who have figured out the best way to pay themselves look at salary as total compensation versus a weekly or biweekly paycheck.

Delany has been successful paying himself this way, and so is Zach Dennis, owner of Lawn ReLeaf in North Little Rock, Arkansas. He wants his salary to be as low as possible because it’s taxed the most. Additional components make up his total compensation, including health insurance, which is paid for by the company, as well as vehicle and vehicle insurance, computer, cell phone and service, etc. “The business pays the majority of my expenses,” he says. “This way, my money goes further because it’s pretax.”

Dennis also owns the building his company rents, so he receives tax-free income that way. “I make sure my compensation grows, but instead of just raising my salary, I can raise my rental income,” he says, sharing the mentality he follows that helps him continue to grow his company, which will reach $800,000 in revenue this year. “Instead of just thinking about today, I am thinking about where I want to be in 20 years and building the infrastructure to manage that growth.”

“If an owner hasn’t done so already, he should stop and take a hard look at his current financial position,” Delany says. “An owner who hasn’t had a raise in several years—or, worse, has taken pay cuts—may begin to feel burnout. Most people can only work so hard for so long with no reward. It may be time to restructure your business and get back to a salary that makes you want to push forward.” 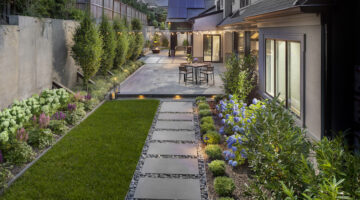