Power Up Your Company With A Peer Group

Launch your company to the next level by sharing and learning from other owners.

If experience is the best teacher then Ben Carruthers might rightly be considered one of the deans of The University of Landscape — certainly no less than a distinguished professor given his experience. Carruthers, however, harbors no such pretensions even though he’s approaching his 40th year as the owner of a major Dallas-area landscape company.

The way he sees it he’s still got a lot more to learn about owning and running a landscape company. For that reason, Carruthers, owner of Carruthers Landscape Management, participates in a peer group facilitated by long-time lawn care and landscape business owner Fred Haskett.

“I appreciate that the other owners in our group see things through different eyes, and there are a lot of things that they do better than I do,” says Carruthers, whose approximately 100 employees service commercial properties from two locations throughout the Dallas/Fort Worth Metro market.

“The Dallas market has always been a shark tank. But when I got in it they (competitors) started heating it up and now it’s boiling,” he adds in his friendly and deliberate north Texas drawl. He credits participation in his group as leading to significant improvements in his company — a revised handbook, more efficient onboarding processes, improved training, etc.

“We made a lot of changes to our company this year, and we’ll make an equal number next year,” he continues.

Carruthers is one of several hundred green industry business owners now participating in peer groups, learning and sharing what’s worked and not worked for them with other owners in small confidential groups.

His facilitator, Haskett, in his relatively new role with The Harvest Group, is the most recent industry expert to begin developing peer groups. Other popular industry consultants busy developing and facilitating peer groups include Bruce Wilson, Jeffrey Scott and Marty Grunder.

The proliferation of peer-to-peer networks is one of the landscape industry’s most significant trends … not that it’s a particularly new trend. Wilson and his former partner entrepreneur Tom Oyler started the first industry peer group about 15 years ago. Wilson of Bruce Wilson & Co. now facilitates eight peer groups, which include three “legacy” groups and five in partnership with the National Association of Landscape Professionals (NALP).

Today, there are at least 20 landscape groups and one group headed by Scott composed of irrigation company owners. New groups are being formed regularly. These alliances consist of non-competing owners representing companies of somewhat similar size and service makeup. Groups can have as few as four or five member companies and as many as 12. Most facilitators, however, like to keep them to about six owners.

The goal of these groups is to get members to “open the doors” of their operations to each other and to freely share their experiences as owners — employee issues (hiring, firing, motivation), marketing/sales, operations, financials and so forth. For this reason, members are required to sign non-disclosure agreements, shares Wilson.

“Members engage with each other on a regular basis to build trust and create lasting, business-building relationships in a confidential setting,” he adds.

Peer groups are basically self-governing. Members decide where they’re going to meet and when, what they’re going to discuss and ultimately — with input from their facilitator — who can become a member. Most peer groups meet face-to-face twice annually along with scheduling teleconferences at regular intervals.

Peer groups rely upon facilitators to administer them. The role of facilitators may vary slightly from group to group, but apart from helping determine the group’s makeup and scheduling meetings and teleconferences, their main role is to keep discussions among members on point and constructive.

So, at what point in a company’s size and development should an owner investigate joining a peer group? The answer is different for every owner and every company.

The company owners Turf interviewed for this report say that eventually their companies developed to a certain size and complexity where they struggled to maintain control and profitability. Trying to keep their firms moving in the right direction was exhausting them. They realized they needed help.

While owners of companies with annual revenues of $500,000 or less may join and successfully participate in a peer group, the majority join because their companies have reached $1-million-plus and they can’t manage them effectively on their own. Companies in the $2-million to $8-million range seem to make up the majority of group members in today’s peer-to-peer alliances.

Seth Kehne joined a Jeffrey Scott group about five years ago. Kehne’s company was doing about $1.7 million a year then.

“At the time, I was doing all of the day-to-day work,” he recalls. “This year we’re going to be doing about $5 million and none of my job description is day-to-day,” which, in large part, he credits to what he learned and implemented from his peer group participation.

Peer group a good fit for you?

This, of course, leads to the question — what type of owner excels as a peer group member? Company size is not an accurate predictor of success. Owner temperament and a willingness to listen and contribute are better indicators.

Facilitators and peer group members vet prospects and must agree before letting new members join their group. New members, replacing those that have left for a variety of reasons, are always welcome because they bring new ideas to the discussions.

“There are large companies that would make terrible members and small companies that make awesome members,” says Scott, who adds that it generally takes new members of a group “a couple of meetings to figure out ‘the rhythm’ of what’s going on.”

“A lot of the success of a peer group is getting the right people in the first place,” adds Kehne.

“Members must also hold each other accountable,” says Haskett. “When somebody in the group says for the third meeting or conference call in a row, ‘I haven’t gotten around to it yet.’ The other members get on them for it. We call it ‘care-frontation,'” says Haskett.

“You don’t want to show up at the next meeting without having fixed or least showing that you’re working on the problem you identified to the group the last time you were together. The accountability aspect is really important. Peer pressure can be an effective way of getting someone to take action,” says Kehne.

Mike Schimmel, president of Bella Terra Landscapes in Lincoln, Delaware, adds: “When you say you are going to do something to improve your company and you don’t do it, then the other members look at you like you just don’t care. There is an elevated sense of doing.”

Cost worth the benefits?

The first question anyone considering joining a group might ask is: What will it cost me in terms of time and money?

Owners often view the cost of joining a group as an expense rather than. as an investment in their businesses. That’s skewed thinking, say peer group members Turf interviewed. They say that the benefits of participating in terms of improving their businesses and forming alliances far outweigh the costs.

“For us the decision to join a peer group was a no-brainer,” says Kehne in Knoxville. “The opportunity cost away from work is the one I had to think twice about. The majority of people I’ve gotten to know in my group say the return they get is much more than they spend in time and money.”

Jeffrey Scott says the members of his groups regularly improve profitability by 27 percent after their first year.

“I wouldn’t let financial considerations dissuade anyone from joining a peer group,” adds Schimmel, who is finishing in his first full year in Haskett’s Harvest Group.

All of the peer groups identified by Turf magazine require members to pay for their own travel to attend two face-to-face gatherings with fellow members annually. Apart from the cost of airfares and hotels, members pay facilitators for their services, too. Depending upon factors such as face-to-face meetings, conference calls, one-on-ones with their facilitators, etc., fees can range from $3,000 to $9,000 annually per member.

Several facilitators base their fee structure upon the size of the companies in the group, with companies in the $500,000- to $2-million range, for example, paying less than groups composed of companies in the $5-million-plus category. Others, such as consultant Jeffrey Scott, charge the same fee regardless of company size. Scott, 10 years as a facilitator, maintains one of the largest network of peer groups, seven for landscapers, one for irrigation pros. 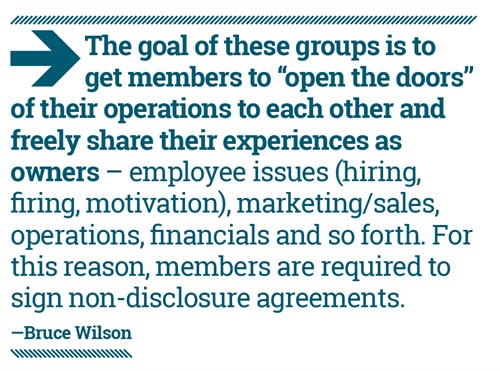 Then there’s the time away from their companies. Participation in a peer group requires members to be away from their businesses for face-to-face get-togethers two to three days twice a year.

Group members, including their facilitator, generally meet for a casual dinner the evening before beginning the official working/sharing meeting the following morning. They may work the entire day in the agreed upon location. Or, after lunch that first day they may tour one of the member company’s facilities. Later that same afternoon or early evening, after owners have had a chance to wind down a bit, everyone reconvenes for some sort of recreational event.

In most cases, group members meet again the morning of the second day for more sharing of issues and topics — often financials or personnel matters. Most peer groups break up by noon the second day when everyone heads back to their businesses or homes.

Once they return to their businesses, it’s time to implement some of the ideas they received within their group.

“When we first started it was like drinking from a fire hose but now it’s like drinking from a high-powered faucet,” says Kehne. “I came back from my first meeting with five things to do. But now, years later, even if the group can help me do one thing better it can save my company thousands of dollars a year.”