The Power Of Being Productive In Your Mowing Business

Landscape contractors and equipment manufacturers provide some of their best productivity-boosting tips.

Productivity is key when it comes to running a profitable mowing business. But boosting productivity can also be a big challenge, particularly when it comes to getting the crews to care. They want to get the work done, but they’re often not committed to the bottom line and aren’t necessarily worried about how efficiently they are performing. Turf spoke to some of the industry’s mowing manufacturers, as well as a variety of landscape contractors, to find out what they recommend in terms of boosting productivity and getting crews to care.

Getting crews invested in the work they’re doing — and how efficiently they’re performing — is a hot topic, says Brent Ayles, president of Ayles Natural Landscaping, Ltd., in New Brunswick, Canada. He views himself as a coach and says other leaders should do the same. If you look at it that way, you can start to think about what it is that your team needs to win.

“The first step is to define that win,” Ayles says. “Build a scoreboard. Players need to be able to see how they’re doing. They also need to know how much time is left.” 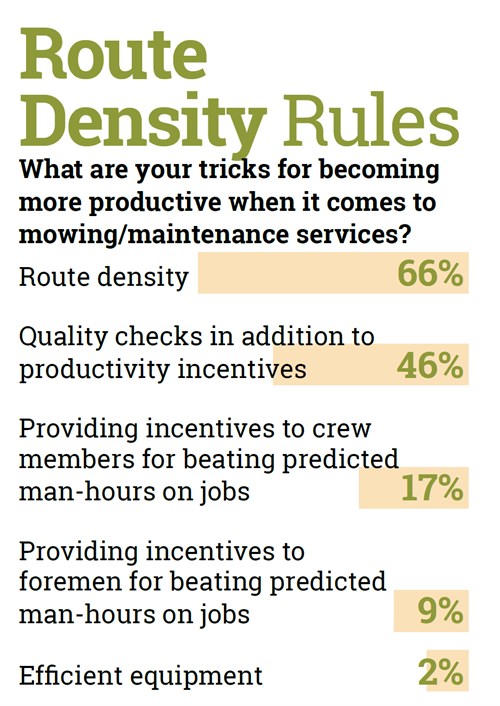 Jason Wegiel, director of services for Neave Group, headquartered in Wappingers Falls, New York, agrees. He says that transparency is vital in terms of getting crews to care. Being transparent with numbers – and where things stand – is the only real way for them to know if they’re hitting the mark or if they’re falling short.

“We provide crews with budgeted hours, and then we post the actual hours for everyone to see,” Wegiel says. “We’ve turned it into a friendly competition where they are incentivized to compete for their team. All seven mowing crews are in competition against one another.”

Wegiel says that teams earn points based on their productivity – but they can lose points, too. Factors such as tardiness, no-shows or callbacks equate to point deductions. It means that the actions of an individual can affect the whole team. Wegiel says that’s been a valuable lesson revealed through this competition.

“The winning team gets gift cards,” Wegiel says. “They’ve really bought into the concept, and we’ve noticed a difference in productivity since we’ve started doing it. It’s not just the gift card, it’s the accountability. They don’t want to see their job marked in red – because we color code it, too. They want to see green. Before we did this, it just wasn’t so tangible in terms of how crews were performing. Now they see it all laid out before them and they want to do a good job.”

Bryon Delong, account manager for Bluegrass Landscaping & Maintenance in Bridgeton, Missouri, says that transparency and visibility have worked for them, too.

“We track every minute our guys work on every task for every property,” Delong says. “When bidding, we create a budget for how much time they should receive for these tasks. Every day, we post crew efficiencies for all to see. The guys that maintain good efficiencies on their properties are awarded with overtime tasks. It often becomes a competition between crews to see who performs best.”

Andy McDuff, vice president of Landscape America in Wrentham, Massachusetts, adds they share how pricing structure works with the crews. Being transparent with those numbers helps the crews to understand the role they play in the business.

“We talk to them about our budget and how we plan every winter for the upcoming year,” McDuff says. “Every crew has the budgeted hours for each job they are working on. When a maintenance crew shows up to make a property visit, they know exactly how long they have to finish the job in order to bring it in on time. If a client requests anything extra from the crew while they are on-site, they track that task separately, so it can be charged above the contracted price and won’t count against the budget hours for that property visit.”

Getting crews to care is certainly half the battle. But it’s not the only way to boost productivity. Ryan Lister, director of operations, Texoma Region, for LandCare, headquartered in San Diego, says the best tool to increase productivity is your own eyes. Observe which crews are having difficulty meeting their maintenance targets and go see what’s actually happening in the field in order to make necessary changes.

“You will often be surprised at what you find,” he says. “The first thing you should do as soon as you arrive is look for safety concerns. Nothing is more important than this. If you see a concern, address it immediately. The next thing you should look for are indirect behaviors which are costing the crew time, such as whether or not the truck and trailer are centrally parked or whether the crew is sized appropriately for the job.”

Lister says the specific details of what is taking place at the job site are important. If crews aren’t being productive, find out why and put change in place.

McDuff says they ask the foremen to always be on the lookout for small enhancement work while on a property in order to make the routes more productive. It’s important that the jobs are small so that it doesn’t add a lot of extra time.

“Every extra pile of brush or tree that we can up-limb while on-site and charge for makes our routes extra productive,” McDuff says. “We set our routes up according to geography, but also for revenue per man-hour. If we are sending out a two-man crew, we set the route up for a 20-man-hour day. The crews typically work about 10 hours per day, so if they can add an extra $25 here or there, it really adds up in terms of making the day more productive.”

Using time wisely is also important when it comes to productivity. Delong says that night prep is one of his best ways they boost productivity at Bluegrass. He says that proper planning ultimately prevents poor performance.

“Get the trucks and schedule ready the night before,” Delong adds. “The guys should roll out first thing in the morning with no wait time.”

They also have trailers equipped to handle small mechanical issues on-site so if equipment goes down, they don’t have to wait for a mechanic or a supervisor, Delong says. Avoiding downtime is huge when it comes to keeping productivity on track.

Are your crews “batching?” Lister from LandCare, says that if they are, you need to put an immediate end to it. Batching is when the entire crew is performing the same task, he explains. The problem with batching is that it is completely unproductive.

“Think of the mowing visit as making a meal,” Lister says. “If we have a large meal to make, it wouldn’t be efficient for us all to make the bread together, followed by the meat, followed by the soup, and so on. The same holds true for mowing operations.” Lister says that an indicator of batching is if the amount of equipment you have matches the number of people on a crew.

“Crews will subconsciously lead you to this if you are unaware of the inefficiency of batching,” Lister says. “If they have a three-person crew they will want three mowers, three trimmers and three blowers. It’s important to eliminate this practice.”

Of course, equipment plays a big role in how productive your crews can be. Jamie Briggs, product manager for Exmark, says crews should use the deck size that meets their customers’ property needs to be as productive as possible. Contrary to popular belief, bigger isn’t always better.

“The goal should be to use the mower size that gets the job done quickest with the level of quality that customers expect,” Briggs says.

In addition, look for equipment that has reduced, or no in-season maintenance, Briggs adds. Any equipment downtime is missed production potential, so minimize it as much as possible.

“A lot of contractors struggle to properly maintain their machines to ensure they have maximum uptime,” he continues. “That’s why, at Exmark, we’ve invested heavily in technologies that reduce or eliminate maintenance and make necessary maintenance easier to track and complete.” 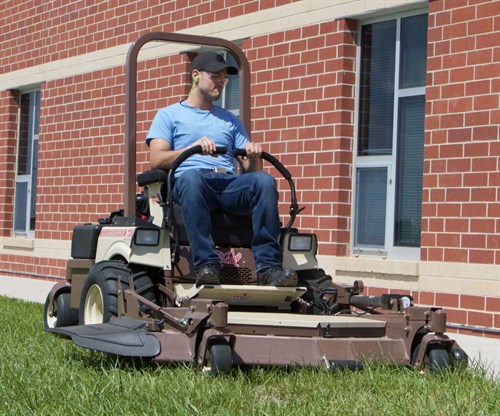 Nick Minas, product manager for John Deere Commercial Mowing, adds that selecting the right machines for the right mix of work is a key to productivity.

“To maximize productivity, it is important for landscapers to make sure they have the right tools for the properties they are mowing,” Minas says. “By working with a dealer, landscapers can ensure they are running the right equipment model for their business mix.”

It’s also important for landscape professionals to look at features and benefits that can further maximize their productivity, says Minas.

“For example, the John Deere Mulch on Demand (MOD) deck allows the operator to switch between mulching and side- discharging with the clip of a lever,” Minas says. “This eliminates time spent going back to clean off clippings from areas such as sidewalks and driveways.”

At the end of the day, most of these efforts come back to frequently evaluating where things stand with your mowing operations. In an everchanging operation such as mowing, you’ve got to be on top of your numbers and confirming that your accounts are remaining profitable. Similarly, you’ve got to stay on top of your crews and continually come up with new ways to keep them engaged and committed to being productive. As many of these landscape business owners have shown, sometimes small efforts can go a very long way in boosting productivity. 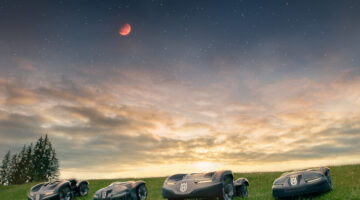 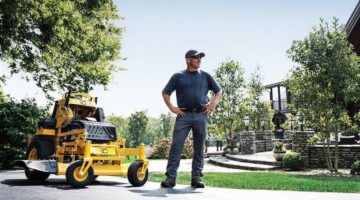 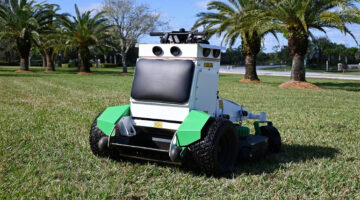