Jerome Lew and his family live in Orange County in Southern California. His community is blessed with a Mediterranean climate—warm and dry. Also like the rest of California, Orange County is water stressed. Water authorities there feel homeowners use too much water on their lawns. Consequently, they pay property owners to take out their turfgrass.

Nonetheless, Lew wanted an attractive, safe lawn for his two young children and the family pets to play on. He also wanted his home to have “the smallest carbon footprint as possible,” meaning that he wanted a lawn that required as little water and as few other inputs as possible. The fescue lawn at his home did not meet those requirements. It had to go, says Lew.

This past March, Lew ordered plugs of UC Verde Buffalograss from Takao Nursery, Fresno, California, which delivered them on pallets to the door of his home. The homeowner immediately began the lawn conversion.

“Takao Nursery has good instructions, and there’s advice on its website, so I felt I could do it myself,” says Lew. “For me, preparation was key. I got rid of the weeds. I don’t like to use herbicides unless they are non-toxic, so I cultivated the soil. I got some help there. Then I applied sea algae to the soil; it’s mostly heavy clay and needed to be conditioned.”

Lew says he planted the vegetative plugs in a grid approximately a foot apart and watered them “moderately” over a period of several weeks to get them established. The UC Verde Buffalograss started sending out runners to root into the ground within days. By mid July, about 10 weeks after planting, the buffalograss covered his half-acre property in a smooth carpet. He tells Turf he couldn’t be happier with his turfgrass choice.

While buffalograss, like bermudagrass, goes dormant (in the case of UC Verde, “semi-dormant”) and off color during winter’s shorter days, Lew doesn’t see that as an issue. Once it is established, UC Verde requires little maintenance, he explains. Lew also appreciates that the new lawn is virtually pollen free because his children suffer from allergies.

“I only water twice a week, maybe seven or eight minutes and it does fine. I’m actually thinking about cutting down on the watering,” says Lew. “The grass absolutely loves summer. It’s a really lovely grass. If you let it grow to 4 to 6 inches it sways in the wind, very pretty. Even when you cut it short, it is quite nice.”

Bred for a unique climate

UC Verde is an improved variety of the native grass found in the U.S. Plains States. Dr. Lin Wu, at the University of California Davis (UC Davis) developed the grass over a period of years. UC Davis and also UC Riverside tested the grass extensively to assess its suitability for the unique California and southern Arizona markets. The turfgrass was introduced to the market in 2003.

“Dr. Lin Wu, who is now retired, was pretty visionary. There was not as much discussion at that time about climate change, and he was looking more at population dynamics, growth in the state, the availability of water and the need for a turfgrass that required less water,” says Tom Hawkins. Hawkins and his wife, Nancy, run Florasource Ltd., a horticultural supply firm in San Clemente. Florasource sells and markets UC Verde to homeowners and contractors. Takao Nursery holds a sublicense to propagate and sell the buffalograss to homeowners. The University of California holds the patent to the grass and receives royalties from its sale.

Most knowledgeable turf experts say the future of California lawns in its populous and dry urban and inland regions lies with improved warm-season grasses, such as buffalograss and bermudagrass, which use approximately 50 percent less water than cool-season turgrasses.

Dr. James “Jim” Baird, cooperative extension turf specialist at UC Riverside, says warm-season grasses, including zoysiagrass and St. Augustinegrass, require less water to remain alive and recover than cool-season grasses do when both are put on emergency water rations. Cool-season grasses, such as Kentucky bluegrass, tall fescue and perennial ryegrass, are better suited in the northern and mountainous regions of California. Even so, fescue and bluegrass lawns are not uncommon in home lawns and commercial properties located in the state’s warm inland and desert climates.

To meet strict lawn watering rules, property owners may have to resort to “deficit irrigation,” giving the turfgrass just enough water to maintain an adequate appearance but with less growth. Or, if water becomes scarcer yet, it is often possible to irrigate to a level merely to keep the turfgrass alive until precipitation returns. For warm-season grasses this is about 30 percent of optimum, and for cool-season grasses about 50 percent optimum. Even these watering regimens are preferable to lawns converted to concrete, bare soil or artificial turf.

Letting lawns go completely brown and die is a bad idea for many reasons, says Baird at UC Riverside. He recently shared his thoughts on the vital role of turfgrass in a blog entitled “The drought needs not be a death sentence for lawns.”

“People have gone from one extreme to another. When we weren’t in a water crisis, people were watering seven days a week, 365 days a year,” says Baird. “Now, people feel like they’re doing the right thing by putting no water on their lawn at all.”

Baird, of course, is referencing the anti-lawn movement ignited this past April 1 when Gov. Gerald Brown ordered water authorities across the state to slash their urban water use. Brown took the action as California entered its fourth year of drought. Many of the state’s 400 water agencies responded to his announcement by instituting strict landscape irrigation rules. Other agencies stepped up their turf-removal programs. For the most part, water agencies are meeting (in some cases exceeding) Brown’s urban water conservation goals.

Baird, however, wonders about the ultimate cost in terms of environmental, economic and livability if property owners abandon their lawns. “A dead lawn could come back as nothing but weeds,” says Baird. 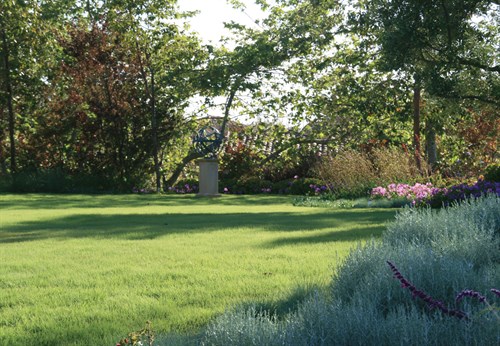 UC Verde Buffalograss, developed by the University of California, requires less water and chemical inputs to stay healthy and green.

For his part, Baird is keeping his lawn. He says he is able to maintain and keep it healthy on a twice-a-week irrigation schedule. The key is having the proper turfgrass for the climate and irrigating the turfgrass intelligently, he says.

“Turfgrass directly affects the way most Californians live,” Baird and his ANR colleagues penned in “Managing Turfgrasses During Drought,” an eight-page publication available from the University of California ANR. The authors point out turfgrass, apart from its aesthetic and quality-of-life benefits, provides the play medium on many recreational facilities, cools the immediate environment, reduces radiated heat and mitigates stormwater runoff that carries pesticides and fertilizers to waterways and provides aesthetically pleasing and functional home landscapes.

“In addition, the turfgrass industry has a significant direct economic impact on our economy and indirect impact on our tourist economy,” the report continues.