Working Outdoors and Lovin’ It

A man who wakes up early every morning and looks forward to working outdoors in a career he loves is a fortunate man. Greg Stewart says he’s one of these lucky fellows.

After serving in the military and working for an agricultural co-op, Stewart, 46, an avid outdoorsman, founded Greenway Spray LLC, which is located in Eagle Point, Oregon. “I went out on my own two years ago and I love it,” says Stewart. “The difference between working at a store and working at customers’ homes is night and day. I spend time with them and get a feel for their expectations. I even know the names of their kids and dogs.”

Eagle Point is a city of about 8,200 people located 12 miles north of Medford, the largest city and economic hub of the Rogue Valley. The Valley, located in southwest Oregon, is relatively isolated lying in the rain shadow of the Cascade and Siskiyou Mountains. The Valley’s unique climate and economy are providing Stewart the opportunity to grow a one-of-a-kind application company.

The Valley’s hot, sunny summers—more similar to the California Central Valley rather than Portland 270 miles north—offer a long growing season. The abundance of sunshine (the region gets 170 days on average annually) encouraged settlers in the mid 1800s to begin planting fruit trees. To this day, the Valley, 70 miles wide and 60 miles long, remains an important commercial pear producer and is a designated wine region, as well.

While development—especially in and around Medford—is spreading into the countryside due to a continuing influx of retirees drawn to the region because of its beauty, climate and its enviable health services, agriculture remains vital to the Valley’s economy. It’s the region’s agriculture that gives Stewart’s Greenway Spray such a unique position within the green industry.

Not only does Stewart and his two part-time employees provide residential and commercial lawn application services and structural pest control, but they also offer agricultural crop and riparian spraying.

That’s because Stewart gained much of the necessary training and some of the licenses required to provide this wide range of application services while assisting customers with their landscape and agricultural needs at the Grange Co-op. He earned additional application licenses after leaving the co-op.

“I wanted to do as many things for each customer that I could, whatever they needed. I needed to be licensed and ready,” says Stewart. “Right now, I’m focusing on balancing everything.

“When I started Greenway Spray, I thought I would be doing pest control primarily,” Stewart adds. “Now pest control is something that I add as a service to customers that I already perform other work for. I came to realize that I enjoyed working outside with grass, trees and agriculture more. My passion is plants.”

Stewart offers commercial and residential applications on an “as-needed” basis. If a property doesn’t need treatment, he doesn’t treat it.

Customers are his friends

“I go out and look at the lawns and talk with customers about them and find out what they need. Then we’ll apply what those lawns need to correct their problems. And I charge that way,” says Stewart.

“My customers are my friends. I know the name of their dogs and their kids. I get to watch their kids grow up. It’s the perfect job for me.”

Lawns in his market are primarily perennial ryegrass and turf-type tall fescue. Lawns in the Valley face the same challenges lawns elsewhere face—insects, diseases and weeds. Broadleaf weeds and nutsedge, in particular, can make lawns look ragged. Stewart uses Solitaire Herbicide for control on these properties. He says he sees results in only a few days.

Summer heat and a dearth of summer rainfall is another challenge for lawns in his southern Oregon market. This past summer the region received a total of 1.2 inches of rainfall.

“Our falls, winters and springs are generally green here. But by mid summer we can get as many as three weeks with temperatures near or over 100 degrees. Our landscapes definitely need irrigation,” says Stewart.

Rainfall or not, Stewart is growing the lawn care side of his business. This past summer he took on 4 acres of turfgrass at the Jackson County Airport.

“They had every weed under the sun. They have poor clay soils, and the pH was out of whack. Plus, they fertilized with ammonium sulfate when it was 100 degrees outside,” he recalls. After aerating the turfgrass to reduce thatch and open the soil to irrigation and nutrients, he applied an herbicide for winter weed control. “It’s been exciting to conquer the challenges of new accounts like this one,” says Stewart.

When he isn’t treating lawns, he could be providing any number of other application services in Jackson and Josephine Counties. The day Turf magazine chatted with Stewart he just finished injecting a row of struggling arborvitae trees with micro-nutrients and sending a soil sample to a laboratory for testing.

“We do a lot of ornamental spraying, conifers and deciduous trees,” he adds. “Due to the diversity of our services we are more than able to keep busy year-round. Our customers consist of farmers, young professionals in the medical field, larger estates, municipalities as well as your neighbor next door.”

Stewart and his part-time help could be treating an apple or pear orchard, or perhaps alfalfa or grass hay fields, given the season and the need. To make agricultural spraying more efficient, this past summer he acquired a GPS-guided, 14-foot boom sprayer equipped with a 30-gallon tank. 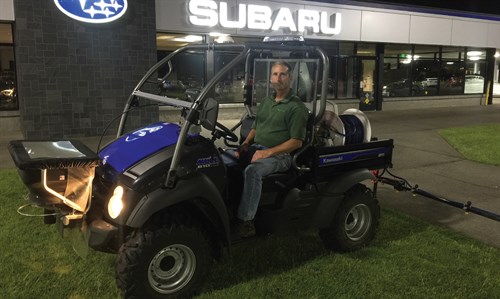 Entering the 20th Century, commercial fruit production boomed in the Rogue Valley—apples, cherries, peaches, walnuts and pears. Apples reigned for several decades, peaking with 400 growers with about 10,000 acres under production by 1910. During the 1920s pear orchards began replacing apple orchards, according to Oregon State University.

In 1910, Samuel Rosenberg purchased Bear Creek Orchards, which produced Comice pears near Medford. Comice pears are highly sought because they are sweet and juicy. Following Samuel’s death in 1914, sons Harry Holmes and David Rosenberg, having earned agricultural degrees from Cornell, began managing the company. The brothers, aggressive marketers, began selling pears first to buyers in Europe, and then to large metropolitan U.S. markets, such as San Francisco and New York.

In 1934 their Bear Creek Orchards began selling fruit mail order, and in 1946 they renamed their company Harry & David, a name many of us are familiar with today because of its popular gourmet fruit and gift baskets. The company suffered several ownership changes and financial ups and downs in the early 2000s, and was purchased by Internet retailer 1-800-Flowers in 2014.

Pear production’s acreage has dropped by half from its peak in the 1930s, but growers have more than tripled yields per acre. Urban development resulting from the migration of newcomers (especially retirees) from California and elsewhere continues to gobble up the region’s farmland. Even so, the Rogue Valley still produces 45-percent of the Northwest-grown Comice pears and about a quarter of the Seckel crop, according to the Oregon-based Pear Bureau. Other popular varieties grown in the Valley include Green Bartlett, Red Anjou and D’Anjou.

One of the most troublesome noxious weeds in the Valley (as it is throughout much of the Pacific Northwest) is the Himalayan blackberry (Rubus discolor, Rubus procures). The noxious weed is an evergreen shrub that grows to about 10 feet in height with canes covered in thorns. This invasive species of blackberry overruns riparian zones, roadsides, woodlands, open forests and disturbed areas.

Once established and left undisturbed, a stand of Himalayan blackberries form an impenetrable thicket and will replace smaller, native species and reduce wildlife diversity. It can spread via rhizomes, from fallen canes rooting at the tips and by the spread of seeds by birds and small mammals. It is incredibly difficult to eradicate.

“Yes, I do right-of-ways, brush and riparian areas for blackberries,” says Stewart. “They have taken over all of the creeks and are crowding out our native plants.

“The vegetation management aspect of my business focuses on blackberries, poison oak, riparian areas and bare-ground work. The bare-ground applications fall during the rainy season. Greenway Spray has year-round work because it is diverse,” he adds.

If you get the impression from this short article that Stewart is a workaholic, he’s not. He loves his work, but he also loves his wife Laura and his 17-year-old son Levi, and he makes time for them and for himself. While he has cut back on his hunting trips, he and his son love to test their angling skills at some of the best trout fishing rivers in the United States.

“It’s easy to get caught up in the spring rush and to over-commit. That does not serve me, my family or my customers in the long run,” says Stewart.

The only regret Stewart has in getting into the application business is that he didn’t make the move sooner.

“I have found if you are honest, show up when you say you will, return phone calls promptly and follow through on your commitments,” he says, “you can’t help but succeed at whatever you choose to do in life.” 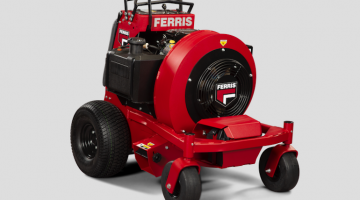 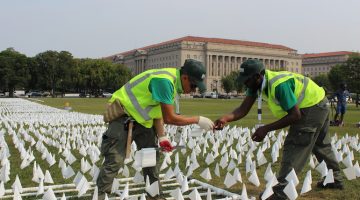