Plant breeders race to help homeowners save their lawns in the face of irrigation restrictions.

The turfgrass plant is one of Mother Nature’s gifts, and most of us are blessed to be able to enjoy the many benefits it provides us. But the turfgrass lawns we enjoy, the sports fields we play on and the green and inviting park and public spaces that make our communities so pleasant aren’t solely of nature’s making. They’ve received a helping hand from a small number of plant breeders.

Today’s crop of turfgrass breeders can thank the folks at Penn State University, who in the 1920s began improving grasses for our golf courses and parks. They can thank the late Dr. Glenn Burton at the University of Georgia’s Coastal Plain Experiment Station, who, starting in the 1940s, spent decades vastly improving the bermudagrasses that grace our southern sports fields, golf courses and lawns. They can remember the late Dr. C. Reed Funk’s four-decade efforts at Rutgers University in essentially initiating the cool-season turfgrass breeding industry. These are just a few of the industry giants who helped get us where we are today in terms of turfgrass development.

The improved turfgrasses now available show an amazing ability to deal with various environmental stressors, such as insects, diseases and drought, and still provide beauty along with environmental and economic benefits to our homes and our communities. But, like all landscape plants, we must match the turfgrass with the conditions that best suit it—right plant, right place. Every cultivar of every species of turfgrass deals with environmental stressors with a greater to lesser degree of success, data from the National Turfgrass Evaluation Program demonstrates. NTEP is the umbrella organization responsible for overseeing the collection of test results of more than a dozen different turfgrass species and several hundred different cultivars. These tests, conducted on sites across the U.S. and Canada, reveal the presence of characteristics that make a particular variety valuable for a lawn, sports field or golf course.

Drought is the biggest plant improvement challenge that researchers are working on now because of the growing realization that fresh water resources in the U.S. are finite, and authorities in some regions are asking property owners to replace or reduce the size of their lawns in favor of landscapes that require less or no irrigation.

Without plunging into the debate of lawns versus no lawns in regions of the U.S. prone to drought and water shortages, let’s briefly look at work underway to produce turfgrasses that provide the benefits people seek from their lawns while requiring significantly less irrigation than previous generations of grasses.

Turfgrass breeders are a persistent, patient and stubborn group. It comes with the profession.

Researchers led by Drs. Wayne Hanna and Brian Schwartz at the University of Georgia in Tifton, Georgia, have been testing TifTuf Bermudagrass since 1993. The process of discovering and winnowing grass with traits and characteristics that are both beneficial and marketable can be decades long and is filled with many dead ends. The UGA researchers selected TifTuf from a pool of more than 27,000 potential cultivars.

TifTuf’s potential as a water-conserving grass caught the attention of the researchers during Georgia’s historic drought of 2008-2009.

“That was a dry year, and I remember TifTuf keeping its green color while a lot of the other grasses were turning brown. That was when I began trying to figure out why it was so drought-tolerant,” says Schwartz. “After three more years of field research in two different soil types, we found evidence that TifTuf was using less water than Tifway 419 and TifSport. This was exciting.”

Through an agreement with New Concept Turf and its licensing and marketing agent, The Turfgrass Group, TifTuf became available for sod production with limited foundation material ready for planting this summer.

Precisely 2,844 miles northwest to Albany in Oregon’s Willamette Valley, the Turfgrass Water Conservation Alliance (TWCA) is now in its fifth year. It describes itself as “an unbiased, independent foundation whose No. 1 goal is water conservation focusing on live plant material.” In addition to its four founders—Pennington, Pure Seed, ProSeeds and Turf Merchants—TWCA now includes other seed and sod companies, university researchers and 20 government entities.

To date, most of TWCA’s efforts have been directed at identifying, testing and bringing water-conserving, cool-season turfgrasses to market.

The TWCA testing program is independent and separate from the NTEP and other trialing programs. “Not only do we strongly encourage outside trialing; we require it,” says Jack Karlin, program administrator. “With a minimum of two years’ pre-trial data required from verifiable sources, many varieties in the TWCA program have been trialed in the Cooperative Turfgrass Breeders Test or the NTEP. This pre-trialing requirement ensures the varieties entered into the qualification process maintain acceptable turf quality.”

The release of the new water-conserving TifTuf hybrid bermudagrass from the UGA breeding program and the research efforts of the TWCA are just two examples of the accelerating work to find, develop and commercialize turfgrass varieties that can survive and remain acceptably attractive to property owners while, at the same time, meet communities’ increasingly stringent irrigation regulations.

While plant breeders are constantly making progress, the process itself is slow—at least in relation to the pace of today’s business world and consumers’ expectations. The challenge to keep the turfgrass industry healthy is huge, and it will require education and technology to keep the industry from shrinking in rapidly developing regions of the country prone to periodic droughts.

Next post Summit Holdings Announces the Acquisition of Frontier International 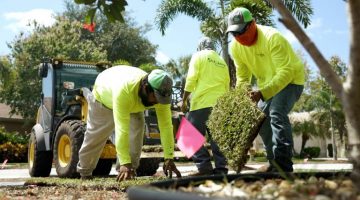