For a central Wisconsin vacation home, Paul’s Landscaping of Vesper, WI designed a block retaining wall to replace a failing railroad tie installation. Including a turret in the design sealed the deal for this prize-winning project.

The desire to beautify a space or make it more usable are two common reasons homeowners call in a landscape contractor. However, for vacation-home residents of the central Wisconsin community of Nekoosa, their need was more pressing — they wanted to save the back of their house from collapsing.

Mark Paul, owner of Vesper, WI-based Paul’s Landscaping, estimates the owners had no more than 18 months before their deck and back of the house collapsed. The culprit: a railroad-tie retaining wall system installed in 1994 which was falling apart.

“The sand was leaking through it; it was failing miserably,” says Paul. “The pavers that were under the deck were sinking, and the whole thing just wasn’t doing the job.”

Paul explains that the jobsite is located just outside Nekoosa on Lake Arrowhead, a manmade lake surrounded by drumlins left from the last Ice Age. There’s approximately a 20-foot difference between the level of the home’s driveway and the lake, with the home built into the side of a drumlin. The home features a walk-out basement, with a deck built on the same level as the driveway.

Paul was brought in by the company that does landscape maintenance on the home.

“The owners talked to their maintenance people about it, and they recommended me because we specialize in patios and retaining wall work,” he says.

While their main goal was to save the back of their home, Paul adds that the owners were also looking to enhance their backyard experience. They wanted a larger patio area under the deck, as well as a firepit area.

Simply getting to the worksite proved to be a challenge.

“Luckily, there was a neighbor who had a driveway going down to the lake between the two properties that allowed us to bring materials and equipment through there,” Paul says. “As it was, we had to do a lot of repair on the driveway and the lawn area when we were done.”

However, removing the old timbers and hauling them away proved to be easy compared with what Paul says by far was the most challenging aspect of the job. The 50-foot wide deck was supposed to be supported by nine 6″ X 6″ posts set on concrete pylons, but by that point that wasn’t always the case.

“Because the wall was failing, the ground level had sunk about three inches and was moving away from the house,” Paul explains. “We had to prop the deck up with temporary bracing so we could dig out the old pylons and pour new ones. The deck then had to be releveled and the posts replumbed because they were no longer straight up and down.”

Paul and his son, Eric, who is also his crew chief, engineered the job, and the senior Paul says he’s only had one other, similar job in his almost 30 years in business, and it was much smaller than this one.

While the failing timber retaining wall was part of the culprit, drainage also played its role in leaving the deck in perilous condition. Paul says originally the downspouts were run onto the pavers under the deck with the hope the runoff would simply run over the sides of the patio. Instead it undermined the patio, a situation the contractor didn’t care to repeat.

“Instead, we had to run all the drainage from the downspouts underground and under the patio to get the water away from the project,” he says. “Surface water is not our friend when it comes to retaining walls, so we had to move all the water away, and because it’s a large house there was a lot of water coming off the roof.”

“County Materials recommends you don’t go any higher than eight courses before you step back,” Paul says. “We ran geogrid every two courses, but the other reason for the terracing is so the stairs would have landings.”

The stairs were built from the same block, and capped with County Materials caps, while the patio incorporates the company’s Elements™ pavers.

However, the job’s crowning touch is something out of the ordinary. Challenged to come up with a place for the clients’ requested firepit, Paul explains he designed something he calls “the turret,” which gives the job a special look.

Set off from the patio about 10 feet above the grade of the lowest terrace, the turret is 20 feet in diameter and contains both the wood-burning firepit and plenty of seating all resting on County Materials’ Destination flagstone-looking pavers.

Normally, Paul says he would have included a seat wall with the firepit area, but it’s high enough to require a railing. He adds that the turret is his favorite feature.

“The homeowner just asked me to design a new wall,” says Paul. “He didn’t say anything about a turret. That was just something I came up with, but it gave the job a special look that really sold the project to the homeowners.”

The project is further set off by a mix of low-voltage lighting and was recognized by Hardscape North America (HNA) in 2018 for honorable mention in the segmental retaining walls – residential category.

To finish up the job, Paul says he called in Fencil Landscaping of Wisconsin Rapids, WI, to come in and help repair the landscape around the home.

“They redid the lawn area and rebuilt the driveway along the neighbor’s property,” Paul says. “We planted shrubs on the terraces, and we did the landscape along the walkway coming down from the main level. A lot of it was refurbishing it and making it look better than before we came.”

The company’s four-man crew spent two months on the job, which cost the homeowners about $150,000. However, Paul believes for them it was money well spent.

“They were probably about a year-and-a-half away from having some major damage done to the house,” he concludes. “It would have cost much more than that to have fixed it.” 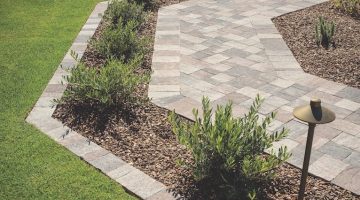