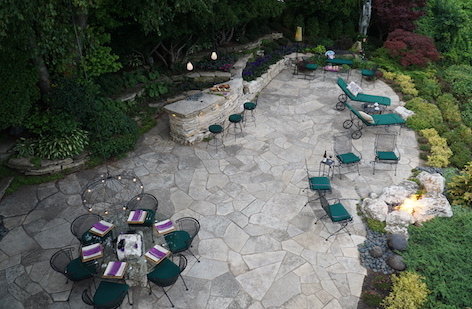 With Hardscape North America (HNA) right around the corner, Joe Majerus, owner of Sheboygan Falls, WI-based Landmark Landscapes, Inc., knows it will be hard to beat last year’s experience. In 2018, Landmark won HNA’s award for best use of natural stone in a residential or commercial project. The project, incorporating innovative and aesthetic use of limestone found on the property, as well as Mexican beach pebbles, and a seemingly suspended chandelier, was an evolving plan that continues to be enhanced by side projects.

The six-figure project was one any landscape design/build firm would love. The property sits on a bluff overlooking Lake Michigan, and Landmark had previously built a grill area adjacent to the kitchen featuring a dry-stack bar. But Majerus, who sees his role as one of building relationships, initially met the client through their neighbors. “This was a word-of-mouth referral,” he says. “We had done work for their neighbor to the north, the neighbor to the south and the neighbor to the west. We just encircled them.” Majerus says it was nearly preordained his company would take on the job.

Majerus describes the home as a mid-century modern with a limestone façade that was built around 1960. Subsequently, when his company was called in to work on the second phase of landscaping for the property, it wasn’t starting with a blank slate.

“There [was an existing] garden terrace that [was] part of the original design, but it was never carried out very well,” he says. “It had some inherent engineering flaws, and drainage had become a really big issue. Over the years, it had failed, and the overflow was eroding the bluff.” As a result, the first thing Majuerus did was bring in an engineer to ensure the owners’ problems could be addressed by collecting the runoff. (The drainage itself is now collected in an 8” pipe run from the street below and carried into the municipal storm system.)

But the job entailed more than just addressing the drainage and erosion. The clients also wanted the space to be more usable and enjoyable for entertaining. “They wanted to have some sort of fire element, and we wanted to include some outdoor entertaining elements,” says Majerus. “We didn’t know exactly what those were going to be when we started the project. We had the idea for a built-in bar of some sort, but we weren’t sure exactly what it was going to look like.”

Majerus adds that the entire project was somewhat fluid. Not only were the clients often involved on a day-to-day basis, but he admits the work started without a real end-plan. “We just gave ourselves over to the project and let it evolve,” he says. “That’s not something we’re really used to.”

Majerus believes that was probably the most challenging part of the project, and Brian Biller, his director of operations, says it made scheduling crews for the site difficult as well.

The Beauty Of Limestone

Yet despite the unfolding plan, the designer opted not to throw the baby out with the bathwater. After establishing the outlines of the new terrace, Majerus estimates around 50% to 70% was already in place. “We ended up adding on to it,” he says. “We repurposed a lot of the original stone. It’s almost all limestone, and eroded limestone at that, with a really interesting texture in colors that range from almost stark white to a creamy buff.” To provide contrast in both color and texture – and help with the drainage – he then incorporated Mexican beach pebbles in black.

Expanding the terrace to its current 1,400 ft2, required obtaining additional limestone from both conventional and unconventional sources. The conventional source was Eden Stone Company of Eden, WI. “We were actually able to source some eroded limestone from a local farm field about six miles north of our shop,” adds Majerus. “We found these giant boulders and Eden also helped do a little bit of forming of those.” 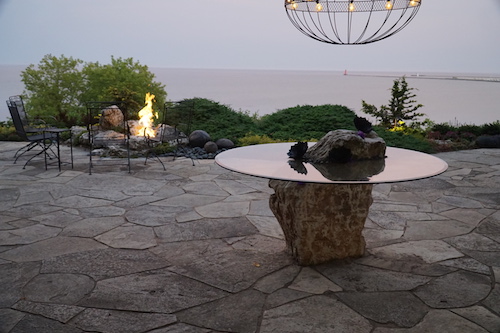 The stone company’s expertise was particularly called into play creating what Majerus says is his favorite feature of the project. “We used about a 4,000-pound eroded limestone boulder to build a glass table,” he explains. “We had Eden Stone cut off the top of the boulder, set it on a footing, put a six-foot circular tempered-glass tabletop on it and then put the other half of the boulder on top of the glass, so it appears the glass goes right through the boulder.” 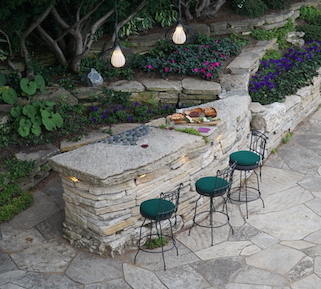 “Found” limestone also inspired the terrace’s other main feature. “About half way through the project’s construction, we ended up discovering some giant slabs of limestone from the original landscape buried in the garden,” Majerus says. “As we pulled them out, we realized they would create the perfect bar top, which we hadn’t yet designed.” The result was a dry-stack bar on the edge of the patio, which flows into an 18” seat wall bordering the back side of the patio. To make the bar more functional, it includes a custom-built storage cabinet for a garbage can and bar accessories.

And, tying it all together is the Mexican beach pebbles. “We used them to fill in the gaps in the bar top to make it level enough to use,” he says. “We also used them to tie in the drainage features so you can’t see any of the drains throughout the terrace. We also used them in the firepit, which protrudes from the garden in a stone outcropping designed so you don’t recognize it’s a firepit unless the fire is on.” 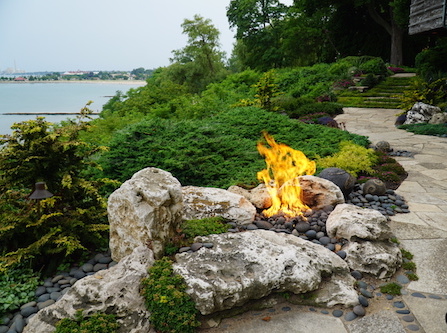 To further enhance the dining experience at the unique glass boulder table, Landmark also engineered a chandelier that hangs over the tabletop. Majerus explains that it suspends from a stainless-steel cable stretched from the roof of the house to a birch tree at a height of 35 feet. He describes the result as “magical.”

“It’s hanging right over the table with no apparent structure over it,” he comments. “It’s a giant orb that’s lit and sways in the wind. It’s quite cool.”

Beyond the hanging chandelier, lighting for the terrace utilizes approximately 46 fixtures, including mood lighting and accent lighting on the landscape around the terrace; path lights for the walkway from the back of the house, and architectural up-lights, all from FX Luminaire. 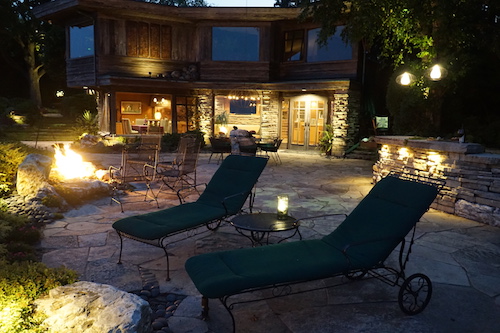 “I like them because it gives us really good control of the temperature of the lights,” says Majerus. “It’s a low-voltage system set up on a transformer that’s controlled by a switch in the house.”

Landmark’s efforts in terms of softscape for the project were limited, since the clients are enthusiastic gardeners who did a lot of the work themselves. “Our work had a lot to do with the preparing the soil and the planting beds,” he says. “We gave them good spaces for what they wanted to do.” 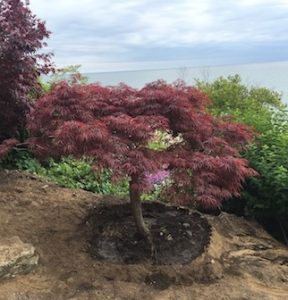 Biller, the operations director, adds that from his perspective, one of the most challenging aspects was moving two 20-year-old Japanese maples that were on the property. “They’re a slow growing specimen tree, and the clients didn’t want to lose them,” Biller says. “We were able to root prune and pick them up and get them moved, and both successfully as far as I know.”

Work began on the six-figure project while there was still snow on the ground, and while construction on the terrace itself had to be wrapped up by Independence Day, the job continued into August as the company did some work around the front and on the softscape.

And Landmark Landscapes continues to have a relationship with the clients. Last year, a meditation garden was installed on the other side of the home. It incorporates a water feature, more limestone boulders, ornamental dwarf evergreens, and intricate paving with reclaimed materials. The final part of the project, a small space at the back of the house, was still in the design phase as of this past March.. Plans call for a Japanese-inspired garden with a reflection pool housing an island featuring a bonsai tree. Whether it, too, will be an award-winner is yet to be seen, but it will likely reflect the same qualities that earned the original project esteemed recognition from HNA.

“I love the artistic elements that we put into the terrace,” concludes Majerus. “Every last detail was thought out, and everything is coordinated. The rhythm, and the repetition, and the unity of the material is fantastic, and the craftsmanship is just absolutely astonishing.”