Story Of A Landscape: Installing A Movable Hardscape For A Commercial Client

A unique property situation required this contractor to think creatively about a hardscape installation on concrete.

When Church Mutual Insurance Company, the leading insurer of worship centers and related organizations in the United States, outgrew its headquarters and a secondary location in Merrill, Wisconsin, it opted to utilize a second office facility in the community’s former Walmart building.

While the building offered plenty of space inside, it had some distinct challenges outside for Carey Owen, owner of Colorscapes by Carey, who was called in to upgrade the landscape. 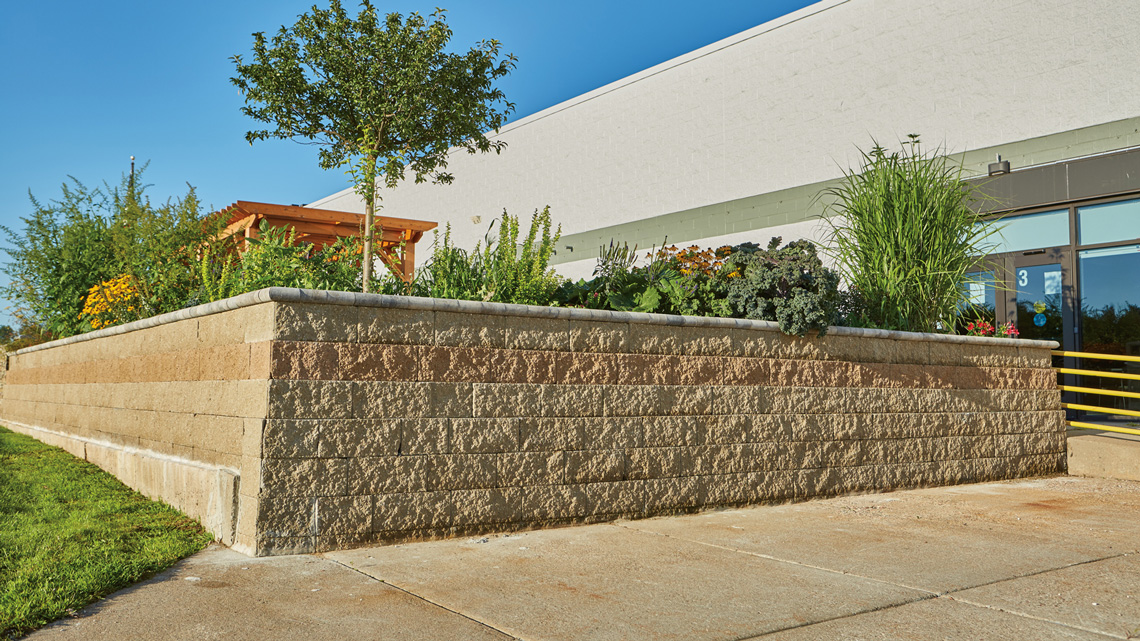 The biggest challenge: because Church Mutual is only leasing the building, nothing that couldn’t be removed could be installed on the property. That the project has been recognized by both the Wisconsin Masonry Association and Hardscape North America, which cited it for its use of a combination of hardscape materials on a commercial project of less than 20,000 square feet, gives some indication of how well she succeeded.

Owen, who only recently relocated her business to her hometown of Racine, Wisconsin, four hours south of Merrill, explains she got the job because she’d worked previously on landscape projects for Church Mutual and had a good relationship with its facilities manager.

“Walmart had built a whole new building,” she explains. “Church Mutual wanted to utilize the existing space and revamp it into something that was usable and work-environment friendly. Their focus is on their employees’ well-being and making things environmentally pleasing. 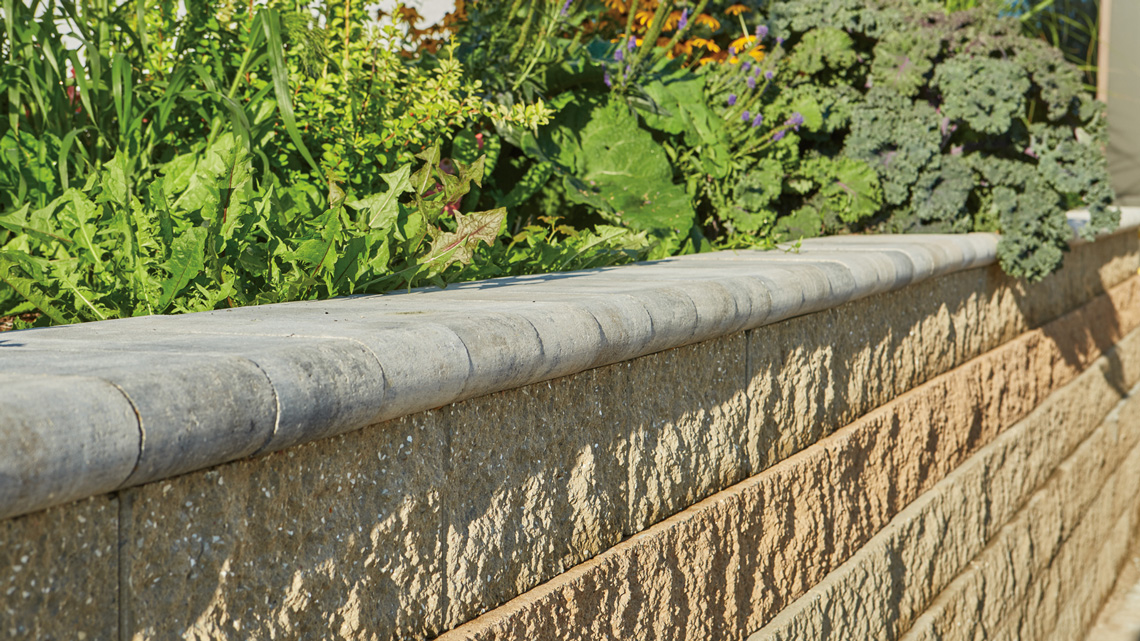 “What they wanted to do was create a space where the employees could go outside and enjoy the outdoors and have something appealing to everyone.”

While the inside offered the company space for more than 150 employees, because the site was being leased, the building’s footprint could not be altered and no physical changes to the surrounding property were allowed.

Ultimately, that meant Owen was constrained to repurposing what had been the outdoor garden center while coming up with a design that allowed Church Mutual the option of removing the landscape materials if the company was ever required to move. 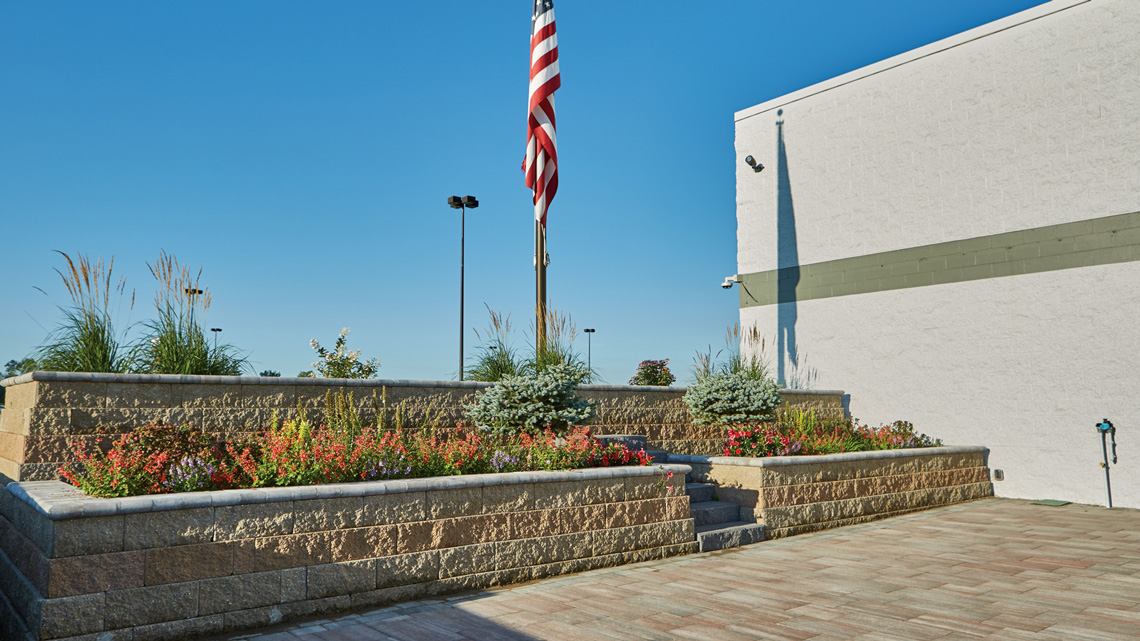 That left Owen to contend with a cracked and broken concrete pad that couldn’t be removed because of an easement with a pipeline company that runs through the property. That easement proved to be particularly burdensome because it pushed the start date for the renovation to almost Halloween of 2015.

“We didn’t find out about the easement until we had already started on the project,” Owen says. “We had gotten about three days into it when the pipeline people came over and said, ‘We’ve had no discussion on this,’ so we were delayed about six weeks. Fortunately, the weather held out a little longer than usual.”

The approximately 4,500-square-foot project began mortaring the base layer to the existing concrete and grinding off some poles that had been left in the former garden center.

Assisting Owen with the actual construction was Rhinelander, Wisconsin-based PICS, Inc. Owner Steve Cooper advised on repairing the concrete, and then utilized Landscape Step Units to create a border for the paver section. 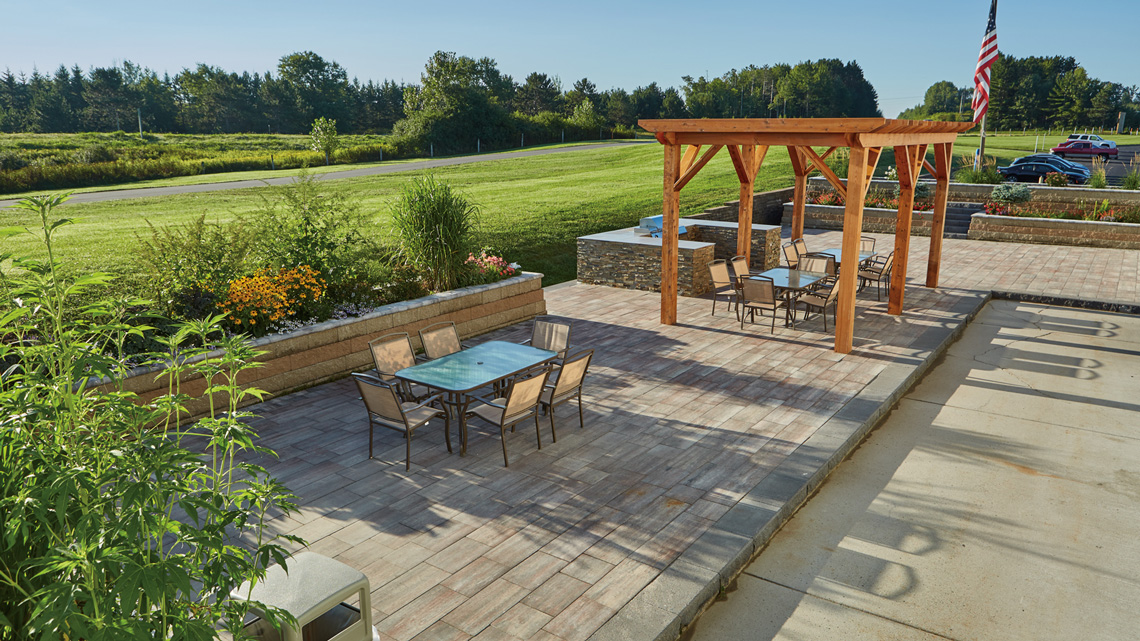 “Every piece had to be leveled with mortar,” Owen says. “It was crazy how much work went into just mortaring the first layer down.”

Once that was in place, a base layer of aggregate was filled within the border. Owen explains that it contains both the irrigation system for the planters and electrical for lighting. It also allowed the area to be pitched away from the building for drainage.

Supplying the project was County Materials. That was a decision of the Church Mutual facilities director, Owen says. The pavers are from the company’s Grand Milestone Paver line in its Serenity color to add warmth to the area, and installed in a running-bond pattern.

“They’re big pavers,” she says. “We had to use air tools to move them into place, and we couldn’t have them teeter-tottering because they’re such large pieces. It was a tricky situation because we had only six inches to get our sand, base, drainage and irrigation system in there and the pavers, as well. There were some tight tolerances for depth.” 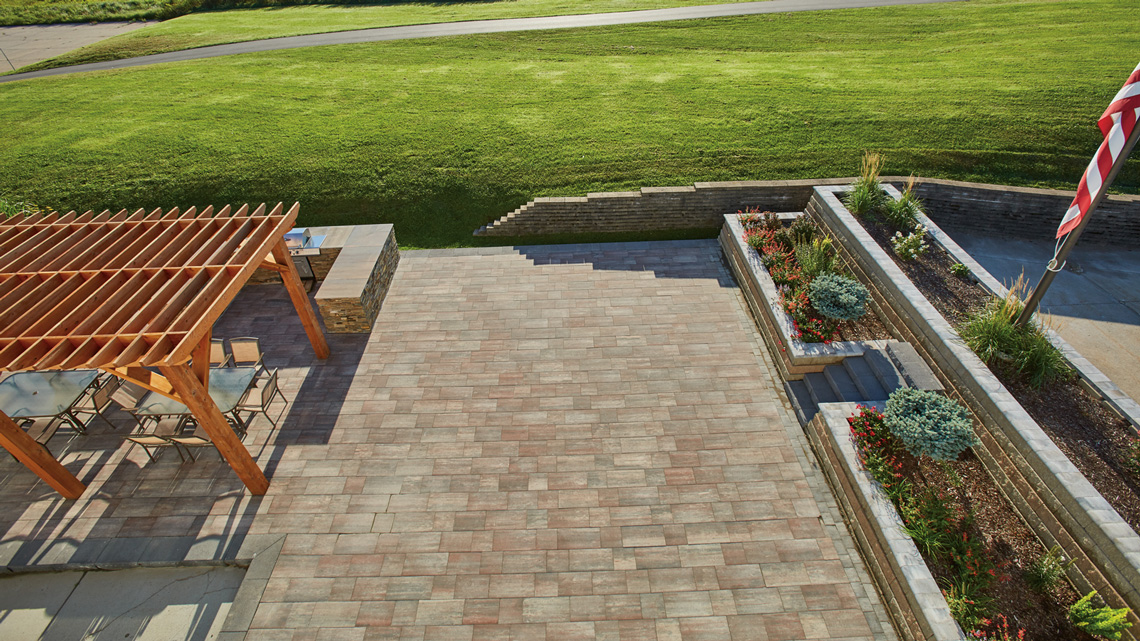 Concrete was also the answer to part of the six-foot retaining wall that separates the new area from the parking lot.

“This abutted the parking lot, and when the snowplow goes to clean up and hits a retaining wall, it’s not pretty,” Owen relates. “It pretty much explodes. We couldn’t mortar them in, but we filled in the first three layers with concrete.”

The retaining wall serves several purposes. Its height is helpful in keeping out blowing trash from a nearby fast-food restaurant, Owen says. And, since the side opposite the parking lot was built as a multi-tiered planter, it provides visual interest for employees utilizing the outdoor area.

The wall is constructed of County Block Retaining Wall System Jumbo Units in a Buff color, with darker Brown utilized for accents. Charcoal Landscape Step Units give access to the second layer of the planter and for raising and lowering a United States flag.

On the other side of the space, a single level planter wraps around the corner to help enclose the area. The entire wall system is capped with a Crest Bullnose Paver in Timeless. 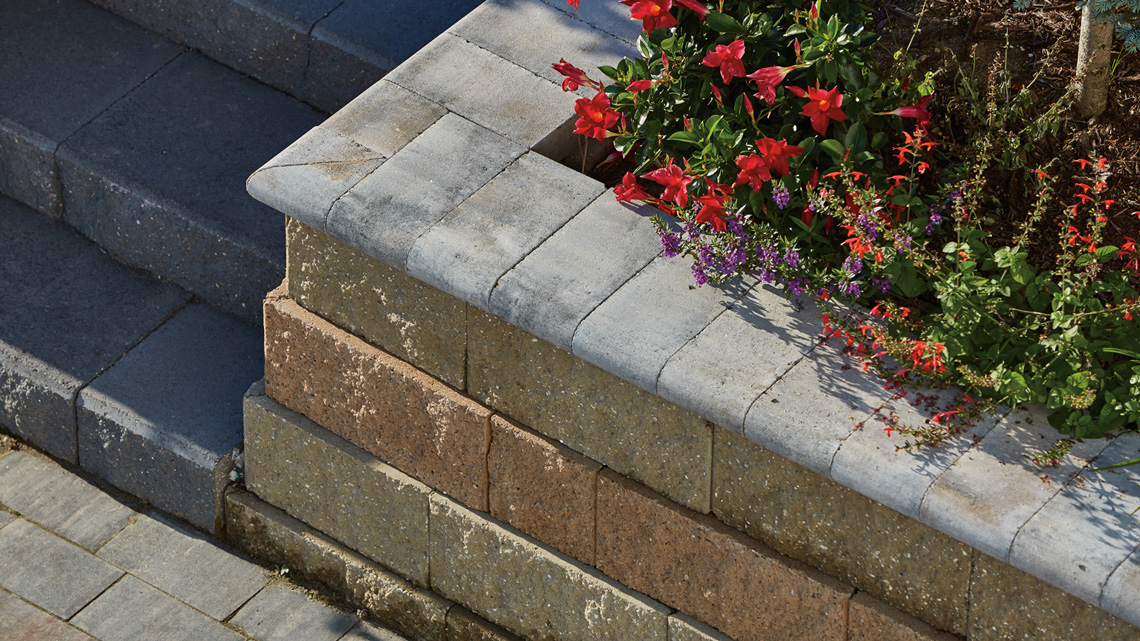 In between the two planter areas is an outdoor grill and serving area, and a pergola for company events.

“The grill is also from County Materials, and Church Mutual wanted the kitchen area large enough so there were food prep areas and space to serve a buffet,” Owen says. “The pergola was built by the staff at Church Mutual and installed prior to us putting up the grill area.”

The grill also provided a learning experience for Owen.

“I learned you can’t mortar veneer in the middle of winter,” she says. “It took us (herself, two men from PICS and two of her own crew), about four weeks to do the rest of the job, but we had to go back in the spring of 2016 and finish the grill.”

However, even building the planters was a challenge because of the area’s cold winters.

“We had about three feet of soil and the remainder is drainage (via a geogrid),” she says. “It was important that the water not freeze in the planters and we could avoid frost issues.” 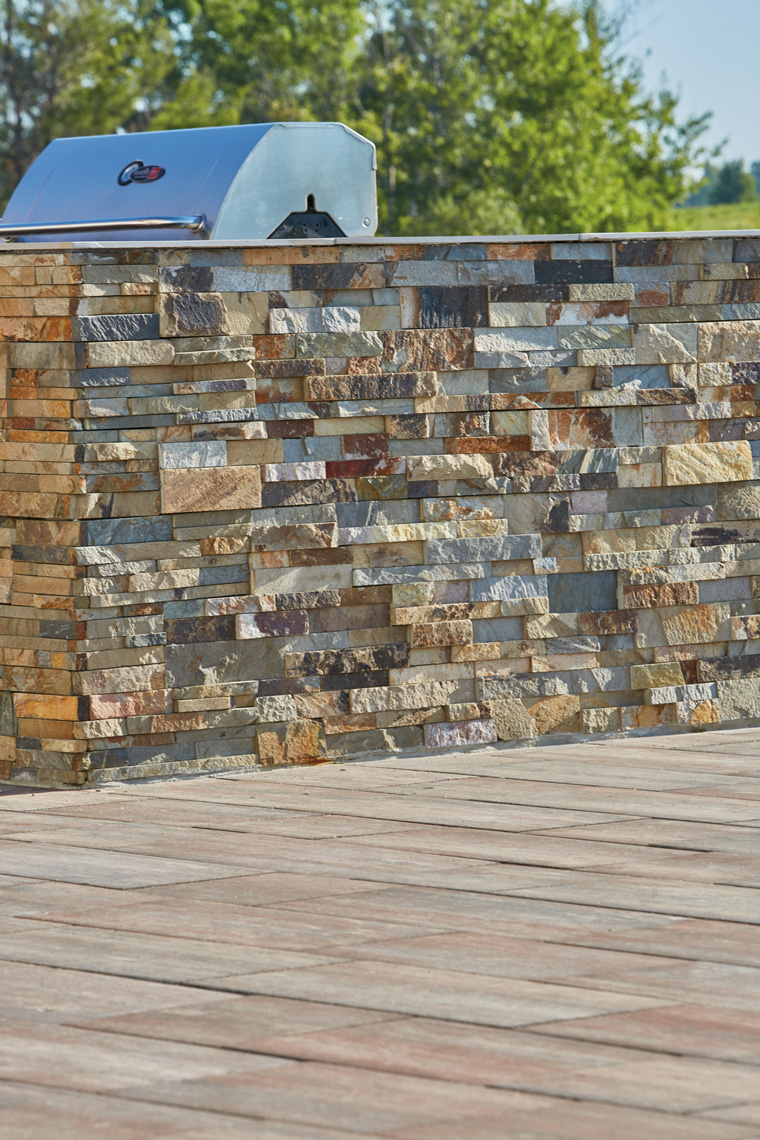 The planters contain a mix of perennials for seasonal color, small shrubs for winter greenery, and some 700 bulbs. There’s also an area where employees can grow herbs for company cookouts.

Owen admits to being more than thrilled with the plaudits this project has garnered, especially because she’s not a trained landscape designer.

“This is just simplistic and tailored to what they were asking for,” she says. “They wanted clean lines to go with the clean lines of the building and they went with a very European look for cleanliness. I’m especially pleased that I got to create the plantings.”

Still, she says her favorite feature of the $300,000 project is the grill and its Norstone Ochre veneer. 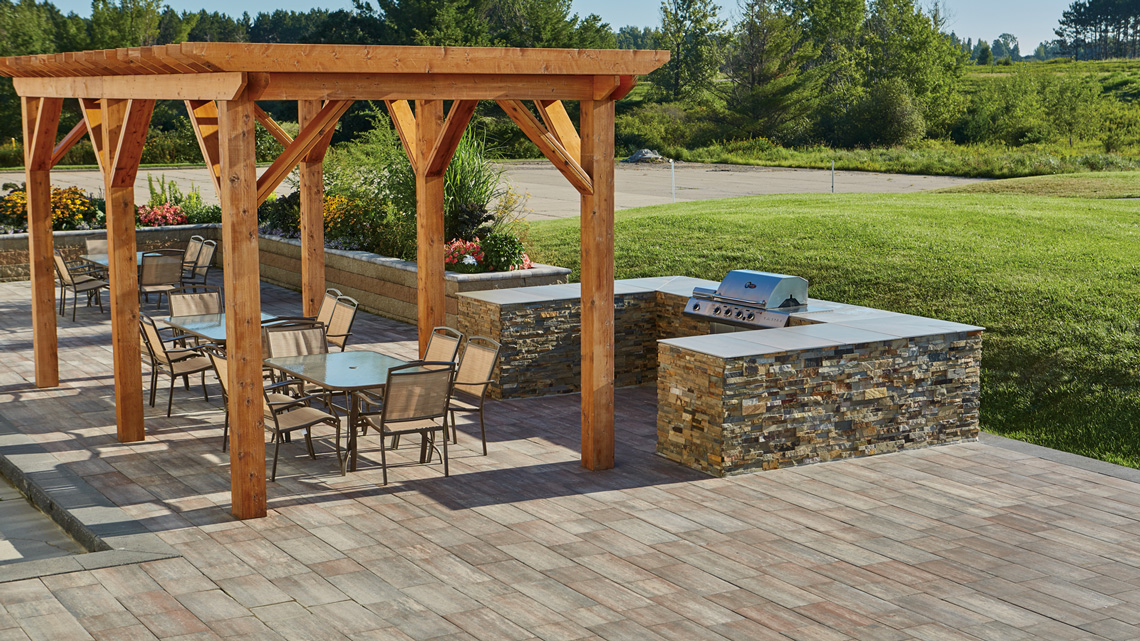 “The coloring of the pavers is more in the earthy tones to blend in well with the area,” Owen says. “The Ochre veneer provides a nice contrast, but it’s one of several things I had to think through.”

Not surprisingly, asked about her biggest challenge with the project, Owen goes back to that concrete pad. But, she says, it also provided its own learning experience.

“Who builds retaining walls on concrete that you can’t rip up?” she asks. “I can understand if it was a beautiful, level concrete pad, but this was just a piece of junk.”

Ultimately, though, Owen recognized she’d have to work around it — and she did.

“Even if there are obstacles involved in a project, with patience you can overcome them,” she says.