This multi-phase job in Wisconsin replaced wood with permeable pavers.

How much can a good supplier do for a landscape company? Well, if you’re Shawano Lawn and Stone, it took a persistent salesperson for County Materials Corp., to recognize that the three-phase project the company did at a vacation home some 15 miles outside of town was award-worthy.

Shawano Lawn and Stone owner Pat Bohm says he’d even forgotten the project had been entered in a competition for the Wisconsin Landscape Contractors Association until he received an email telling him the job had won an award.

However, the WLCA judges weren’t mistaken about the project’s merit and it went on to earn honors at Hardscape North America (HNA) in the category of concrete paver — permeable — residential. 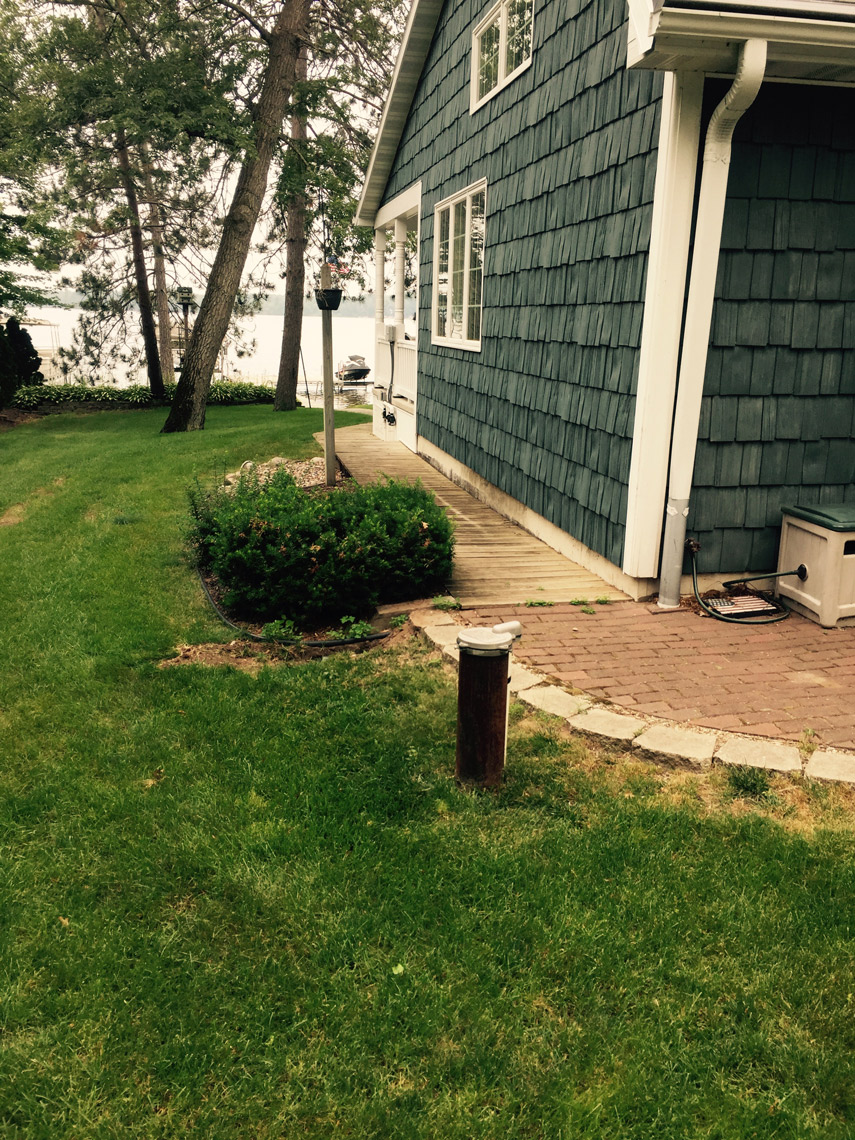 Before, with the wooden walkways. Photo: Shawano Lawn and Stone

Bohm explains the job began in 2013, after a friend who does lawn maintenance recommended Shawano Lawn and Stone for a hardscape project job the property owner was contemplating. Bohm describes the property as a higher-end vacation cabin on a northern Wisconsin lake.

“The cabin is nothing to scoff at,” he says. “The only thing is that it’s unusual to see a Cape Cod-style home in this area. It looks like something you’d see on the East Coast.”

The first thing the client wanted was a fire pit.

“He wanted an area to have campfires, so the first thing we did was a circular firepit, probably about 20 feet from the lake,” Bohm says. “Because of the proximity to the lake, we’re required to do permeable paving brick according to county regulations.” 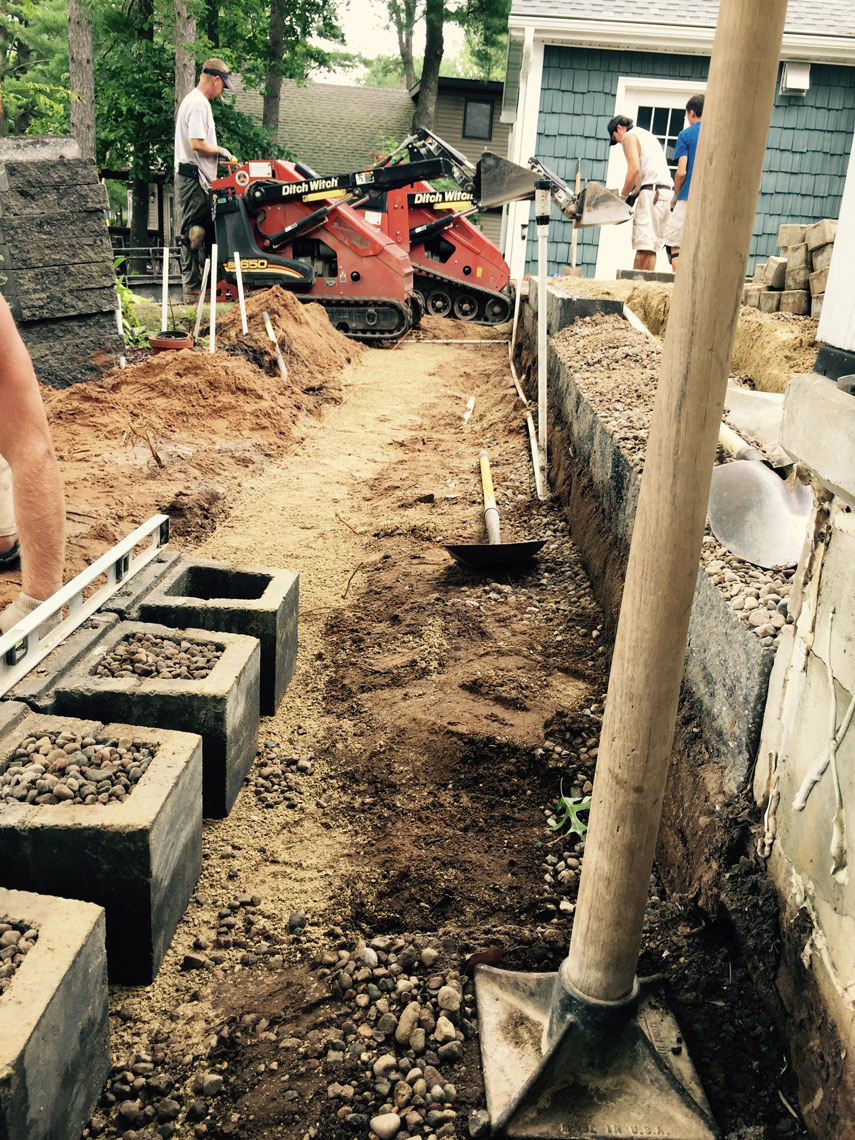 The client chose County Materials’ H2O Pro Pavers in Vision (white), bordered by the line’s Reflection (gray) color. The 4 by 8 pavers were set in a herringbone pattern.

When the client bought the property, as Bohm puts it “he inherited other people’s landscaping,” and he wasn’t necessarily sold on the wooden walkways around the home or the badly deteriorating deck on the back.

“The second year, we began taking up the wooden walkways and replacing them with permeable paving brick,” he says. “Then, we tore off the deck — and underneath that deck was another deck — and replaced it with a raised brick patio with a stone seating wall around it.” 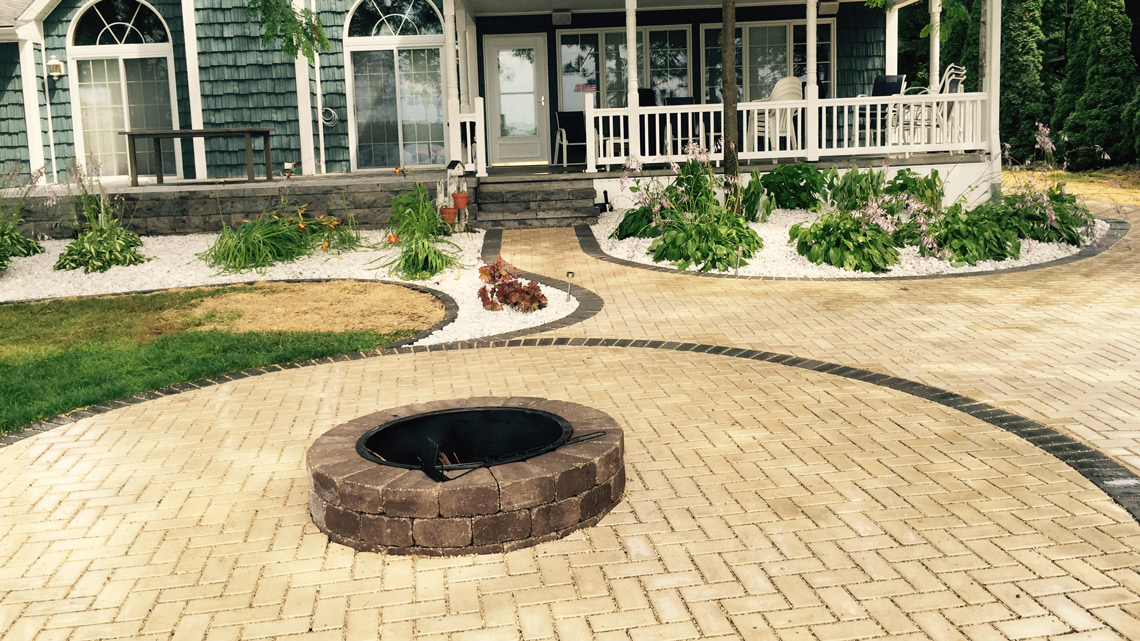 Again, Bohm’s crew made certain to properly design the base materials and aggregates to ensure the system properly captures and filters storm water and effectively prevents runoff to protect the lake’s water quality.

Initially called back to the property for a third year in 2015 for what was supposed to be work on the cabin’s landscape, Bohm found himself with an unhappy customer — or rather the customer’s wife.

“We came back, and he said, ‘Pat, the patio that you did is too small; my wife wants it two feet bigger,’” Bohm relates. “I realized he was getting pressure from his wife, but I asked if he realized how much work would be involved in making it two feet bigger. He said, ‘You’ve got to make it bigger, and I’ll pay you every penny it costs to tear out what you did last fall and redo it.’” 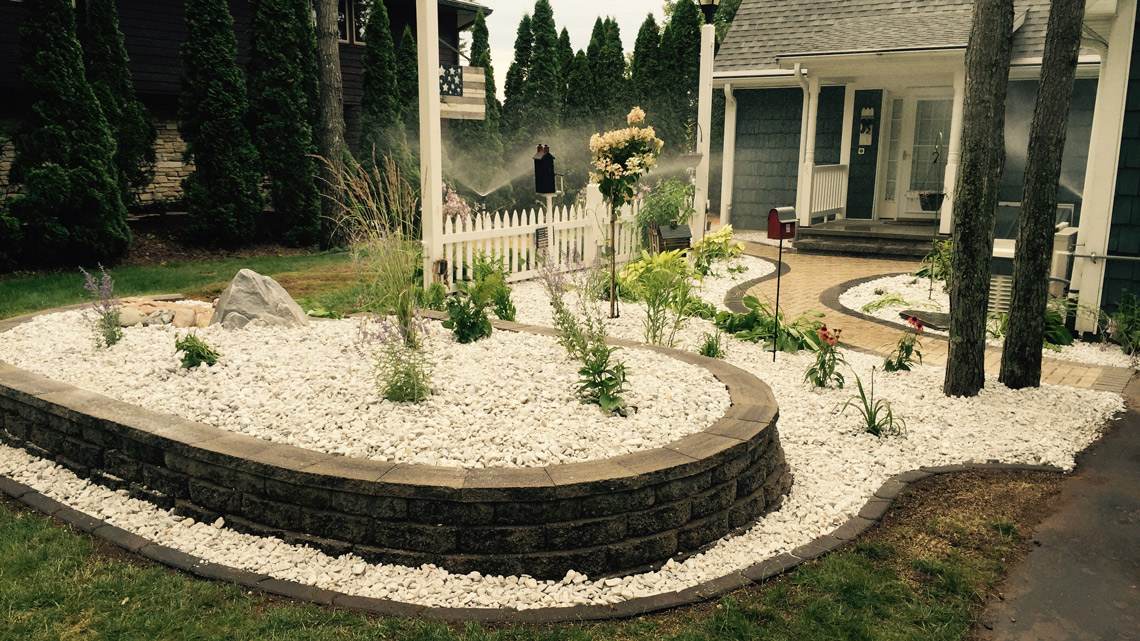 Bohm estimates the finished patio now measures 14 feet by 30 feet. However, the size wasn’t the only problem the client’s wife had with the installation.

“She ended up not liking the seating wall, so we put in white vinyl railings when we redid the patio,” he says. “She also regretted not taking a closer look at the material we’d used on the raised patio, so rather than using the 4 by 8 bricks, we laid down 8 by 16 pavers, in the same color scheme, also in a herringbone pattern.”

Nor did the bricks that had been used in the first patio go to waste.

“We reused it as part of the job taking up the wooden walkways,” he explains. “We repurposed it in that area because it had only been laid for six or seven months. It was just less brick we had to order.” 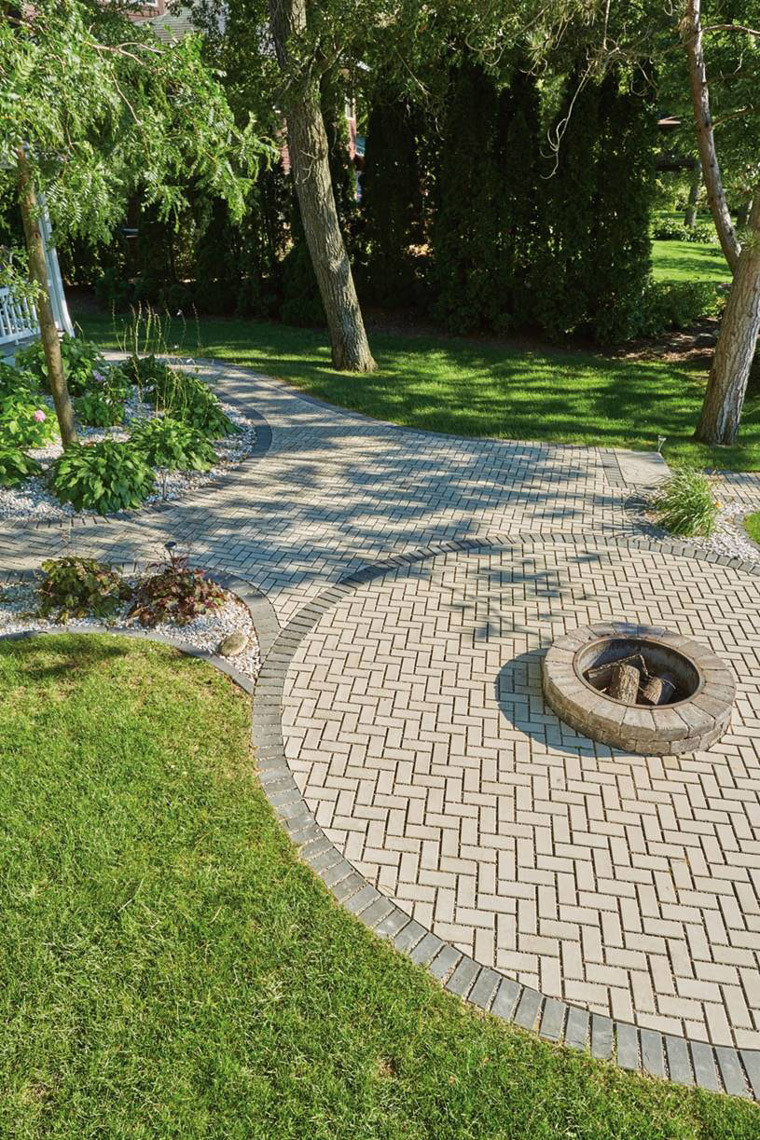 In the end, Shawano Lawn and Stone ran a paver walkway from the front driveway to the backyard, widening out as it meets the patio and fire pit, adding space in that area. A roadside courtyard was also constructed of pavers off the walkway in the front yard.

As for the landscape project the company had initially expected to do the third year, that happened, too.

“We redid all the planting beds around the house,” Bohm says. “The client’s wife had a pure white marble shipped in from Georgia that went around the house. Because it’s a dark blue — almost to a green — color of siding with white trim, it looks really cool.” 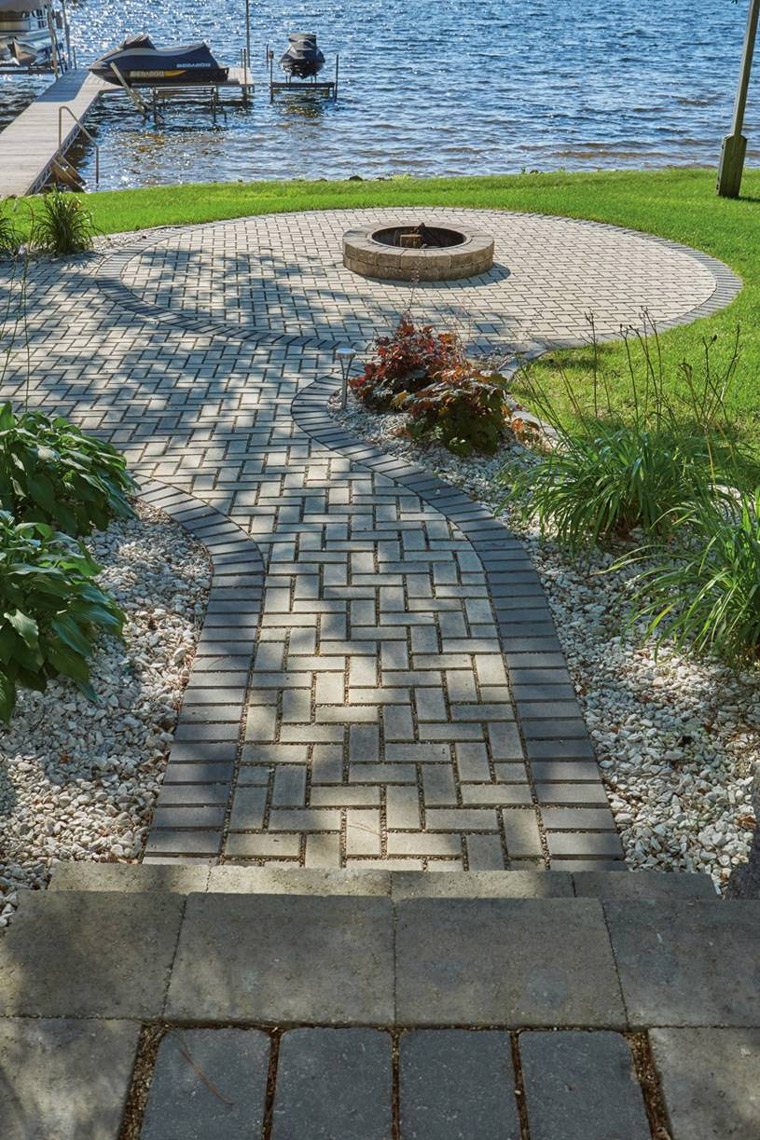 He says each of the three phases cost the client between $10,000 and $15,000, and each took a double crew of men about a week to complete. Currently, the company is also maintaining the property.

It might have been the first piece of the project, but Bohm says his favorite feature is the fire pit.

“It’s a fun thing,” he says. “In this case it’s a grandpa wanting to create a place for the kids and grandkids, but there’s a lot of boating around here, and when I motor by a place where I did a patio or an outside living area and see people having a fire and socializing, it makes me feel good that they’re using it and enjoying it.”

With a flat lot and permeable pavers handling the drainage, he says his biggest challenge with the project was the client – but not for the obvious reason. Because the customer is a busy businessman, Bohm says rather than having too many meetings going into the first phase and too much micro-managing, he was quite the opposite.

“I’m not sure the customer and I even met onsite,” he says. “In the early stages, I was a bit unnerved because I was being allowed to do work at my discretion, using my judgment. My customer trusted my judgment and we didn’t even know each other.” 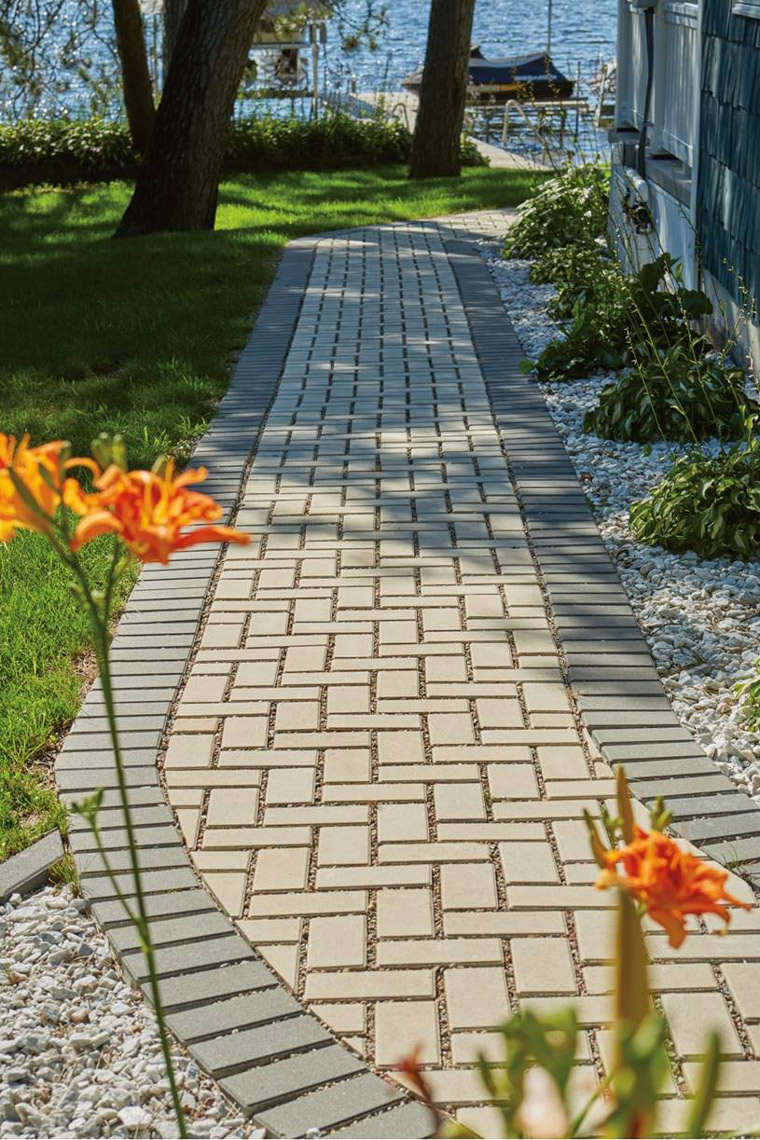 Later, he says as the relationship gained more traction, the client reiterated he was happy and to keep on doing what he’d been doing. And, Bohm says he’s particularly proud that when the wife was unhappy with the initial patio they were able to work things out.

“It wasn’t quite the way she wanted it to be,” he says. “We simply worked together to recreate the type of living space she wanted.”

Bohm’s also pleased by the awards the job has garnered, although he says the initial selection by WLCA truly caught him by surprise.

“My sales rep at County Materials wanted me to fill out the application for the award, and I said there’s just no place to carve out any time,” he says. ”She had one of the people at County Materials write it up for me, I edited it, they sent it in and I forgot about it. Then, the e-mail came, and the award was there, and I’m extremely proud of it.”

Next post Considerations For Entering The Tree Care Business