Story of a Landscape: University Adds a Paver “Living Room”

Sometimes project deadlines can create difficulties, but this company overcame the challenges to reach an award-winning job.

The Legacy Paver Group is a certified Interlocking Concrete Paving Institute installer. However, when the University of San Francisco hired the Santa Rosa, California-based firm for a project, they needed much more than the ability to get blocks in the ground.

Company owner Hayley Johnson says the job to put hardscape around the campus’s new science building required a good design eye, and a host of project management skills needed to get the work finished by an ever-shrinking deadline.

Fortunately, she adds, the school has some outstanding property managers who let her do her thing.

Johnson and Legacy Paver Group are no strangers to the school. She explains the relationship first began when university officials decided to spruce up the campus by replacing the asphalt that made up the walkways, access paths and plazas with pavers.

“They reached out to a couple companies in my field,” she says. “I sat down with them and we clicked on the design. Then, they hired somebody else to do the first phase, but it didn’t go well.” 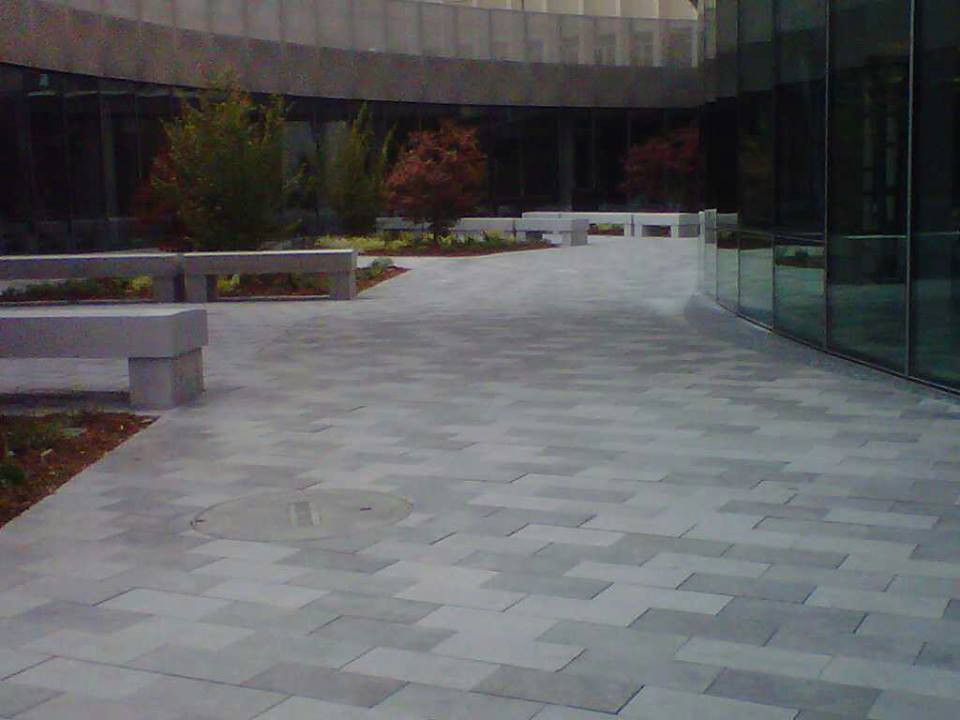 While Johnson acknowledges her bid on the first phase was about a quarter per square foot more than the company that won the bid, she believes they ran into difficulties meeting the project’s tight deadlines.

“They invited us back for phase two, and we knocked it out of the park,” she says. “We really worked to meet all the deadlines. Obviously, they have students walking around and moving in, they had to have access, so the deadline was really key.”

In order to complete the job on time, her team of installers sometimes worked overnight.

“They really appreciated our efforts and we’ve been back to do all the paver installations since then,” she says.

However, school officials had more than just walkways on their minds. With the construction of the John Lo Schiavo, S.J. Center for Science and Innovation, they were looking for a public atrium and plaza that would serve as a new living room for the campus.

Legacy Paver Group was happy to lend a hand.

“They wanted to do pavers again, but they wanted to mix it up with more than just traditional concrete pavers,” says Johnson. “We worked with them to source natural granite blocks from overseas, and then they hired us to install them.”

However, getting the job finished provided multiple challenges. The first, Johnson says, was working with the natural pavers from overseas.

“If we were short a color or a pallet broke, we couldn’t call them up and say that we need another pallet of this size or color,” she says. “It would have taken three months to get here.”

To deal with upsets of that nature, Johnson says she’d track inventory every day, using spray paint bottles to color code what was available.

“We had pallets, sometimes stacked three and four high, and it wasn’t easy to tell if we had four sets of this color or three of this size,” she says. “And, when we’d get low on say the pink-coded ones, then we’d have to halt and reassess.”

Her big concern: “We wanted to make it look cohesive, and not just like we ran out of the black ones.” 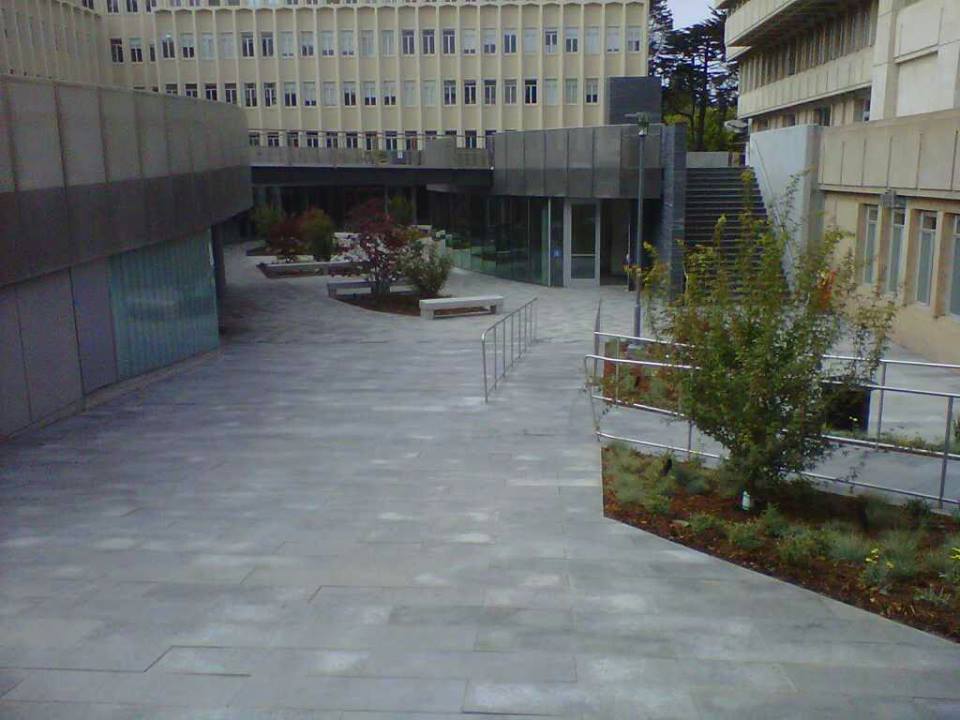 One particularly large problem was an order for 6,000 square feet of stone that was supposed to be 3 feet by 1 foot planks but was delivered as 6-inch by 12-inch pieces. (In the end, she says the area with the smaller pieces is one of her favorite parts of the job.)

Fortunately, Johnson says, the general contractor and facility management people were good about sitting down with her on-site where she’d do mockups of different patterns and reduced color combinations.

The big problem, however, was the deadline, which she describes as “always looming.” And, while the hardscape team was supposed to be one of the last ones on the site — with two months to complete its work — that wasn’t the case.

“The deadline didn’t change, but the start date changes all the time,” Johnson observes. “Our time available started to accordion. We went from thinking we had eight weeks to complete the project, to six weeks, to five weeks to complete it.”

At the same time, Legacy Paver Group was by no means the last sub on the site. She says her crews were constantly cleaning up mulch and topsoil from the landscapers while dealing with windows and carpets that hadn’t yet been installed and the electricians and networking people who were still laying conduit.

“There was a big area that we weren’t allowed to touch right away because a crane was still in there,” she says.

Ultimately, Johnson turned to the local labor union to supplement her regular crew, which offered its own challenges, including the need to negotiate her staff into the union.

“Then, every time I added one of my workers I had to add a labor worker to stay within my quota,” she says. “Fortunately, it worked out really, really great. We got some fantastic laborers from the labor pool and we were able to complete the project on deadline, even in the shorter space of time.”

At times, Johnson says she had as many as 20 people working on-site, which made tracking inventory even more critical. And, yes, there were some overnighters, but for someone who 20 years ago worked the same sort of hours for website startups, this is much better.

“As you get closer and closer, you feel this sense of achievement,” Johnson observes. “With those websites, I can’t look back on any of that now because it’s all gone. But, 20 years from now, I can still take my kids to any of these paver jobs that I end up doing and tell them stories about it.” 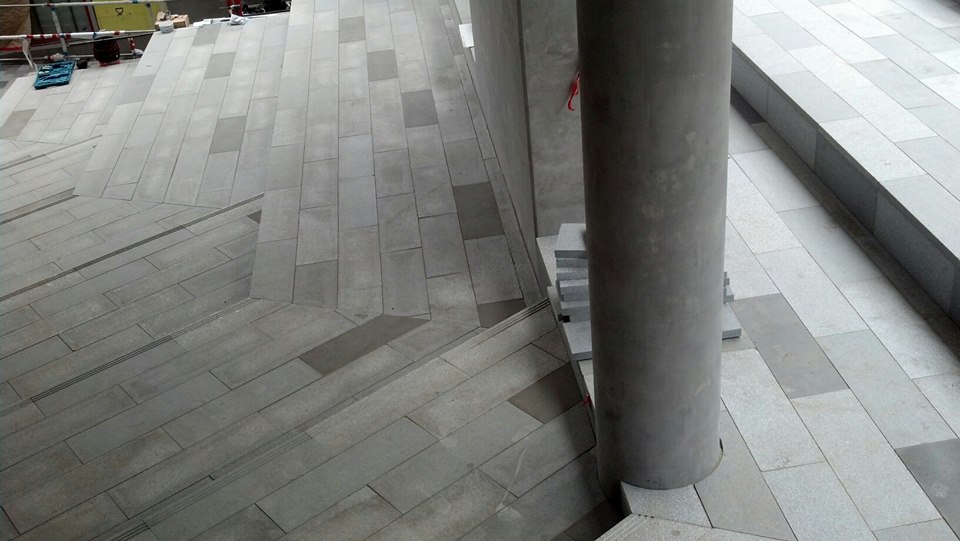 Besides meeting that deadline, Johnson says her greatest sense of pride is the aesthetics of the job.

“It’s just beautiful,” she says. “Everything fits perfectly, and parts of it are truly breathtaking, but I think when you’re there as a student you just get a sense of calm and design. It’s really, really nice.”

The project, for which Johnson estimates Legacy Paver Group was paid 20 percent of the building’s approximately $5 million budget, also won the company the “Combination of Hardscape Products – Commercial – More than 20,000 square feet” award this year from Hardscape North America (HNA).

As nice as the award is, Johnson says what she’s taken away from the project is how much she knew and how well she could anticipate and resolve problems as the job went along.

“What sticks in my mind with this project is we were literally able to use all our experiences,” she says. “Everything from inventory tracking to manpower management to scheduling to design — everything that we had ever come across — we were able to utilize.

“It shows me the importance of hiring somebody that has learned already,” Johnson concludes. “When something happened, we didn’t go running to the client or the contractor and say, ‘How are you going to fix it?’ We could say, ‘This is happening and this is how we suggest we fix it.’ Every single time.”