It’s been a very good fall for Olivia Lockett. The owner and president of C.R. Schmidt, Inc., not only helped celebrate her beloved Cubs’ first World Series championship since 1908, but the paver work her firm did outside Wrigley Field earned an award from Hardscape North America (HNA).

She explains that the Ricketts family, which owns the team, not only invested in upgrading the on-field product, but the historic stadium on the city’s North Side is in the midst of a multi-phase renovation, as well. One of the first areas to benefit from the work: the outfield bleachers.

“While a lot of the work occurred on the stadium side, they also renovated the exterior entry to the bleachers, and that’s where our paving took place,” says Lockett. “It’s a brand-new entrance for bleacher ticket holders, and we went down the sidewalks on either side of that entrance on Waveland and Sheffield, both very well-known streets to Cubs fans, and around the Harry Caray statue.” 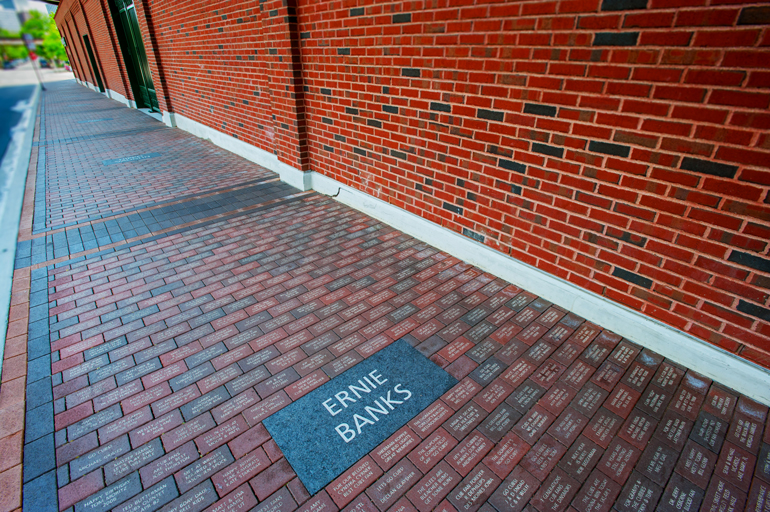 Although in the end Lockett says her Warrensville, Illinois-based company got the job based on a combination of merit and competitive bid, C.R. Schmidt was contacted about the job by Pepper Construction Group LLC, the general contractor, as one of its prequalified subs. Additionally, she says the Ricketts family is interested in supporting minority and women-owned firms.

“Being a female-owned subcontractor company, that was attractive, too,” she says.

The job, however, was anything but a walk in the (ball)park. The work was scheduled for the baseball off-season, so part of the project was done in November and December of last year, with the rest completed before opening day this spring. 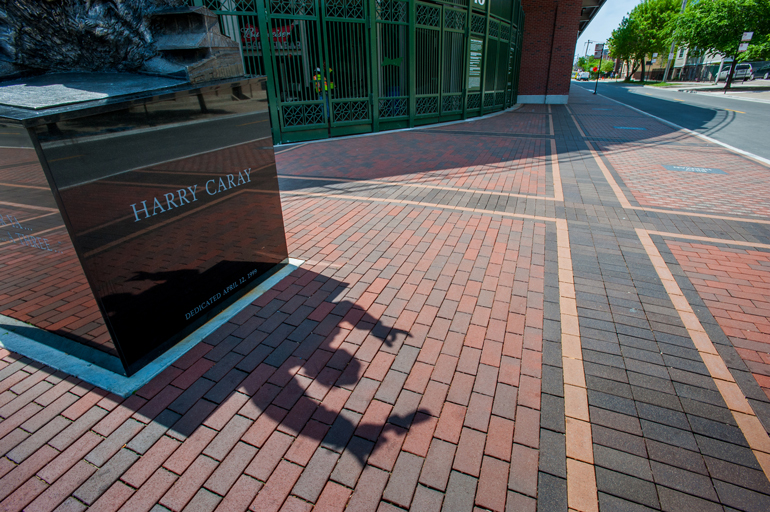 “Last fall got very cold, very quickly,” Lockett says. “We did run into some challenges with getting the pavers installed in the extreme cold weather. They were sticking together and we were using blow torches to thaw them out.”

Fortunately, the company could complete the first section of its work before shutting down before the end of the year, and the spring weather cooperated.

Still, Lockett says, “We were wrapping up, literally, just a couple days before opening day.”

The biggest challenge, however, was the layout of the project. Almost half of the pavers used on the project are engraved. Wrigley Field has had a program where fans could buy engraved pavers, and as part of the renovation it was decided the old pavers would be totally scrapped, new pavers would be engraved and then installed in their previous locations. 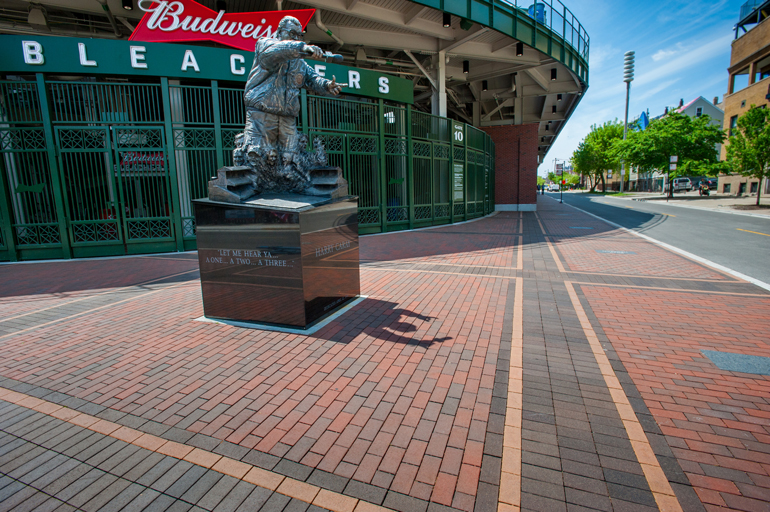 “That decision was made before the paver installer got involved,” says Lockett. “All the new engraved pavers were turned over to us to be put in very specific places, and that was a real challenge. Our installers had to be very diligent in placing the named engraved pavers in exactly the locations we were required to place them.”

She describes the overall layout as, “very cool, but very specific.” The mix features a combination of three separate paver colors: a brick-red field, with black-and-tan banding that goes around and through the various-sized squares of red pavers.

Another challenge, she says, was simply the age of Wrigley Field.

“We were dealing with a building that’s more than 100 years old, and wasn’t necessarily straight,” Lockett says. “There were some challenges with that and making the layout happen.” 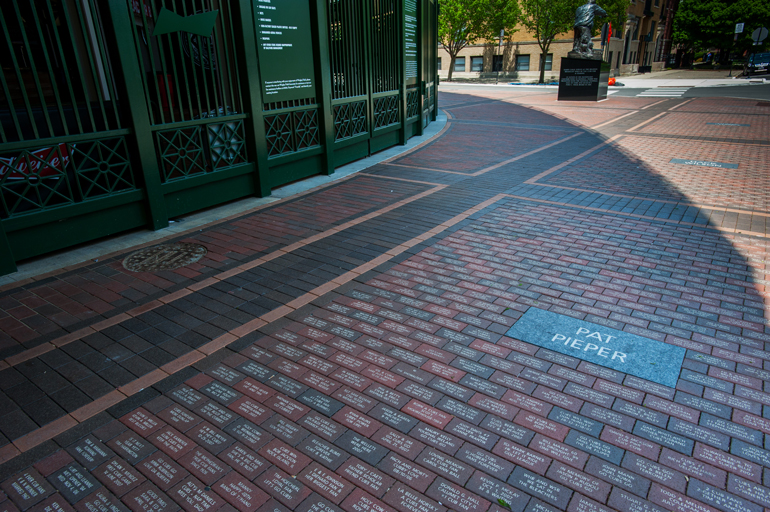 And, while the paver decisions were made long before the C.R. Schmidt team — which ranged from four to ten men — got on the site, Lockett says working with The Belden Brick Company, which supplied the job, went smoothly.

“We didn’t have the most contact with them, but we did have to coordinate shipping and delivery, both to us and to the engraver,” she says. “They were great. They make an awesome clay paver, so there were no quality issues, and the colors look fabulous. It all went very nicely.”

“It might look a little odd, but the reason for that is the engraved pavers, which were close to 6,000 square feet, were not in our contract,” she explains. “The dollar amount is not reflective of material purchase.”

Naturally, Lockett is proud of being recognized by HNA for the project, which was cited as Clay Brick – Commercial job of the year. However, her pride in the job goes well beyond that. 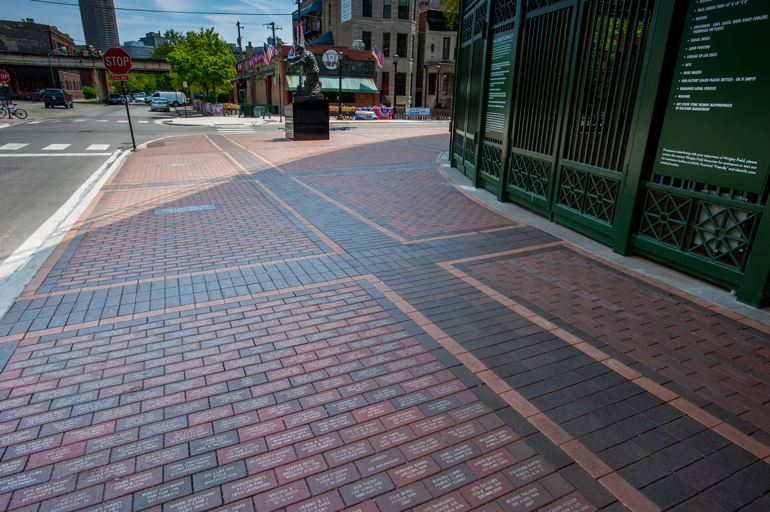 “Being life-long Cubs fans, I and a lot of our staff were just proud to be involved,” she says. “Of course, with the World Series, the timing couldn’t have been better. We’re certainly happy to be the first paver contractor to work on the Wrigley renovation.”

She also hopes the relationship will continue, although she admits the next phase doesn’t involve a lot of surfacing work in it.

Beyond the satisfaction of knowing her company’s work will be appreciated by Cubs fans well into the future, Lockett says she came away from the job with a deeper appreciation of generations of Cubs fans.

“The fans are really the biggest part of this,” she concludes. “Seeing all those names on those pavers and making sure their investment and their memories in the Cubs were preserved by us installing them connected us to the fans in a more intimate way than just creating a surface. We all felt very connected in that way; it was not an everyday experience we got to have with this job.” 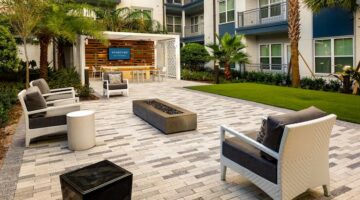