OSHA Increases Penalty Amounts For 2018
In accordance with the Federal Civil Penalties Inflation Adjustment Act Improvements Act of 2015, the Department of Labor increased penalty amounts for violations of workplace safety and health safety standards by two percent beginning January 2, 2018. New penalties for willful and repeat violations are $129,336 per violation; serious, other-than-serious, and posting requirements are $12,934 per violation; and failure to correct violations is $12,934 for each day the condition continues.

New England GROWS Dissolves after 25 Years
After 25 years, the award-winning horticultural tradeshow New England GROWS is discontinuing operation. The GROWS board of directors, representing the four founding partner organizations, made the unanimous decision to dissolve and disband both the GROWS event and the organization. Founded by New England Nursery Association, Massachusetts Arborists Association, Massachusetts Nursery & Landscape Association, and Massachusetts Association of Landscape Professionals in 1993, New England GROWS’ mission was to educate, elevate and support the region’s commercial horticulture industry. Over the course of more than two decades, the not-for-profit organization contributed millions of dollars in educational grants to the industry through its partners, as well as to horticultural and community groups like Cooperative Extension, the Horticultural Research Institute, FFA organization, local vocational schools, and the Boston Schoolyard Initiative.

ALCC Partners With NALP’s Industry Growth Initiative
The National Association of Landscape Professionals has announced that Associated Landscape Contractors of Colorado (ALCC) is the first state association to partner with NALP in support of the Industry Growth Initiative, NALP’s program responsible for growing the industry and its workforce. Together, the organizations will help lead these growth objectives essential for the industry’s future. As a demonstration of their commitment, ALCC has committed $15,000 in seed money toward the initiative, with a goal of raising $75,000 in support from its membership.

NCLC Heads To North Carolina Next Month
The National Association of Landscape Professionals annual collegiate career event and competition, the National Collegiate Landscape Competition will take place March 14-17, at Alamance Community College in North Carolina. This year, more than 750 horticulture and landscape students from more than 60 schools will test their skills in 30 real-world, competitive events, and they will interview with landscape, lawn care, tree care, irrigation, and other companies at the Career Fair, which will be held on Thursday, March 15.

OPEI Sets New Headquarters Grand Opening for May 7
The board of directors for the Outdoor Power Equipment Institute recently met in Miami, where they elected two new members – Mark Wagner, President, Club Car LLC, and Joseph C. Wright, President and CEO, Excel Industries. It was also announced at the meeting that the final plans for OPEI’s new headquarters building at 1605 King Street in Alexandria, Virginia. were finalized with the grand opening and ribbon cutting set for Monday, May 7 from 12 noon to 2 p.m. The event is open to OPEI members, trade press, and guests who will tour the new facilities. Both OPEI’s Handheld Products and Engines and Fuels committees will be meeting that week in the new conference center. The next board meeting will be in conjunction with the OPEI annual meeting held June 16-18, 2018, in Bonita Springs, Florida.

Conserva Irrigation Continues Rapid Growth in 2018
Conserva Irrigation, headquartered in Richmond, Virginia, says it has signed six new franchise agreements so far in 2018 – Fort Worth, Texas; St. Louis, Missouri; Long Island, New York; Palm Beach, Florida.; Fort Lauderdale, Florida and Richmond, Virginia. The company has signed a total of 35 new franchise agreements since beginning franchising in June of 2017, and expanded into new markets including Houston, Texas; Lexington, Kentucky; Richmond, Virginia; and Scottsdale, Arizona. Company Founder Russ Jundt says the company continues to seek single- and multi-unit operators with a range of experience levels, as well as those looking for add-on or conversion business opportunities. Potential franchisee candidates should be willing to invest between $43,550 and $80,250.

Advion Fire Ant Bait Approved for More Uses
The U.S. Environmental Protection Agency (EPA) has granted a supplemental label for Advion fire ant bait to be used in turf on sod farms and pastures grazed by horses and other companion animals. Advion fire ant bait controls foraging worker ants within 12 to 48 hours, and delivers total colony control within 72 hours. Advion does not need to be watered in and does not require contact activity. Ants will actively seek out the bait and bring it back for the entire colony to eat, including the queen, according to Syngenta. Syngenta says applicators must have the approved Advion fire ant bait supplemental label with them at time of application when using it for sod farms and pastures grazed by horses.

Terex Utilities Team Members Assist At-Risk Youth in Texas
Terex Utilities team members from across the nation traveled to Houston, Texas for the company’s annual sales and service training meeting in January. While in Texas, 85 employees teamed up with the company’s San Antonio-based service center to get involved in two local community organizations that serve at-risk youth. For one of the projects, 16 bikes were purchased and assembled for Therapeutic Family Life (TFL), a foster-care agency. The other project involved packing 100 personal hygiene kits for Boysville Inc., a home for boys and girls who cannot remain in their own home due to abuse, neglect, abandonment or family disruption.

Davey Tree Expands Operations in Denver
The Davey Tree Expert Co., headquartered in Kent, Ohio, has expanded its residential and commercial operations in Denver, Colorado. A Denver resident since 2001, Vince Distrola has been named the district manager of Davey’s new South Denver office. He began his Davey career in 2002. An International Society of Arboriculture certified arborist and Tree Care Industry Association Certified treecare safety professional, Distrola graduated from the Davey Institute of Tree Sciences, the company’s flagship training program, in 2004. Most recently, he was assistant district manager of Davey’s West Denver office. 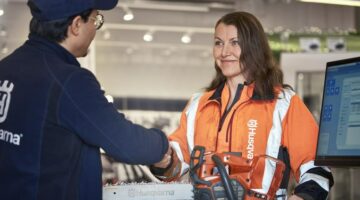