Landscape Ontario’s Congress Set for Jan. 9-11, 2018
The 45th edition of Congress, Canada’s premier trade show and conference, owned and produced by Landscape Ontario Horticultural Trades Association, is set for January 9-11, 2018. It features more than 600 multinational vendors in over 1,300 exhibits spread over eight acres at the Toronto, Congress Centre, Toronto, Ont. Congress is co-located with Fencecraft, a show-within-a-show, owned by the Canadian Fence Industry Association.

CASE Dealer Equips Team Rubicon with Excavators
CASE Construction Equipment dealer Titan Machinery donated the use of two excavators to Team Rubicon for a service project and training event at the DeSoto National Wildlife Refuge in Iowa and Nebraska. The excavators — a CX210D and CX250D — were used to remove several levees and water culverts as part of a wetland habitat development project. Team Rubicon is a veteran-led disaster response organization that deploys teams globally. Its heavy equipment operators have been trained as part of a partnership with CASE that began in November 2015.

Kubota Tractor Joins National Hispanic Landscape Alliance
Kubota Tractor Corporation has joined with the National Hispanic Landscape Alliance, an organization dedicated to facilitating the upward mobility of Hispanic Americans as professionals and entrepreneurs in the landscape industry. Since its inception in 2011, the NHLA’s mission has been to empower and equip its members with the necessary tools and resources to grow and become more successful professionals in the industry.

Deere Buying German Road Construction Company for $5.2 billion
Reuters reports that U.S. based farm and construction major Deere & Co said on Thursday, June 1, it would buy privately held German road construction company Wirtgen Group for $5.2 billion, including debt. Wirtgen makes equipment used in laying roads and has a network of company-owned and independent dealers in about 100 countries. Deere said the acquisition it will not see any product overlap and that it expects the deal to close in the first quarter of 2018. Citigroup was Deere’s financial adviser.

Economist/Author Alan Beaulieu to Deliver GIE+EXPO Keynote
Alan Beaulieu will deliver a keynote address at the GIE+EXPO, held Oct. 18-20, 2017 at the Kentucky Exposition Center. The Dealer “Kick-Off” keynote is free with tradeshow registration. He is co-author of Prosperity in the Age of Decline, a powerful look at how to make the most of U.S. and global economic trends over the next 20 years. He also co-authored Make Your Move, a practical and insightful guide on increasing profits through business cycle changes. Beaulieu’s session, titled A Good Year Ahead, will focus on the uncertainty and volatility that business leaders confront today.

Ariens New Website Highlights Product Portfolio, Company History
Ariens has launched a brand new website, highlighting the portfolio of outdoor power equipment products and the company’s family history. New features include a product selector tool for both lawn and snow products where customers are able to choose from several criteria to match the best product to their property and landscaping needs. The site also includes expanded product information and spec comparisons for customers to compare products side-by-side.

Project EverGreen Finishes Two More Projects for Healthy Turf. Healthy Kids.
Project EverGreen formally dedicated two of its most recent Healthy Turf. Healthy Kids. projects when it cut the ribbon on the Hazlet (NJ) Youth Athletic League’s William B. Paterson Field and the Neighbors of Vega Baja community garden in East Harlem, New York City. The Hazlet project started in October 2016 with a professional landscaping renovation to restore and improve the health of the weather-damaged grass field which serves as the home playing surface for nearly 1,500 children football leagues within the Hazlet Township community. The dedication of the renovated Neighbors of Vega Baja community garden took place on Saturday, May 20. The project was supported by a Con Edison community service grant, NYC Parks GreenThumb and local landscape and nursery industry professionals.

Wright Mower Wins New Product Award
Wright Manufacturing has won a Twenty for 2017 new product award for its Sport Intensity commercial lawn mower. The 36-inch Sport I was introduced last fall at GIE+EXPO. The Sport I is a new twist on the popular Stander stand-on mower that Wright invented in 1997.

Agenda, Speakers Announced for Greater & Greener 2017 International Forum
The International Forum agenda has been announced for the Greater and Greener 2017 in Minneapolis and St. Paul on Wednesday, August 2. It will be from 7:30 a.m.—4:30 p.m. City Parks Alliance and World Urban Parks present a series of interactive presentations and discussions about approaches that cities around the world are taking to create healthy, sustainable, and resilient park systems. 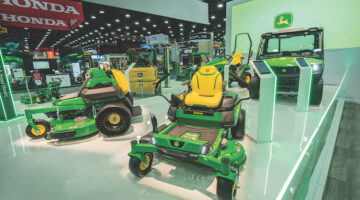