SiteOne Landcape Supply, based in Roswell, Georgia, is full-steam ahead in branding itself as a standalone company, a process it intends to complete by year’s end. Visual evidence of the company’s former presence as John Deere Landscapes is being replaced with the new name, logo and tagline but the company will retain the heritage of the former company, said CEO Doug Black at the recent GIE+EXPO in Louisville.

“The point to make is that we are not a new company. In fact, we area very old company,” said Black who referenced the history of John Deere Landscapes and its growth over the years. John Deere Landscapes began with the purchase of McGinnes Farms and Century Rain Aid in 2001, and the firm grew as it acquired LESCO in 2007 and Shemin Landscape Supply in February 2015. 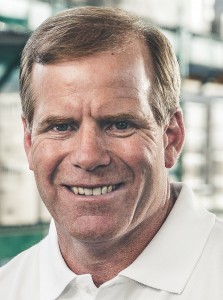 “Our challenge and our vision is to take that selection of companies and continue to grow it and take it to a new level with increased focus on the distribution of landscape supplies to our customers,” continued Black, who joined SiteOne in April 2014.

SiteOne has been majority owned by Clayton Dubilier & Rice, a private equity firm based in New York City since October 2013. CD&R reportedly paid approximately $465 million in the deal. CD&R is no stranger to the green industry, having acquired ServiceMaster in 2007, then the parent company of TruGreen. ServiceMaster divested itself of TruGreen at the end of 2013.

SiteOne is the largest distributor of landscape and grounds equipment and supplies in North America, with sales exceeding $1.2 billion annually. SiteOne is larger in terms of revenue than its next 14 competitors combined. The company boasts 460 stores located in 44 states and five Canadian provinces.

Approximately half of the company’s 2600 associates were formerly landscape contractors, grounds managers or golf course superintendents, said Black. “We have some of the best associates in the industry,” claimed Black. “We have associates that are not only local, but they know their customers.”

Black acknowledged the company is exploring an IPO. In late August SiteOne filed for a $100 million initial public stock offering.