Efficiency is already a struggle for most companies, but it can be an especially daunting thing to achieve as a small business. A small business means fewer employees, which means less time to be constantly reorganizing and reprioritizing your inventory and tasks.

Efficiency is also one of the key tenants of running a successful irrigation program. But irrigation, more than other areas, can be especially difficult to manage smoothly and in an organized fashion. Imagine a small team of six employees handling all of the inventory and tasks associated with irrigation. That’s exactly what Dean Wahrenbrock, irrigation manager of Graham Landscape and Design, and his team do on a daily basis. And thankfully, they succeed at it.

Wahrenbrock recently discussed his methods that help the growing Graham Landscape and Design efficiently and professionally manage irrigation projects, even with just a few key employees in the department. 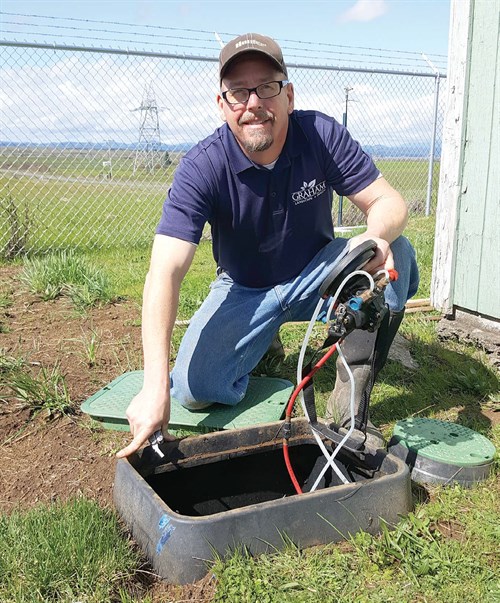 Dean Wahrenbrock, irrigation manager for Graham Landscape and Design, performs a backflow test at a jobsite.

Wahrenbrock has worked for Graham for four years. In that time, he has seen the company grow from just a handful of employees to about 20 people on both the construction team and the maintenance team, with six on the irrigation side.

By setting time aside at the beginning of the season to organize, and by devising an organization structure that works best for their inventory and team, Wahrenbrock has increased the efficiency of Graham’s irrigation work. He realized that on a daily basis a small team has many things to worry about, so having to constantly look for equipment should not be one of them.

“We typically stock everything from installs to repairs,” Wahrenbrock says. “We organize it from the smallest fittings to the largest on top.”

While the business is still relatively small, it has been able to grow and gain more projects because of the development of efficient operations, specially, its irrigation offerings.

If you are a small business, however, you are probably constantly thinking of where you can save money and cut corners, but you may not focus on the efficiency aspect as much. But not having the right tools for the various irrigation tasks that may arise will end up costing you more time and money in the long run than being fully prepared from the get-go.

Base inventory on growth

As people begin annually organizing and stocking their irrigation inventory, they often tend to simply order as much as they did the year prior. Especially as a new or smaller business, this may seem like the easiest, most efficient route to take.

However, if your business is growing as it should, this is a recipe for running out of materials, and quickly. While Wahrenbrock admits that even Graham is not immune to running out of inventory from time to time, even with a solid plan, he has come up with a system that helps him avoid that hurdle most of the time.

“Typically our growth has been about 25 percent a year,” Wahrenbrock says. “We take with our distribution what we ordered the year previous and add 25 percent of that.”

Not only has projecting how much inventory he will need based on past performance helped save Wahrenbrock time by not having to make rush orders at the last minute, which also keeps his customers at ease, his agreement with his distributor has improved the team’s efficiency and saved the company money.

More specifically, Wahrenbrock has an agreement that every year Graham will order their irrigation inventory with this distributor, instead of placing orders on a year-by-year basis. This ensures the company gets their inventory, and it gets them “better discounts,” he says.

Since he has managed a small team while also working to find the best employees possible, at one point Wahrenbrock found himself taking on nearly every facet of his irrigation projects. While doing this, he quickly learned that relying on one person can severely slow down the irrigation department’s efficiency, even if it seems like the right move at the time.

As Wahrenbrock has built up his team, he has figured out where to put his energy as well as where to let others take the reins.

“I do all the bidding, and then my two most-senior technicians help with the flagging out after my initial consultation with the customer,” Wahrenbrock says. “I let them do their thing, and I manage more so from a distance. I do go on-site, but I let them manage their project. They are the project managers.”

Know your property before the job starts

Just as with ordering the exact amount of inventory you need, avoiding all possible roadblocks while out at the site is simply not possible. As a business, especially as a small one, however, there are steps you can take to make sure your time at the jobsite is as efficient as possible to aid both your client and yourself. You only have a few employees, so you want to make sure their time is used wisely.

Before even having them step foot on the property, Wahrenbrock walks through every possible difficulty in installing irrigation with his crew.

“We have pre-construction meetings prior to every project,” Wahrenbrock says. “We walk through all of the ins-and-outs around potential projects, whether that’s roots or utilities, prior to when the project starts.”

Efficiency and irrigation can go hand-in-hand, even if you are trying to achieve it with a small team. As Wahrenbrock has found, the more effort you put into setting up organized inventory and operations at the beginning, the easier it is to manage over time.

But beyond just the general investment and set processes that go into developing an efficient irrigation procedure at a small business, Wahrenbrock says you also need to have trust in your people and passion for your industry.

As Wahrenbrock says, “We work for more than just a paycheck.”