Irrigation planning that takes water conservation into account is now the norm.

As we speak, auto manufacturers are spending tens of millions of dollars to design and construct vehicles that maximize every drop of fuel. They’re doing this for a combination of environmental, financial and regulatory reasons. And those same motivations are playing out in the landscape irrigation industry, where new technologies, combined with a thoughtful approach — and, in some cases, regulations — are resulting in irrigation installations that use less water and make the most of the water that is used. 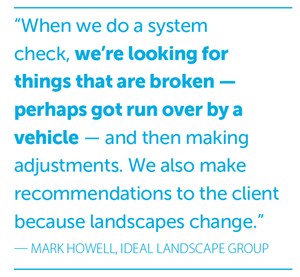 James Martin, owner of Gulfside Landscaping in Pensacola, Florida, says that in order to truly conserve water, “The person designing the landscape must also design the irrigation system.” Unfortunately, in many cases, that doesn’t happen, he points out.

For example, on commercial projects a civil engineer might design the irrigation system for a site, but not take into account factors like the specific soil conditions present. “They’re sitting in an office two states away … and it’s not that their plan isn’t wonderful, it just isn’t consistent with the soil composition or the water,” Martin says.

Or it could be that a specialized irrigation contractor might be brought in to do the install. “The irrigation contractors that I have encountered generally do not want anything to do with landscape plant materials or turfgrass science or anything like that,” Martin says. “So you plant these trees and this plant material and everything ends up dying because it’s getting either too much water or not enough.”

Having the same contractor — who is knowledgeable not only in irrigation but also in the water needs of different turf, trees and plant materials — is the only way to ensure that the right amount of water (no more and no less) is applied only to the right places, he reiterates. Along the same lines, Martin says in cases where a new landscape is being installed, the existing irrigation system must be retrofitted to accommodate it.

Helping in the quest to conserve irrigation water is an array of new technologies. Mark Howell, irrigation manager with Ideal Landscape Group, a full-service landscape contractor in St. Louis, is often called in to improve the efficiency of an existing irrigation system. This often involves changing over to pressure-regulated sprinklers and other equipment swap-outs. 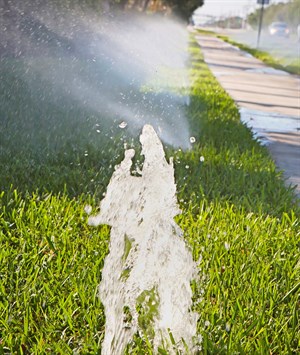 “Toro has come out with a line of Precision series nozzles that almost reduce the water use by half,” cites Howell of one example. “That’s been one of the biggest innovations to come along in irrigation as far as water efficiency in a long time.”

One recent new irrigation system install that Ideal Landscape Group was involved with was particularly water efficient, Howell says. For starters, a flow meter was installed along with a master valve; as each zone is run, the smart system “learns” how much water each zone should require. The system can also be programmed with how much water is available. If these limits are exceeded, the system shuts down and tries to determine if there’s a main line leak or a valve stuck on somewhere, etc. “The controller also sends you an alert on your phone,” Howell says. Catching a major leak right away has the potential to save tremendous amounts of water, he notes.

“Also, pressure-regulator heads were used throughout, and the central control system utilizes moisture sensors that we buried at four different locations on the site. So based on the ground temperature and the moisture level at each one of those locations, the controller can be manipulated to water accordingly,” Howell explains.

When weather stations first came out, they were satellite-based and were simply working from general weather conditions in an area, unable to take into account the microclimates that exist even on individual properties. Newer-generation weather stations that can be installed on-site have improved accuracy levels. And now soil moisture sensors can monitor what’s actually happening 2 to 3 inches into the soil, where the roots are growing. If the plant doesn’t need water, none is applied.

Howell says that these types of technologies (including smart controllers on the residential side) are inspired by the technologies once used only on golf courses and are helping not only to reduce water use but also ensuring that water is applied when and where it’s needed.

But it takes more than technology to ensure that water is not wasted. Even on commercial construction projects, like those that Ideal Landscape Group works on where the installer is often at the mercy of a project designer, Howell says there are things that can be done on-site to reduce water use and improve efficiency.

Beyond going through the system and checking its operation and performance in the spring, Ideal Landscape Group also conducts system checks during the season (from two to eight times a year, depending on client preferences).

“When we do a system check, we’re looking for things that are broken — perhaps got run over by a vehicle — and then making adjustments. We also make recommendations to the client because landscapes change,” Howell explains. “A lot of times, when the irrigation system went in the whole landscape went in new. Well, six or eight years later, the plants are all mature and things are getting blocked, or they’re not getting covered … a 3-foot-wide bed now has a plant that’s 8 feet wide with sprinklers in the middle of it.”

In these cases, moving a head or trimming a bush can help ensure that water is applied where it’s needed without being wasted. This sort of water conservation requires human eyes on the site; it can’t be done from a design office.

For companies that maintain the whole grounds in addition to irrigation work, Howell says that it helps to have mowing and gardening crews who are there at least weekly keep an eye out for instances where water may be wasted. “Our mowing crews report to us situations where it’s too wet, and they think something might be wrong,” he notes.

Martin at Gulfside Landscaping is also a big believer in performing irrigation system checks. “You have people going over the property with mowers, you have people walking through the landscape beds pulling weeds and trimming shrubs,” he states. In the process, the irrigation components can be damaged. His company offers a package service that involves monthly checks of the irrigation system to be sure that heads haven’t been damaged, that the rain gauge is working, that heads are rotating properly and have not been knocked into the ground at an angle, that nozzles are not clogged, and so on. “While this is not the most significant way to conserve water, it certainly is a component,” Martin says.

Sometimes changes need to be made to the actual design of the system to make it more water efficient. Martin sees irrigation installers make some common mistakes, particularly on residential properties: “They’ll put a rotor in and they’ll try to cover the grass and the plants at the same time. But that’s two completely different perception-rate requirements,” he explains.

Other mistakes may include not taking shifting shade and sun patterns into consideration. Or systems are built with too few zones to handle elaborate and diverse landscape plantings. Many times, the result of all these problems is general over-watering in a misguided effort to be sure that all plantings are getting enough – not only wasting water but also harming the health of some plants and introducing fungus problems.

Conversely, if the irrigation system is properly designed to take in factors such as the water needs of different plants, the amount of sun, the soil, etc., then water can be minimized to only the amount needed to keep each part of the landscape growing healthfully.

Next post Story Of A Landscape: A Japanese Import Earns Turf Replacement Honors