Home » Keeping It Green » Don’t Get Blown Away

Don’t Get Blown Away

The best way to avoid blower bans is to not give clients reasons to gripe in the first place.

It’s spring and backpack blower season is here. It’s a long season, and it will continue until autumn’s last leaves settle to the ground on our clients’ lawns.

While many of us are starting to use battery-powered blowers, gasoline-fueled units remain the products of choice in the professional market because of their power and durability. In fact, the professional services industry finds the use of backpack blowers almost indispensable, given the labor savings their use offer compared to sweeping or raking properties. But, some property owners don’t like the “noise” that blowers produce, and their complaints sometimes cause U.S. communities to severely restrict or in some cases, ban the use of grass and leaf blowers.

Most recently Newton, Massachusetts, a city of about 85,000 people located seven miles west of Boston, began mulling restrictions on blower use. Specifically, the Newton Board of Aldermen is considering restricting the use of blowers to only April 1 to May 1 and Oct. 1 to Dec. 1 — and only on properties fewer than five acres.

Other communities across the U.S. (communities in California seem to have a special grudge against blowers) have instituted similarly “creative” laws aimed at these time saving machines. In many cases these laws end up being mostly a financial burden for these communities. (Does any community really need blower police?)

Thankfully, the incidence of community blower bans, although still popping up occasionally, has slowed in recent years thanks to several factors.

Most of us would like to think that all professionals are using their backpack blowers intelligently (see “10 Smart Blower Tips”). The great majority of time this is probably true. Think about it: any company annoying customers with blower noise won’t have those clients very long. Unfortunately, there’s not much that lawn service companies can do to control homeowner use of blowers, which is often the source of friction within neighborhoods and, sometimes, the spark that that starts a blower controversy.

The other major factor that has slowed the spread of blower bans—and one that property owners probably don’t realize—is that the gas-powered blowers that lawn professionals use these days are significantly quieter than the blowers they used as few as 10 years ago, as much as 75 percent quieter depending on the model. Manufacturers, such as STIHL, Husqvarna and ECHO, have made remarkable progress in dampening the noise levels of their blowers and, in some cases, changing the very sound of the noise to one that property owners find less annoying.

Husqvarna offers it 356BT model that features low-noise technology, including dampening material within the unit’s housing and an innovative exhaust tube.

ECHO Inc. took the lead on this issue thanks to groundbreaking work initiated by Larry Will, who joined the company in 1994 to head up its engineering department. Alarmed at the number of communities raising hell over blower noise and convinced they, through product design, could do something about that, Will and ECHO engineers, technicians and computer designers carefully studied how and where the noise from blowers originated.

Taking the company’s largest blower at the time, it didn’t take them long to determine that the impeller blades within the main blower housing was responsible for producing the unit’s high-pitched whine. They also examined noise from the exhaust muffler, the air intake and the internal explosion of fuel itself.

That initial work led the company to develop a new exhaust muffler, an air cleaner with a sound attenuator and an engine housing that had sound attenuating materials (foam) bonded to the inside of the housing to absorb combustion noises.

Will, writing about this work in his “History of the first quiet ECHO leaf blower”, said the company was able to achieve a 75 percent reduction in overall sound—and at no additional cost to the consumer and with no loss in performance. Consequently, every new blower produced by ECHO was significantly quieter than the one it replaced, most achieving at least a 50 percent reduction in sound,” Will shared in his history.

And yes, the nature of the noise emitted by blowers does matter. Some sounds grate on human ears more than others, even though the sounds, when measured, register the same level of decibel. Will of ECHO determined that the level of the noise (as irritating as it was when the first noisy blowers hit the market in the 1970s and 1980s) was one issue, and the quality of the noise they produced was another. Many property owners found the high-pitched scream of the older blowers almost too much to bear. Manufacturers have worked diligently to reduce the “annoyance factor” related to the sounds of blowers, which, in most cases, register lower decibels than the neighbor’s Harley Davidson.

But, as mentioned previously, some communities are still taking action to limit the use of backpack blowers. What, as professionals, can we do?

We can use the example of what is happening in Newton, Massachusetts. We can turn out as a group to public meetings when lawmakers are discussing bans and let them know that we are using these machines intelligently, and that the use of blowers is vital to the health of our businesses and, finally, that their use also saves property owners—the very people that pay city taxes—money.

READ: Do Your Part to Clean the Air 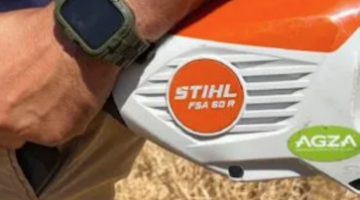