Jacrist Gardening Services installed an updated courtyard, a rooftop terrace on the fourth-floor and landscaping for indoor areas including floor lobbies at a downtown Buffalo, New York office space.

There are tough projects, and then there are ones that require a bit of imagination. Picture taking a 4,000-square-foot courtyard filled with trash and making it a garden spot for what’s now prime office and residential space but once was surrounded by the country’s largest paper box factory.

It’s little wonder Jacrist Gardening Services of Williamsville, New York, won not one, but two awards from the New York State Nursery and Landscape Association for its efforts at Five Hundred Seneca Street.

One is for the courtyard and creation of a rooftop garden on the property, for which the company was recognized in the commercial area for projects of $50,000-$100,000. The other involves landscaping several floor lobbies and the property’s other centerpiece: a three-story-high greenhouse atrium.

Richard Tedeschi, owner of Jacrist, says his contract initially started with the courtyard.

“I met Sam Savarino (owner of Savarino Companies LLC and one of the developers of the project) at a meeting and we spoke about what he had in mind,” Tedeschi says. “I explained the ideas I had for the property and he liked them so he gave us the go-ahead to do it.”

He adds, “It certainly was an opportunity for creativity to jump in.” 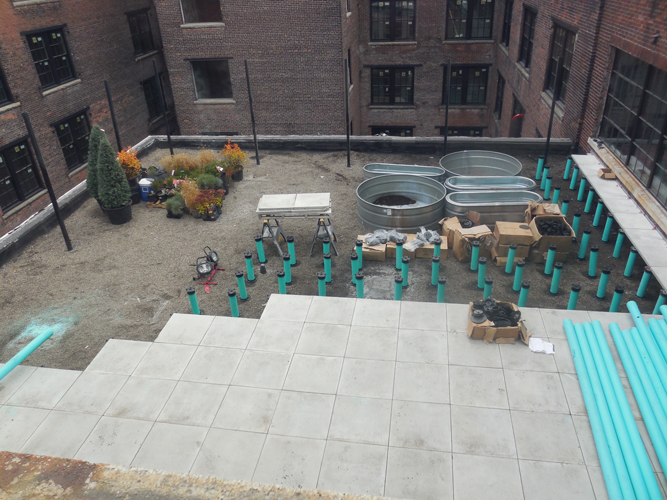 Along the perimeter of the terrace, Jacrist installed 10 stock tanks as planters. PHOTO: Jacrist Gardening Services

The first thing, of course, was cleaning up the courtyard. It was then that Tedeschi had to face a major challenge with the project.

“The inner courtyard was all concrete, and in accord with the DEC (New York State Department of Environmental Conservation) we could not break up the concrete because that would possibly expose contaminated soils,” he explains. “That meant anything we did had to be above-grade.”

Fortunately, the area is served by two commercial sewer lines, and Jacrist was able to have drain tiles installed to drain the site into those lines. Tedeschi subcontracted that work to VisoneCo Site Development.

Once that was completed, Jacrist brought in approximately 80 yards of garden soil and went about creating large raised berms throughout the perimeter of the courtyard. An automatic drip irrigation system was installed throughout the courtyard by Aqua-Systems of WNY. JD Santoro Inc. installed the undulating exposed aggregate walkways and seating areas.

Tedeschi says he felt it was important to use repurposed materials in conjunction with the old building, to honor its industrial past.

“We wanted it to look like it had been there for awhile,” he says.

One unique feature of the courtyard is the foundation of a large industrial chimney. Initially he had planned to plant the top of the chimney. However, upon inspection, the developers decided it wasn’t strong enough for that and it was removed.

“We were left with a large foundation, and that’s where I developed the idea of a natural planting so that it would look as if the foundation area had been reclaimed by nature,” Tedeschi says. 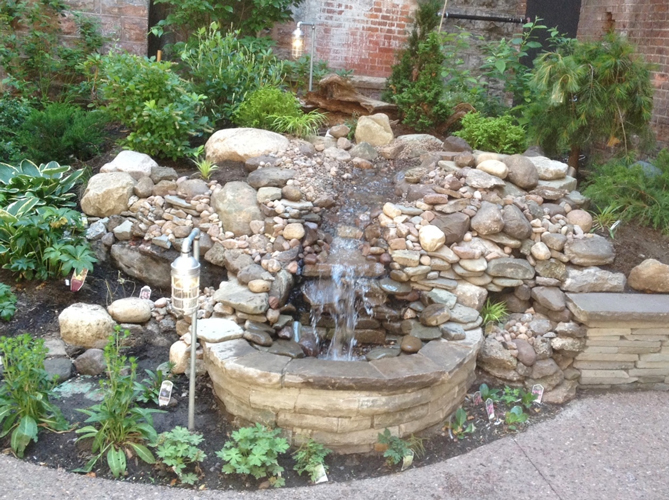 The recirculating stream and waterfall feature is built over the limestone foundation that flows into a reservoir. PHOTO: Jacrist Gardening Services

To further enhance the natural look, Jacrist installed a recirculating stream and waterfall feature built over the limestone foundation, which meanders through the raised bed to cascade down over the 3-foot edge of the foundation into a pondless reservoir.

The reservoir tank wall is constructed of repurposed Ohio sandstone so it looks appropriately old. An automatic tank-filling water valve ensures water supply is maintained in the feature and the pump is connected to a timer for energy efficiency. Repurposed flagstone and antique sandstone became an adjacent retaining wall to provide additional seating.

“There are actually three entrances into the courtyard, and with two of them you don’t see the waterfall right away,” he says. “However, you have the soft echoing of the sound of a waterfall, which beckons you to discover what the noise is. It was fun to situate it where I did.”

Along with the flagstone/sandstone seating wall, the courtyard has two bench areas, and in front of the waterfall is a patio area with tables and chairs. A pipe wind chime is installed near the end of the tunnel entrance to softly catch the breeze to create an inviting background sound throughout the courtyard. 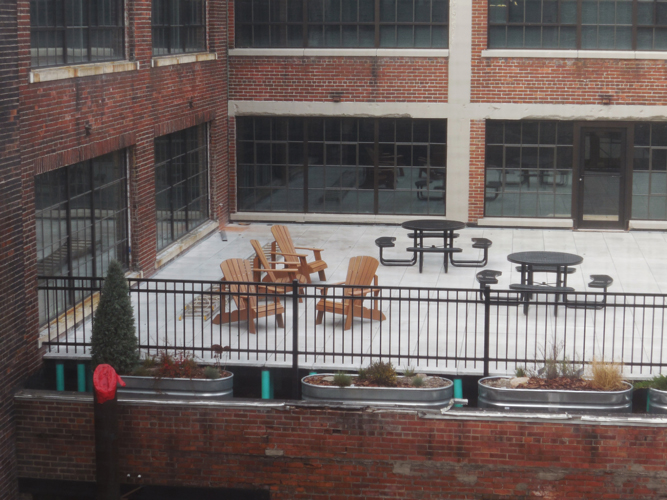 Lighting for the area was installed by Luminated Landscapes, and Tedeschi says the area incorporates both industrial-type and bistro lighting.

“When you come in from the street there’s a tunnel and they used some lights set in the walkway so it doesn’t seem so cavernous,” he says. “It creates a nice, soft light as you walk into the courtyard. Combined with the bistro lighting above the bench areas, it is really inviting.”

While Jacrist was completing work on the courtyard, the company was also hired to install a rooftop terrace on the fourth-floor rooftop (the building was started in 1901 and had several additions to it over the years with different heights).

The terrace area above the roof was created through the use of a PVC-type support topped with precast concrete flagstones. Along the perimeter, Jacrist installed 10 stock tanks as planters. Each tank was planted with an assortment of ornamental grasses, perennials and shrubs that would acclimate to the harsh exposed environment yet add to the relaxed atmosphere of the deck. Adding to the challenge: the fourth floor doors hadn’t been cut yet onto the new terrace, so the Jacrist crew and all the materials had to be lifted by boom lift onto the work area.

“That was an experience we weren’t counting on,” says Tedeschi.

Moving indoors, Jacrist also supplied the landscaping for a large area on the third floor of the building that had been converted into an atrium for the offices on the third, fourth and fifth floors and covered with a greenhouse-glass roof.

“Working with Kelly O’Connor of OCG Interiors, we put in many large planters, including one that was hand-built from wood we had at the factory,” says Tedeschi. “It’s about 16-foot by 25-foot and features a perimeter wooden bench that was constructed from reclaimed lumber.” 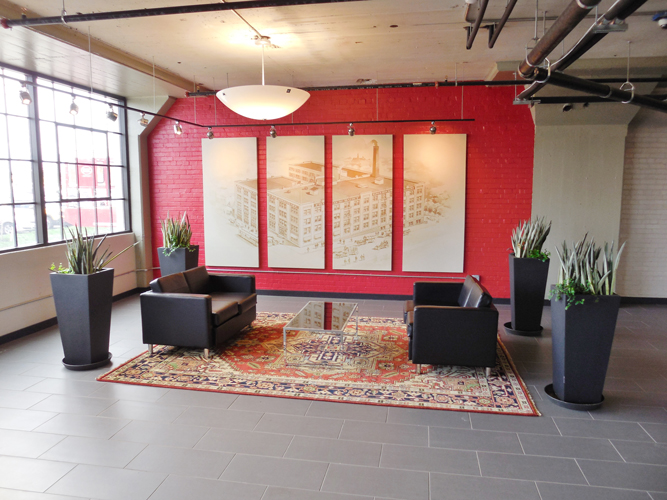 In it Tedeschi installed baby tears, creeping ivy, liriope and other foliage plants.

“With moss-covered boulders and rocks, there are some interesting textures,” he says. “We also installed a Zen-themed seating area that features a concrete floor fountain to create a nice background sound that echoes throughout the atrium.”

In all cases, including each floor lobby, Tedeschi was careful to select plants that didn’t require much maintenance — which Jacrist is currently providing.

“It didn’t make sense to use high-maintenance plants in a commercial environment, and I wanted a natural look,” he explains. “I focused on interior plants that would do well but not require constant vigilance, while providing multiseasonal interest.”

Other than the period of daily trips onto the fourth floor terrace work site by the boom lift, Tedeschi says the biggest challenge the project presented was simply that it was a commercial one with a short window of time to get the work done. Atypical weather conditions allowed Tedeschi and his employees to start the work in October and finish by the end of December.

“Sometimes you get change orders that complicate things,” he says. “Having to get different companies scheduled to do the work and still get contracted work completed on time made it trying, although in the end it all ran rather smoothly.” 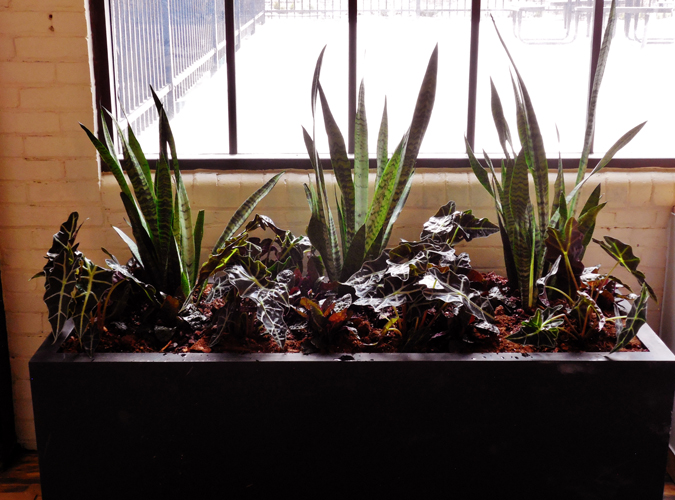 As for the results, Tedeschi couldn’t be more proud.

“As I sit back and know what the place looked like when we first began, and now when I’m there to hear people complimenting the site and say how nice it looks is really fun,” he says. “It was such a mess when we first started, and this was really a transformation. Having the privilege to be a part of this project was such an honor and was really rewarding.”

He notes that the building now has a waiting list for tenants. Even more satisfying, Jacrist has been hired by Savarino Companies to do a new riverfront project also combining commercial and residential uses. Work will start there in early October 2016.

Previous post The Next Business-Busting Recession is on its Way