Story of a Landscape: Bluestone and Planting Beds Create an Urban Oasis

Classic landscape for a classic home in Seattle.

Sometimes a job just comes together, and the result is near-perfection. For Rob Boyker, owner of Avid Landscape Design and Development LLC, that job could easily be the renovation of the Seibly-Savage residence landscape.

The rework of the corner lot near downtown Seattle, Washington, has not only given Boyker a great deal of personal satisfaction, but netted him and his company a 2015 Award of Distinction from the Washington Association of Landscape Professionals. 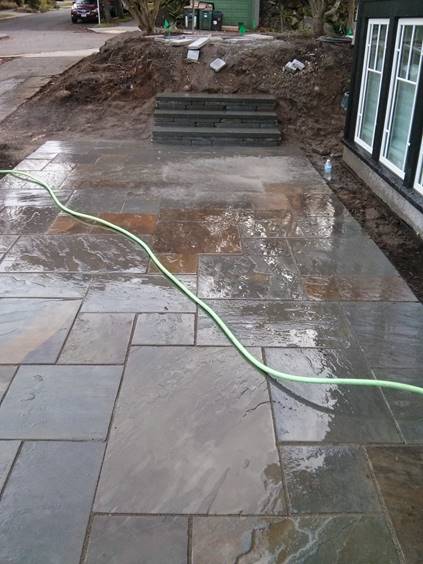 Boyker admits the lot was a mess when his company was called in by Martha Obenauer of Sage Design, who designed the project. He says the original landscape had been poorly designed and poorly maintained. And that was before the new owners completed a renovation project on the home itself.

“The homeowners had recently remodeled their basement, and in the process they tore up a good portion of the yard on one side,” he explains. “They then decided they’d better redo the landscaping. Since they had to redo half of it, they decided to just do everything.”

Avid works closely with Obenauer and installs probably 90 percent of her design projects, Boyker adds. That familiarity with each other gave him and his crew some leeway in what became the final design, especially with the hardscape aspects of the job.

When Boyker first saw the job site, a tumbled Pennsylvania blue flagstone pathway had been taken out and the stones stacked.

“They wanted to put in a patio that they could sit on, and they had all this tumbled blue flagstone,” he says. “They also had a gradient issue, so I suggested we create a wall out of it to level off the area for the patio.”

That stone was ultimately dry-stacked to create the lower corner of what became the patio.

For the remainder of the project, Obenauer had originally specified slabs from Abbotsford Concrete Products Ltd. They were to be used for the walkways, the patio and some parking strips. However, once on-site, the look seemed too contemporary for the style of the house.

“At that point, I suggested they use Pennsylvania bluestone,” says Boyker. “It was a little more expensive, but I brought them some samples, and they really liked that look, so that’s how we did all the hardscape.” 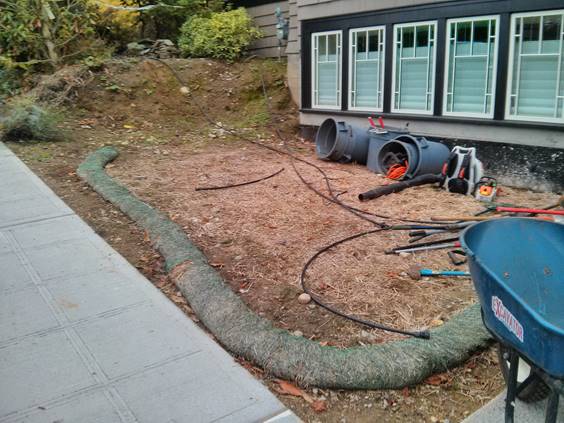 That includes the parking strips, and the 10-foot-by-16-foot patio, which were done in a dimensional stone. Steps at the front of the property were created from what the supplier calls “tumbled planking,” with dimensional treads on top of that. The patio is dry-set.

“We used a 1/4-crushed rock for the base,” Boyker says. “The seams are tight enough we didn’t treat them with anything other than a little bit of sand. There’s nothing polymeric involved or anything like that.”

The property not in hardscape is done in planting beds with a diverse scheme and supported by a drip system with micro-sprayers off the main water line. It also has a rain sensor. 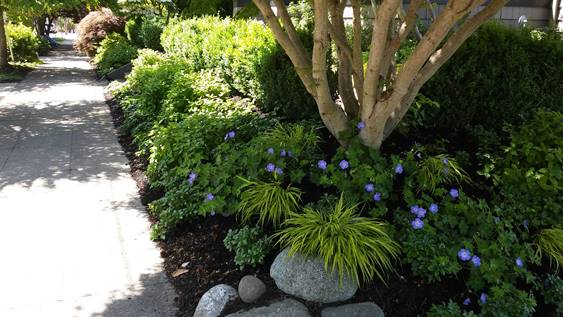 For instance, the area surrounding the patio is planted with H.M. Eddie yews; at their base is Veronica Georgia blue. And, on the inside of the patio against the house is orange sedge.

“On the front sidewalk side — it’s about a 45-degree slope — we planted pachysandra and white hydrangeas,” Boyker says. “At the top of the front slope we did a row of Japanese holly and boxwoods. Inside of that is a walkway where we have mock-orange, hens-and-chicks, mondo grass, saracocoa and oak-leaf hydrangeas, among other things.”

Boyker says it took him and a three-man crew approximately two-and-a-half weeks to complete the job, and because of its urban setting, the biggest issues were parking and pedestrian traffic, including school children. 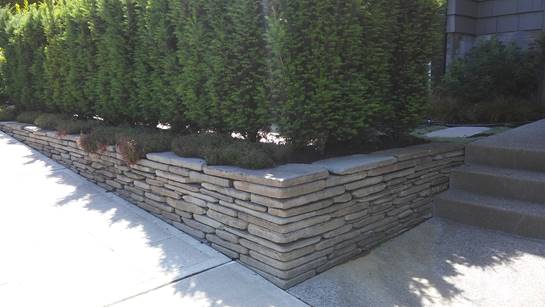 Boyker estimates the cost of the job, including the designer’s fee, was approximately $60,000. Of course, the fact that the job turned out so well is a big plus.

“It’s a very lovely old house, a kind of classic Seattle house, and before the landscaping, you couldn’t even see it; it wasn’t very welcoming,” he says. “This all came together wonderfully, and the planting plan has turned out to be very appropriate.”

That combination has also reaped other benefits for Boyker and Avid. For one, the company has taken over maintaining the landscape, and while the compliments the crew receives working on the property are appreciated, it’s also resulted in several other maintenance contracts in the neighborhood. 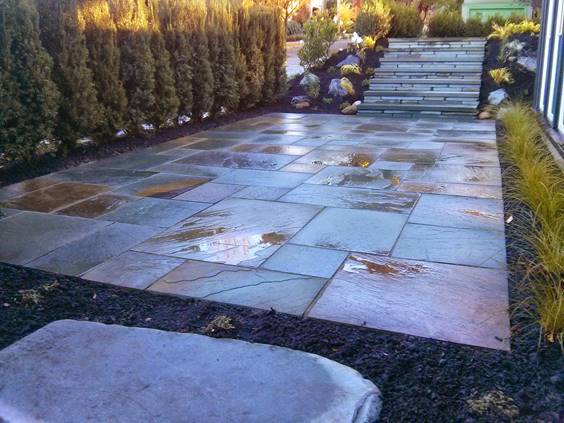 However, the way it was planted is also keeping maintenance to a minimum.

“There hasn’t been a need for a lot of pruning because of the way it was planted using the right plants in the right places,” he says. “It appears to be a high-maintenance yard, but it’s really low maintenance and it will get even lower as the pachysandra fills in. There will be less weeding and less need for the irrigation system.”

Previous post Beyond the Book: Reading Through A Lifetime With U.S. Lawns President