This landscape designer finds that demolishing a site to have a fresh slate for a new landscape isn't always necessary.

Landscapers dream of wide open spaces covered with rich soil waiting to be shaped, molded and planted into something artistic.

Clayton Johnson, a designer with the Bloomington, Minnesota-based Yardscapes, Inc., proves you don’t need a blank space, or even much space, to create an award-winning masterpiece.

Johnson, whose renovation of a residential landscape in the Cedar Lake neighborhood earned 2017 honors from the Minnesota Nursery and Landscape Association, says the clients – who found Yardscapes via the internet – were looking for an update and to add curb appeal to their property. 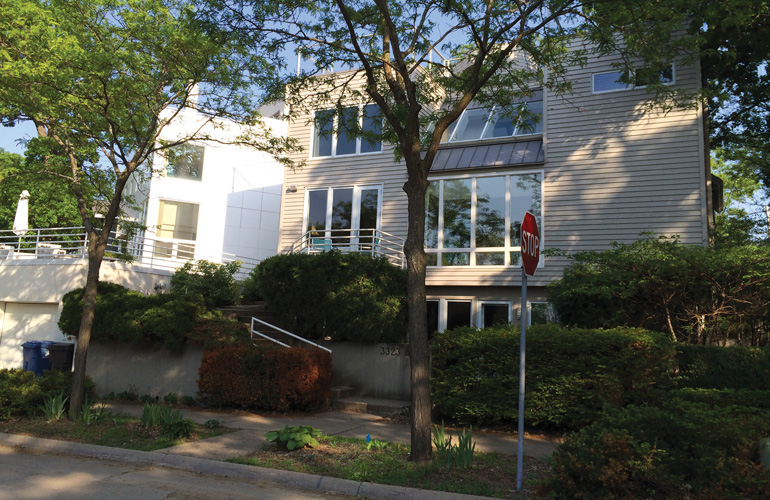 A frontview of the property before the renovation. Photo: Yardscapes, Inc.

“The existing landscape was really overgrown and did not offer any curb appeal to the house,” he says. “They wanted to enhance the curb appeal, add a sense of entry and since the home is a bit more modern-looking, they also wanted to try to develop a bit more of a modern theme with the project.” 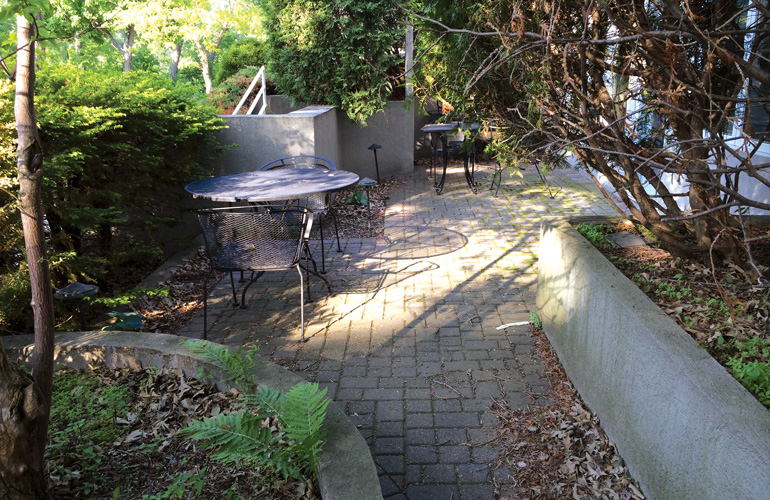 Despite the small urban setting, the project broke down into three components, which Johnson skillfully tied together. By far the largest and most apparent is work on the overgrown lower terrace. However, the project also included improving the home’s entrance approach and enhancing the rear garage door area.

While removing the existing plant life and the paver terrace it overpowered was a start, Johnson faced an added challenge in that the clients were looking for a place to lounge and entertain adjacent to a relatively busy sidewalk.

“They liked the idea of having a sense of separation between the lower patio area and the sidewalk,” Johnson says. “Yet, they didn’t want so much of a separation that it was completely cut off from the sidewalk.” 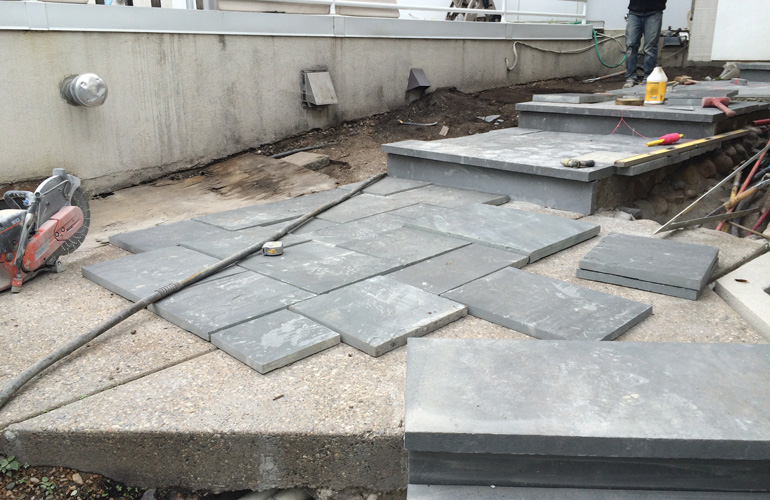 The site while in the middle of working on the paver portion of the project. Photo: Yardscapes, Inc.

The answer: a fence made of steel tubing which was powder-coated to coordinate with various aspects of the overall color scheme, most notably the bluestone pavers used for the terrace and the steps leading to the front door.

“The bluestone in our climate is a great natural stone product,” says Johnson. “It stands up to our climate and freeze-thaw cycles. This bluestone is a bluestone select, which is a straight color which, along with complementing the color of the steel posts, also complements the water color from the nearby lake.” 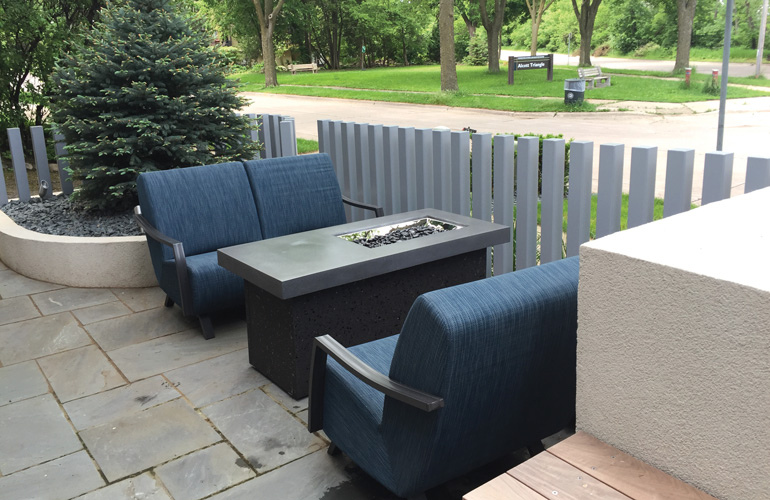 With a table and benches, the setting gives something of the feel of an outdoor bistro. To further enhance the area, the existing planters were treated with a new coat of stucco, a 15-foot granite countertop was added to the stucco wall under the second story deck to provide a serving area and a custom-built ipe bench painted the same color as the steel tubes adds seating.

As a further modern touch, the house number and street name in stainless steel is mounted near the entrance stairs to the home. Johnson says that was driven by necessity.

“With the front door being tucked at the side of the house, delivery people tended to have difficulties finding the home,” he says. “Quite frankly, people had a hard time deciphering which house it was.” 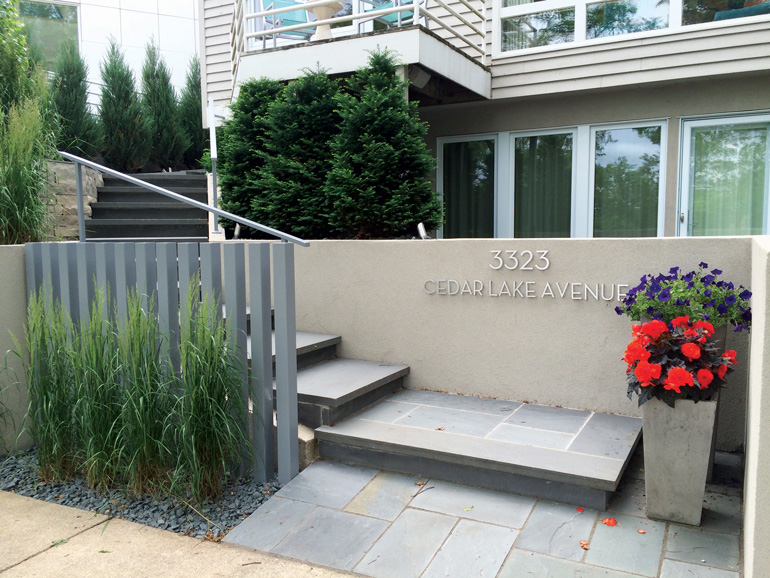 Stairs leading to the front door, which were an exposed aggregate, were topped with the same bluestone used on the terrace.

More steel tube fencing and new handrails help tie the entry back to the terrace patio.

The final area of the project — the back garage door area — is entered through a custom steel mesh gate flanked with additional steel tubes, which are also used to mask the air-conditioner. However, Johnson opted to separate that space from the neighbor with a custom cedar screen. 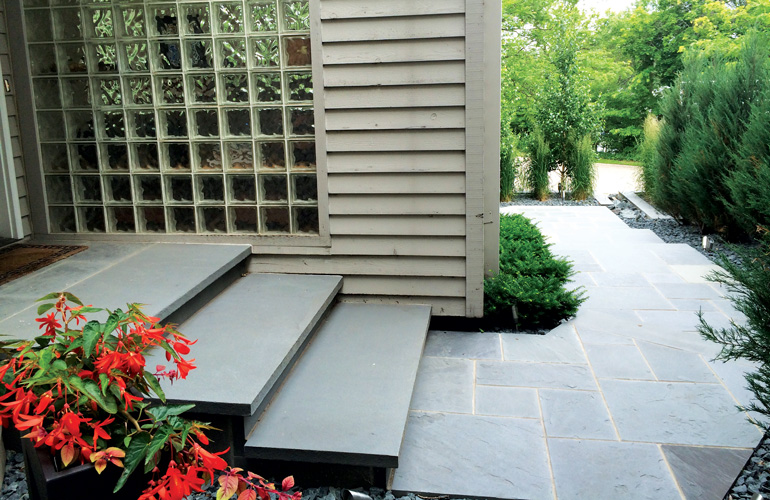 Bluestone delineates space for the clients’ outdoor grill, and artificial turf provides an area for the family dog. Johnson says the clients chose to leave the grill in the back because of its proximity to the kitchen, rather than moving it to the street-level terrace.

“We chose to go with artificial turf due to the size of the area,” adds Johnson. “It’s also relatively shady and with the dog doing his business there, natural grass wouldn’t sustain very well.”

The project does come with an irrigation system, however, and an extensive lighting system, primarily up-lighting, helps illuminate the project at night.

“Lighting was a concern,” he says. “It’s a relatively dark area, but it’s also a heavily used sidewalk that leads to the lake, so the lighting offers some safety and security, as well as enhancing the architecture of the home.” 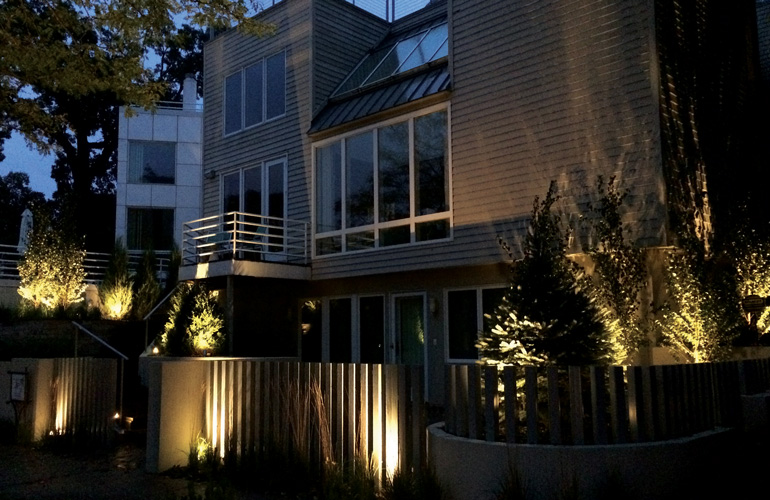 Nightlighting was installed as part of the new landscape design. Photo: Yardscapes, Inc.

Another important component of the job is the plant palette, which Johnson changed completely from the old landscape.

“We have Skyrocket Junipers that begin to separate the front walk from the neighbor’s terrace, some Dakota Pinnacle Birch trees that offer vertical height without getting too wide, and some Karl Foerster grasses which offer height and texture without taking up a lot of width,” Johnson explains. “I like to think it’s a nice combination of evergreen material, deciduous material and perennial material offering a year-round complement.”

It’s those combinations of material usages, along with being able to adapt his design to an existing site of which Johnson is most proud.

“It’s just the overall uniqueness and creativity of pulling the different elements together and making them work in conjunction with one another,” he says.

However, there’s one element that particularly shines for the designer.

“The steel post feature is really unique,” Johnson says. “It really stands out in my mind.” 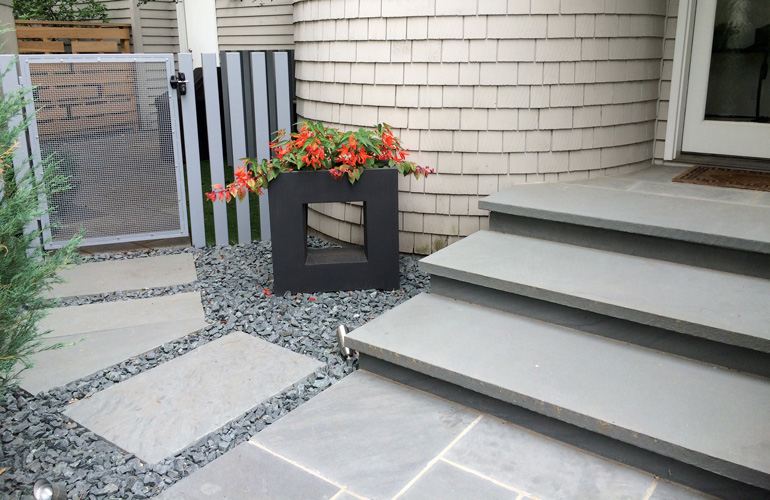 The overall job took between six and seven weeks, he says, and involved anywhere from three-to-five crew members at any one time. And, Johnson admits the small site was the largest challenge with the job.

“Dealing with the different elevations was part of that,” he says. “But, during the construction process it was a challenge in terms of staging material and then doing the construction in tight spaces. We had to utilize the front boulevard for a lot of it, and we brought in materials on a daily basis.”

However, he says the job has also taught him a valuable lesson: sometimes it’s not necessary to totally clear an existing location.

“From a design standpoint, I’ve found that I shouldn’t feel I need to completely demolish a site,” he concludes. “I can still make a significant change to it.”

And, a prize-winning one at that.

Previous post What's In My Truck: Oasis Turf And Tree