Customer demand for landscape lighting led Olympic Landscape and Irrigation Co. in Puyallup, Washington, to add the service two decades ago. Lead designer John Sullivan says the company spotted potential for lighting to round out its menu of offerings and create a new revenue stream. Clients responded positively. “By and large, our customers appreciate knowing that we offer this service,” Sullivan says.

Lighting has made Olympic more of a one-stop shop, and it has contributed to the company’s bottom line, he says. Sullivan describes the service’s growth as steady and strong.

Selling lighting can be a great revenue driver and the ideal complement to a landscape business. Several contractors who have been successful in the lighting segment share their sales tips and tricks. 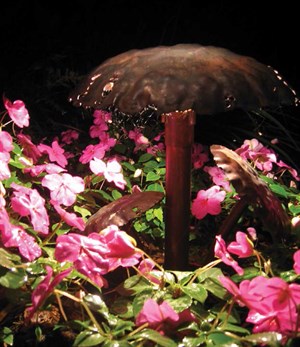 Michael Kukol, president of Horizon Landscape Co. in Wyckoff, New Jersey, says the hesitation to jump into something new can lead to the big mistake of disregarding this potential profit center. “Lighting often isn’t as intimidating as it sounds to get involved with,” says Kukol, who has 20 years of experience providing the service. “Many find that lighting is a natural transition to the services they’re already offering.”

For those just getting into the lighting business, suppliers can be a helpful source of information, says Marty DeNinno, president of Pinnacle Irrigation and Nightlighting in Haddonfield, New Jersey. If they can assist with the first couple of jobs, this will help diminish the initial learning curve. But hands-on experience in the field is the best teacher, he says.

Contractors can look to their client base as the starting point for selling lighting as an upgrade, Kukol says. This strategy is often more effective than seeking new customers.

Sullivan says most of Olympic’s lighting jobs are sold as part of an overall landscape package, although customers who are renovating or adding to their landscape also are likely to consider lighting. Lighting is proposed on every installation.

“When we propose landscape installations, we itemize the proposal into categories, including site work, hardscape, plants, water features, sprinkler systems, mulch, cleanup and lighting,” he explains. “There is a cost for each of these listed separately. The owner may elect to do the landscape in phases—say, do only part of the plants, delete the water feature or delete the lights in the first phase. This happens about half of the time, so it’s not uncommon for lighting to be delayed until the second phase.” 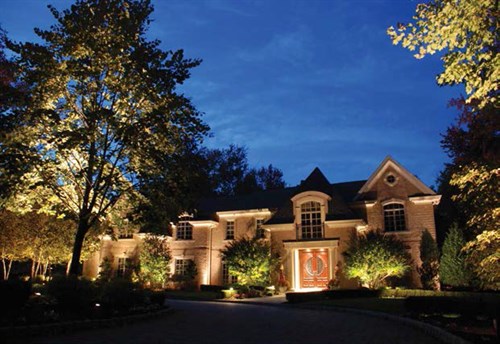 Kukol says nothing sells better than a demo. While on site for irrigation work, his salespeople will talk to clients about lighting and ask to provide a quick demonstration, he says. “Once they actually see what it looks like, it’s often an easy sell from there,” Kukol says.

Visuals drive sales, DeNinno agrees, especially when they are supported by marketing. Company signage on new installations as well as door hangers distributed in neighborhoods where crews are working can sell more jobs. “People buy what they see,” he says.

When directing prospective clients to see finished jobs, make sure the installations still look good, DeNinno recommends. “If the homeowner has knocked over a fixture and you don’t realize it, it could hurt your chance of getting that new job,” he says. 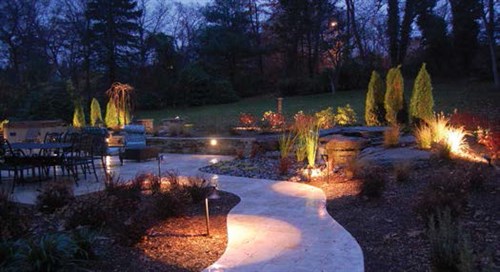 Use a professional photographer to capture top-quality images for sales and marketing materials, DeNinno advises. “Having nice photos on your website can go a long way,” he says. “It’s the next best thing to actually going to see a lighting job in person.”

As temperatures plummet, many people stop thinking about the exterior of their homes. Landscape lighting sales tend to cool off. “We find that things typically shut down for us by Thanksgiving, and that continues until about March,” Kukol says. “As soon as it gets nice out, people start thinking about their outdoor projects again. That’s often when lighting sales also pick back up.”

DeNinno says his season runs from March until the winter holidays. “Those are our prime times for night lighting jobs,” he says. “We can install a job right up until the ground freezes.”

Because fall is a slower time for his irrigation business, DeNinno gives lighting a strong push then. “Once summer is over, homeowners start thinking about potential fall projects, and lighting is a great one,” he says. “A lot of times, people like the idea of getting lights done before the holidays, when they’ll be having a lot of people over.”

Marketing should be a year-round job, contractors emphasize. One idea, Sullivan suggests, is to send mailers with monthly statements throughout the fall.

Marketing’s payoff might not be immediate, DeNinno adds, “but it keeps us fresh in homeowners’ minds. When the time does come to have lighting installed, we want them to think of us.”