This award-winning indoor/outdoor campus wellness center in California shows that a small project can make a big difference.

College students have probably always been stressed and sleep-deprived. It’s just that in recent years there’s been more of an attempt made to smooth out the bumpy parts of campus life.

So, when a study at California State University, Northridge showed students there were above average in those two health issues, they turned to a familiar firm to design what became the Oasis Wellness Center at the student union.

LPA, Inc., a multidisciplinary design firm based in Irvine, California, that had successful created the student recreation center a couple of years earlier was brought in to renovate what had been a computer center inside, and mostly empty open space outside.

The result: recognition with a Southern California American Society of Landscape Architects Quality of Life Award for 2016.

Rich Bienvenu, landscape architect and design director of LPA, says university officials saw the wellness center as having a yin yang relationship with the recreation center.

“They weren’t sure what the solution was,” he says. “We worked with the student union and with the client, and we had questionnaires we sent out. They had a lot of consultants who were doing studies and compiling data and they came back to us with a wonderful list of goals and objectives.

“They then worked with us to create a design and a vision that would fulfill those goals and objectives.” 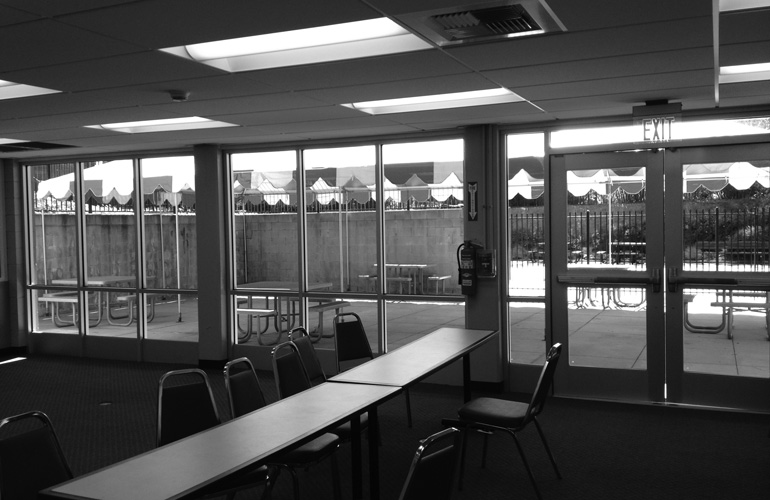 Before the renovation Photo: LPA, Inc.

Bienvenu says the outdoor components of the project — which were constructed by American Landscape Inc., of Canoga Park. California — required some imagination, in part because the approximately 15,000-square foot site was not accessible, and because the existing landscaping was less than inspiring.

“It was really a large area with a concrete pad sandbox in a truck tire,” Bienvenu explains. “They also had a dedicated student study space under an easy-up tent that looked almost like a small circus tent. It was really wasted space.” 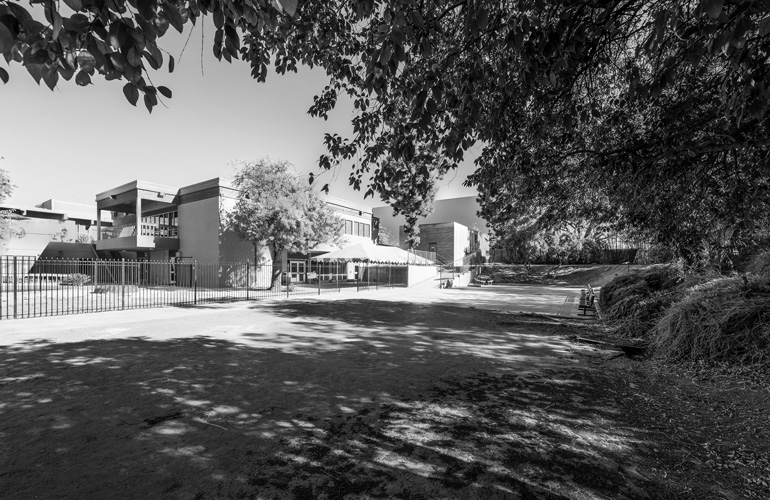 Before the renovation Photo: LPA, Inc.

After working with the students, consultants and university officials, it became clear that — just as with many residential landscape projects — the best solution would be a series of distinct spaces or “outdoor rooms” in which students could decompress.

“One of the things they said they needed was a garden, although they didn’t know what it should look like or contain,” he says. “The students came up with the idea of a labyrinth. The fireplace actually started as a fire pit, but the school was happier not to have an open flame.”

Although originally seen as being a place where students could simply sit and talk, the fireplace area evolved into a small amphitheater where groups could gather to take a class on meditation or nutrition.

The idea of a labyrinth generated a lot of conversations, Bienvenu says. While many people think of them as like a maze, one of the student representatives said his grandfather attended a church with a labyrinth and was always talking about his experiences with it.

“You’re following a path and you end up in the center,” the landscape designer explains. “It’s ritualistic and your mind has the opportunity to wander because you don’t have to think about where you’re going; you can get absorbed in other ideas. It resets the mind.” 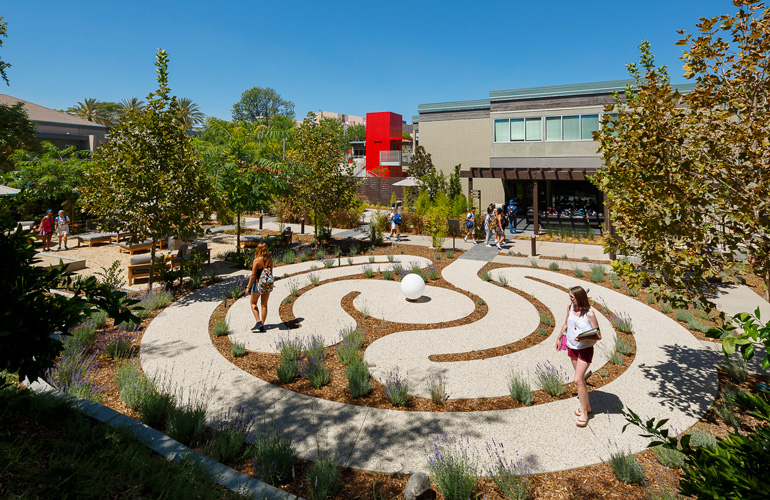 The CSUN labyrinth is made of concrete with a glowing orb in the center. Additionally, it’s one of the areas where the designers could focus on scents, incorporating plants beside the concrete that will help soothe the senses.

Instead of one garden, there are several in the exterior area of the wellness center. Although initially the talk was of a Zen garden, the finished design incorporates four separate gardens: the arrival garden, a contemplation garden, a mindful garden, and a radiance garden which includes the fireplace. There is also an outdoor lounge with a water wall.

Bienvenu says attention restoration theory describes how even a person in a building who can look out a window and see nature is calmed by the view.

“We kept on calling them little outdoor rooms, where the students can actually have exposure to nature, where they can actually touch it,” he says. “When students check in they’re required to leave their backpacks and turn off their cellphones. These are areas where two or three people — or even an individual — can just be silent and immersed in nature.”

For that reason, he says the entire plant palette for the exterior areas of the wellness center was very important and he and his team worked hard to come up with plantings that support the center’s mission.

“We had an idea that textures and colors would provide visual interest,” he says. “And, there are areas where it’s all about the scents — plants such as mint, sage and citrus trees. The other thing was we needed to use vertical elements — hedges and bamboo — to create the walls of the outdoor rooms.” 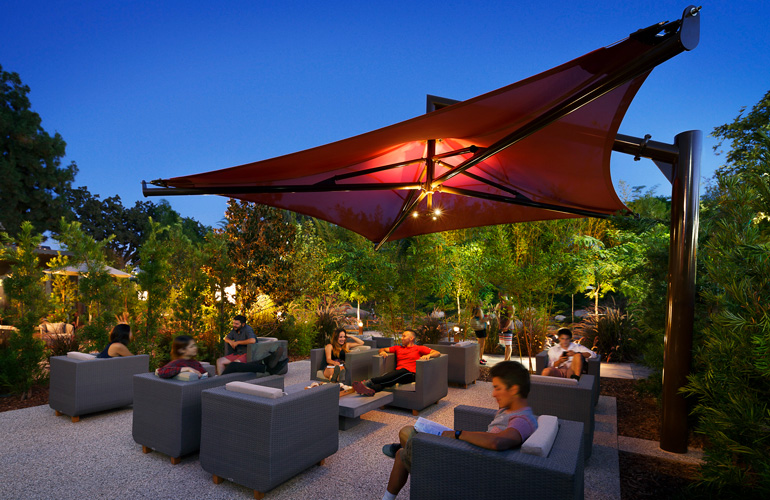 In that respect, the site did offer one distinct advantage. The university has an area at the perimeter of the site near its chilled water plant where a sustainable bamboo garden had been planted to make use of the mist from the water plant.

Bienvenu says the wellness center was able to use the Japanese Garden concept of “Borrowed Scenery” and the bamboo “forest” to help enclose the site.

The landscape architect says the setting for the wellness center — a below-grade site on the side of a hill that had initially been without ADA (Americans with Disabilities Act) — access turned out to be a gift.

“We created a new elevator and a stair tower,” he says. “But, once you descend into the garden it really is kind of secluded and very encaptivating. You get the sense that you’re in a unique space.” 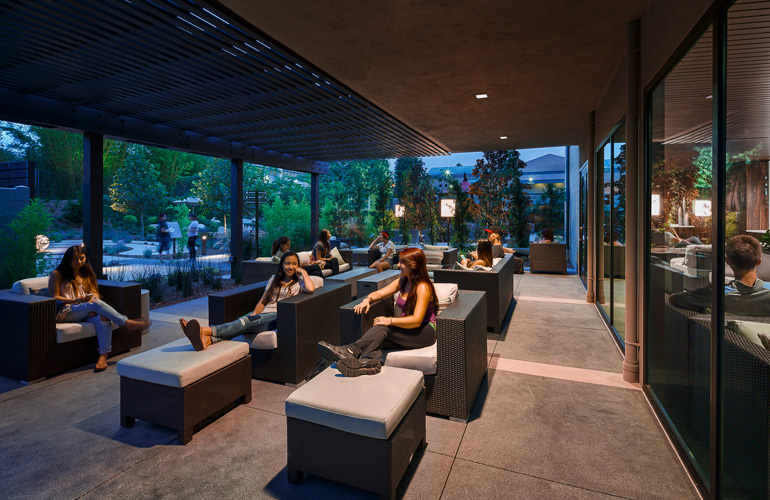 Working with the grade change was also the most challenging design aspect for the project, he says.

“The student recreation center is huge and looms over the campus,” Bienvenu observes. “This is a tiny space set into a bowl. However, we painted the elevator and stair tower CSUN red and it became a beacon on the campus.”

The whole space is wired with speakers to fill the area with soft background music, and lighting was also a huge consideration, Bienvenu says. LPA utilized both lighting engineers and lighting designers to maximize its role in the space.

“The lighting had to be a complement to the moods we were trying to set, as well as the landscaping,” he says. “We have a lot of little LED lights and toe kicks and low bollards. It’s all very subtle and much of it is at the foot level.” 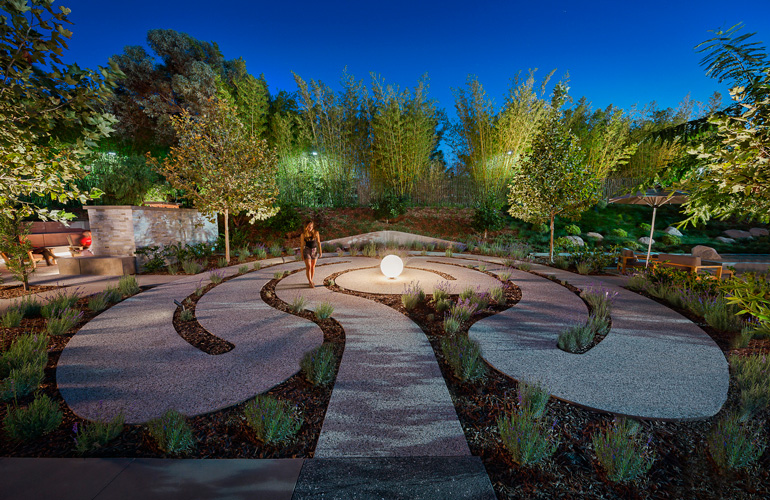 Overall, the project has gotten a lot of attention not only from other colleges and universities, but also health care providers and even corporate campuses.

He says from his perspective, it shows a small project can make a big difference, in this case not only in the students’ lives, but also in the school’s commitment to lifelong learning and wellness.

“I’m also proud of the fact that this project elevates the role that landscape can contribute to a student’s life,” he concludes. “We helped come up with the programs through the landscape, and we created these outdoor rooms to be used by the students and faculty to reduce the stress of everyday life. It’s designed to be a very flexible space where they can also have an art class or a lecture on nutrition. The landscape is serving a critical role for the students.”

Tags: American Society of Landscape Architectslandscape lightingStory of a Landscape

Previous post How Drones May Change Landscape Construction and Design 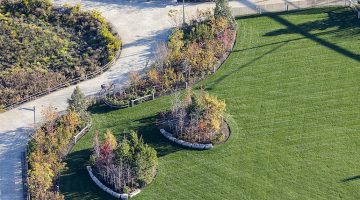