Story Of A Landscape: Creating A Zero-Maintenance Landscape

The design and installation of this property required some reasoning with the neighbor.

What would you do if a potential client called and asked you to design and install a zero–maintenance landscape? If you’re like Rebecca Winn, you’d laugh.

“I told her it was like asking for zero-maintenance children,” says the owner of Dallas-based Whimsical Gardens. “It’s living things.”

Although Winn hit it off with the client, who was calling from La Jolla, California, about a second home in a community northwest of Dallas, she asked to think about whether such a thing was possible.

“During our conversation, I found out that she had lived in Japan on two or three occasions,” says Winn. “My mind started percolating. I called her back a couple days later and said that I wanted to do her landscape, ‘and I’ve got some great ideas.’” 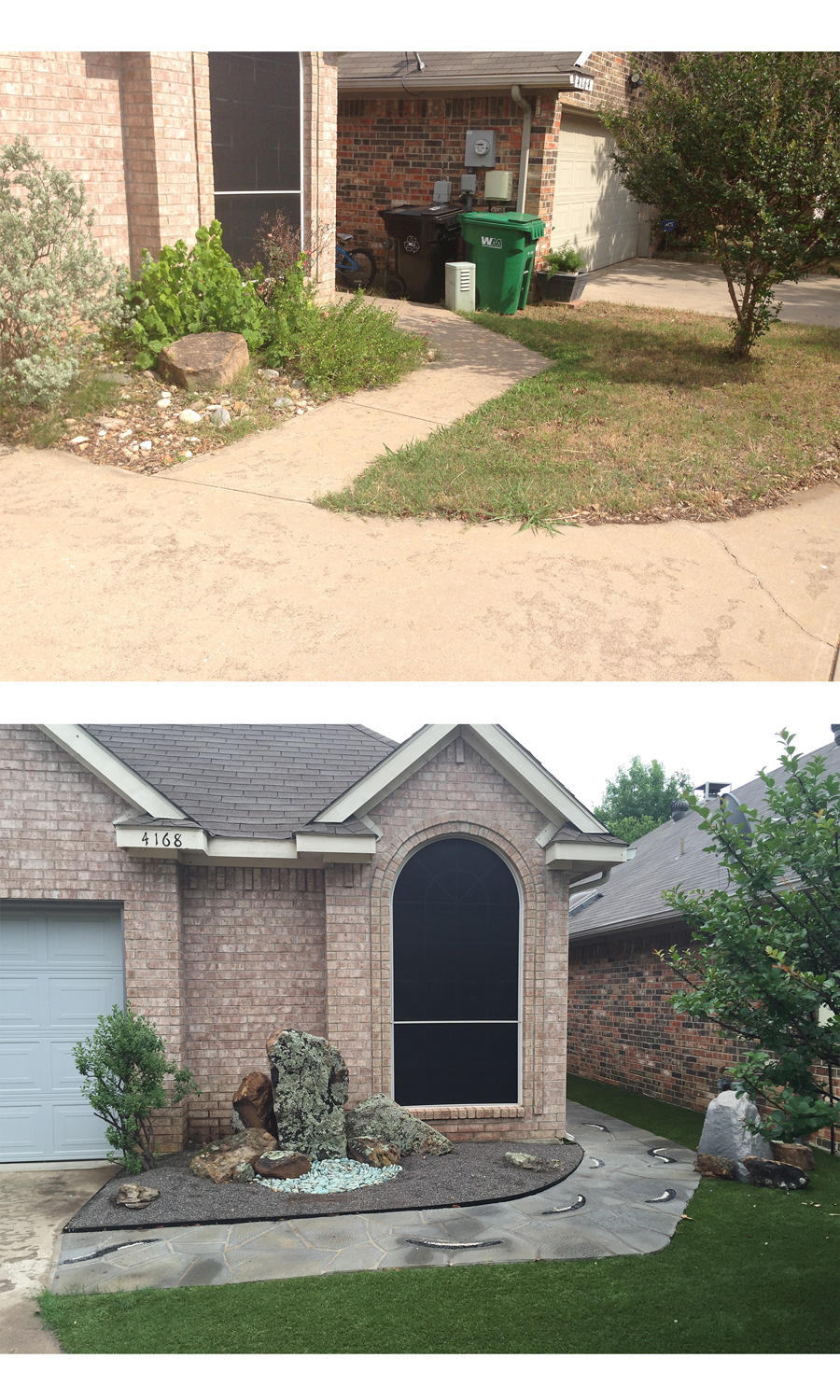 Winn needed all her powers of imagination for the project. Not only was the client looking for no maintenance, but being a second home she visited for only a few days every four to six weeks, she didn’t want to spend a huge amount of money.

The site presented its own challenges.

“It was sort of zero lot line, but the houses are not attached,” she explains. “There’s a tiny strip between each house. The garage door was on the front. You’d walk down the side of the house about half way and there was the front door.”

Additional challenges include a gas meter, the neighbor’s trash cans and weeds that were knee deep.

Because of the client’s budget, the decision was made to do the project in phases. For the first phase, Winn concentrated on the area from just past the front door forward. An important part of the job was installing a gate just beyond the front door to separate the front of the lot from the back.

“I designed a mountain gate made of COR-TEN steel,” she says. “I had wanted to tear out the walkway and curve it and do one of those pebble mosaics so it looked like a river winding out of the mountain. The client was all over the idea, but it was going to be expensive, so we didn’t do the walkway.”

In keeping with the idea of no maintenance, Winn began researching the possibility of using artificial turf for part of the lawn. She says although she initially recoiled at the idea, the product has improved greatly in recent years.

Ultimately, the artificial turf was installed in the front of the house around an existing crepe myrtle tree and on both sides of the sidewalk leading to the front door.

“I had to do a diplomatic intervention with the neighbor because it was important to me that he keep his trash cans in the garage except when they needed to go to the street,” she says. “I explained that she would put this expensive turf on his side of the walkway and pay for it, and he agreed.” 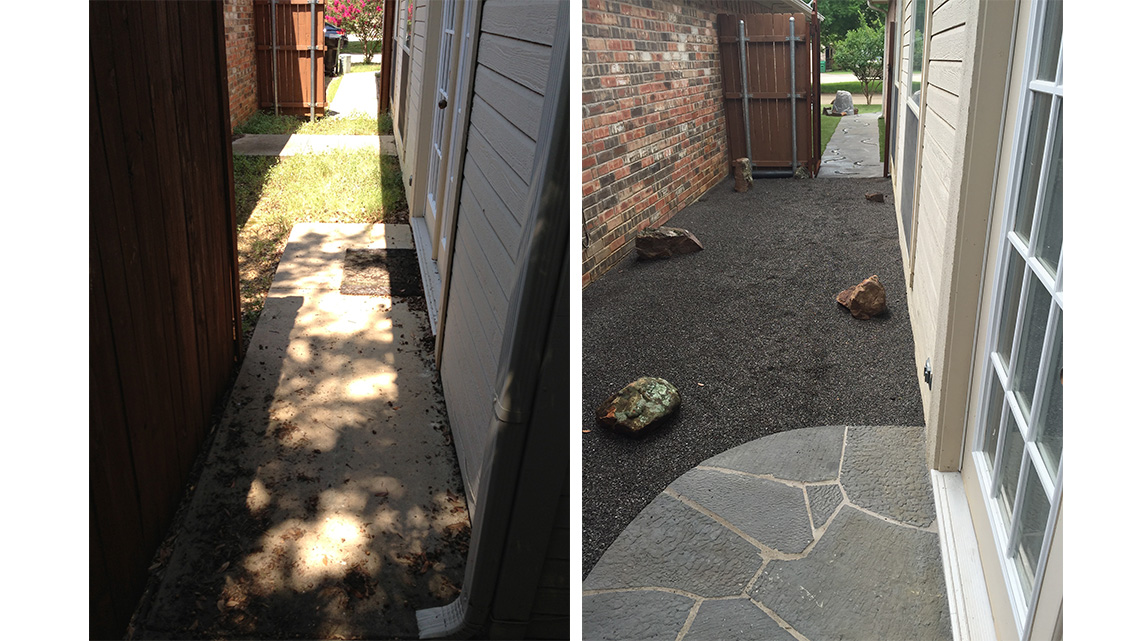 The final area in the front revolved around a planting bed which supported a Texas sage plant. The durability of the Texas sage and the crepe myrtle, and their ability to survive without any supplemental water convinced Winn to leave both.

“In this small bed, I did a Zen-esque boulder arrangement,” Winn explains. “I found some boulders that had a beautiful silver-blue lichen on them which is gorgeous with the silver in the Texas sage. I surrounded it with black decomposed granite, and then at the base of the boulders I did a little pool of the aqua-blue jade pebbles from Indonesia so it looks like it’s rippling out from that.”

She describes that part of the job as particularly labor intensive, and says she and her three-man crew spent about two weeks on the site for the first phase of the project, even though the installation of the artificial turf was subcontracted out and the fabricator installed the gate.

A few months later, Winn and the Whimsical Gardens crew returned to take on the backyard, which revealed that the home had been placed several inches lower than the adjacent alley and its shielding fence.

“You can imagine the drainage problems,” she observes. “Then, the developer had poured a concrete pad off the back of the house that connected to nothing. I suppose it was a patio, but it was weirdly placed and became a channel for water to flow under the house.” 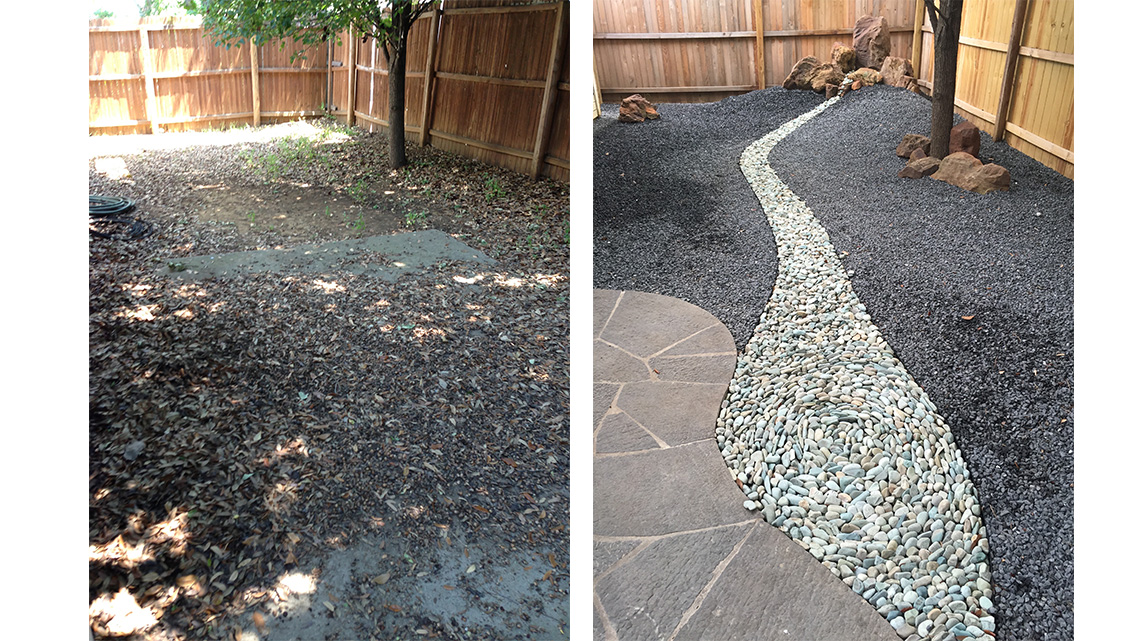 The result was another mess of weeds and mud, broken up by two pear trees. Winn says the first order of business was to jackhammer out the concrete pad and then construct a large French drain next to the house.

“Then we built a new, beautiful patio from Silver Mist gray limestone with pretty lines and curves,” she says.

The hand-cut stone patio takes in about a quarter of the backyard and curves around the side of the house to the entrance to its breakfast room. Then, on the far corner of the backyard, Winn had her crew build up the ground, and using a black Tejas gravel built another boulder outcropping with a jade pebble pool. She then utilized the jade stone to wind through the garden like a river that ends in another pool that meets the new patio.

“The whole backyard is gravel,” Winn says. “We took the French drain out to the side and beyond that outcropping of boulders and it disburses back into the garden, except the flow is now broken up by the gravel and the rocks so it has time to sink into the ground.” 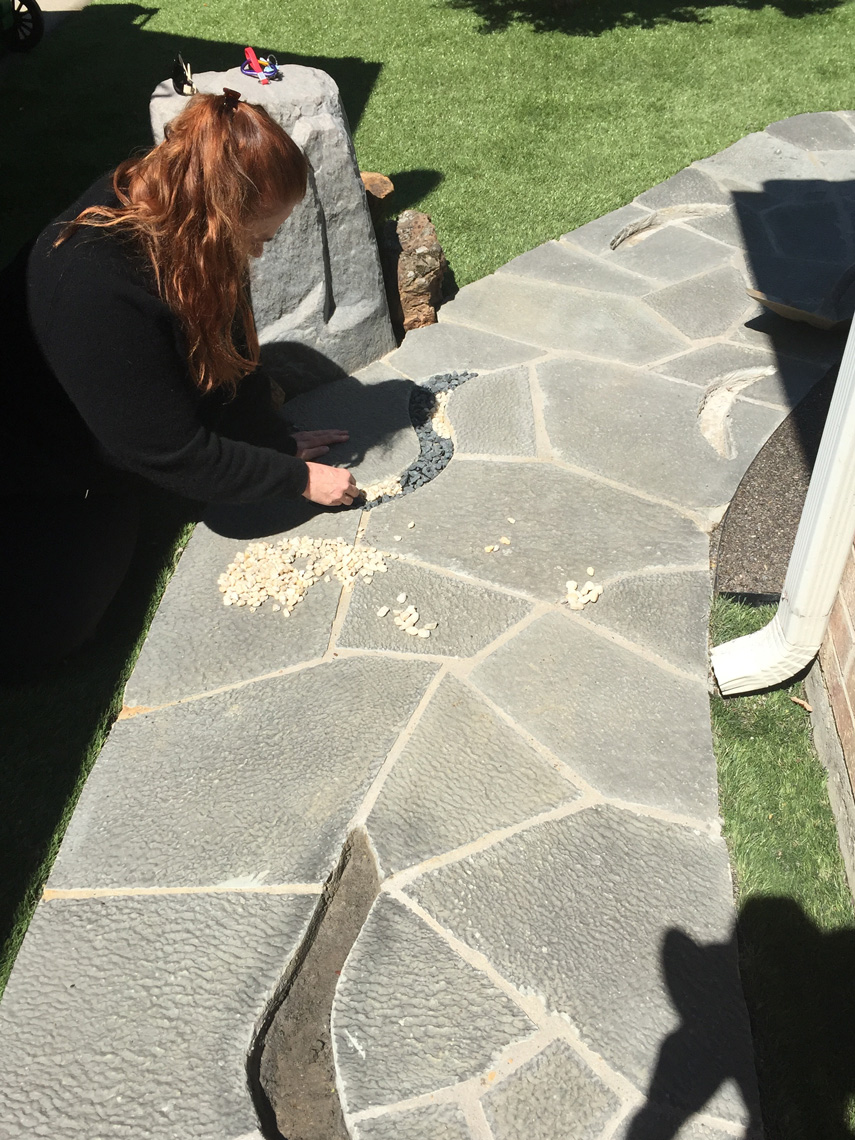 Just behind the gate, and visible from the home’s breakfast room was another slab of concrete that ran between the two houses, and Winn says the client asked that it not be removed. Rather than leave it visible, she covered it with black roofing paper. Since the side yard was to be a ranking meditation garden, the paper effectively held the covering black decomposed granite in place.

The area is also set off by additional boulders.

The backyard phase of the project took approximately four weeks, and Winn says of all the challenges the $30,000 project offered – beyond the original concept, of course – the biggest was access.

“I don’t remember how many tons of black Tejas gravel we had to wheelbarrow back to the backyard,” she says. “That, and it was summer in Texas. One day we were working it was 112 degrees.”

Still, the job left both women happy and earned an honorable mention as a special project in the 2016 competition sponsored by the Texas Nursery and Landscape Association.

“It was a fun project,” says Winn, who adds she’s especially proud of being able to meet her client’s challenge of a zero-maintenance landscape.

“Certainly, my kneejerk reaction was it’s not possible,” she says. “It was fun being able to answer her need with something beautiful and interesting and also completely different than anything I’d done before.” 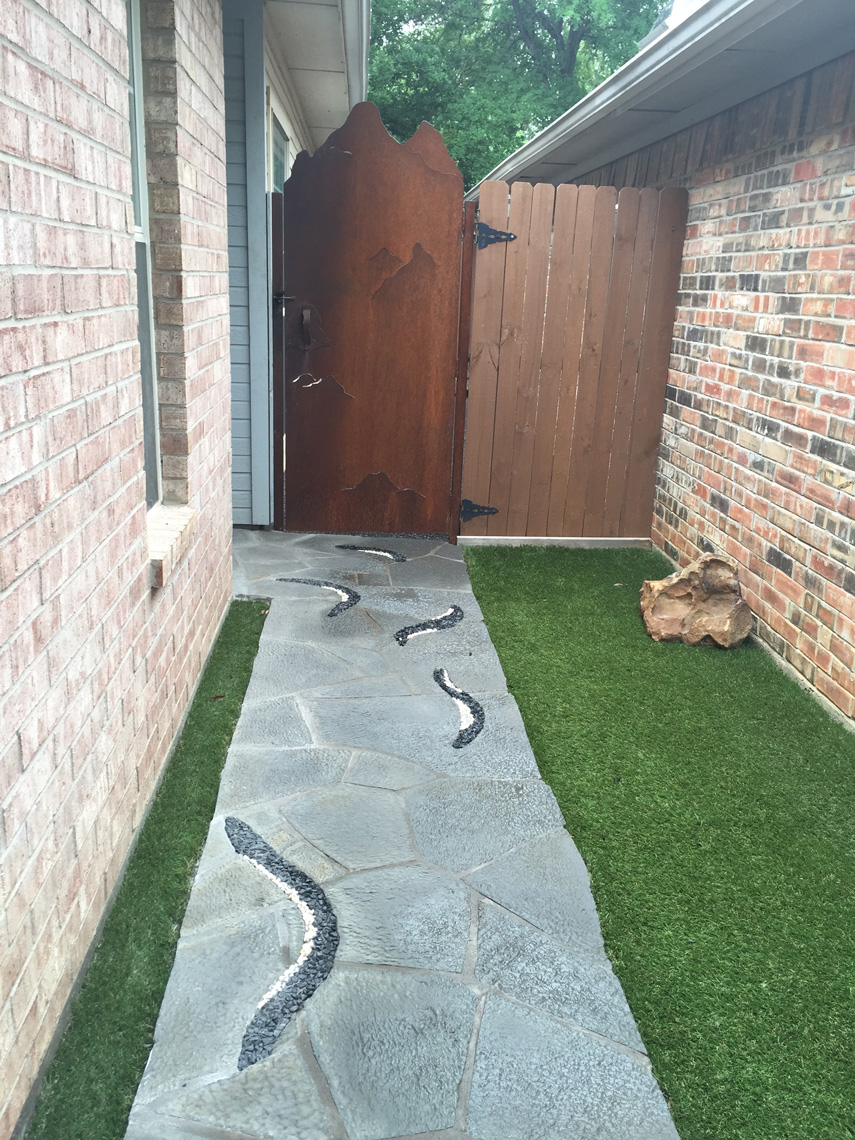 And, while she acknowledges it’s not a traditional Japanese garden, Winn believes it does expand how people should think of xeriscape landscapes.

“A lot of people object to the look of xeriscape designs,” she says. “They like the idea of xeriscape gardens, but they don’t want to feel they’re living in the desert, and so often that’s the look. This is a whole other way of having a no-water-use garden.”

Ultimately, though, she was able to tie it into the client’s previous life experience.

“If she had lived overseas three times, but it had been in Switzerland, this project wouldn’t have worked out nearly as well,” Winn says. “It was just fulfilling to me.”