Story of a Landscape: A Front Yard Patio Worthy of Publicity

Located in a suburb of Chicago, this front yard patio design has won multiple awards.

When the clients came to him in 2013, they weren’t asking for much, according to landscape designer George J. Murphy.

“Their exact words were that they wanted something that would look like it could be in a magazine,” Murphy says. “It’s now been in four magazines, so I guess I’ve done my job.” 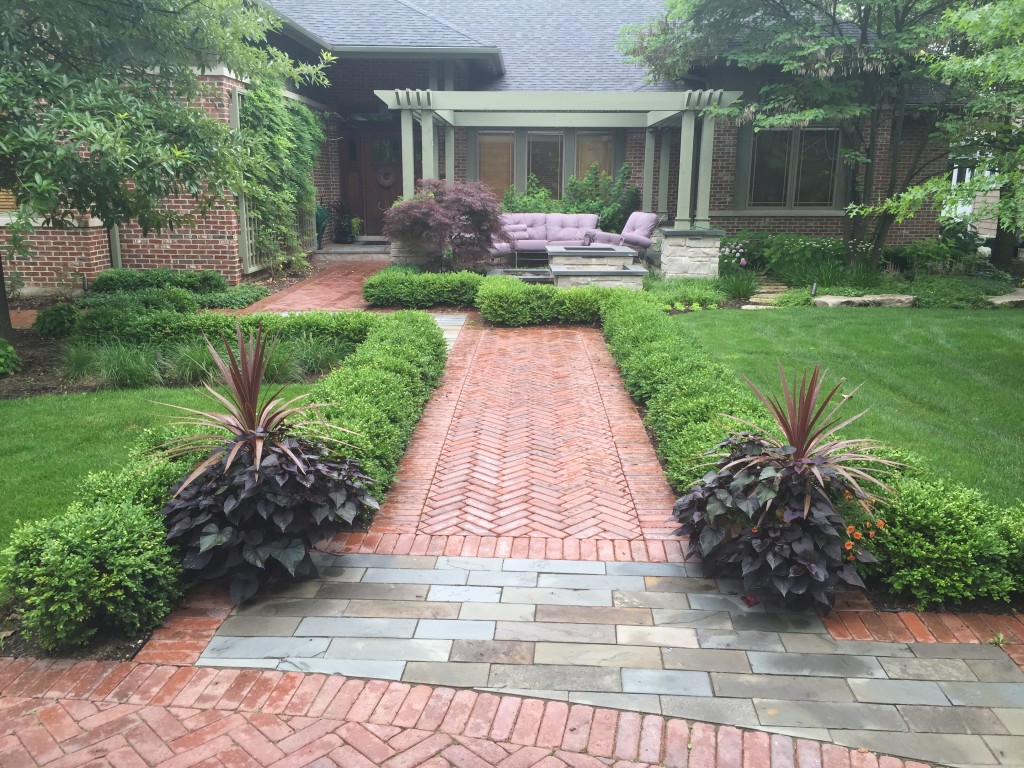 However, the plaudits don’t stop there. Murphy’s design, which was installed by his employer, Bruss Landscaping, Inc., has also been recognized by Hardscape North America as its Residential Clay Brick project of the year for 2014, and by the Brick Industry Association with a gold award in the area of paving and landscape architecture for the 2015 Brick in Architecture Awards.

Despite becoming such a high-profile job, Murphy says it was a rare one in that the clients are, “the best people to work for and never had a negative word about anything.”

But then the owners of the property, located in nearby Downers Grove, have been utilizing Bruss since they built their prairie-style home in the early 2000s. Murphy’s boss, company owner Eric Bruss, designed and installed the original landscaping. 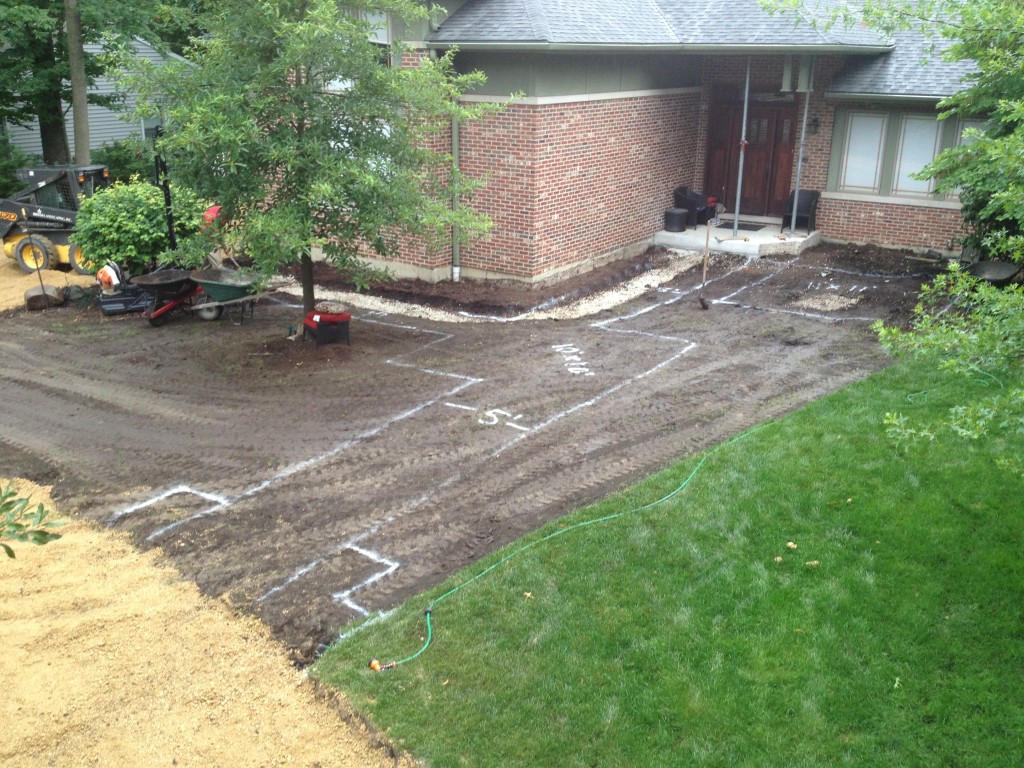 The company also maintains the property, and Murphy says they had a comfortable, ongoing relationship before they told him they were ready to do this particular project: in essence a front yard patio. 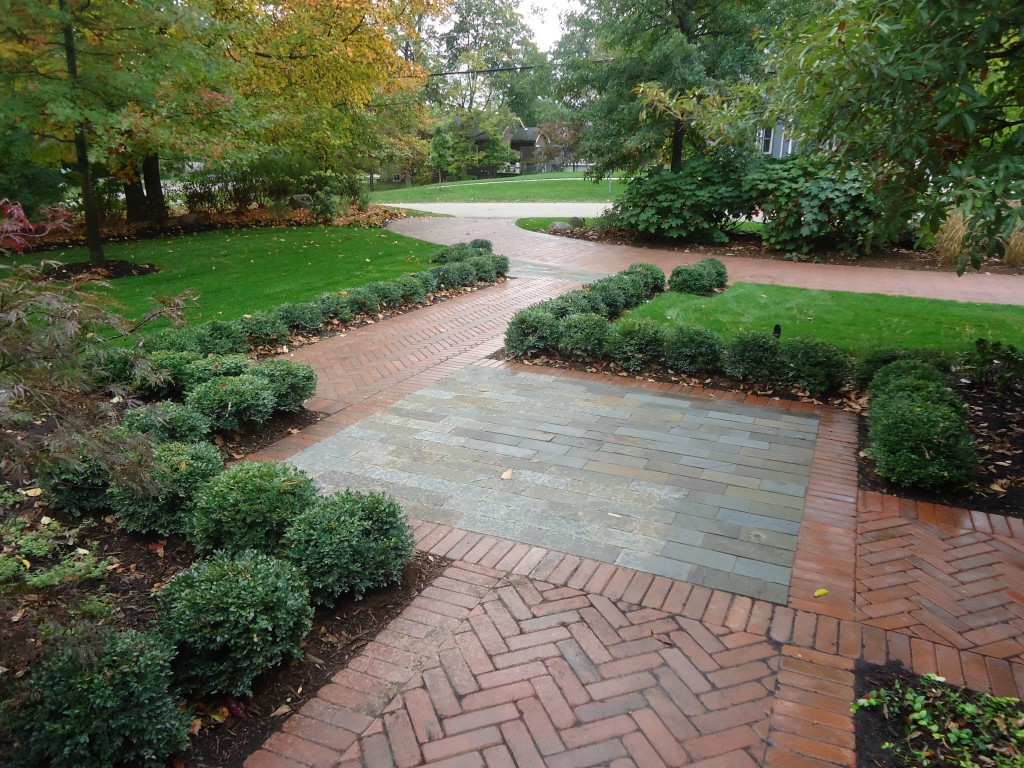 “They really were looking for an upgrade,” he explains. “They had an asphalt driveway they wanted to replace, and their two daughters play in the front quite a bit, and they wanted a seating area where they could watch them.”

Additionally, Murphy says more homeowners in the suburbs west of Chicago are putting in front patios, not just to have a comfortable place from which to watch their children, but also to greet their neighbors or sit outside and have coffee in the morning.

“I really wanted to use clay pavers because they hold their color,” the designer says. “I like the long, slender look of the Whitacre Greer pavers, which are installed in a herringbone pattern to keep with the long, straight lines of the home’s veneer.”

And, for the seating area, he designed what he calls a faux pergola, noting that it has no overhead cover. 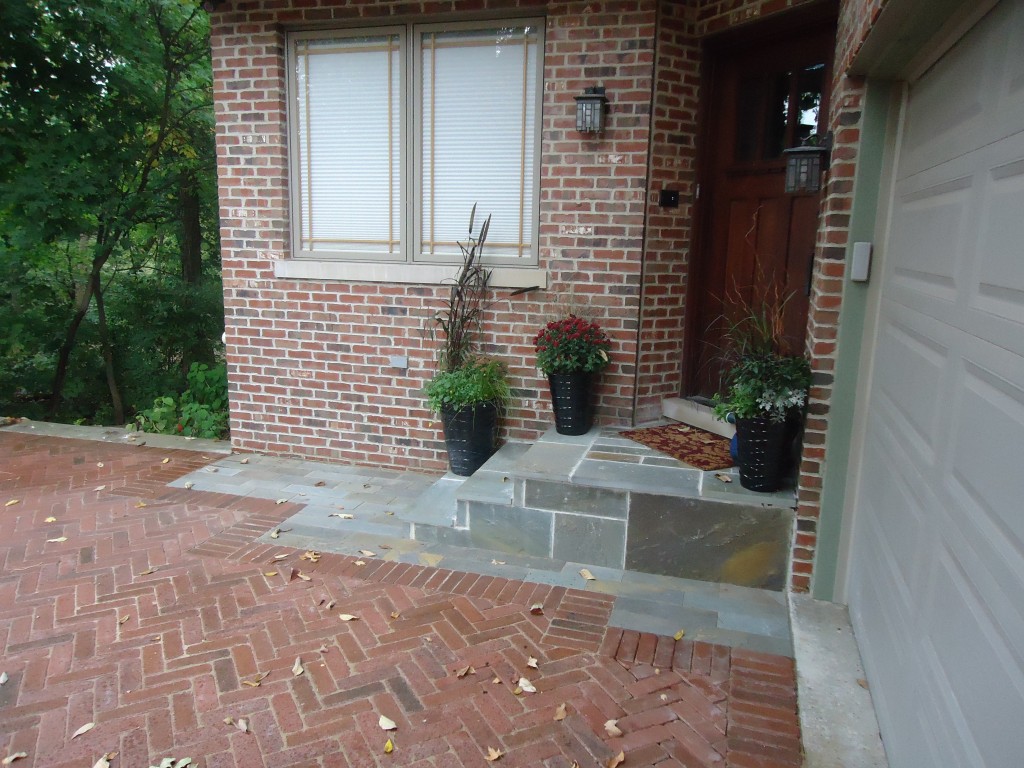 “Basically we did stone pillars around the seating area, and the posts for the pergola come out of those,” Murphy says. “One of the posts is actually part of the porch so it helps tie everything together. It just frames out the area and makes it a zone.”

The seating area is done in bluestone pavers, and the stone pillars are poured concrete faced with Eden stone with bluestone coping, as is the water feature adjacent to the pergola.

“It’s three-tiered and the upper tier spills into the two lower tiers,” he says. “The water feature was added at the last minute after the clients came to me and said they wanted a water feature for the sound of it.”

As with all of the paver work, the water feature is heated so it can run year-round.

It’s that mix of the bluestone with the red clay pavers that makes Murphy smile every time he drives past the site. 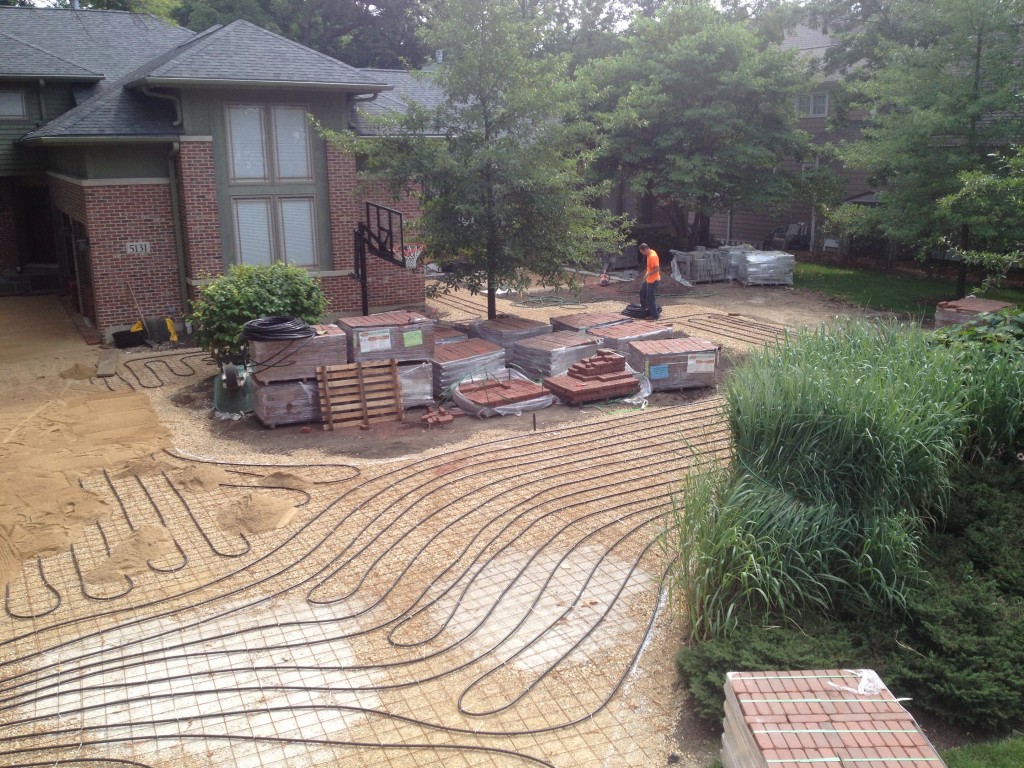 There was no question that a Bruss crew would do the installation of Murphy’s design, and he says it kept one of the company’s seven installation crews busy for the better part of three months to complete the job. 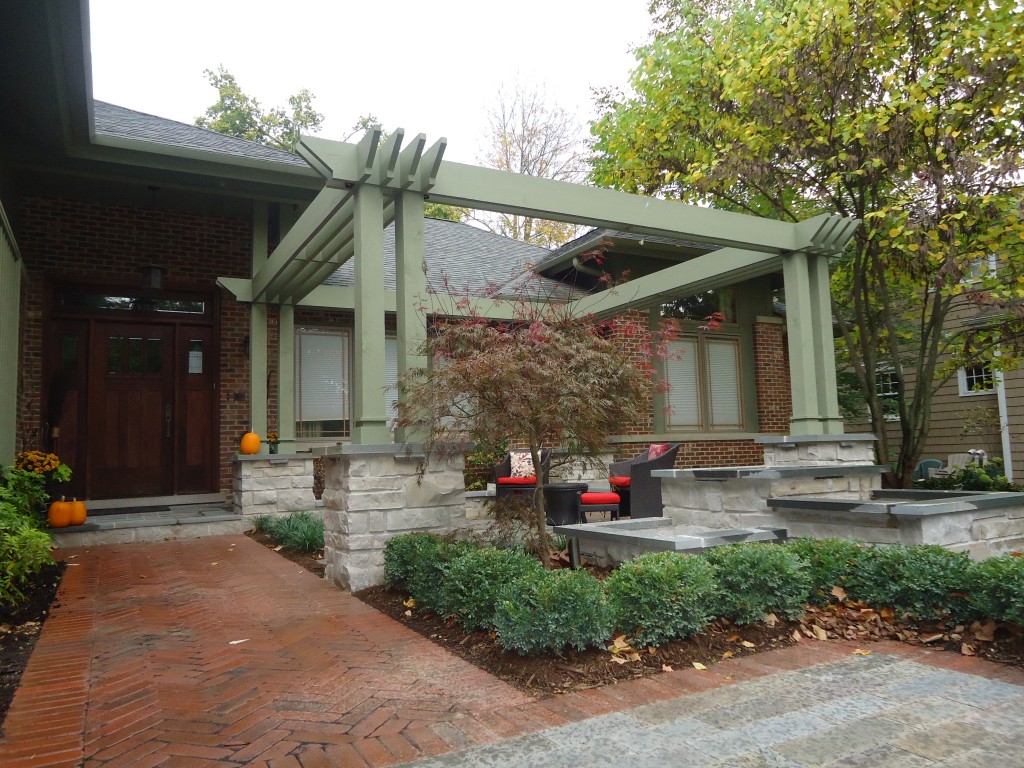 Getting the heating system laid out under the driveway was one of the biggest challenges for Murphy and the Bruss crew (he says he checked on the job at least twice a day throughout construction). Still another was coordinating the work of the subcontractors called in to do the stone masonry and the wood work.

A different challenge was working with the landscape that had matured in the years since Eric Bruss first worked on the property.

“There were a handful of trees that we worked around and a few shrubs,” Murphy says. “Along the north side of the property there are some mature trees and we had to work around the roots on them. Since then we’ve added more shrubs and perennials to get some color. The landscape is evolving and we’re always tweaking little things here and there.”

One of the landscape features Murphy is waiting on is the wisteria, which has been planted around the pergola. Although the project has won two big awards for its hardscape, he’s waiting to enter it in some other competitions — such as the Illinois Landscape Contractors Association — that are more concerned about the look of the plants.

All in all, the job has been a huge success. Although the $200,000+ project has become a sales tool for Murphy and his employer, from his perspective the best part is, “I was able to give them everything they wanted and be consistent with the style of the house. They’re happy with it, and that’s the most important thing, really.”

How happy? Well, Murphy is currently working up a plan to redo the backyard, too.