Story of a Landscape: European, American Elements Highlighted in Renovation

This nine-month project revamped an acre and half yard for family-friendly front and backyards.

Under most circumstances, an acre-and-a-half lot should be big enough for plenty of outdoor activities. In the case of a major, and prize-winning, renovation to the landscape of the Glad residence, it still proved to have a challenge — or two.

A cramped area in the rear of the home that held a pool, spa and patio was expanded by removing a fence and doing some additional grading. However, dealing with the crews involved in a major renovation/expansion of the home itself proved to be the greatest challenge designer Becca Bastyr and crews from the Shakopee, Minnesota-based Mom’s Design Build faced during the approximately nine-month project. 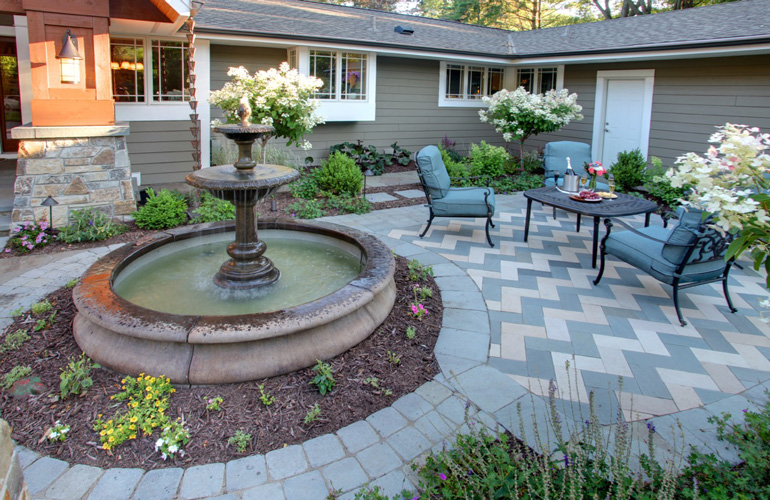 However, she says, “It’s really the people who make a big difference,” and, in this case, that extended to both the general contractor supervising the work on the home, with whom Mom’s had worked before, and the clients themselves.

“They called because of advertising we do in different magazines,” Bastyr says to explain how Mom’s was chosen for the work. “When I met the wife, I found out we had family members who knew each other. That helped generate a bond between us.”

The homeowner had lived in the house as a child, and it was her parents who installed the swimming pool in the 1980s. Later, her parents bought the property next door and used this home as a rental for several years.

When the couple moved back to Minnesota after marrying, they rented the home, ultimately buying it for their own use. As a mother with small children, she wanted to make the property more useful to her family.

“The plan was focal to the house,” says Bastyr. “They did have grass and the pool area, but it was strictly around the house.” 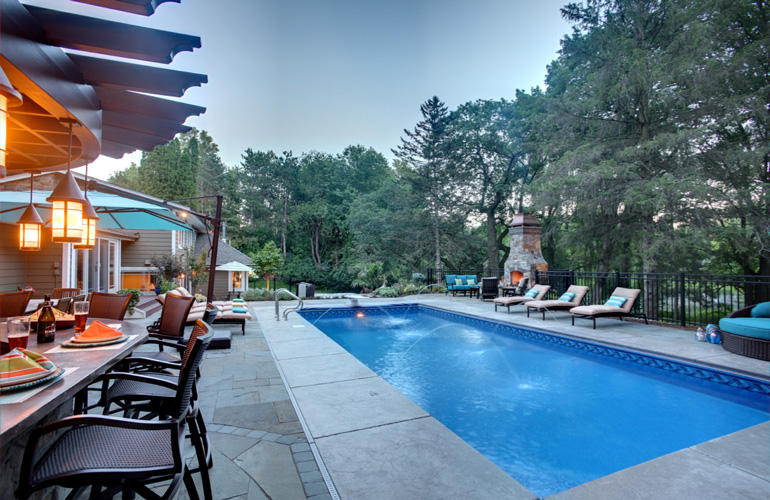 That meant doing work in both the front and backyards of the home. The front yard was renovated mainly for the homeowner and her mother to have coffee in the morning. Bastyr explains the client’s parents are Belgian, which influenced her approach to that part of the job.

“They veer toward the French, so it seemed appropriate to create a Parisian-type courtyard for coffee,” she says. “That’s also why I did a chevron pattern on the pavers for the patio. You often see that kind of detail in the stones and that adds some charm to it.”

After taking out some of the plantscape in front of the house, the Mom’s crew built new monuments to create a stronger front entry presence and installed both a seating area and a tiered fountain to further enhance the Parisian feel. 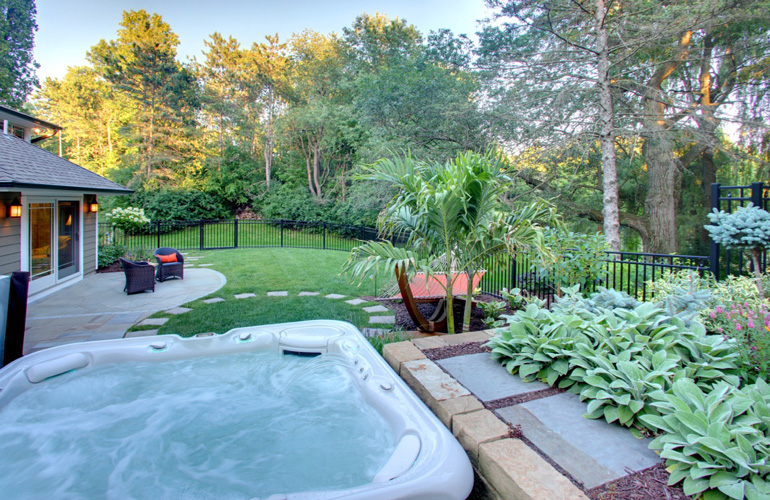 Bastyr says a different type of water – drainage – was also a concern because of the height of both the house and the driveway.

“Those were two set points, so we had to drain the courtyard in the courtyard,” she says. “We installed drain tile and catch basins where we could to pitch the patio correctly and still have a comfortable place to sit.”

The front yard portion of the project earned Bastyr and Mom’s a national CotY Award from the National Association of the Remodeling Industry for Landscape Design/Outdoor Living under $60,000, and is also the designer’s favorite piece of this challenging puzzle.

“European design is close to my heart,” she says. “I was excited to work with somebody who goes to Europe a lot and really wanted this look and understands it. With the fountain going and at dusk when the low-voltage lighting is turning on, it’s so charming.” 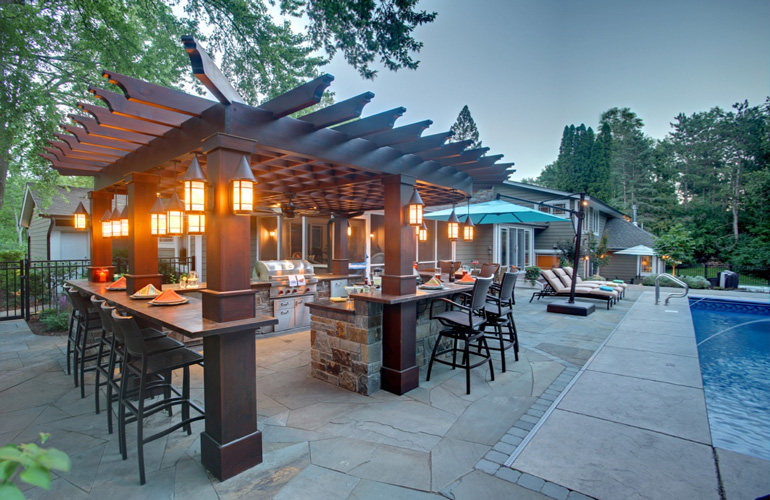 The backyard has more of an all-American feel to it, although it was not without problems to be solved. One early, major improvement was the removal of badly placed timber walls and a fence close to the pool that had cramped the entire space.

“It was pretty unusable,” says Bastyr of the backyard. “The only thing we kept was the pool. Everything else came down. The pool got a new liner, it got an auto-cover, it got jets and new lights. The hole in the ground stayed, but everything else was new.”

Bastyr explains that she increased the patio space by adding retaining walls around the pool area to deal with a slight grade that fell away to a lower area off the master bedroom and a living area of the split-level home.

“By doing that, we were able to add space around the pool and for a fireplace in the back corner,” she says. “None of that would have been possible without the retaining walls. There were three of them that maxed out at three feet in height, but it was enough to make a giant difference for the patio.” 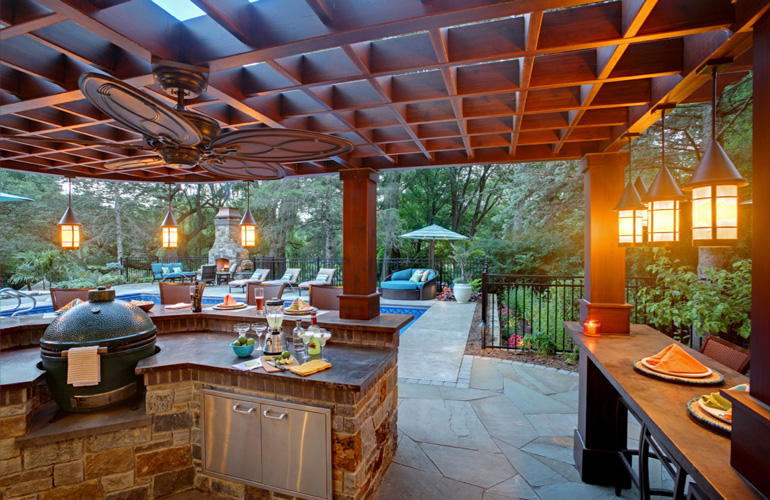 The retaining walls also were used to create a specific niche for the hot tub that puts it at the same level as the pool. And, the lower level includes a play area for the children and pets that includes grass, is gated and reached by a handful of steppers.

The retaining walls are built from an 8-inch thick natural stone called “Buckskin,” that comes in varying lengths and has been quite successful for Mom’s. The pool’s three-foot surround is a textured concrete, and the patio itself is a mix of patterned and irregular bluestone from Pennsylvania that’s been sand set.

Bastyr says the use of the sand-set bluestone is partly for drainage, although the project does have a strip drain running along the long side of the pool between it and the house. 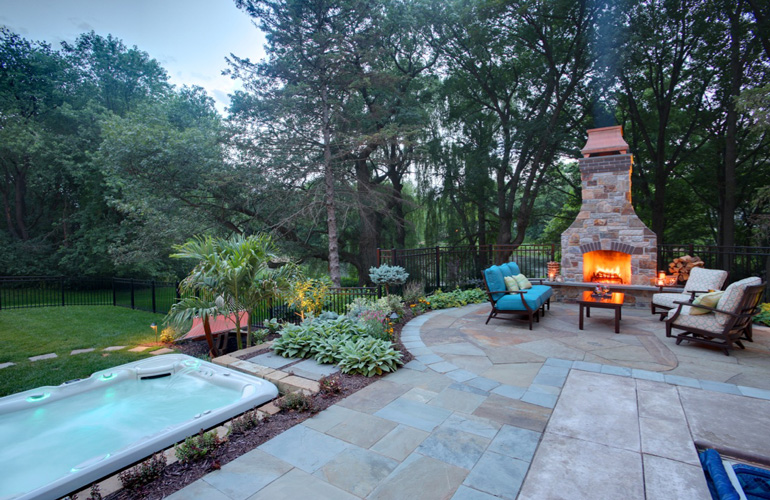 The designer says a fun part of this project was assembling the project’s outdoor kitchen. With her parents next door, siblings in the neighborhood and a large circle of friends, entertaining space was at a premium. The answer: a kitchen island that seats a dozen.

“The kitchen has a giant island and then the main cooking area where we incorporated a Wolf outdoor gas grill and an extra-large cooker from The Big Green Egg, Inc.,” Bastyr says. “They’re built into the masonry and then we have bar seating around the island.”

The client requested a pergola over the kitchen both to provide shade and support a ceiling fan and pendent lights. The pergola was built off-site, brought to the property and then assembled by a subcontractor.

“They came out and took measurements of where the footings were and how it laid out and then took that back to the shop,” she explains. “It arrived in pieces with the top in one giant piece and each column in two pieces. It took two or three days to assemble the whole thing, but it minimized the impact on the construction site.”

The patio also features a heat source with seating by way of a fireplace that – although at the back of the patio – is centered on the home’s great room.

“It was very important for them to have a view out of that room, a significant view,” she says. “I centered the fireplace on the line-of-sight out of the big sliding doors. Even if they didn’t want to be outside, they could have a fire going in the fireplace and enjoy it from inside.”

Along with space for an outdoor couch and chairs, the fireplace has seat-wall-height wing walls. The fireplace itself is a 4” veneer finish in a combination of an Indian Creek fieldstone and a variety of bluestone. At the clients’ request, Mom’s also installed the same veneer on the exterior chimney of the indoor fireplace. 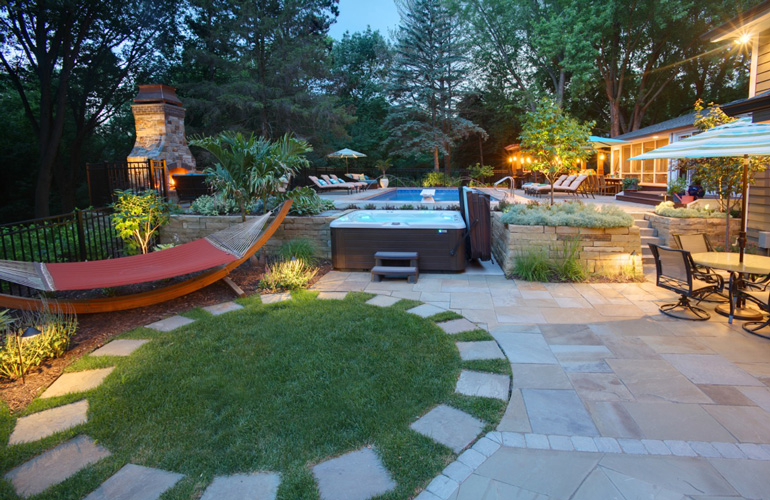 Despite the plaudits the project was earned – it was also recognized by the Minnesota Nursery and Landscape Association — Bastyr says she’s most proud of the job’s design.

“The client was really sweet, so it was great working with her through the design process,” she says. “And, I’m always excited when people love my ideas and want to see them come to fruition.”

As for those crews working on the remodel/addition to the home itself while the landscaping was being done, Bastyr says the biggest challenge really was parking. At times, the Mom’s crew could include masons, a gas technician, electricians and a landscape crew, as well as the pool and carpenter subs, and it wasn’t unusual for another dozen or more people to be working inside the home.

“We were fighting for driveway space,” she says. “We have big trucks and we could minimize our vehicle traffic, but there might be a dozen vehicles in the driveway delivering materials and people.”

She adds that some of this occurred despite the fact that work on the fireplace and kitchen began in late November and was mostly completed in early February by working under heated tents. The rest of the project started in April, after the frost had come out of the ground, and was completed in July 2015.

Bastyr gives credit to the crews and subs for making things flow as smoothly as they did.

As for what she learned from this makeover — along with finding that people really can make the difference on the success of a project — Bastyr says for her it’s important to keep things simple.

“This doesn’t look simple, until you look at it in black-and-white,” she observes. “I can sometimes do a little over-designing. It was important for me to take a step back on this one and look at things with a more-simple mind frame. Not only can less be more, but in the end it can be more calming.”