Story Of A Landscape: Outdoor Kitchen Installation With Lake Views

Some design/install relationships with clients can seem a bit forced, perhaps unhappy. Others are strictly copacetic.

The latter was certainly the case when Suzanne and Jason Brosche, the husband/wife owners of Dahlonega, Georgia-based Art of Stone Gardening, stopped in to visit a potential client. Suzanne Brosche says the man, whom the couple knew through their interest in cycling, wanted an outdoor kitchen.

Unfortunately for the client, she says, he had talked with several other landscape contractors and designers but none of them had come up with ideas he liked.

“We started talking and trying to figure out what he wanted, and we said, ‘How about this?’” she explains. “He said, ‘That’s exactly what I want,’ and that’s how it worked out. It was just one of those things where we hit on exactly what he wanted.”

Of course, not all outdoor kitchens are the same, nor are all sites nor all clients’ needs. In this case, the clients’ house was brick, with a slab in the back. Not only did they want any work to meld with the existing look of the home, but they wanted some additional seating and a fire pit, as well. 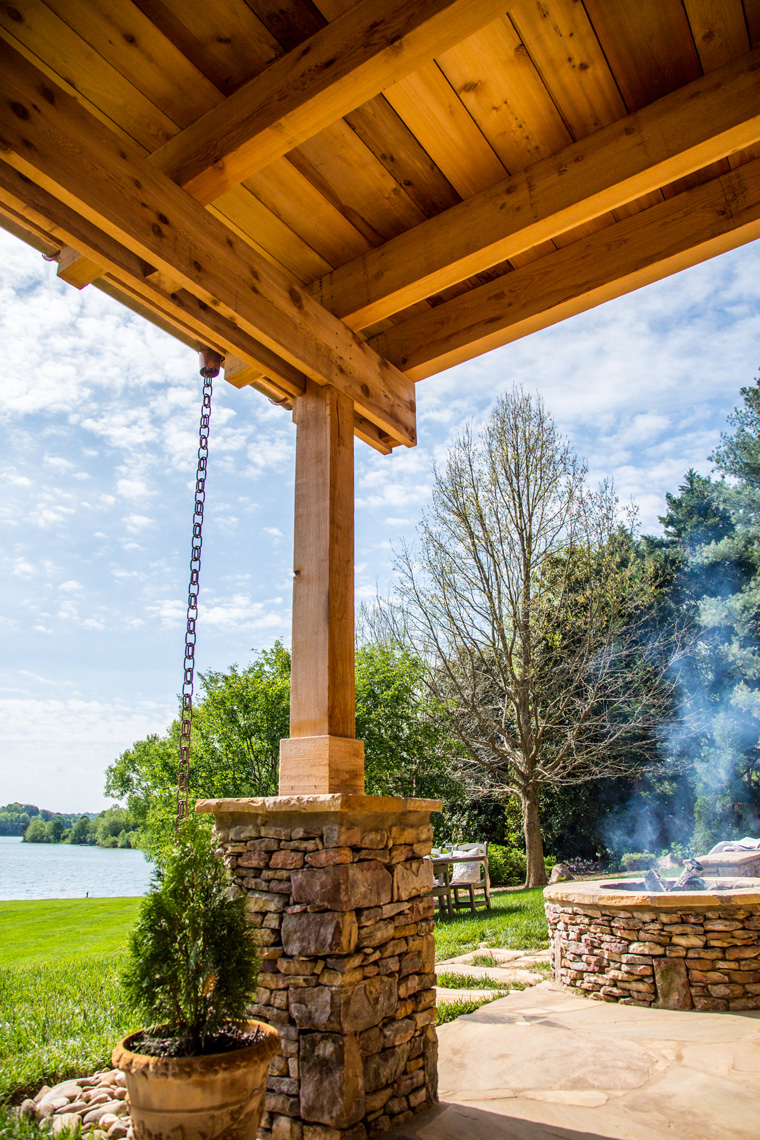 “They didn’t want to block the view of the lake,” Suzanne Brosche says. “That was the hardest part — coming up with something that would be integrated into their house without blocking the view.”

The other issue the project faced: a backyard septic system.

“That made it more of a challenge,” says Brosche. 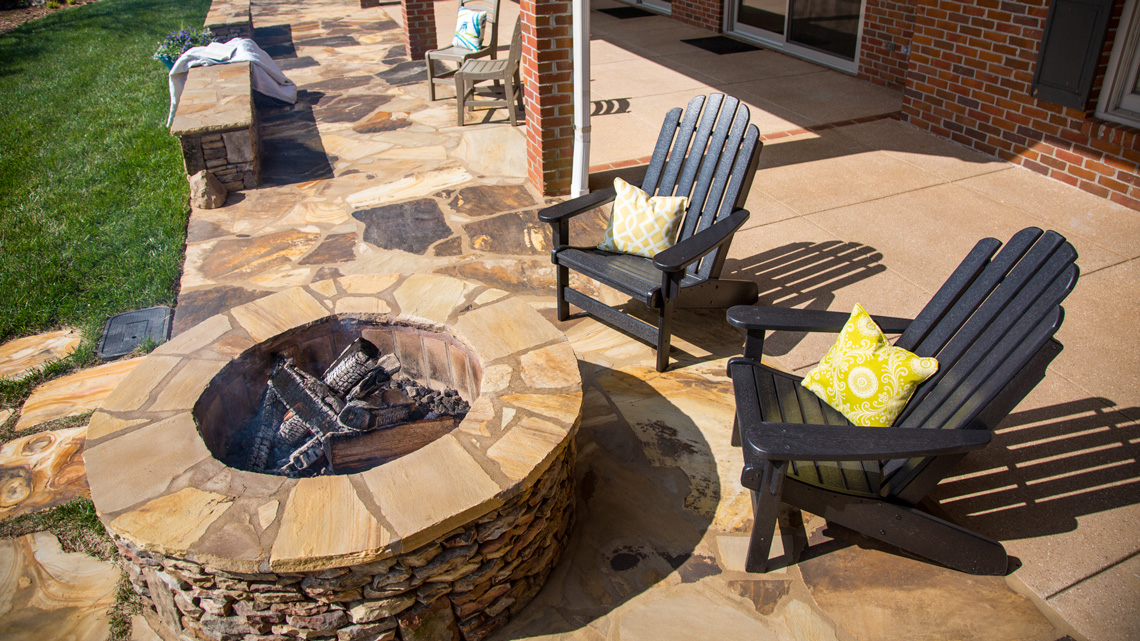 Her solution to the clients’ problem could hardly have been simpler. It began by removing an uncovered concrete slab next to the home’s covered patio on which a portable grill had been placed, and replacing it with giant flagstones set over a concrete base.

“We then covered that area by putting in a cedar arbor,” she says. “That made a space that was dry, so he could put his TV in there.” 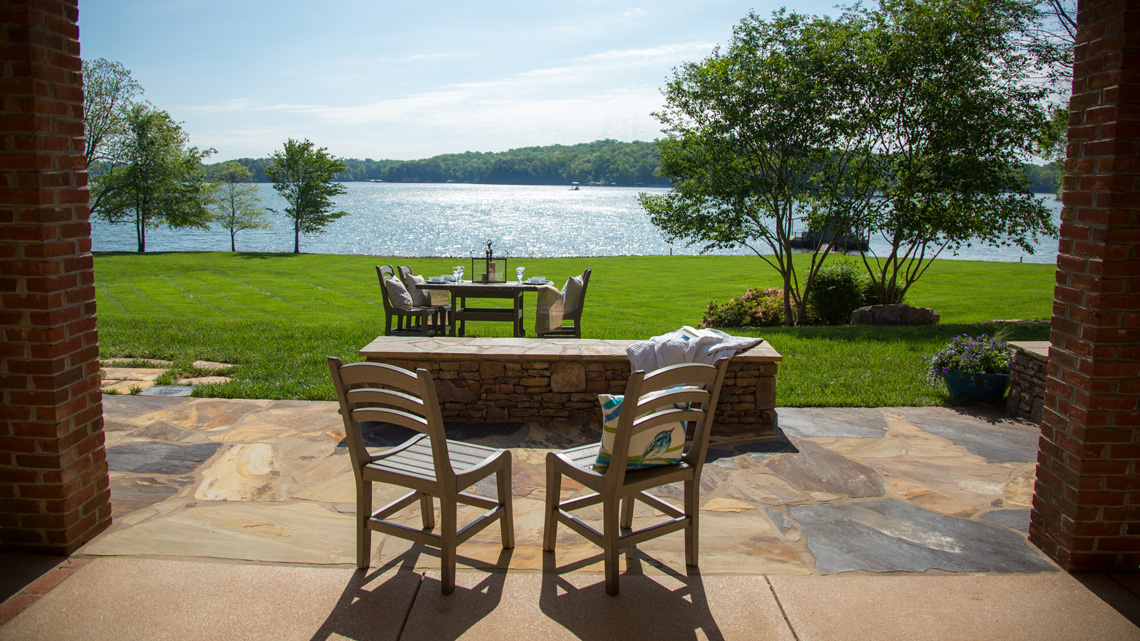 The kitchen itself includes a build-in grill and a Green Egg smoker, as well as a shelf area for serving. The project’s only lighting involved illuminating the kitchen. Brosche notes there’s also a ceiling fan because of the smoker.

The company then squared off the outer edge of the concrete pad under the client’s upstairs deck and expanded the seating area with a flagstone apron whose width was determined by the presence of the septic field. 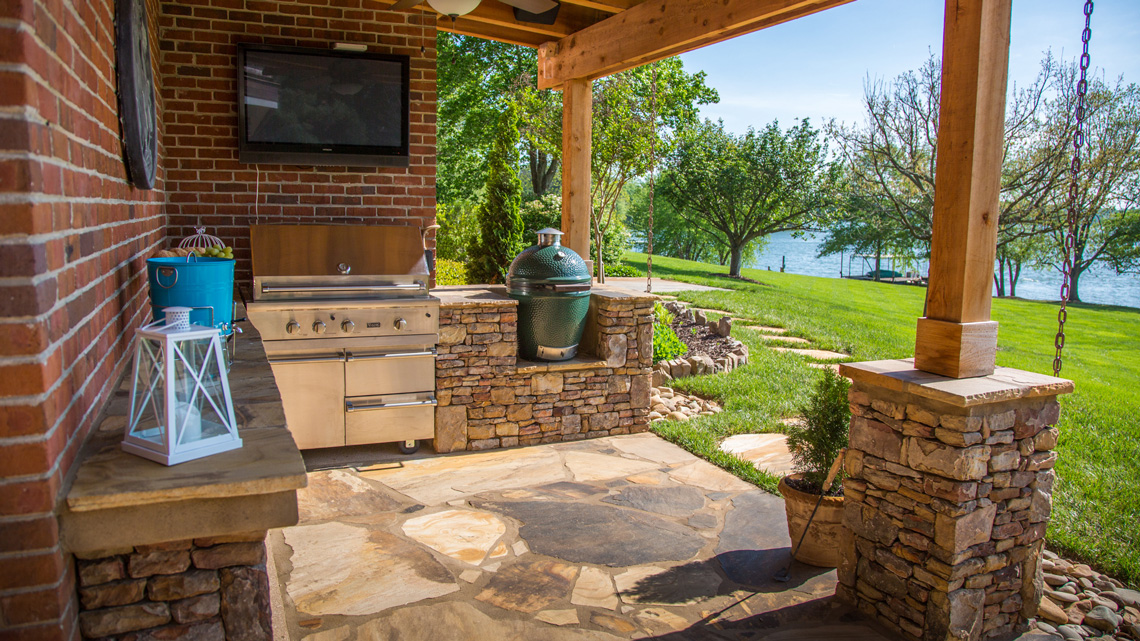 Brosche explains that the flagstones range from three to four inches thick. The flagstone apron is the site of the new fire pit, and two seating walls build from the same Tennessee fieldstone used in the kitchen. The fire pit has a gas starter.

“We really just built on to what he already had,” she says. “We did put in a walkway going off to the side from the same flagstones, and we had to replace some of the sod — just to touch it up.” 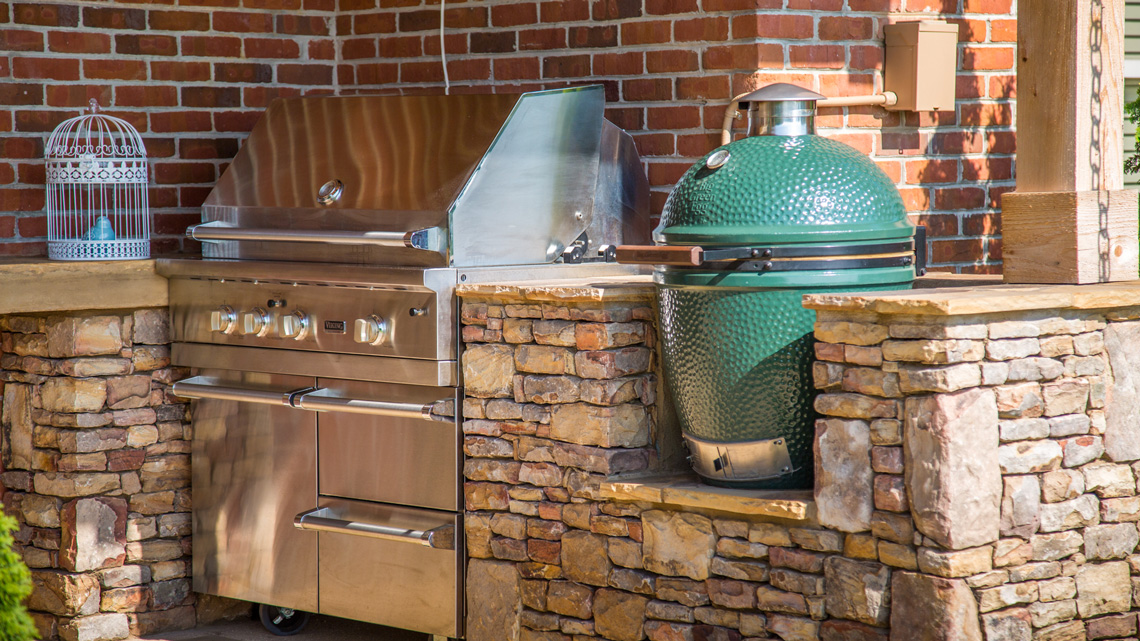 Some of that touch-up was due to additional drainage the project required, including off the roof of the cedar arbor.

“We had to get around the septic to put in the drain lines,” Brosche says. “It drains further out in the yard. And, we put in rain chains, which are a pretty way of putting in drainage from the roof gutters. They go into boxes with round river stone. It’s decorative, but useful as well.”

The septic field notwithstanding, Brosche says really the biggest challenge the project faced was not damaging the clients’ lawn. 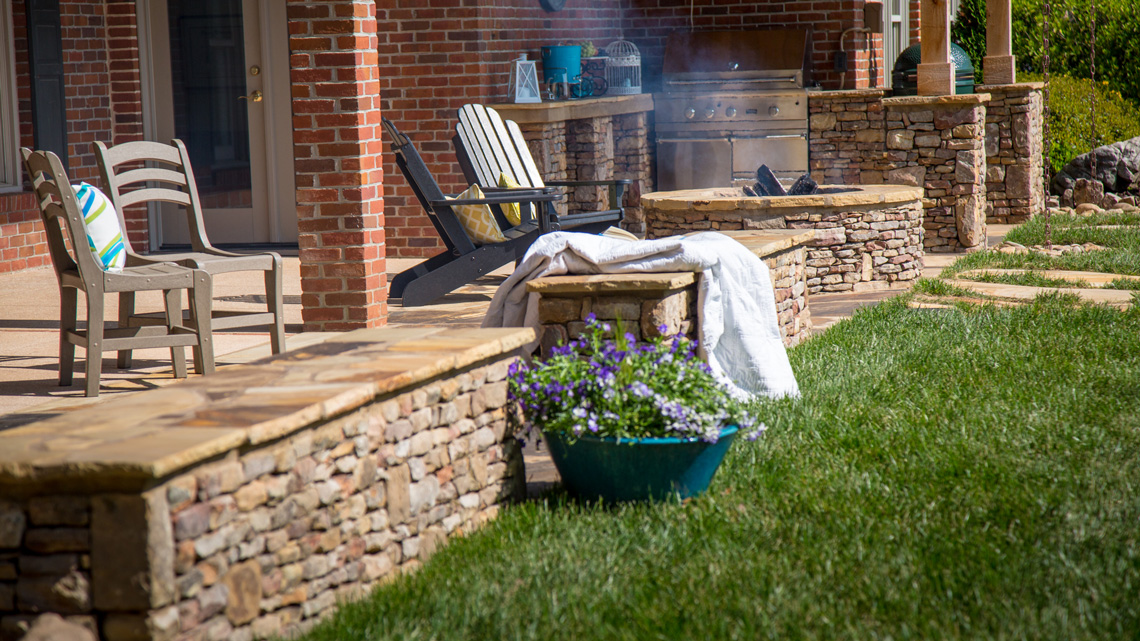 “That, and getting him exactly what he wanted,” she says. “He would look at it and change a few things here and there, but it was actually a fun project and he was a joy to work with.”

If that isn’t enough to define the project as a success, it also won an award of distinction from the Georgia Urban Ag Council for residential design/build/install projects of less than $50,000. However, Brosche is also thrilled with the way it’s finished, and particularly pleased with the cedar arbor.

“I just like the little niche with the roof and the stone behind it,” she says. “The look is just right.” 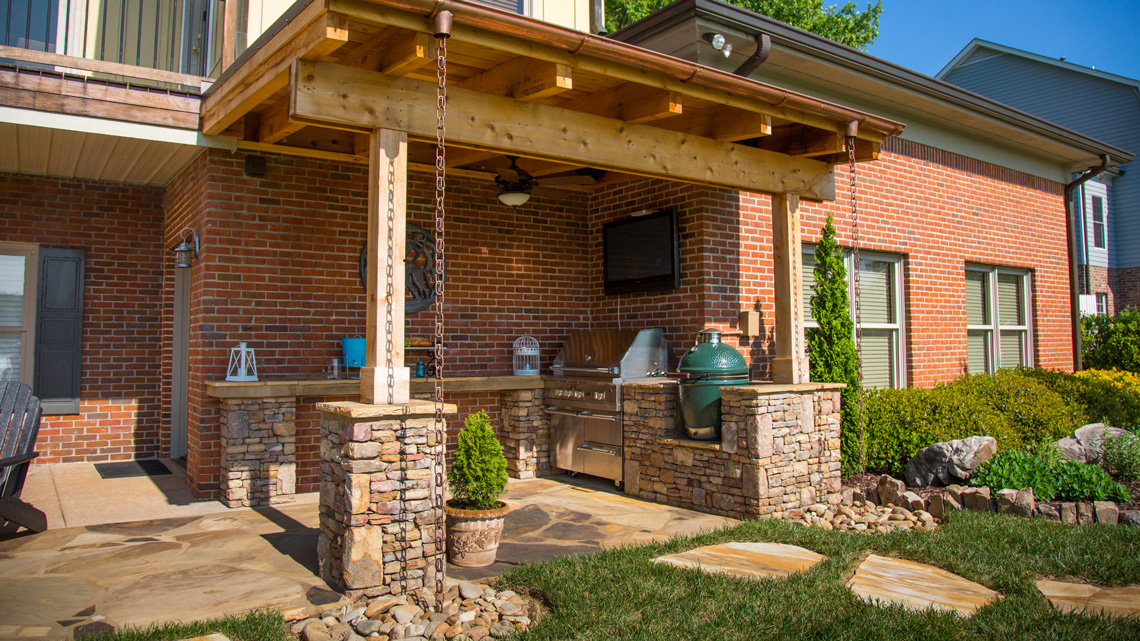 And, as for the client, “He says he never used to cook, but now he cooks most of the time,” she adds. “His wife is very happy about that.”

As for what she learned from this project, Brosche says it’s all about logistics, especially since the company had as many as five people on the site at time, first with a stone crew and then a landscape crew.

“The logistics are always difficult, especially trying to get into a place and not damage what’s there while making it look better by the time you leave,” she concludes. “Fortunately, this was a fun project where we were working with people we like in a beautiful setting.”