Story Of A Landscape: Dual Prize-Winning Project Built On A Foundation Of Drainage

Not only does the renovation of this property match the architecture of the home, the foundation of the project is rooted in the extensive drainage and grading.

Sometimes, what the client wants and what the landscape architect addresses are two vastly different things. A good example is a residential project undertaken by Atlanta-based Floralis Garden Design.

The property buyers were looking to beat back the overgrown plant life and create a place for their children to play. However, for landscape architect Lucinda Bray, a big part of the job turned out to be about drainage. 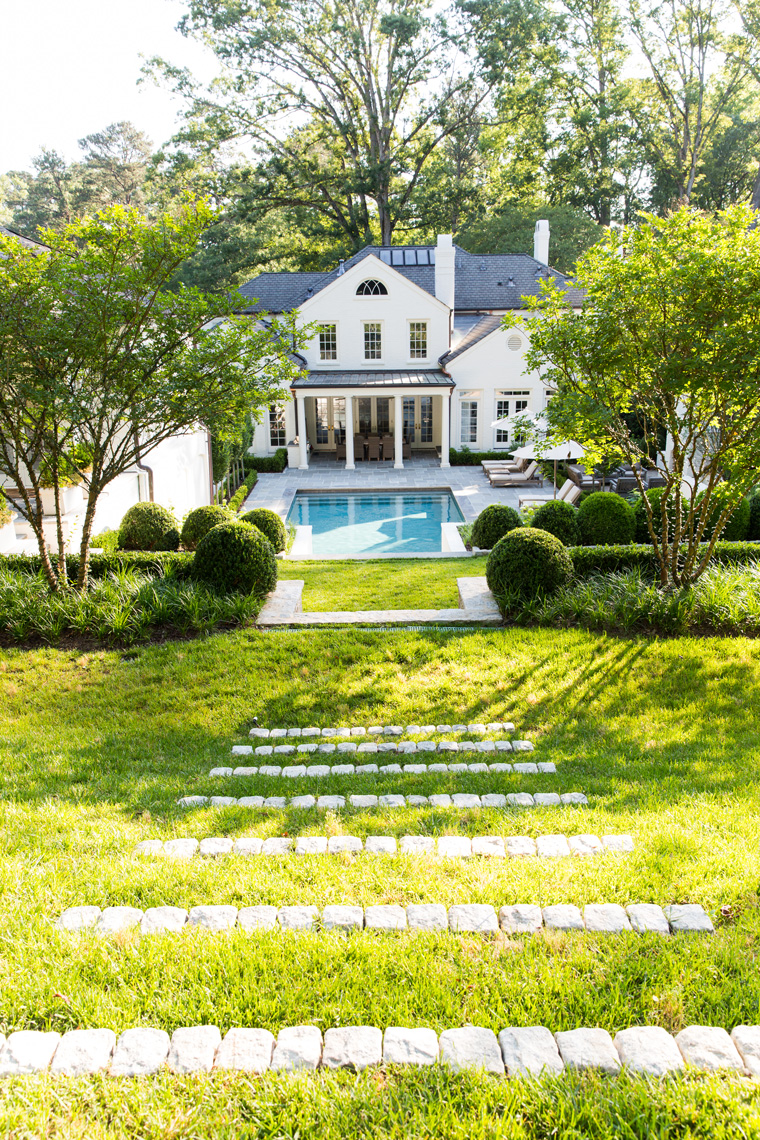 Bray explains that the homeowners were referred to Floralis by Michael Ladisic of Ladisic Fine Homes, Inc., who was doing an architectural renovation of the home, and the property — a shoebox-shaped lot of slightly more than eight-tenths of an acre — was purchased with both renovations in mind.

The clients had some very specific desires, as well. Along with play space for their children, they wanted a pool and some outdoor entertaining spaces. And, they wanted the color scheme of the landscape to be predominantly green and white.

“Many of our projects tend to be on the green-and-white line,” Bray says, “People are looking for an evergreen basis to their landscape, something that’s a little more consistent year-round. When we do color, we like to use it in dedicated garden areas or containers for seasonal color.” 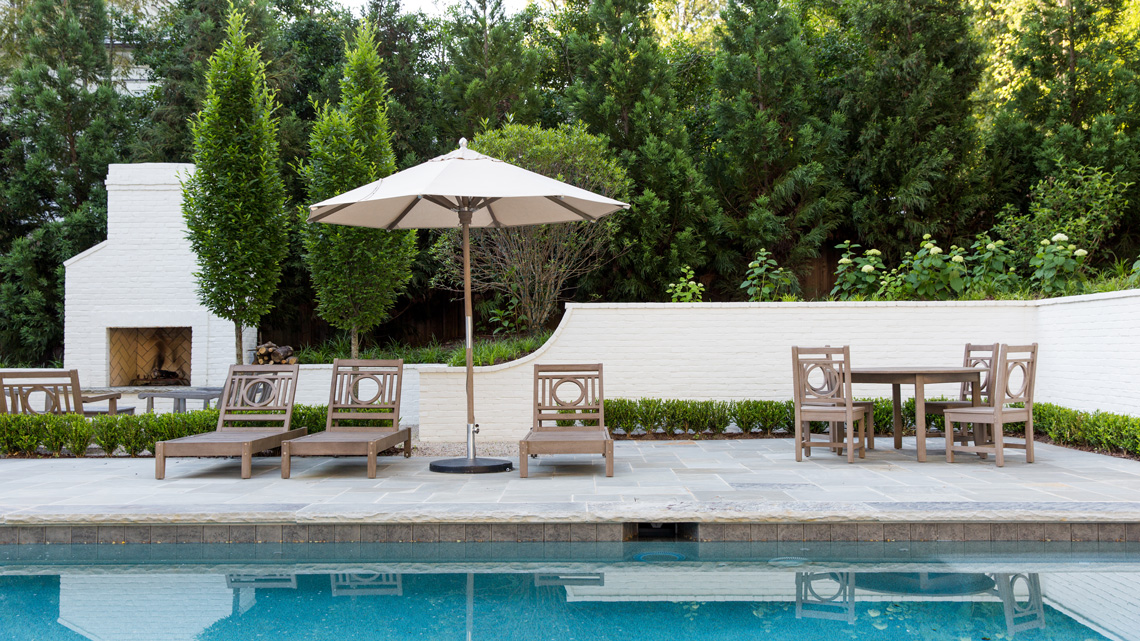 Bray and Floralis took on the landscaping for the entire property. She says work on the front and side of the house were tied primarily to architectural changes made by Ladisic.

“They changed the front door and the area directly surrounding it,” she says. “We rebuilt the front steps and did a new front walkway. The front foundation plantings were also outdated and overgrown and needed to match the rest of the project.”

The rear of the property wasn’t nearly as simple. Along with overgrown plant material, the landscape architect found a mix of grade changes, some low walls, and an abandoned pond. The rear terrace was in disrepair and the existing outdoor spaces suffered from poor transitions, as well. 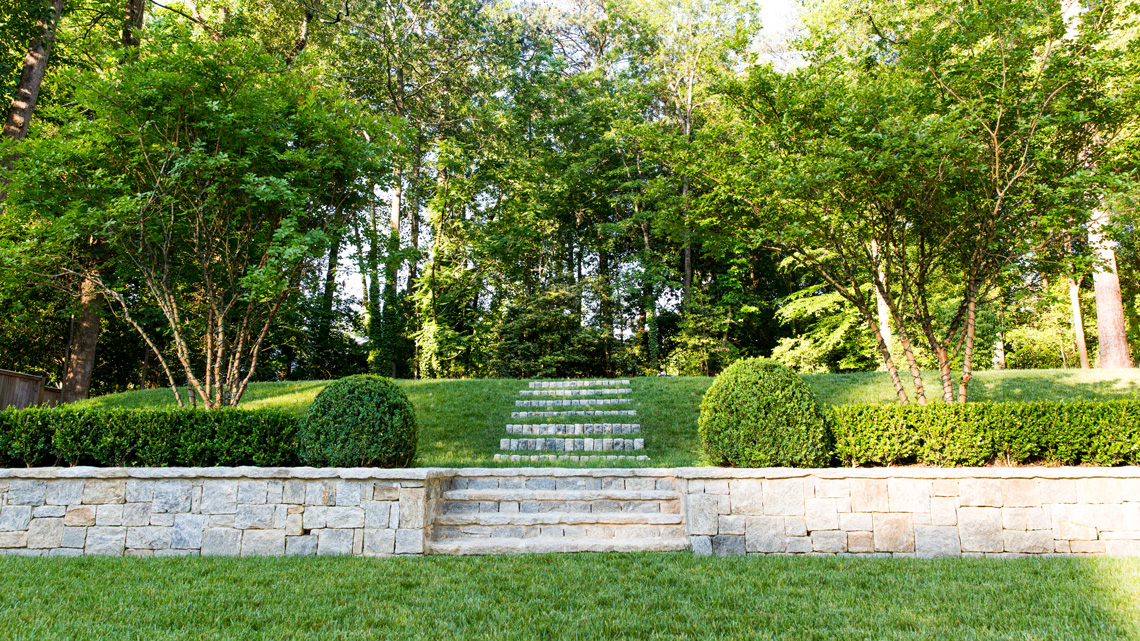 Floralis’ design removed the rear landscape terrace, steps and pond. The area was also graded to create an extended space leading from the house. Not only did that provide room for a new pool, but also a large bluestone pool terrace, which was continued into the covered patio next to the house with a built-in grill and dining area.

A separate seating area done in pea gravel with a painted brick fireplace provides an additional entertaining area. The upper end of the property, which offers a flat, grassy play area for the children, is reached via stone steppers.

The plant palette for the project was particularly important given the clients’ desire for that green-and-white look. Not only did Bray work to pair architectural elements with landscape materials, but simplicity was key. 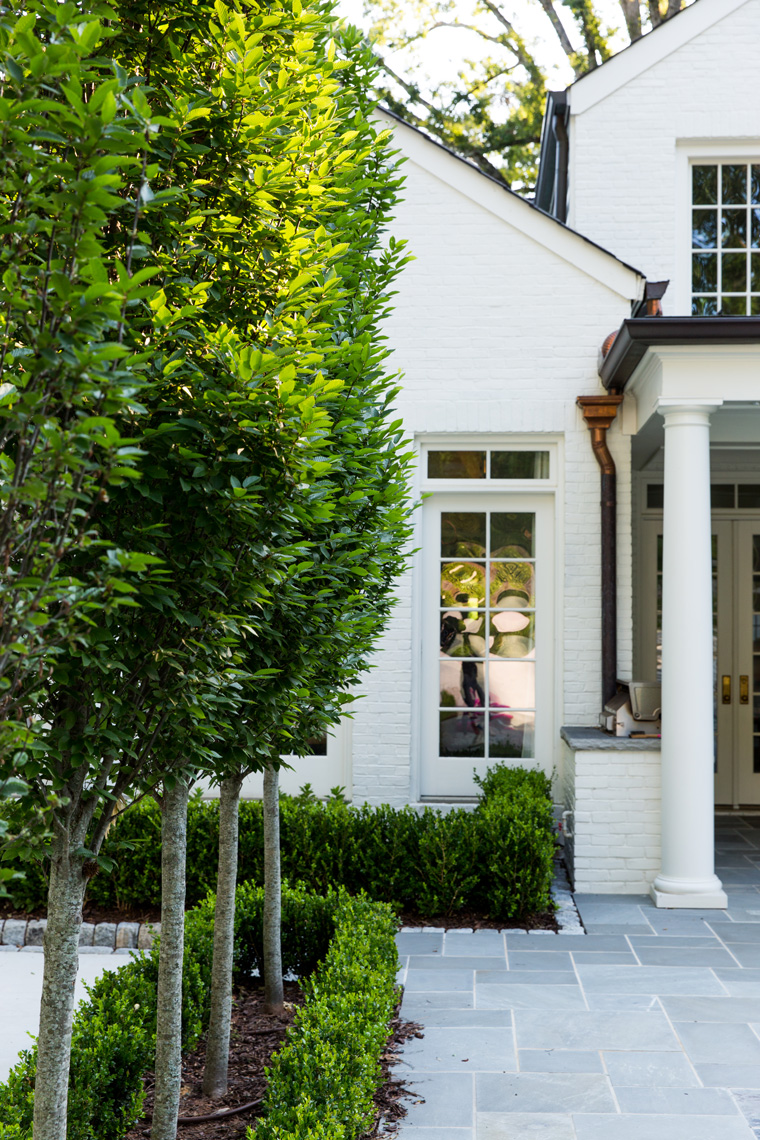 She explains that evergreen landscape components were grouped to frame and focus the architecture while providing balance to the overall look. Near the terrace, lines of hornbeams were also paired with low boxwood hedges to soften the hardscape and provide a sense of separation between outdoor spaces.

It’s the softscape that Bray says is her favorite part of the project.

“No matter what time of year you view it, it has a level of structure and stability,” she says. “Even in the dead of winter is reads so green and bright, and it really grounds the architecture of the house.” 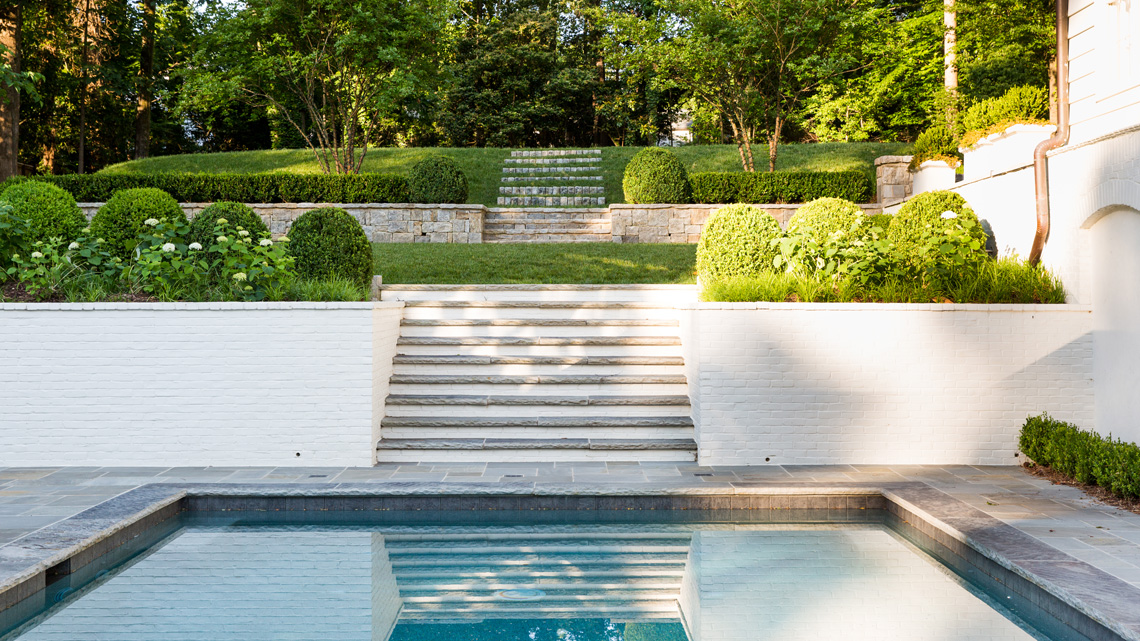 Not that there weren’t a lot of challenges in getting the job done. One was an ill-timed rainstorm that ended up filling the swimming pool with mud from the bare hillside. A much larger one was managing the stormwater runoff for the whole property.

All of them pipe underground to a holding tank beneath the pea gravel fireplace terrace.

And, all this had to be done while keeping the logistics of the project in mind. Bray says that was the most-challenging aspect of the project, and she describes construction as being phased, with the architectural renovations being completed first, followed by the completion of the rear grading and upper lawn terraces.

“The last steps were the pool and lower wall being put in place,” she says. “This cut off all access to the rear of the property.” 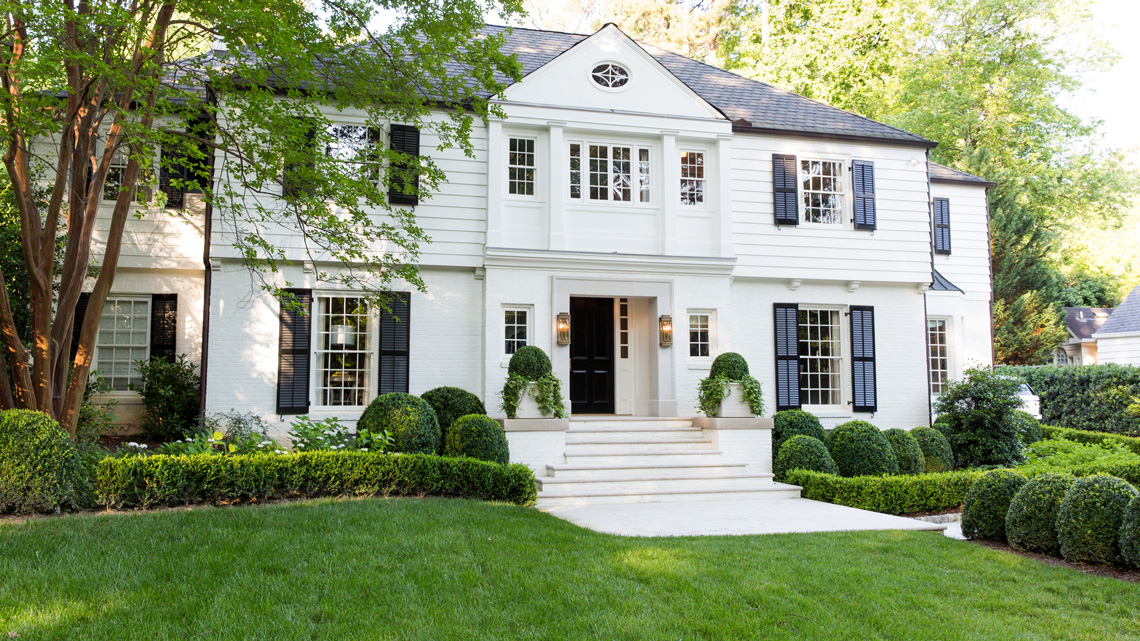 Floralis utilized a general landscape contractor, Michael Jackson Landscape, to handle the grading, larger tree installation and lawn areas, while Ladisic folded some of the masonry work into his scope of the project, including the pool deck and the retaining walls.

“We also had an outside contractor, Irrigation Atlanta, come in to address the irrigation,” says Bray. “Otherwise, the landscape plantings, including the shrubs and hedges, were done in-house.”

Initial work on the redesign began in January 2015, and construction began that April with tree removals and the initial clearing and grading. However, because the project included the architectural renovation, Bray notes that construction wasn’t completed until July 2016.

The project won recognition from both the National Association of Landscape Professionals for projects in the $100,000-$500,000 range, and from the Georgia Urban Ag Council for projects of more than $150,000. However, Bray says she’s most proud of her relationship with the clients. 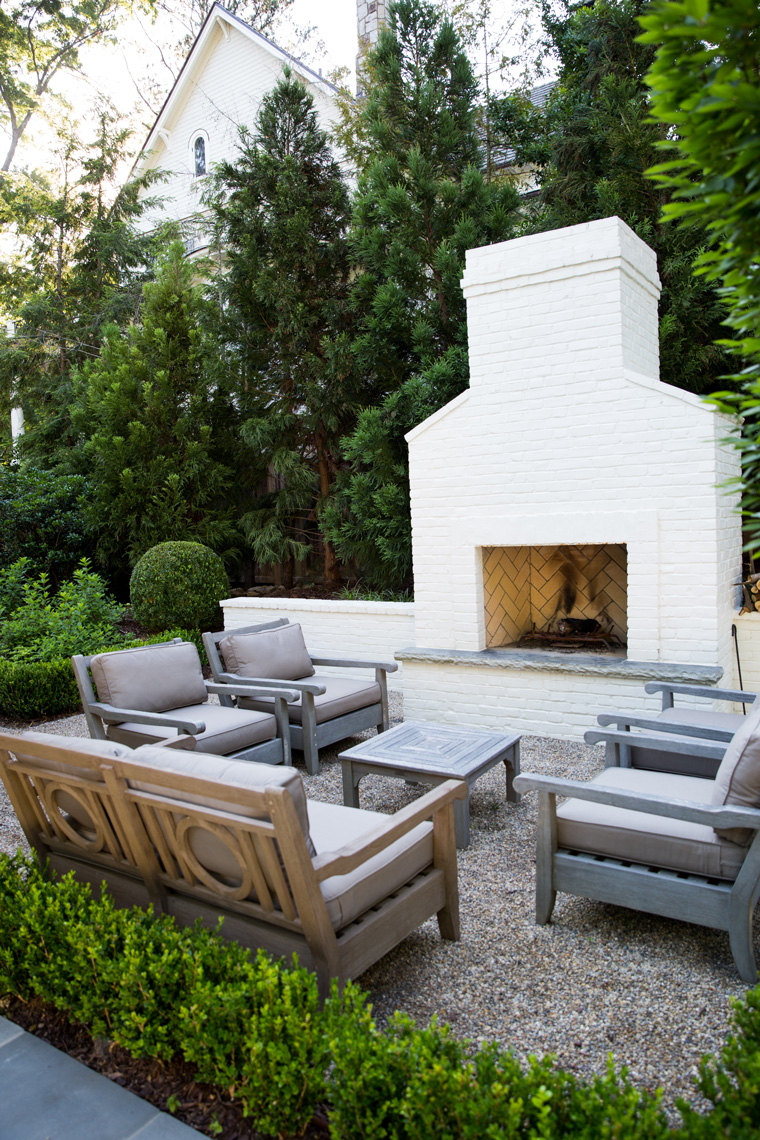 “Certainly, there are some bumps along the way with any project,” she says. “I think it’s how you deal with them and get past them to make sure that things are done property and to a quality standpoint. At the end of the project, if you have a great relationship, it speaks volumes on how you’ve handled yourself during construction.”

She has plenty of evidence to back up that success. While a job transfer took the owners out of the Atlanta area less than a year after the project was completed, Floralis has developed a new relationship with the people who bought the property. And, the company is also landscaping former owners’ new home — in Ohio.

While enjoying the plaudits from the project, Bray says from the perspective of learning something, this one was still all about the drainage.

“You plan for your standard rain event, and you expect that when it rains the installed drainage will function as intended,” she concludes. “But, when you’re designing drainage, you have to think about that one rain you don’t expect, the one that will drop a few inches of rain in an hour; you have to think about what’s going to happen then.

“It opens your eyes a bit too, to development in the city,” Bray adds. “What happens when the neighbors develop their property? Every time someone builds something, it changes the way the water runs, so we had to make sure we can accommodate it or have the future capacity to do so.”

Tags: National Association of Landscape ProfessionalsStory of a Landscape