Story of a Landscape: Monument Redo Becomes a Piece of Art

The final monument design features glass pavers set in sand bordered by the same granite that was used for the monument steps.

Redesigning and renovating a 190- by 67-foot lot shouldn’t take all that long, especially when the area already had a built footprint.

For Jackie Ansara, owner of Jackie Ansara Landscape Design, work on the monument to Edward D. Libbey at Woodlawn Cemetery and Arboretum in Toledo, Ohio, took more than two years, but it wasn’t because of the boxwoods and white sunpatiens.

Instead, Ansara’s desire to add a glass feature to the site commemorating the man whose industrial vision turned Toledo into “The Glass City” required research, planning and funding well beyond a typical backyard.

Her own vision for the space netted Ansara an honor award from the Ohio Landscape Association in the category of specialty gardens. But, as she says, “Just because it looks simple doesn’t mean it was easy or without thought.” 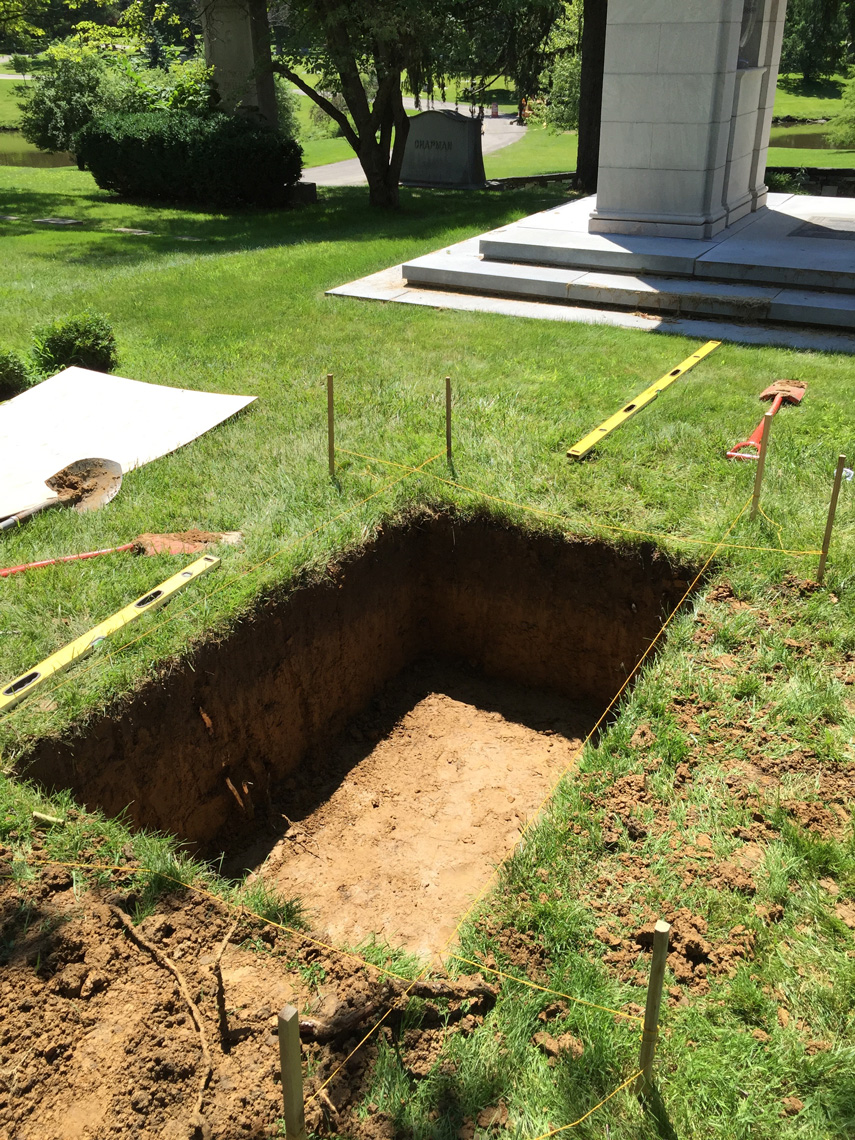 Although Ansara created the design and was responsible for the installation of both the landscape and the glass feature, she began work on the project while still employed as a designer at Nil Gallagher, Inc.

“The woman who owns that company sat on the board at Woodlawn Cemetery, which had fallen into some disrepair,” Ansara explains. “It’s privately run by a board of directors, and they were trying to return it to the full meaning of being a rural cemetery. To do that, they wanted to start with a monument they could renovate to show other families what could be done if they’d just spend a little money.”

Certainly, the Libbey name in the community made Edward Libbey’s monument a natural subject for a makeover. Libbey, who as a young man inherited New England Glass Co., later moved his operation to Toledo where he founded three separate glass companies. One of them, Libbey-Owens-Ford Co., was the first flat glass manufacturer for the automotive industry.

Libbey also founded and helped fund the Toledo Museum of Art and his trust is still active and helped pay for the work on his monument. 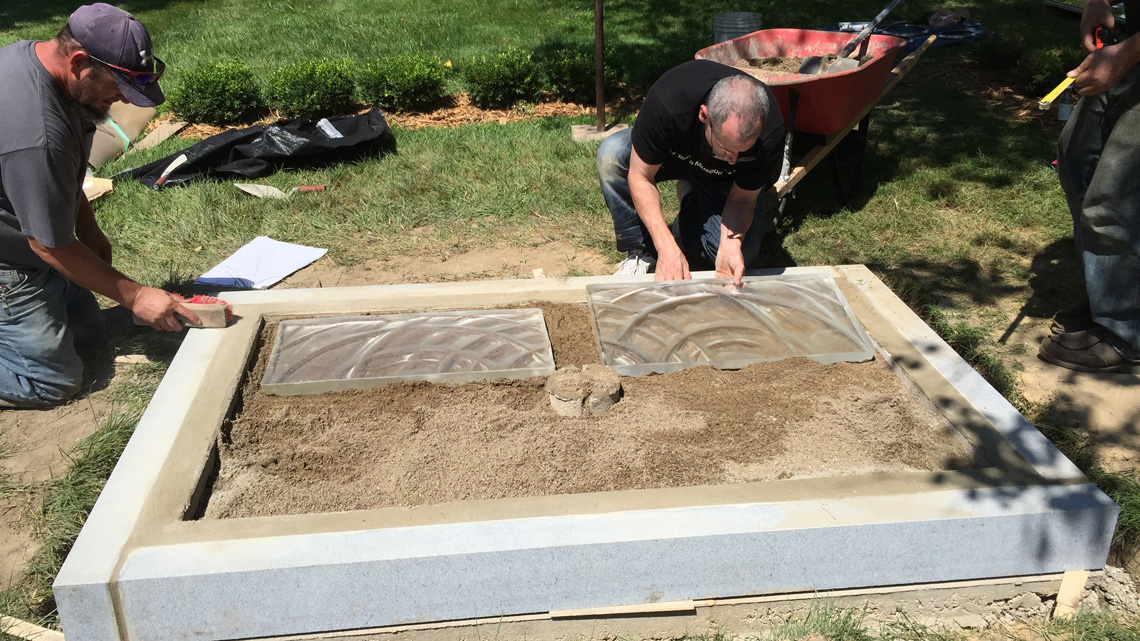 Ansara says Libbey’s legacy was only one area that she began researching after getting the design assignment.

“I did a lot of research on what it is to be a rural cemetery,” she says. “Rural cemeteries grew out of churchyards. As the urban cemeteries became crowded they moved out into the country. The people who designed them were heavily influenced by Frederick Law Olmsted.”

That meant incorporating high canopies and low plantings along meandering drives. More than a century ago, the rural cemeteries became popular places for people to picnic, with the monuments serving as the artwork and décor.

“The first time I walked around the Libbey monument, I found a lot of very old and very badly maintained plantings that were obscuring this beautiful monument,” says Ansara. “There was also a concrete stepping stone – the sort of thing you can buy at a big box store. I remember stepping on it and thinking, ‘What if this were glass?’ That was my epiphany.”

As Ansara worked up her landscape design, which she says had to consider not only initial cost, but maintenance, longevity and the need to repel deer and the cemetery’s other wildlife, she kept thinking about a glass feature, even though at the time she wasn’t sure what would be possible. 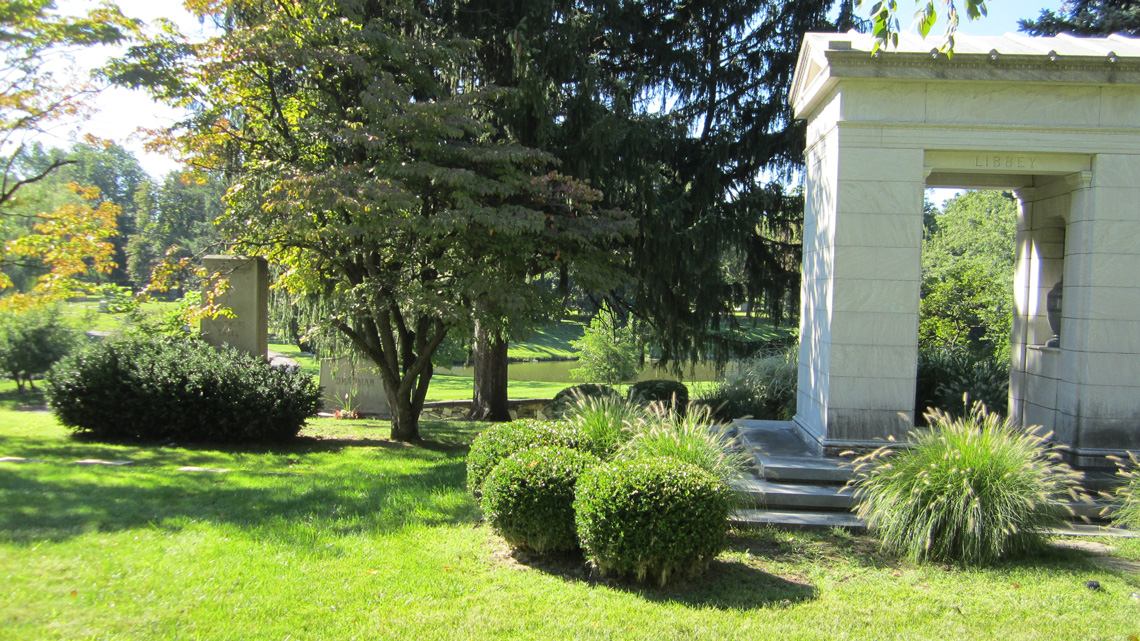 In the design she presented to the cemetery board and the Libbey trustee, along with the low-growing Franklin’s gem boxwoods and the white sunpatiens was a 6 foot by 8 foot area labeled “glass feature.”

“Alyce Juby, the trustee, said, ‘Check it out. Find out what’s possible. It’s a great idea. Pursue it,’” says Ansara.

At that point, Ansara and Nil Gallagher installed the living parts of the project. Ansara explains that the boxwoods were chosen because they don’t grow more than three feet tall or more than three feet wide, so they don’t need trimming and deer tend to leave them alone. The sunpatiens met a requirement in Mrs. Libbey’s will that the site be refreshed each spring with a planting of annuals.

“The landscape may seem very simple, but it’s also very intentional,” says Ansara. “The landscape has been pulled away from the monument so it can be viewed from any angle in the cemetery. It frames it and creates an area of discovery. Enhancing the view and using the annual flowers to offset the white monument is all very intentional.”

And, even as the plants were going in, Ansara continued to dig into the idea of a glass feature for the site. Fortunately, she had a ready source of glass information at the Toledo Art Museum’s Glass Pavilion, which includes its own glass hot shop and kiln. She began meeting with Jeff Mack, who at that time was the glass studio manager. She says he showed her what glass could do and that it was possible to include it in the landscape. 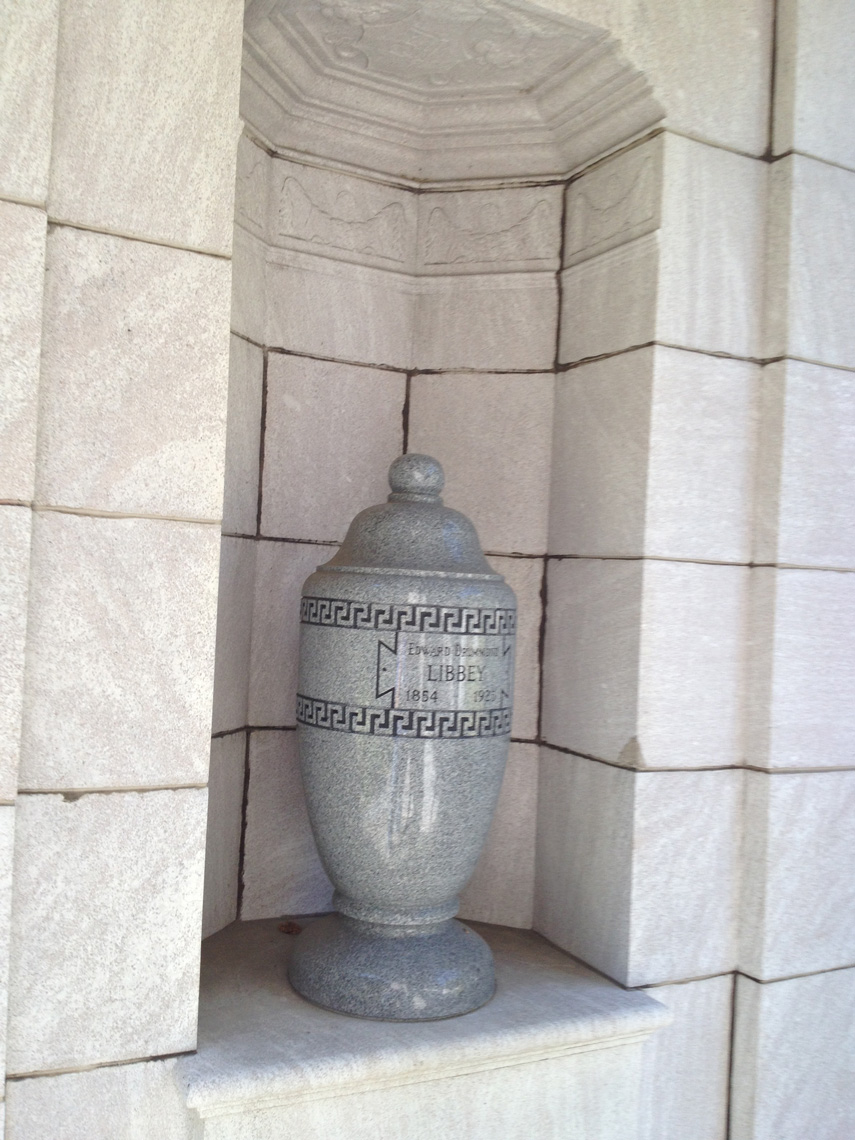 However, her first idea, a glass reflecting pool, ran into serious problems when she presented it.

“Because of the size, they would not have been able to produce the glass panels in-house,” she explains. “The price tag came back very high. I presented it to Alyce, and she came back with a lower price point and said if we could meet that, we could talk about it.”

With that in mind, Ansara continued meeting with Mack at approximately two-month intervals bouncing ideas off each other. 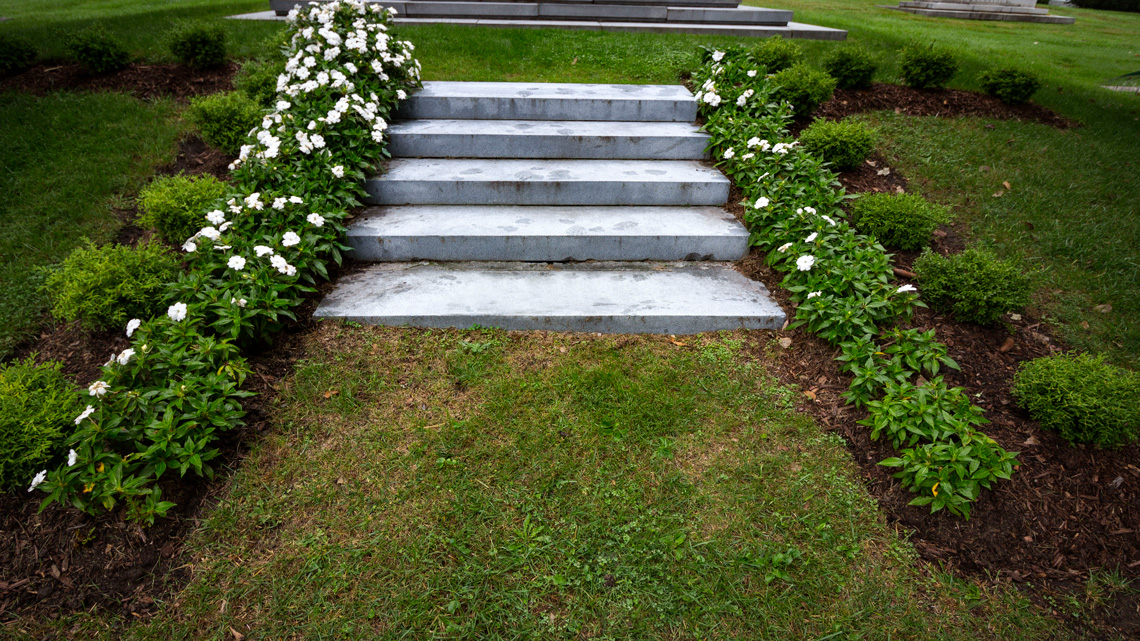 Ultimately, the duo included a third person in their discussions. Jule McMaster, the Toledo Museum of Art archivist, had earlier assisted Ansara with her research on Edward Libbey, and with her help a design was finalized.

“The monument was built by the same architectural firm that built the museum,” Ansara explains. “In looking at old pictures of the museum, there used to be a fountain outside, and this design is reflective of the fountain.”

The final design features glass pavers set in sand (the material of glass), bordered by the same granite that was used for the monument steps, and framed in bronze to echo the art museum roof. The glass incorporates concentric circles similar to water flowing from fountainheads.

“Steve Cothern, the glass artist at the museum, created the pavers,” Ansara explains. “He had to make molds and then rig up a compass to create the concentric circles that look as if water is radiating out of them.

“The glass lenses were hand-cut by Aiden Skully, a glass cutter who used to work for Wedgewood,” she adds. “They’re cut in a design called “hobstar” which is a Libbey pattern used on a punchbowl that won an award at the Chicago Exposition of 1893.”

Toledo Monument provided the granite for the feature, which matches the monument steps, and Dane Turpening and Toledo Twisted Iron fabricated the bronze overlay, the bevels that hold the cut glass lenses and the bronze covers for the bolts. 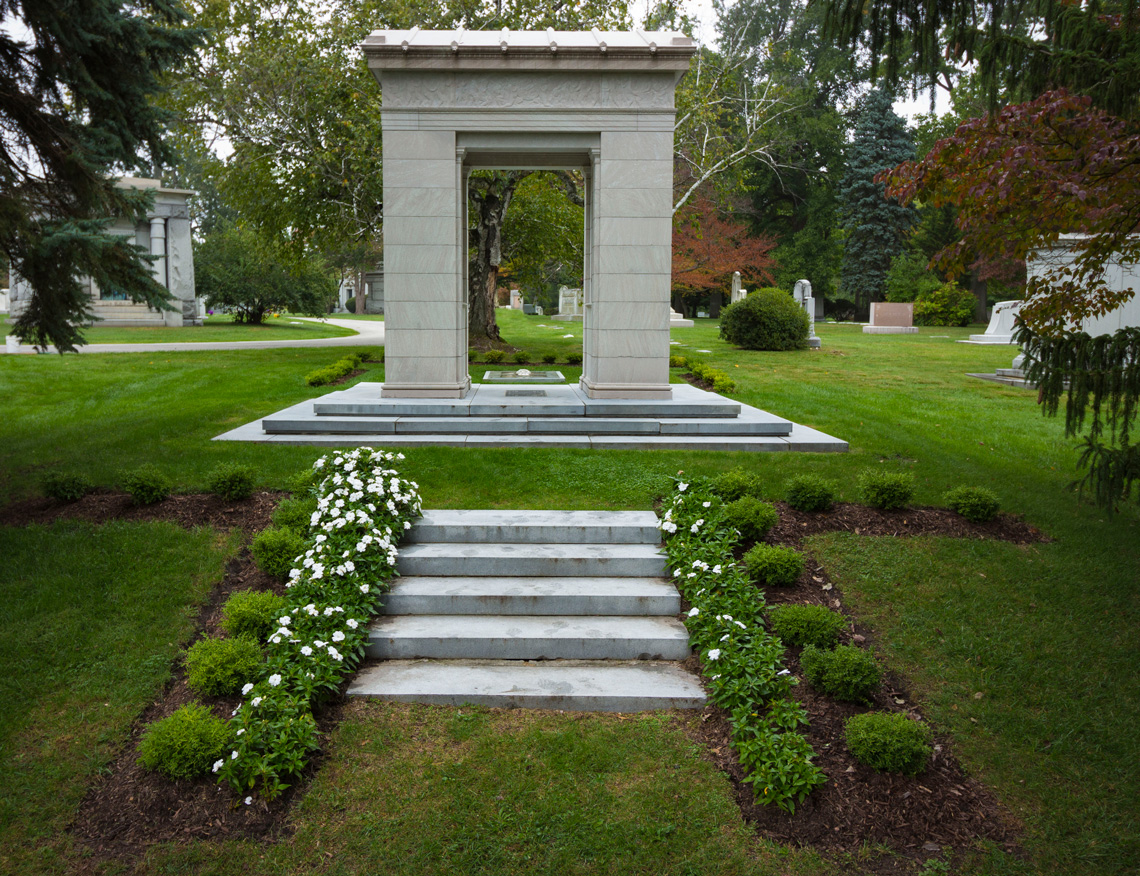 Even then, Ansara says it wouldn’t have happened without the generous donations of those involved.

“Any overages were donated in-kind because it was important to all those involved to make the project happen,” she says. “Everyone wanted to be part of this project because it was for the Libbeys and to support the museum. I’m sure it probably cost three times what the trust paid for it.”

Not surprisingly, Ansara is very proud to have been part of this effort. She says the Toledo Museum of Art played an important role in her own childhood through its art education programs.

“To be able to do this — and I feel do it right — and make it really be special is very satisfying,” she says. “To win an award for it is also very satisfying.”

And, despite all the challenges she faced bringing the total project to fruition, Ansara believes a greater one will be going forward.

“It was easy going in because the cemetery board wanted a showpiece to show what could be done,” Ansara observes. “I hope Woodlawn continues to move in the direction of restoring this to be a rural cemetery and that they maintain it in the way it needs to be maintained.”

Although her research taught Ansara many things about glass, the Libbeys and rural cemeteries, she says what she really took away from the project was a boost to her collaborative skills.

“That’s what I love about my job: making all these wheels come together into a wonderful final product.”