Pershing Square was once known as the Central Park of Los Angeles. The 5-acre square, bounded by three streets (Olive Hill, 5th and 6th streets) was a great urban public space.

But in the 1950s it was remade as the lid of an underground parking garage, and the surrounding streets were widened to accommodate heavy traffic. As a result, the park became an uninspired space, cut off from potential visitors by walls, ramps and one-way thoroughfares. Attempts at remedying the square in the 1980s and 1990s proved unsuccessful. 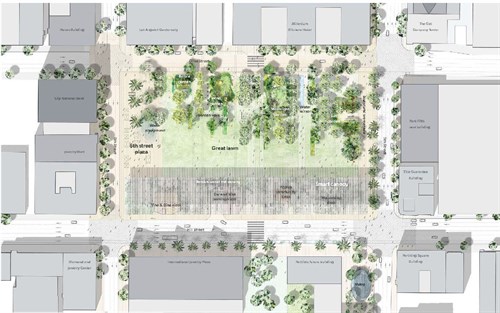 The winning design comes from Agence TER. Bringing the park back to one level and including slimmed down streets, the design reopens the square, welcoming visitors with a great lawn and trees. A block-long shade canopy topped with solar panels extending along Hill Street will invoke a 19th-century open market, sheltering farmers’ stands, restaurants or performances.

Local designers are fond of the idea because, as L.A. landscape designer Wade Graham says in the Los Angeles Times, “This plan comes closest to realizing the holy grail of good public squares, which is providing people a place to stage their own programs, spontaneously and unpredictably, without micromanagement by designers. The best such spaces, such as the typical Italian piazza, may have nothing in them at all, just four streets edging a wide-open shared commons, where life may play out according to its own plans.”

Editor’s note: This article was originally published in July 2016 and has been updated.