Story Of A Landscape: Masonry Shines In Backyard Showcase

It’s often true that you get a job based on who you know. For a massive residential landscape project that involved a pavilion, patio, pool and water feature, Zachary Koolen had a very important “in:” the pool contractor was his father.

That probably was the only thing easy about the job, which took Koolen and as many as a dozen crew members from his Cedarcroft Landscape and Design, plus subs, more than four months to complete.

In the end, however, Koolen came away with some valuable experience – and recognition from the Landscape Ontario Horticultural Trades Association for a residential project from $100,000-$250,000. 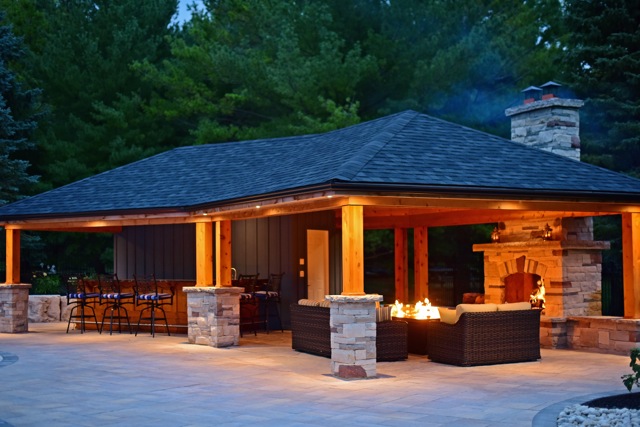 “My dad has a pool company – he’s been around for about 28 years – and he had already put in one pool for the client at his previous home,” says the younger Koolen. “Around here, they typically call a pool company and the landscaping comes after that. In this case, we quoted on the project and came up with a design and the client was happy.”

The project gave Koolen lots of space in which to design, and the clients’ wish list was quite extensive. The home is set on a hillside on a 10-acre lot, and he estimates about five acres was in grass behind the house. They were, he says, looking for a place to entertain.

“On our consultation, we get a bit of a wish list out of the client,” he explains. “They wanted a building, and they were flirting with a fireplace, plus they wanted a water feature. And, they were getting a 22 foot by 44 foot Gemini pool with an extra bump out.” 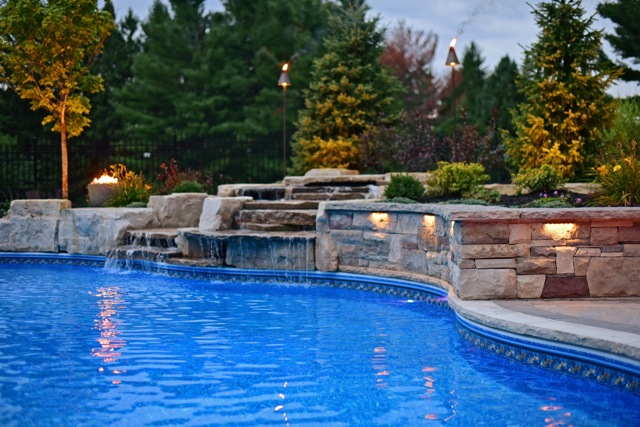 One of the first things the job required was moving the home’s septic system. From there, the yard was extensively graded for the installation of the pool and patio as well as two courses of retaining walls.

“We graded the backyard down in two tiers,” Koolen explains. “On the house side of the pool we cut it in about four feet into the ground, and then stripped the patio area. There’s a pretty steep hill and a large swale toward the back of the yard, so we saved the topsoil we could and kind of leveled that out a bit.”

The company also brought in additional loads of soil for the back of the yard and ultimately finished it all with hydroseeding.

“We wanted to push water away from the swimming pool so if there’s a torrential storm the pool isn’t overflowing,” he observes. “Sometimes you can get water trapped between a retaining wall and the pool, and we didn’t want that. It wasn’t a big concern, but given the vast size of the patio we wanted to be able to handle the water.” 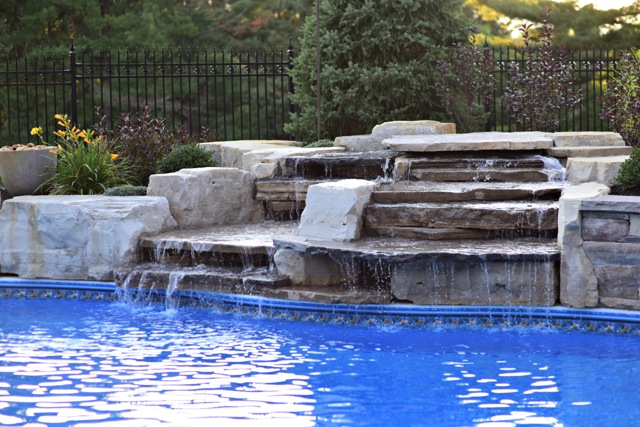 The project required an impressive amount of masonry. The patio itself is made of two different materials. Cedarcroft installed approximately 3,500-square feet of Unilock’s Beacon Hill interlocking pavers, and another 1,000 square feet of oversized flagstones.

“We’d overlay them and cut them,” Koolen says of the flagstones. “There are no big gaps anywhere. It almost looks like stamped concrete.”

“They’re block-shaped pieces of stone,” he says. “Each course is about 30 inches tall, and we fit them together with a lot of chipping, hammering and cutting so we don’t have any gaps between them and we won’t get filter cloth bulging out or any erosion onto the patio.”

The stairs and the coping around the pool are of the same stone. Koolen says the treads are 16 inches deep, 7 inches high and 12 feet wide, or what he describes as “a grand staircase.” 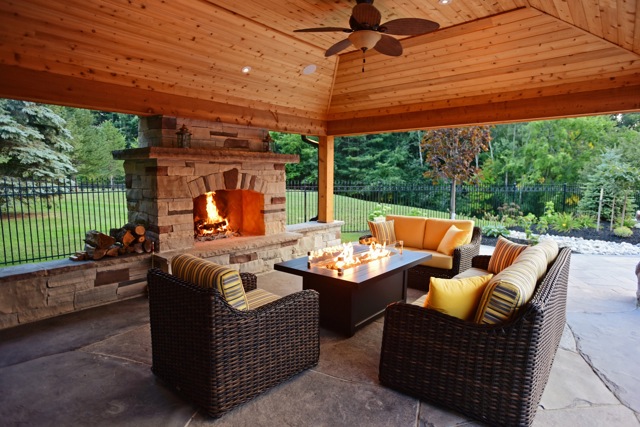 Masonry has a real starring role in this project. A cedar-framed pavilion with a cathedral ceiling on one side of the patio features a full stone fireplace and full bed masonry supports for the cedar beams.

“The fireplace was made from scratch from beginning to end,” says Koolen. “We call the stonework ‘dry-pack.’ It has no mortar joints on the face of it, but we used mortar to hold it together; it’s just all behind the face. Every stone was trimmed and chipped and hand-cut to fit the contour of the next ones.”

Koolen estimates the fireplace, which reaches above the roofline, took about three weeks, and the masonry supports another two. Nor is the fireplace the only fire feature in the pavilion. The clients also wanted a gas fire bowl in the seating area for times when they didn’t want to build a wood fire in the fireplace.

The pavilion also features a full bar with sink, refrigerators, custom-made cabinets and granite countertops. An enclosed area behind the bar contains the pool equipment and the controls for the low-voltage landscape lighting and sound systems.

“There’s also an outdoor shower off the back side of the pavilion,” Koolen says. “Although the sink is tied into the septic system, the shower lands on a big piece of flagstone with some holes cut in it, and we put in an infiltration bed. That also keeps the rainwater from the roof from collecting in the septic.”

Masonry also plays a critical part in the water feature Cedarcroft installed. Koolen says his company has a reputation for installing natural-looking water features, and while the clients had wanted the feature to come out of the woods behind the pavilion, because of the grade and access into the backyard, it ended up being placed on the other side of the patio.

“It’s made of the Armour Stone and flagstone in a series of different colors,” he says. “We had walls tie into each side of the feature so it looks like it’s eroding out of the wall.”

To get the water to flow in a natural-looking way, Cedarcroft utilized a custom-made manifold at the top to disburse the flow at its source. And, to give the client some of the look he had wanted initially, the company planted the area with a series of trees, including sugar maple, Siberian spruce and Colorado spruce.

Perhaps it’s not surprising that Koolen says he’s most proud of the project’s massive natural-stone fireplace.

“The whole project turned out pretty good,” he admits. “Because of the way we built the fireplace from scratch it took a lot of time and allowed us to get creative, as well.” 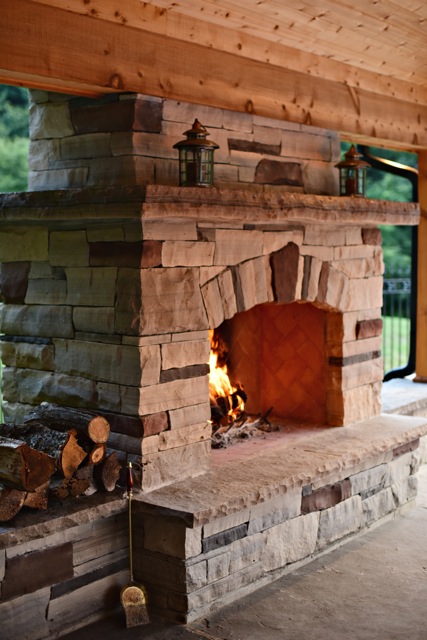 However, it wasn’t the job’s biggest challenge. Koolen explains that because of the size of the lot and access to it, moving materials offered by far the greatest challenge.

“The access was good, but it was just a long way,” Koolen says. “It was probably 800-1,000 yards from where we could dump material out of the dump trucks to the job site. We had to move all of it with skid steers, and you can imagine how long each bucket of gravel and each bucket of soil took.”

Not surprisingly, that created another challenge: the job took longer than both the landscape company and the client anticipated. That alone provided Koolen with a learning experience, but he says the job was really his company’s first of this magnitude, so he learned a lot of other management skills along the way to its completion.

“Keeping schedules and materials and all the trades busy – I learned a lot about that,” he says. “It’s helped me keep my other sites moving more efficiently. There’s also the matter of contracts, and making sure things are stated so there are no surprises along the way.”

A lot of it is simply getting the details figured out ahead of time. And, he adds, it’s encouraged him to suggest as many things as possible early in the process so there aren’t last-minute additions that pop up, particularly those that would have been easier to implement earlier in the construction process. 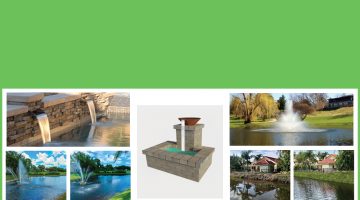