Aesthetics and safety work to solve these client's concerns about a dark backyard.

Start with a master plan for the clients’ backyard that adds a pool and spa, a fire pit, a fishing dock and a deck balcony, and it all evolves into what Haury calls, “a good-sized project.”

And, setting it all off is a lighting plan designed to solve the problem of a very dark yard at night while offering a complement to what Mother Nature provides during the daytime.

Haury explains that the job came from a referral from an existing client.

“The people had owned the house for a bit and saw some potential,” he says. “They wanted to expand on the little patio they had in the backyard, so they sat down with our design team and started discussing specifics.” 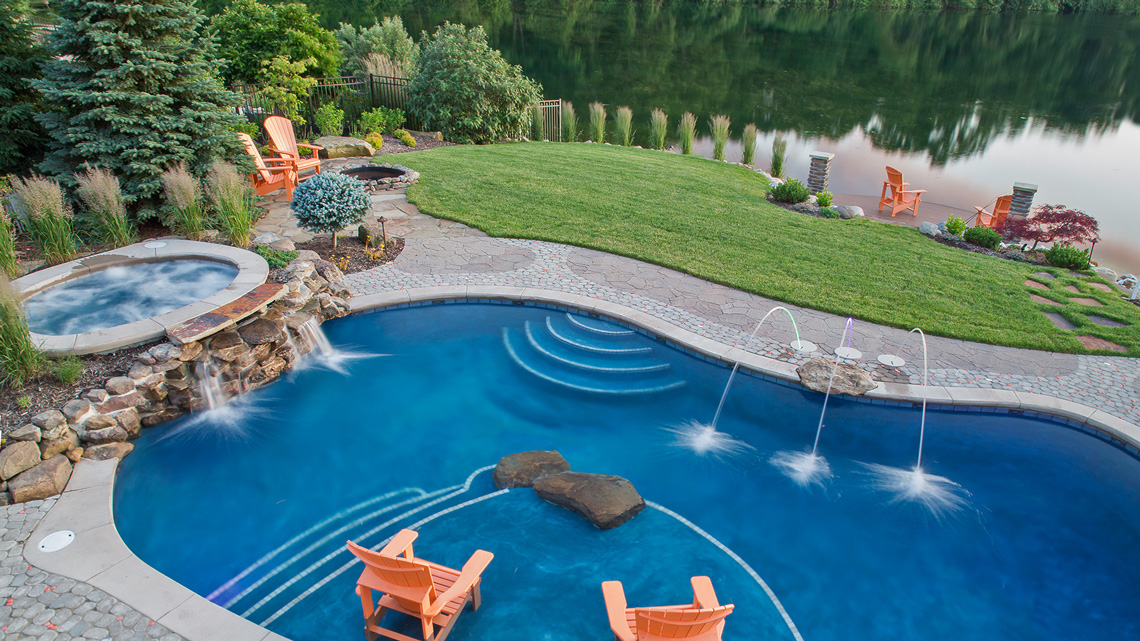 Included in those specifics was what he refers to as an “added amenity” in the lighting feature.

“With just about any project, lighting really sets the tone,” says Haury. “It’s not just the fixtures, although the path lighting provides character and aesthetic appeal. The result of any good lighting can really set off a landscape at night.”

Because of the scope of the project, Haury says anywhere from three to eight men worked on the site at any given time. Work began in the fall of 2014 and wrapped up the next spring following a winter break. Construction of the pool and spa were subcontracted out, as well as some of the electrical work.

However, the rest of the construction, including the second-floor deck off the master bedroom, was handled in-house. Haury says Suncrest has the capability to handle the deck construction, although it’s not something it does frequently.

“We don’t do tons of them, but it’s like building a covered pergola or a three-season room,” he says. “If it’s an amenity to the outdoor living space, we have it in our skill set to be able to do that for a client.”

In this project, the clients’ desires concerning the lighting also drove the selection of at least some of the hardscape material. Because in-ground lights were to be used around the pool, the decision was made to install Techo-Bloc’s Antika pavers in a flowing river pattern for the pathway and adjoining the concrete pool decking.

“Obviously, the designers had to consider the texture, the color and the pattern of any of the hard surfaces and work that in with the lighting,” says Haury. “In this project, there’s recessed lighting in the pavers and we had to make them fit, so that was part of the material selection process.” 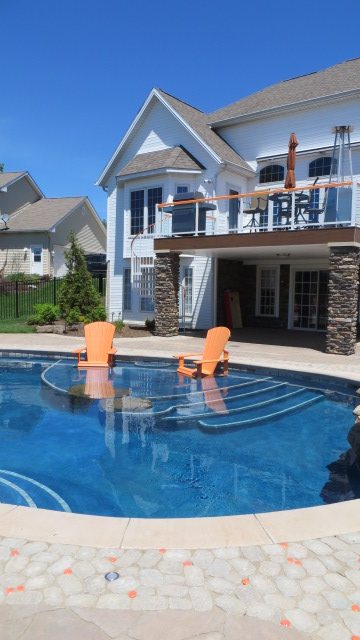 Along with the inset lighting in the pavers, the clients wanted an orange color theme, which shows up in several locations in the project, including the Adirondack chairs and some of the railing on the deck.

“The clients also wanted orange glass inserts among the pavers,” Haury explains. “It’s a bit quirky, but the look is good. The rest of the masonry is a natural Maryland flagstone.”

As for the lighting itself, Haury offers a count of 54 different fixtures, all low-voltage LED with a controller with access to Smartphone technology.

“There’s the path lighting, and some up-lighting on some of the trees,” he says. “There are also insert lights on some of the pillars. Everything was strategically placed, and safety was a consideration, as well as aesthetics. It’s particularly important to have good lighting around the pool in a setting like that.

“We’re very proud of the lighting program for this project and the way it was installed.” 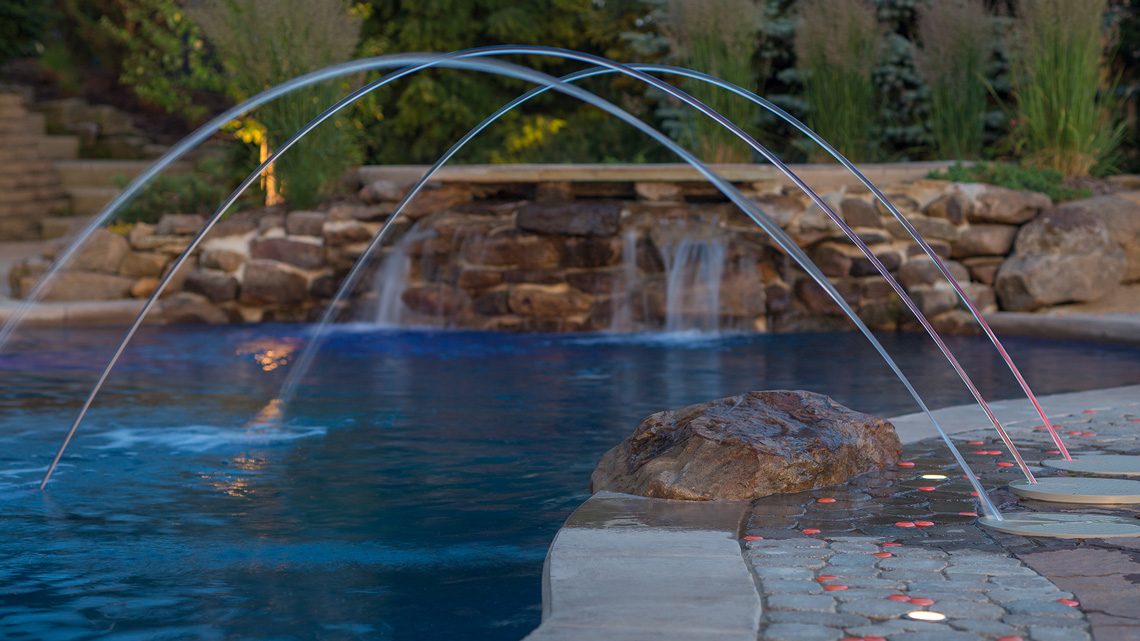 And, he notes that besides being a winner in the lighting category, the same project had won recognition the previous year in one of the overall construction categories.

As for the reason for his overall pride in the project, Haury says that’s simple: it’s a great use of space.

“This is not a large property and there were some privacy issues involved,” he says. “Not only were there some large plantings used to screen some adjacent neighbors, but the overall use of space is just outstanding. We got a lot done there.”

In fact, Haury lists the proximity of the neighbors as one of the bigger challenges to the construction. Not only was it challenging to stay within the property’s footprint but it increased the logistics of moving materials back and forth, as well.

And, he adds that logistics offered an additional challenge, as well.

“The timing on all the processes was also critical, as it is typically with any project of this size,” he observes. “It’s a matter of getting the pool in at the right time, and the rough electrical, and the base materials. Then, it’s just a matter of working your way out of it.” 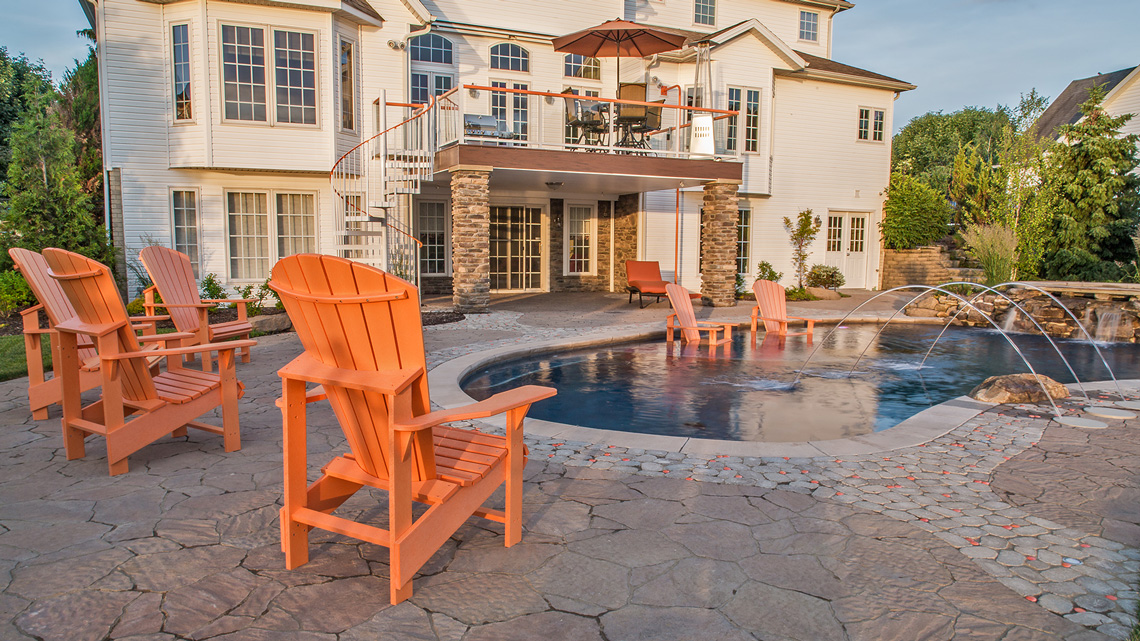 In general, though, he says there weren’t any snags. Although Haury says every job offers its own learning experience, because of the size and scope of this job Suncrest used it as a teaching situation for some of its junior staff.

“It gave us a chance to do some onsite training with crew leaders who want to be foremen,” he says. “They got to see how the site was staged and how the senior foreman worked through the project. In the same way, we have one registered architect on staff who’s just cutting his teeth in the industry, and he got a bit of a training exercise in watching the process flow.

“We’re always trying to teach somebody how to step up.”

But, then, he says that’s what awards programs, such as the OLA one, are all about.

“We like to participate,” Haury concludes. “It gives our staff a good feeling when we win an award, and we can post it in our conference room and show people just what we can do. It’s all good.”

Next post Monsanto Sues to Keep Glyphosate Off List of Carcinogens in California: This Week's Industry News