A less than stellar backyard layout was transformed to an entertainment oasis with the help of Bahler Brothers, Inc. of South Windsor, CT.

How important is good word-of-mouth? For South Windsor, CT-based Bahler Brothers, Inc., it can cross generations. When a local couple opted to redo their entire home — inside and out — for the landscape upgrade they turned to the firm the homeowner’s father has utilized shortly after Bahler Brothers’ opened its doors in 1985.

“It simply got transferred on down the line,” says Ryan King, the designer who conceived and supervised the rework of the family’s pool and patio area, and coincidentally won the 2018 award for use of a combination of hardscape products in a residential project of more than 4,000 square feet from Hardscape North America (HNA).

King says discussions with the client began two years before actual construction. At the heart of the project was a poorly designed space the owners wanted eliminated.

“It was an interesting situation,” he says. “When you walked into the backyard, you had to step down, but then about five feet later, you were stepping back up to get to the original pool and patio. The client wanted to demolish the pool, tear everything out, and then recreate the space so it had a better transition from the backdoor to the pool and patio.”

Fortunately, the clients had a large backyard in which to work the transition and still leave a grassy play space for their children.

“The family really wanted a nice area to entertain friends and family, so they wanted a larger patio,” says King. “And, they wanted a garage/pool house connected with an outdoor kitchen, bar, and fireplace so they could entertain guests even when the weather wasn’t the best.”

Bahler Brothers started the project by demolishing the existing pool and patio, and doing what King calls, “a lot of excavation.” However, the pool area is now reached from a handful of steps off the back door. 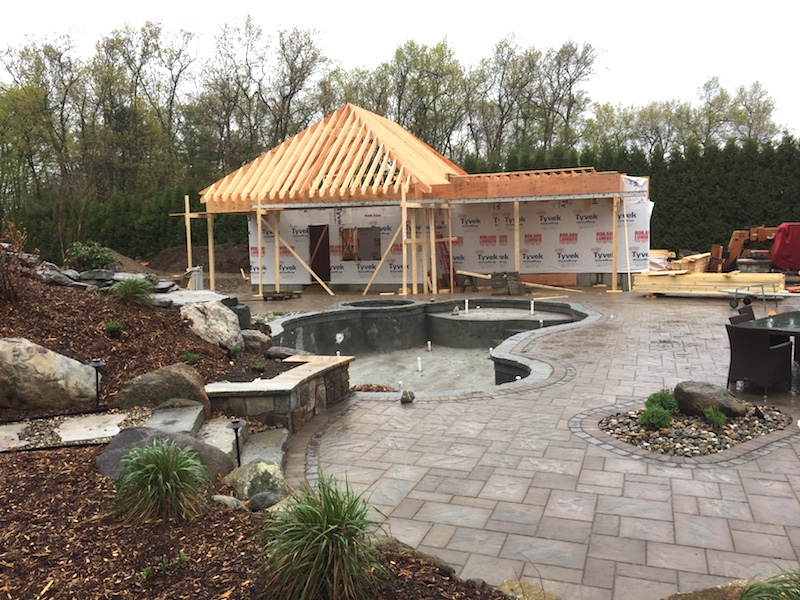 Asked about the most significant challenge, King points to getting rid of the divided levels and coming up with something that flows.

“We wanted to make it feel like one continuous level so that it felt like part of the house,” he says. “Rather than being separated — like the original pool — we wanted a full continuation of the backyard from the back of the house. Just dealing with the elevations and getting the heights correct so it felt like one outdoor living space was a challenge.

To further disguise that the area isn’t totally flat, King says Bahler Brothers did install a couple minimal retaining walls and raised the firepit behind the pool by a couple steps.

Once demolition and excavation were complete, Bahler Brothers teamed up with Aqua Pool of East Windsor, CT, to handle the pool installation.

“The pool is rather large-scale,” says King. “It’s a 40-foot long free-form pool with an attached spa. It also has a full waterfall and grotto. The grotto is maybe seven feet tall and you can swim under the waterfall where there’s a bench for people to sit behind the crashing water.”

To tie things together, the project utilizes natural stone copings around the outside edge to tie in with the natural stone of the grotto.

While the pool was being built, a team of carpenters who were also subcontracted for the job constructed the combination garage/pool house.

“The client was looking for an overall outdoor living experience,” says King. “We installed landscape lighting to help extend the hours of use for this outdoor space.” 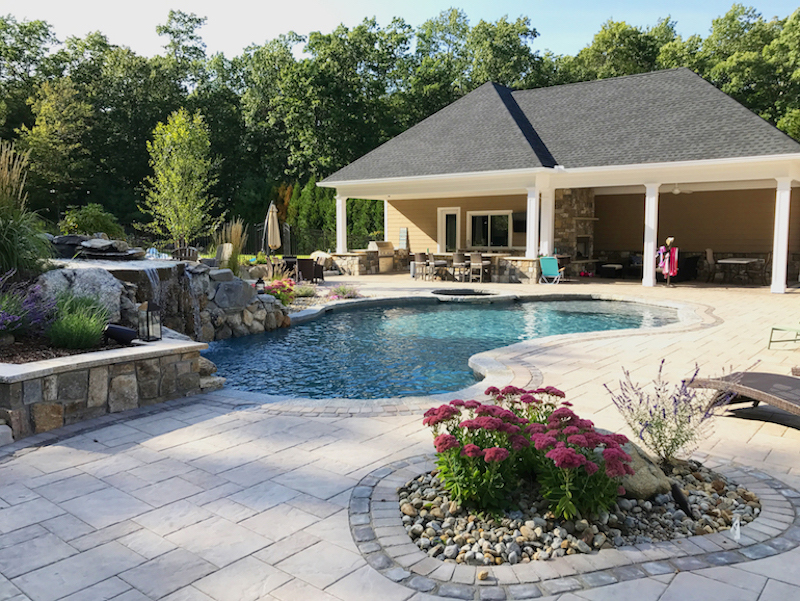 The project utilized lighting from FXLuminaire. King says he opted to use its Luxor lighting because of the products’ ability to zone different lights, as well as adjust brightness and change color.

Other features include a full bar, a grill, and an outdoor TV and audio. The horizonal features, including the pool deck, utilize Unilock pavers, while the vertical surfaces use a natural thin veneer.

“The front of the house features a large veneered area, and the owner wanted to tie that into the backyard,” King explains. “When you pull into the driveway and into the backyard the natural stone continues right through.”

The entire project is a beautiful custom job, he adds. 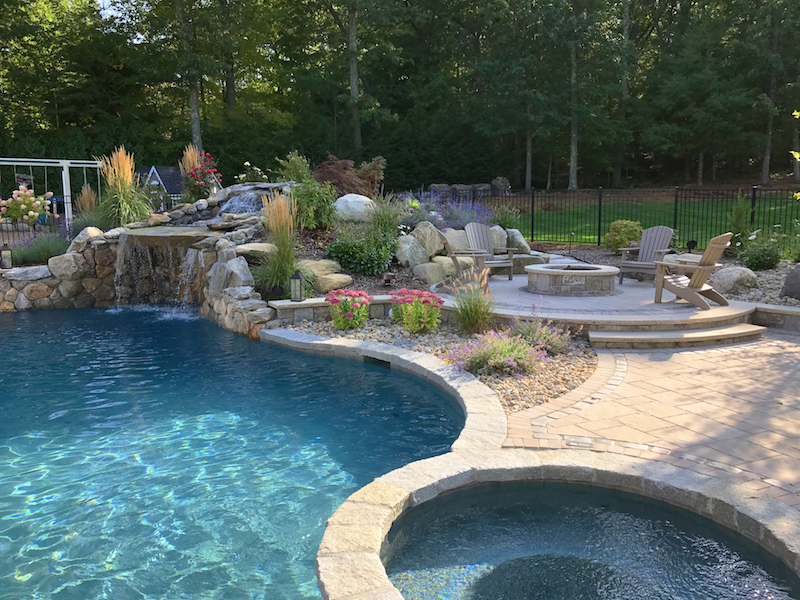 Because the entire property was being remade, Bahler Brothers also worked on the front landscaping. For instance, with the new garage and expanded driveway, the company installed a decorative paver border around the driveway addition to tie things together. The firm also installed a new front walkway.

New softscape was also installed throughout, although King says privacy for the large lot was protected with a lot of existing trees.

“The owner wanted to continue the natural feel,” he says. “He had a lot of plants he wanted to reuse that were in good shape, so we used as much as we could. A lot of our plantings focused on the grotto to draw attention to it with different colors and heights and variations with a focus on summer-blooming plants.” 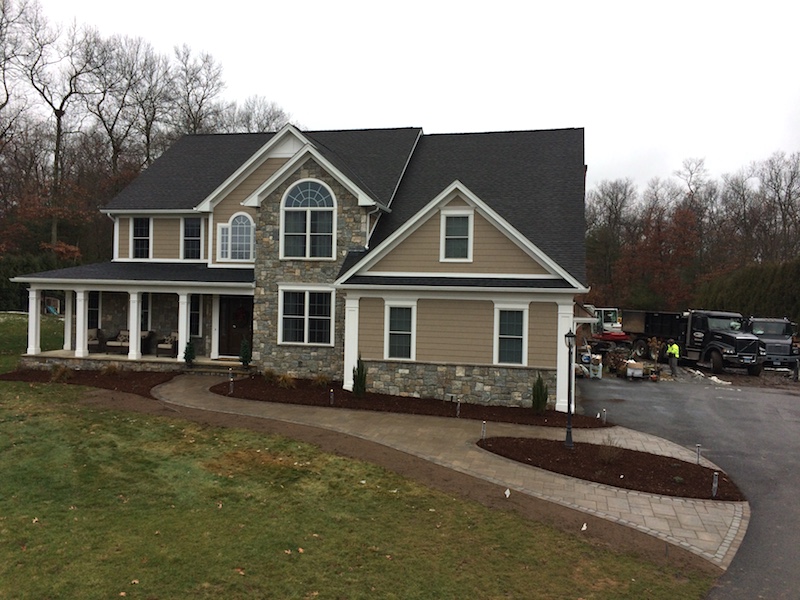 As with many clients today, there was also an emphasis on low-maintenance.

Drainage mainly focused on keeping runoff from pitching into the pool, and King notes that softscape played a role there, too. Rather than putting a patio drain in the decking, plant beds were designed within the patio to handle some of the runoff.

He estimates that Bahler Brothers had has many as five men on the project for approximately three months. And, getting things coordinated between them and the subs provided a learning experience for him, King says.

“I learned a lot about coordination of the different contractors, and certain techniques to help ensure the project continued smoothly, without having to do anything twice,” he says. “It was an overall great learning experience.”

Still, he describes the high-end and complex project as a fun one on which to work.

“It pretty much incorporated every outdoor feature, from the grotto on the pool to a full outdoor kitchen with a bar, the fireplace, firepit, lighting,” King says. “It was fun to incorporate everything into one backyard; it was just a fun renovation.”

And, he concludes, the relationship is continuing, although whether that will extend to another generation is yet to be seen.

“We did landscape maintenance for them last season, and also applied a patio sealer,” King says. “We’ve also talked a bit about doing more landscape plantings in the far backyard.”