It's game time! Outdoor recreation areas will keep your clients active in their landscapes.

It’s time to convince your clients to create backyards for their homes that can replace expensive vacations, including recreational opportunities like bocce ball and pétanque courts, putting greens and even chess boards. Your clients might already have swimming pools, but use these other recreational additions to boost their outdoor living.

Putting greens can be a great option for property owners who have children and also enjoy entertaining friends. Karen Filloon, director of marketing and business development at Southview Design in St. Paul, Minnesota, says they installed a putting green for a family who wanted a resort-style outdoor space. The homeowners requested putting greens because they said they thought golf would be a good game for their kids to learn.

“It seems to be working,” Filloon says. “One of the sons is taking golf lessons.” 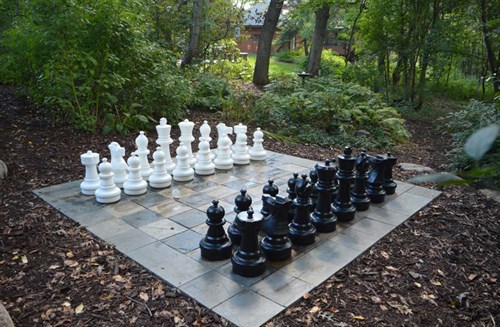 On another project, Southview Design installed a regulation horseshoe pitch for a Minneapolis homeowner who was looking to include an outdoor pastime in a small side yard. The homeowner’s neighbors even come over to join in the competition.

“One 80-year-old neighbor said the sound reminded her of her schoolgirl days when her father and uncles would play in the evenings after dinner,” Filloon says. 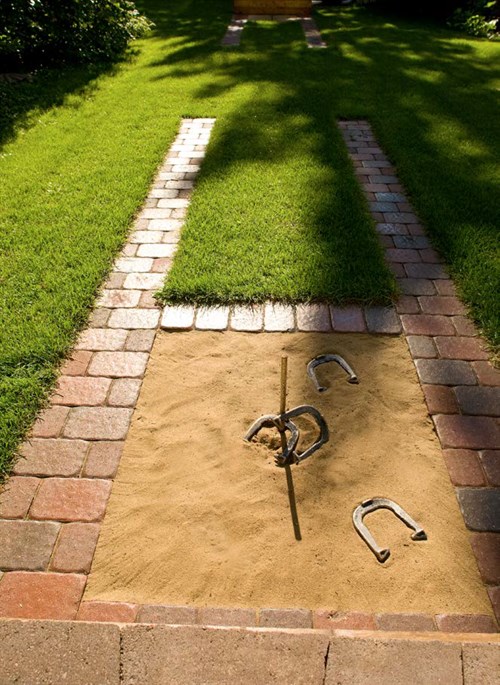 Creating a giant chessboard is not a typical outdoor recreation game installation, but Southview installed one for homeowners with five grandsons who enjoy playing chess, according to Filloon. With a bolder wall for seating, the chessboard is in a wooded area behind the home. The board itself is made of natural stone and the chess pieces are weighted with sand, Filloon says.

Needing a new driveway was the ticket to installing a sport court for another Southview Design client. “This family loves hockey and basketball,” Filloon says. “When it was time for a new driveway, they needed a design that would let them play the games that they love, without having a negative visual impact.”

The lines of the court are a part of the paver pattern, not painted on. According to Filloon, crews traced out the perfect arcs of the 3-point line, and then removed the affected pavers and carefully cut each brick to size. 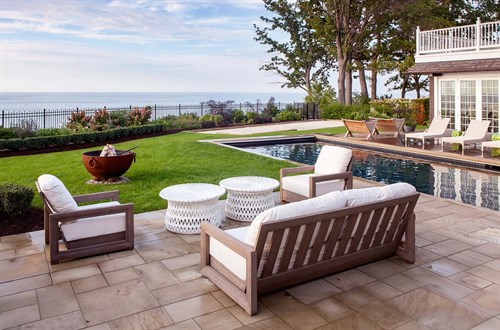 The owners of a Cleveland, Ohio, property on Lake Erie requested something unique for their yard — a pétanque court. Brandon Barker, commercial operations manager of J. Barker Landscaping Co., says that this was the first time the company had installed a pétanque court. Pétanque is a French bowling game that is similar to bocce. The pétanque court is located adjacent to the pool, with Lake Erie as the backdrop. “It’s filled with crushed oyster shells with sandstone providing the border,” Barker says. “We rake it out for them when we do maintenance and occasionally fill it with more oyster shells.” 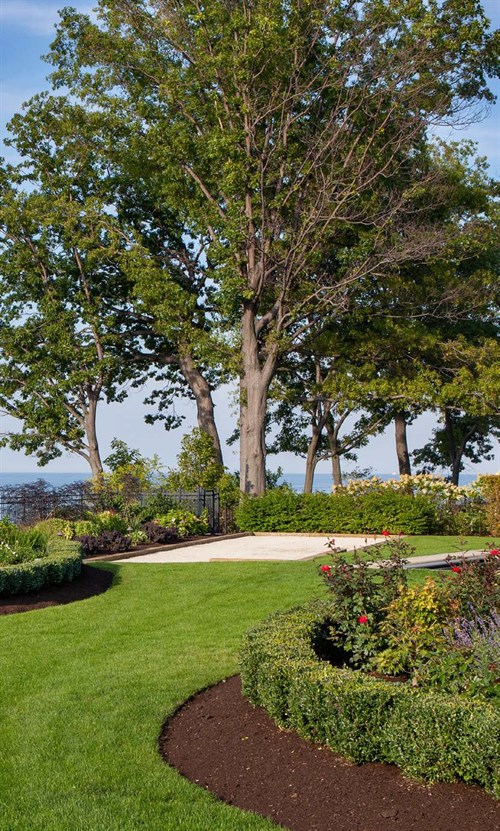 Joe Huettl is a licensed landscape architect and contractor at Huettl Landscape Architecture in Walnut Creek, California. For putting greens, they typically use synthetic sod. Huettl has even designed a combined putting green and bocce ball court. The Mill Valley project is an example of using synthetic lawn for the putting green, which is below the outdoor spa. 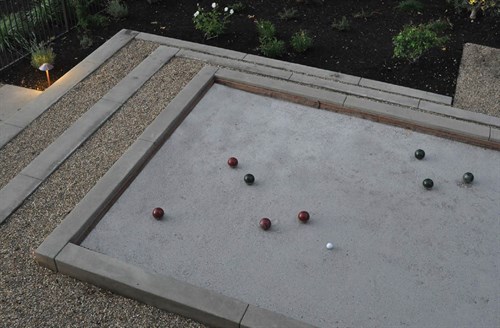 The bocce courts typically have crushed oyster shells, which Huettl says is softer for the bocce balls and prevents chipping that would occur with gravel. Usually clients request a bocce court, or Huettl says he will suggest one for an extra area or a side yard that’s not being used. 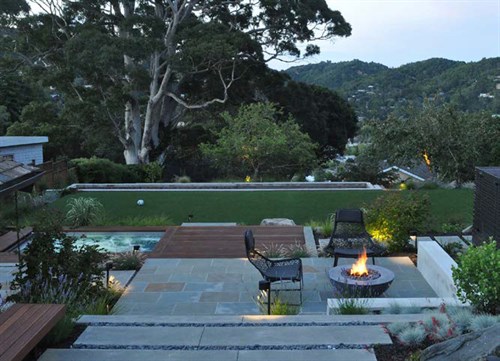 The Northgate project completed by Huettl Landscape Architecture has a bocce ball court in the side yard where people can sit around and watch the game. The court has oyster shells and a concrete curb wall with redwood bumpers on the inside. 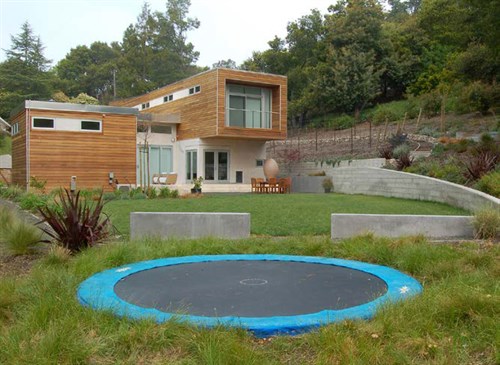 Although bocce courts are fairly low maintenance, it is expensive to build and install using concrete as the main material. For one project, Huettl used steel and wood to build the bocce court curb. Gravel was originally used for play, but the clients later upgraded. The clients at this property also had an in-ground trampoline installed.

Hobbies for the Home

Scott Neave, company president of the Neave Group, installs sports courts and putting greens depending on the client’s interests and hobbies. “Some clients belong to country clubs and want it at their homes, too, in the form of a putting green,” he says. The Neave Group puts synthetic turf in all putting greens and performs maintenance by resetting the cups and rolling with a heavy sod roller. 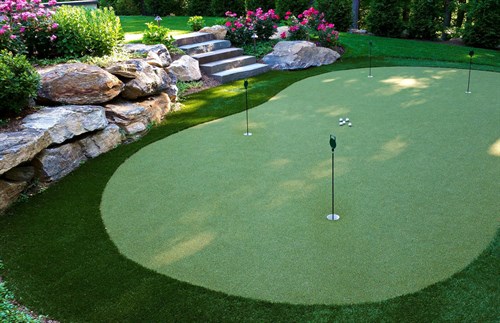 While serving some client’s closer to New York City, Neave comes across situations where a sport court or putting green can’t be installed or there are certain property restrictions that would make a rec area complicated.

Typically, before installing a sport court or a putting green, Neave is looking for a place that would be a great location and the putting green would be a good use of space in that area of a property. What would have otherwise been a difficult area can sometimes be an ideal area.

“There’s been a big increase in outdoor living,” Neave says. “It’s seldom the client wants just a patio. They want the entire package.” 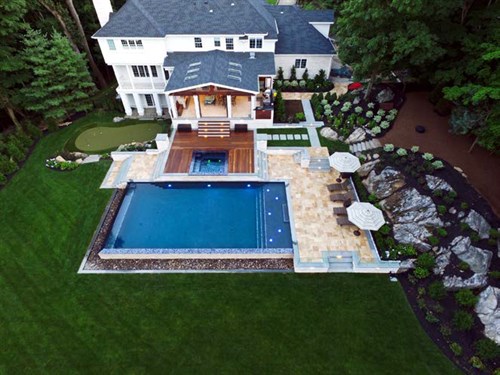 When serving the high-end residential customer who wants the full, outdoor living package, it’s important that the outdoor area becomes a part of the house. “As a company, we love to do these multifaceted projects,” Neave says. “They’re more complex but they’re gratifying.”

One way Neave and his team stay up to speed on trends and potential project issues is by having a lot of the outdoor living elements in their own yards. He says by using their own yards, they can test new ideas and understand how something fully works and whether or not to recommend it to a client.