A Naples, Florida landscape architecture firm not only designed and installed the award-winning Port Royal Residence landscape, the firm is now also handling its maintenance.

Some landscape projects just keep on giving, and Christian Busk has a good example. The owner of W. Christian Busk Landscape Architect and Busk & Associates, Naples, Florida, not only designed and installed the landscape for what’s known as the Port Royal Residence, but the firm is now also handling its maintenance.

However, his relationship with the property, for which he received recognition from the Florida Nursery Growers and Landscape Association (FNGLA), goes well beyond that. He designed the original landscape for the acre-and-a-half lot some 30 years ago.

Originally built for a wealthy Swiss émigré, the property had subsequently changed hands before being purchased by a Canadian couple as a winter vacation home. The new owners brought in both Busk and the architect who designed the home, which Busk describes as being about 3,000 square feet. 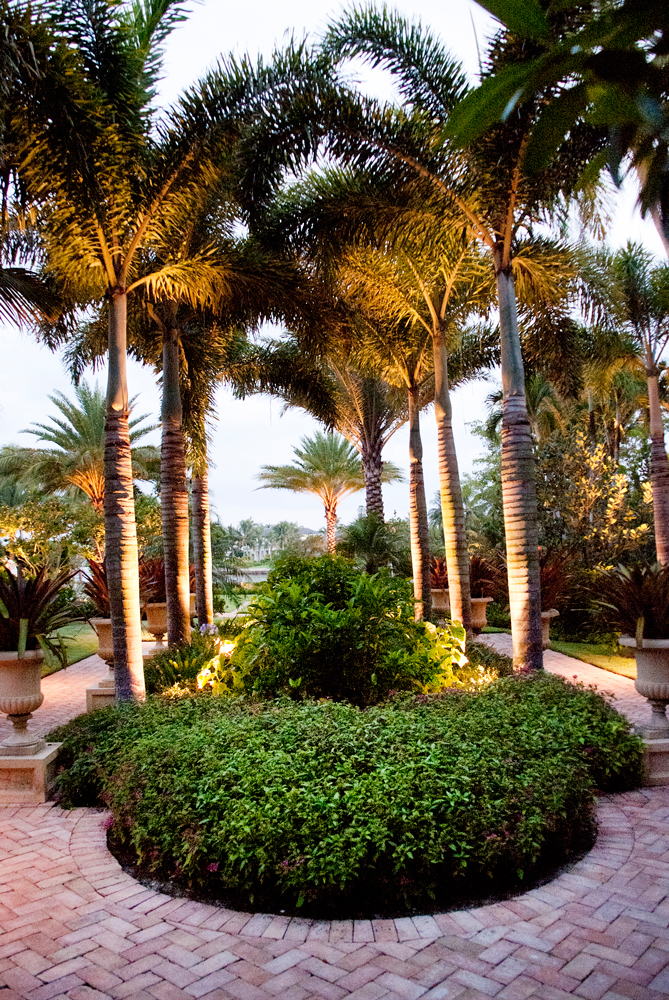 “The original entry is tiny—maybe 6 feet wide—for this supposedly grand home,” says Busk. “He asked the architect, ‘What would you do to improve the original entry? I think it should be a little different.’ But, the architect said, ‘I wouldn’t change a thing.’ So, the owners asked me what I’d recommend.”

Faced with a 30-year-old driveway, he didn’t recommend simply leaving it in place.

“I suggested a water garden with a new staircase and a bigger landing area at the end of the driveway,” Busk explains. “We lifted the grade about 3 feet, made the driveway a little larger so you can have two cars parked side-by-side and included a beautiful hierarchy of different palms.

“It makes the driveway and entrance look exceptional instead of just average,” he adds. “It makes a grand landscape scene to the street.”

The rear of the property presented several different challenges. A large one was the pool. Busk explains that when he did the project for the Swiss woman, there had been an existing pool on the site that was torn out rather late in the game.

“The house was designed around that first pool, but because of that I just added on to what had been there,” he says. “I looked at my original pool and said, ‘This looks a little dated, it’s 30 years old and everybody wants a lounge shelf and disappearing edges.’”

Rather than start from scratch with the pool again, Busk instead proposed adding a lounging area for the owners and their two dogs, and then another water garden with a place for sculpture. 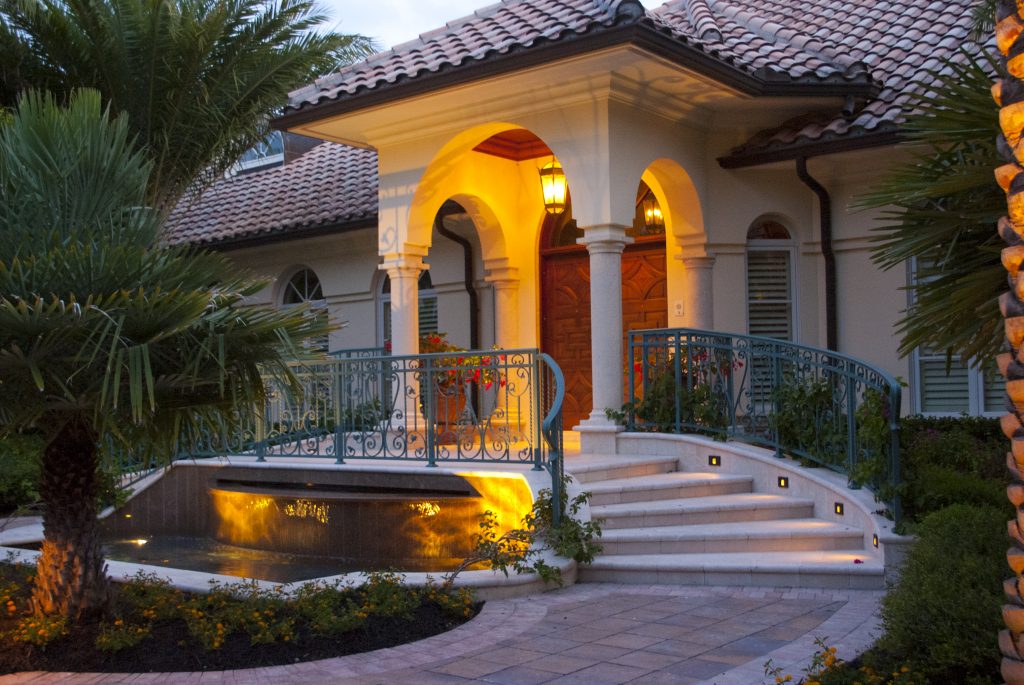 “There is more walkway than I’ve ever done with any residence, with brick panels separating it from the grass,” he says. “I could put Marie Antoinette out there and she’d feel comfortable.”

Still another problem dated back to the pool that was torn out 30 years ago. Busk felt it left the waterfront at the west end of the property too low, and the natural stone border was regraded and raised 2 feet.

Changing the elevation highlighted what Bush says was his biggest challenge with the whole job: what to do with the existing garden. In the case of the waterfront, he ended up removing a tree that had been part of the original shoreline.

While adding eight symmetrically placed palms at the rear of the property, he says he was also faced with coconuts that had grown to 40 feet in height, and citrus that had gotten buggy and mangy, among other things.

“We did a tropical garden for the original owner, but this wasn’t about a tropical garden anymore,” he says. “It’s a different scheme, so the biggest challenge was working with some of the original pieces and trying to give it a whole new look. It was a matter of dissecting every part of the garden and putting it back together.” 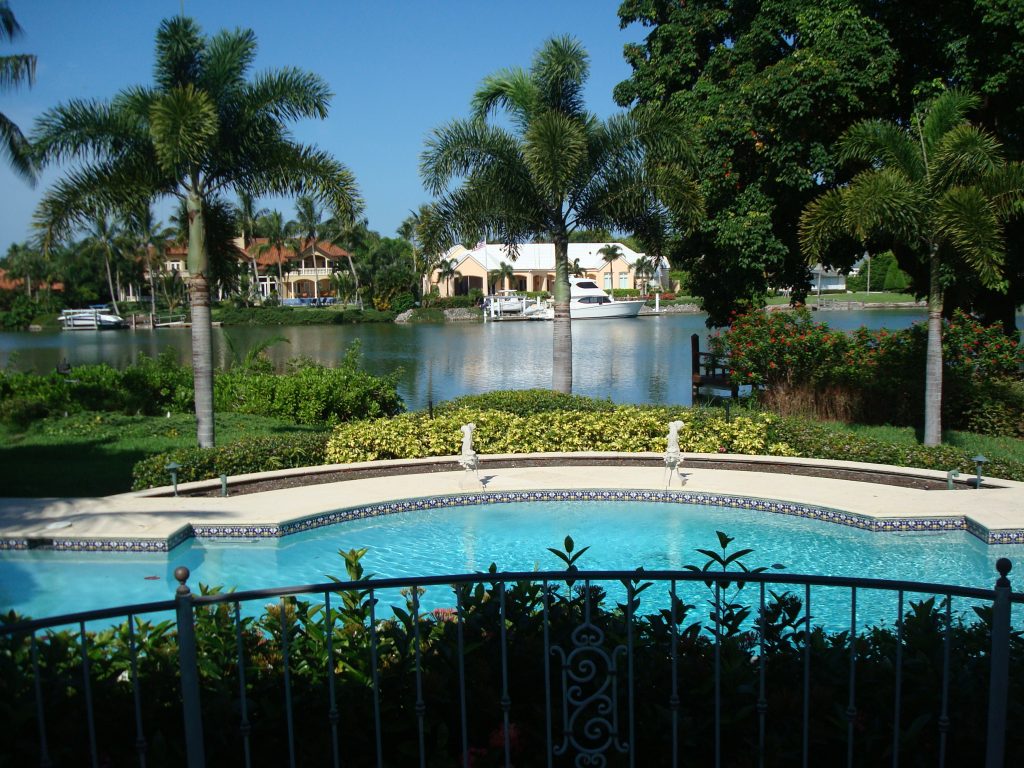 Busk, who has a degree in turf management, as well as one in landscape architecture, feels he succeeded.

“In the end, we got a rich garden with foliage,” he says. “However, it’s not a brand-new garden.”

It’s also not an inexpensive one. Busk says by the time the job was completed, the homeowners had spent more than a half million dollars.

“They thought they were going to spend less, but this is a garden that was tailored to fit their lifestyle rather than just an average landscape,” Busk says. “They wanted to totally revamp it.”

The quality of the project is also a reason Busk & Associates is continuing to do the property’s landscape maintenance. He says he just can’t let this garden go.

“You can do the best design and have the best installed garden, but if there’s poor maintenance, it doesn’t show over time what the garden can be,” he concludes. “Gardens change over time as they mature, and I enjoy making the garden an exquisite piece that no one else has that they can enjoy over time.”

What’s your story of a great landscape? Share details with us in the comments below.

Next post Seven Ways To “Green” The Landscape For Earth Day

Previous post This is What True Environmentalists Do on Earth Day