Red Rocks Park with its very large red sandstone outcrops, has been an inspiration in Colorado since the early 1900s.

This mountain park in Jefferson County, Colorado, is owned and maintained by the city of Denver as part of the Denver Mountain Parks system. The red sandstone found throughout Red Rocks Park is geologically identified as belonging to the Fountain Formation, which means these rocks are considered to be between 290 and 296 million years old. The rock formations at Red Rocks even have names — from the mushroom-shaped Seat of Pluto to the inclined Cave of the Seven Ladders to the most visited rocks around the amphitheater, which are Creation Rock to the north, Ship Rock to the south and State Rock to the east.

Within the park boundaries is the Red Rocks Amphitheater, a world famous and award-winning venue for hosting concerts and events that’s a favorite among many performers because of its near-perfect acoustic surroundings. In fact, after being awarded Pollstar magazine’s Best Small Outdoor Venue 11 years in a row, the magazine named the award after the venue, taking it out of the running. 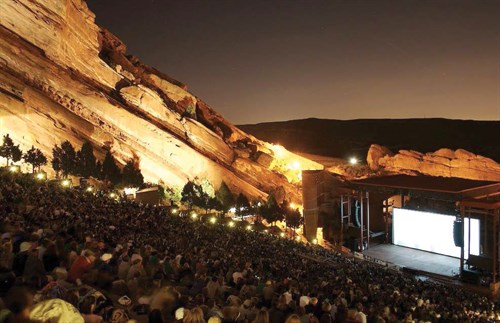 And, this year, the park and amphitheater are adding to their status after being named a national historic landmark, along with Mount Morrison Civilian Conservation Corps Camp, the spot where workers stayed while they built the park’s famed amphitheater in the 1930s.

“The outstanding architecture and landscape architecture of Red Rocks Park and Mount Morrison Civilian Conservation Corps Camp illustrate the principles and practices of New Deal-era naturalistic park design and master planning in a metropolitan park, as well as the use of Civilian Conservation Corps labor to develop such a park,” the National Park Service said in a news release.

Colorado Gov. John Hickenlooper agrees. Red Rocks is “renowned as the only naturally occurring, acoustically perfect amphitheater in the world, and the diverse landscape attracts thousands of outdoor enthusiasts and even dinosaur fans,” he says. “The Mount Morrison CCC camp is another historical treasure in the park, and one of the few surviving camps in the nation.”

Red Rocks is the 25th national historic landmark in Colorado.

Editor’s note: This article was originally published in September 2015.