Story of a Landscape: Addressing Function in a Beautiful Way

How one contractor found creative answers to problems that arose in a residential landscape construction project.

When it comes to solving even the most complex problems, Venessa DiBona doesn’t shy away. Take the case of a residential lot here that suffered from both a steep grade and poor drainage.

At the same time, local regulations constrained how much built coverage she could actually use to resolve what she says, bottom line, was a house that was, “ugly and not very functional for the elderly residents.”

It helps to know that the owner of Fort Lee, New Jersey-based Vee’s Botanicals also owned a home improvement business early in her career, which let her serve as a general contractor as the client enclosed the existing front porch for storage and built a new one under her direction. 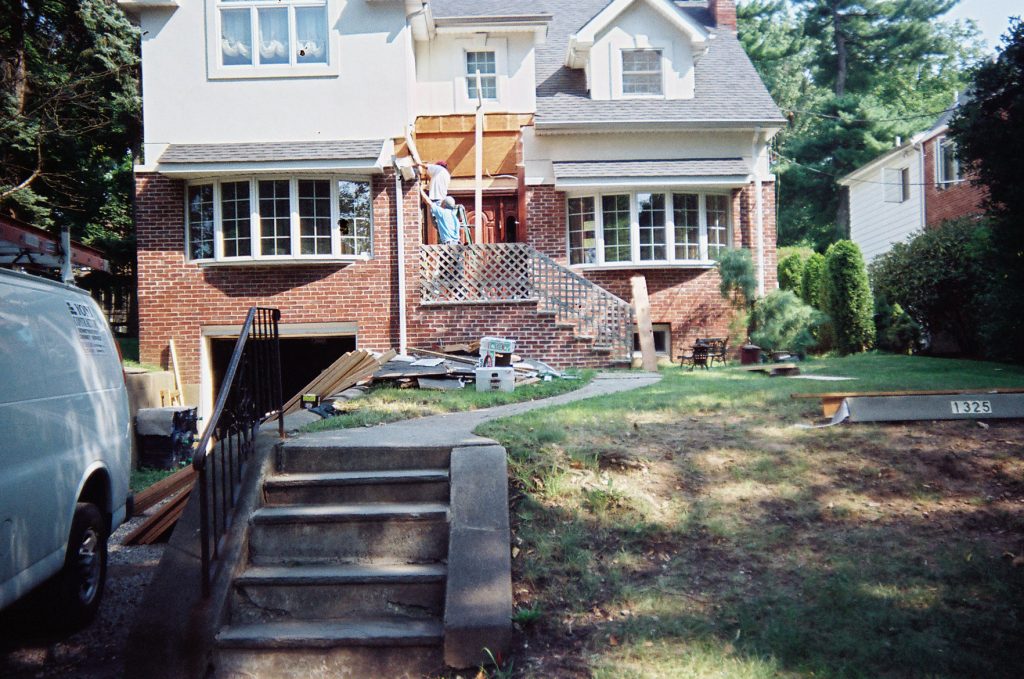 Somewhat ironically, DiBona was referred to the clients by someone from the neighborhood for whom she had worked previously and who had raised a fuss over the existing lot coverage.

“In this town, coverage is a really big deal, and they had limits,” she explains. “I have a reputation for solving those hard-to-solve problems. I’ve been able to figure out ways to get things done when other landscapers and designers haven’t been able to.”

She was particularly distressed by the front appearance of the home.

“The porch had a shed roof with a set of steps that went sideways into the middle of the bay window, and then it had a 2-foot wide walkway that went out to the front where there was no public sidewalk,” DiBona says. “We were able to enclose the porch and give them closet space, then create a new porch that was smaller.” 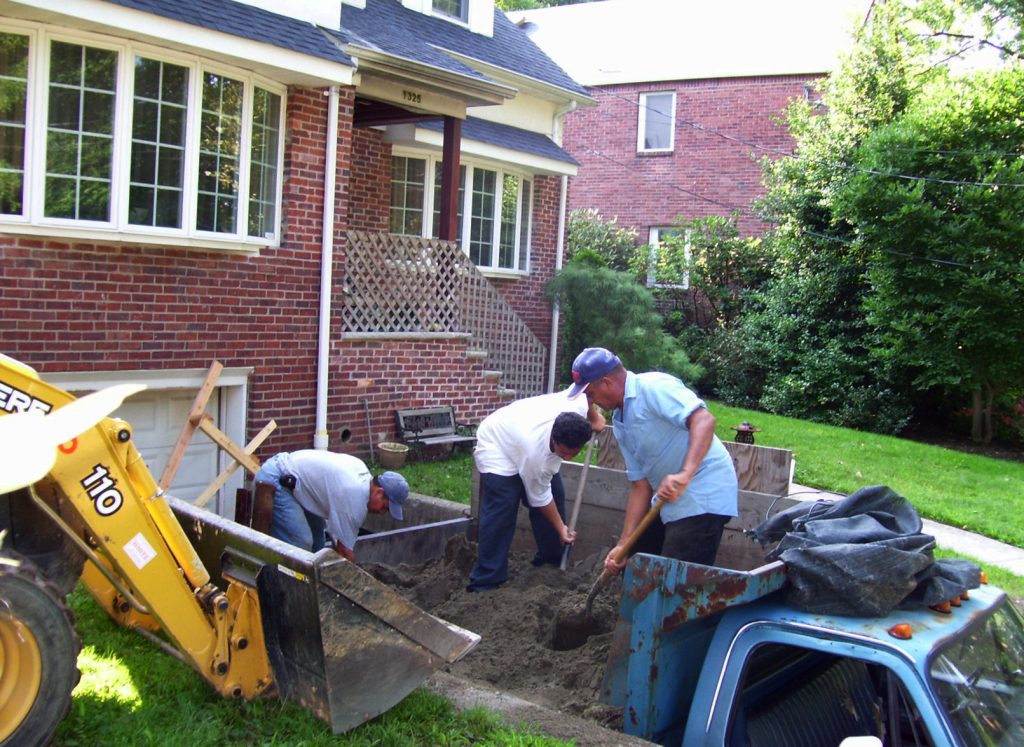 However, the excavation for the steps wasn’t without its own drama. The digging turned up a fuel oil tank that the property’s owners weren’t aware of that had to be removed.

Simply re-doing the front steps also reduced coverage, as areas that had been 5 or 6 feet wide were replaced by a cascading paver stairway 4 feet wide at the base, decreasing to 3 feet after an intermediate landing. Because she was working on the front of the home, as well, DiBona also made good use of veneer stone to make an aesthetically pleasing whole of the existing brick façade and the pavers. 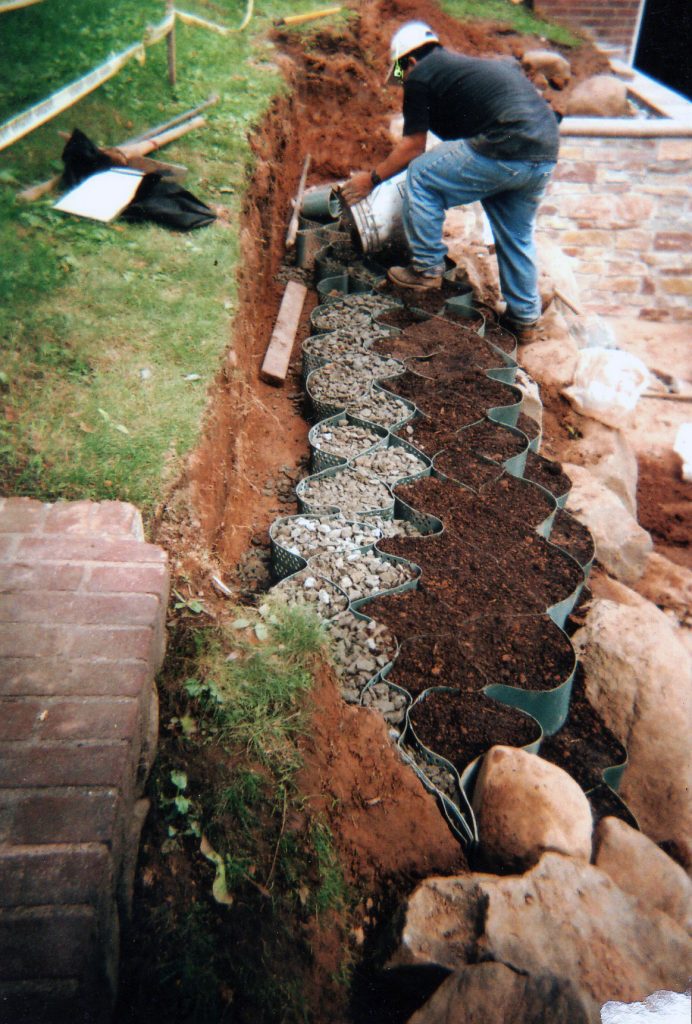 “I’m really particular about shades of color, and tried my very best to use the veneer stone to tie together the other two materials,” she says. “I used vinca minor as the base of my plant palette and then accented it with warm colors for the client.”

While the new steps saved some coverage, DiBona made much larger strides in that direction by cutting back two cement walls that were 40 feet long and 4 feet tall and went from the garage to the street.

“We cut those at 10 feet from the house, and then put returns on them,” she says. “We also used veneer stone there.”

The biggest savings in reducing the property’s coverage came with the removal of one of the walls. The front walls of the adjoining property owner and her client were siphoning water into the front of the client’s property and creating a ditch. DiBona said she had concerns about the stability of her client’s wall.

“I decided to meet the neighboring property without having a wall,” she explains. “Based on my past experiences, I knew that if we were to use architectural boulders in place of a wall, those boulders are not counted as lot coverage, so I used them as a base, and was then able to create a stacked living wall.”

To construct the wall, DiBona had to think outside the box, so she relied on an expanding honeycomb product made of heavy-duty plastic that had been invented for the military to stabilize areas for tank transportation in the desert. 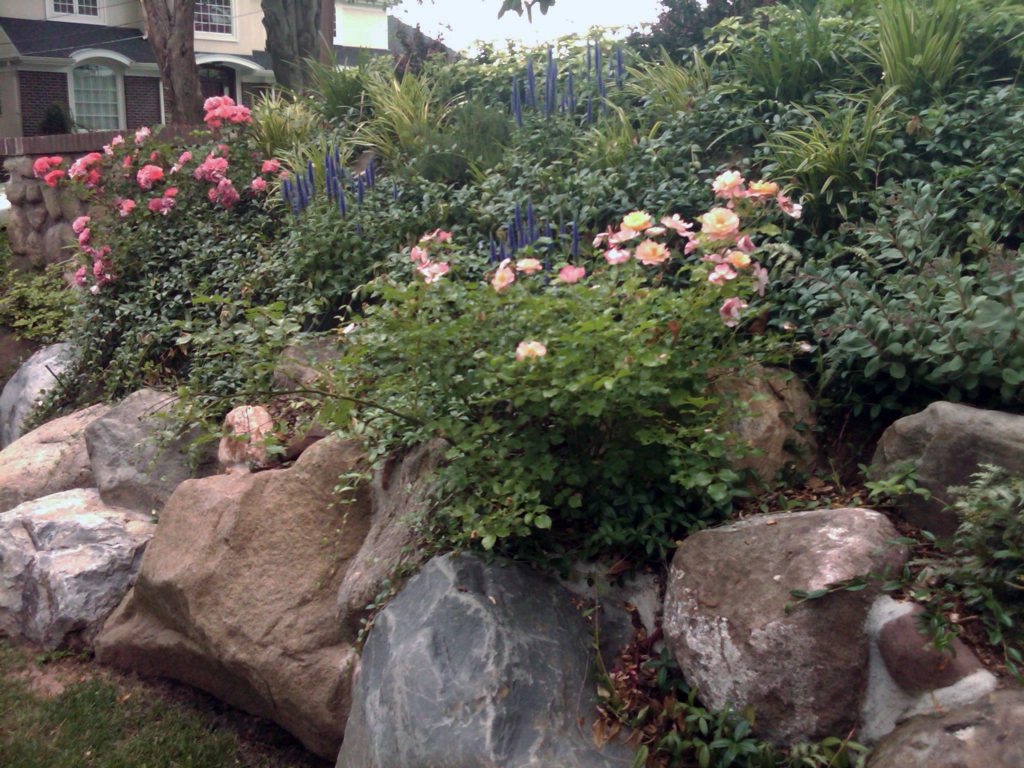 “I cut them in 3-foot strips, stacked them on top of the boulders and filled them with earth to make a living wall,” she says. “The area at the back was filled with gravel.”

In doing her excavating, DiBona also found an existing drain tube, which she replaced with a perforated pipe, allowing water to exit to the street. Although that type of system is no longer allowed by the state, because the tube was already in the ground the system was grandfathered in.

“By pushing that wall out to the neighbor’s property line and removing 40 yards of soil from the front, we widened the front yard,” DiBona says. “That framed the house from a broader view, making the new matching peaked roof and columned entry the balanced focal point.” 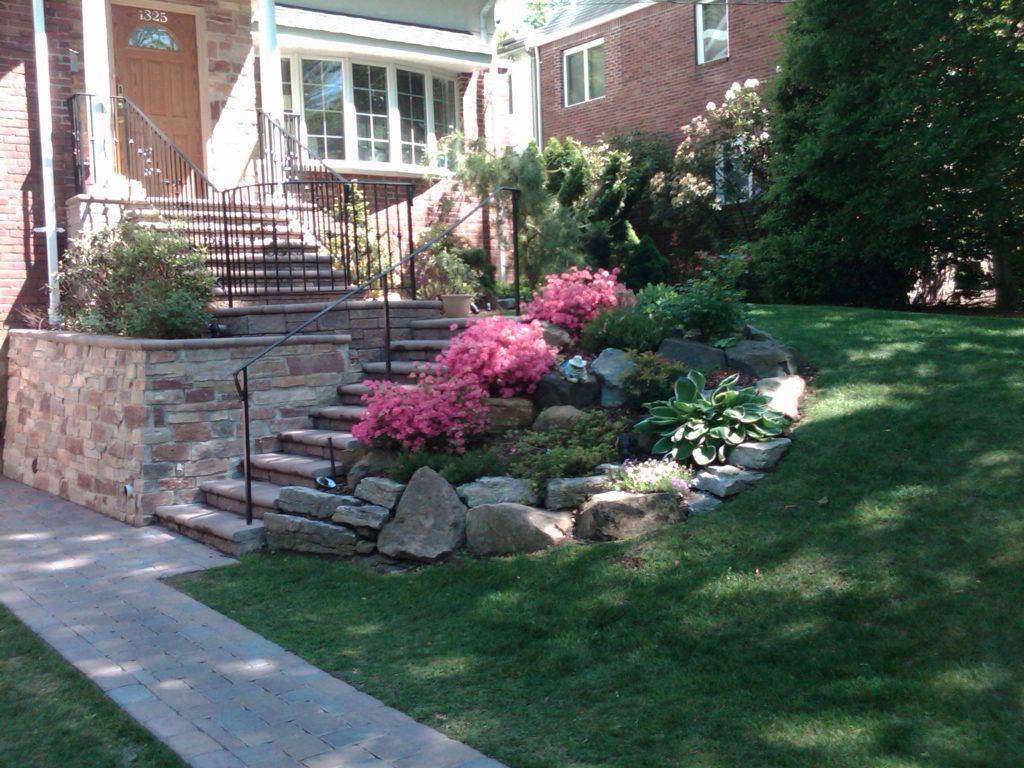 Replacing the wall with boulders also helped save enough coverage that the owners were able to finally have a backyard paver patio. The client had initially put in a patio away from the back door several years earlier, but had to cover it up based on a complaint from the neighbor.

“As we were cutting and filling, we ran into the old patio,” she says. “We exhumed it, power washed it and incorporated it into the new patio because the homeowner asked us to. I love being able to use reclaimed materials and the like as it is great for the environment — one of my interests. It was kind of fun to be able to exhume the old patio and reuse it.”

As for incorporating both old and new construction, DiBona compares the look to a Persian carpet with different pavers in the middle and a herringbone border around it.

With so many large challenges to the project, DiBona says she’d be hard pressed to choose which one was the biggest. However, her greatest satisfaction is the way it all came together. 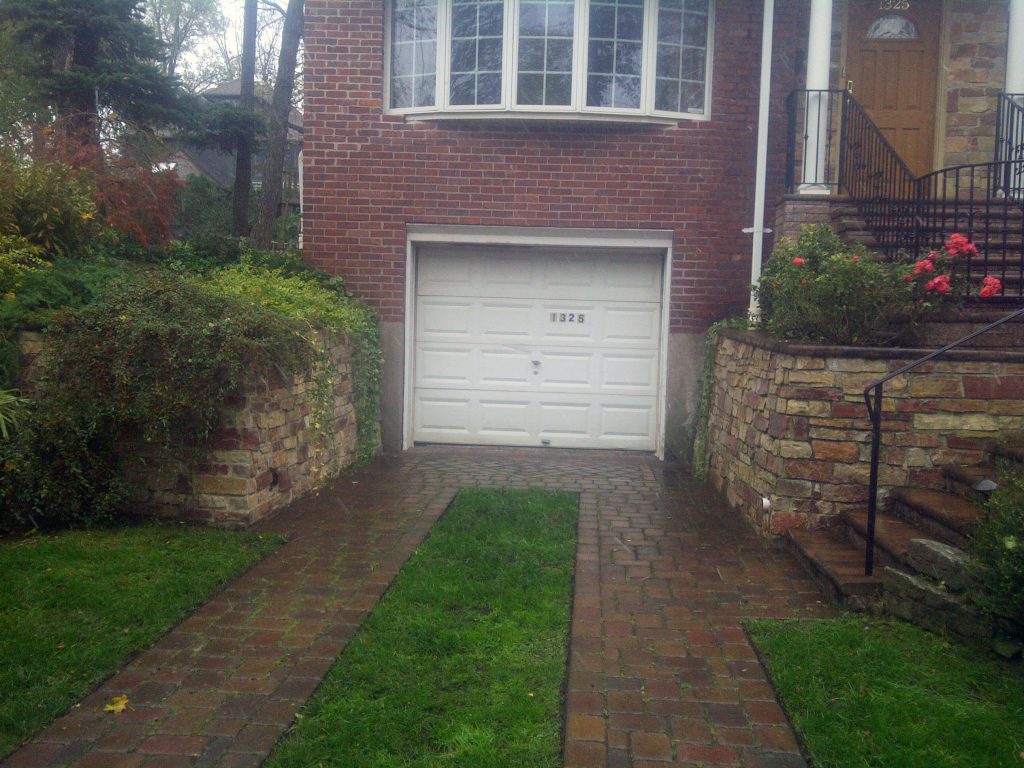 “It resolved so many problems for these people,” she says. “Even the neighbors said, ‘This was worth waiting for.’ And, I just love analyzing a site and all the factors involved, then incorporating the needs of the family and bringing everything together.”

The approximately $62,000 project won an award of merit in the residential category for projects of $50,000-$100,000 in 2012 from the New Jersey Landscape Contractors Association. While DiBona hasn’t entered it in any other competitions, she has had the dual satisfaction of using the property as a showcase for her work, while continuing to maintain it, even though the clients for whom the work was done have sold the home.

“They sold the property and were able to increase the value of it when they sold,” she says. “It was quite a bit more than they would have been able to sell it for before the landscape construction; it’s pretty dramatic.”