Stunning views of the Dallas skyline make this rooftop garden a great getaway for a penthouse guest.

Is it even truly a landscape? It is outdoors, but 23 floors above street level at the top of the The Ritz-Carlton, Dallas.

Still, it took all the skills of Harold Leidner and his crew at the eponymously named Harold Leidner Landscape Architects in nearby Carrollton, Texas, to complete the job, which ultimately cost seven figures and has proven to be quite popular on Houzz.

Leidner says the location alone would create expectations of a top-tier, high-end residential project. The space was created when the two penthouses on top of the Ritz-Carlton were combined to provide the buyer with the entire rooftop and three separate garden areas that were accessible from different areas of the residence.

“He had unique views of Dallas from the 23rd floor, and each exterior room was created a little differently,” says Leidner. “One is for dining, and one has a little more entertaining focus. The client is also a big collector of art, and then you have spectacular views of the Dallas skyline.” 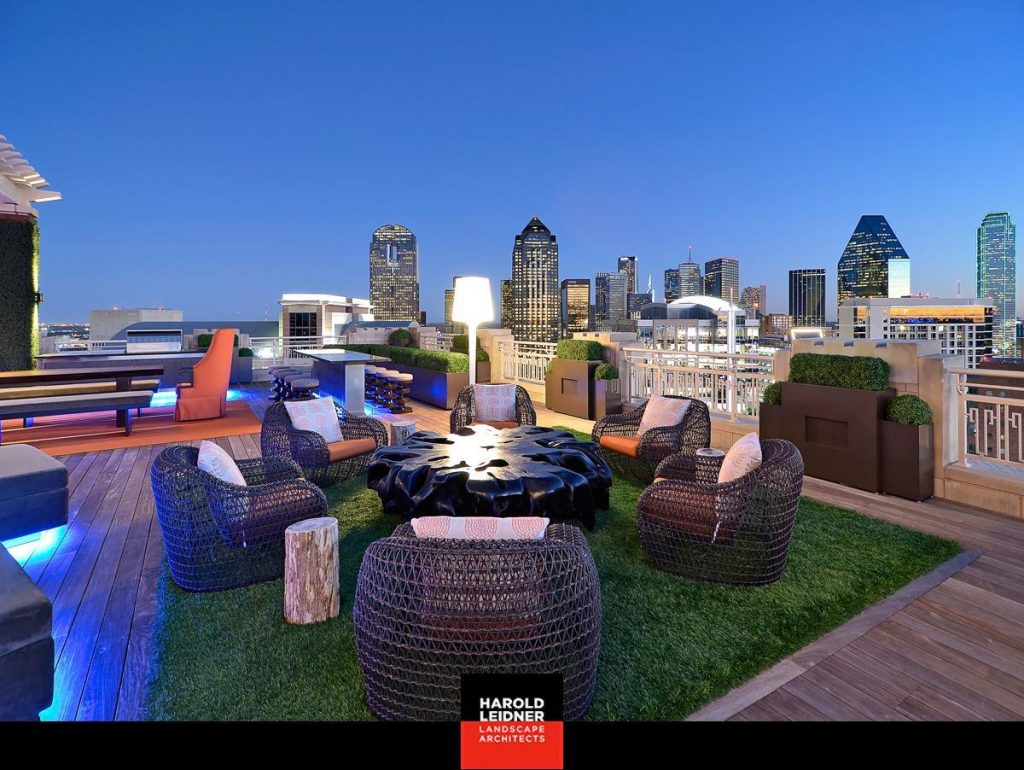 The Leidner firm was referred to the client by an architect. The client also has another home in the Dallas area, and Leidner worked on that project as well, which is where he met interior designer Sofia Joelsson, owner of the Miami Beach, Florida-based SOJO Designs, with whom he collaborated on the penthouse.

“The penthouse was very much built as a retreat and a place for entertainment, and she was obviously a big part of that,” Leidner says of Joelsson. “She’s worked on multiple homes for the client all over the country, but we worked on these two together.”

The situation with the Ritz Carlton property was such that Leidner had very little interaction with the client. The entire project was modeled in 3-D, it was presented to the client in that form, and Leidner says it was built off the 3-D modeling.

Along with his desire for dining and entertainment areas, Leidner says the client’s other wish was for plenty of “wow factor,” despite the fact that it was constructed in a very secure, very private environment.

As a result, the project includes what Leidner describes as “a very sophisticated cooking center.” And in another area is a high-end bar reminiscent of a nightclub scene.

The bar probably epitomizes both the level of the client’s wish list and the landscape architect’s efforts to give him what he wanted. As Leidner explains it, the wish was for a round bar with neon-type lighting.

Initially the client said he’d seen the neon bar on a trip to East Asia. However, when the bar proved difficult to build, further research turned up that the original inspiration had appeared in a magazine advertisement — and had been created using Photoshop in, at that.

“It was never built, but we pretty much replicated it from the photo,” Leidner says. “It was complicated to build, but it’s very cool, very unique, definitely a signature piece. It’s almost a piece of art in itself.”

As for finding the people to execute such a commission — bar included — Leidner’s firm has a construction manager on staff, and utilized its normal vendors.

“We have a tight group of people that work with our team on all our projects, whether it’s steel or wood or drainage or conduit or electrical,” he says. “We didn’t really go any further than the same people who build our courtyards, and they’re so good they didn’t have to rise to the occasion for this.” 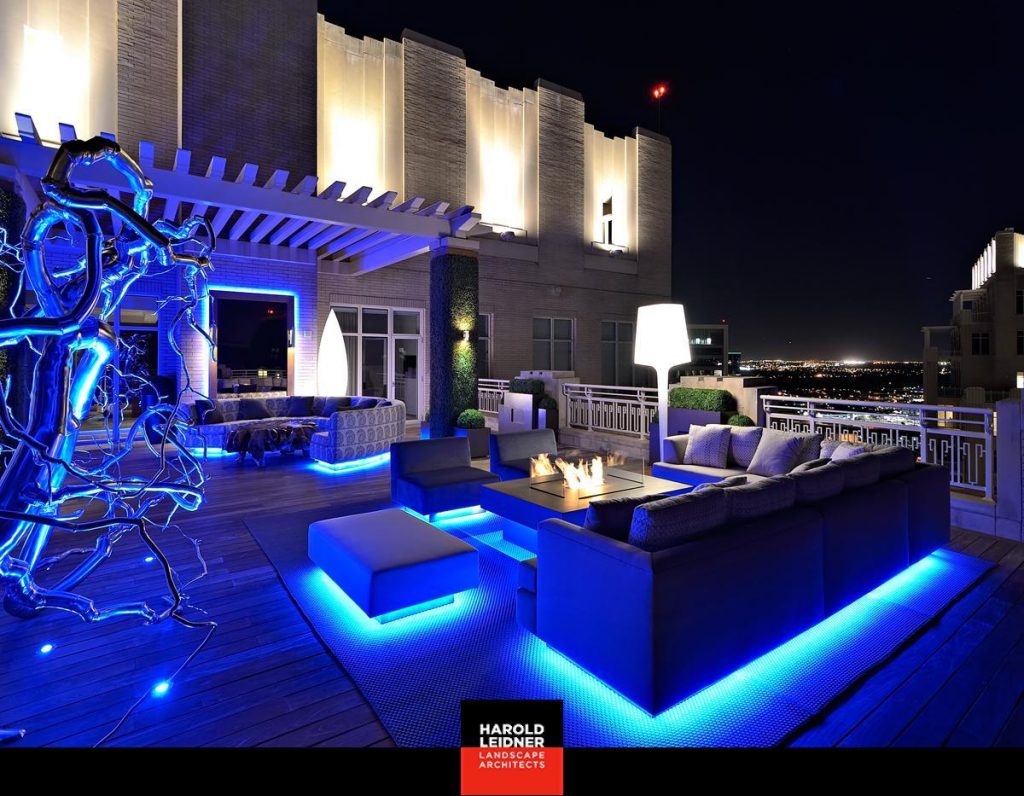 However, the number of challenges the project presented — beyond the bar — was formidable, starting with the weather conditions.

“There could be very extreme weather conditions on the 23rd floor,” says Leidner. “Sometimes it was spectacular, but at other times if could be miserably cold, miserably windy or miserably hot. It just depended on the time of day and the time of year you caught it.”

The wind alone caused Leidner to bring in an engineer to look at the project, and every element, including the pillows, had to be tethered to something. However, because the area is, according to the deed, a common area of the hotel, nothing could be permanently attached.

“It wasn’t just as simple as anchoring a chair to the deck,” he says. “There had to be a substructure that wasn’t anchored to the deck that the chair could be anchored to.” 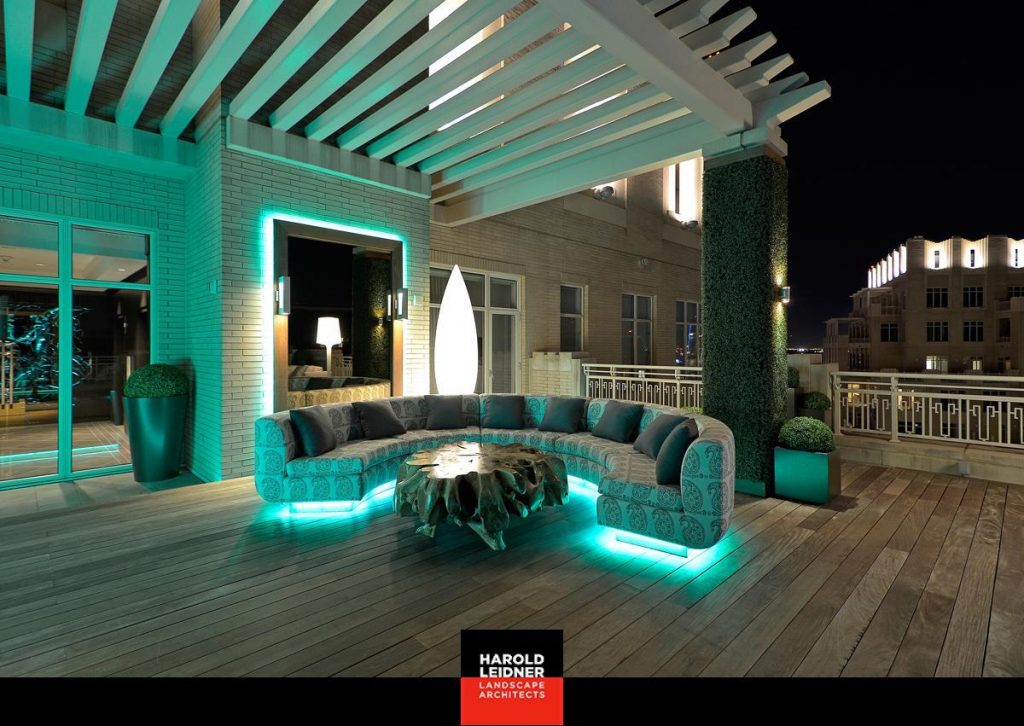 Another important restriction, especially for landscape: no water could be used.

“All the boxwoods are synthetics,” Leidner says. “All the grass is Conservation Grass, which is a synthetic grass product. All the planters, everything, was custom-made for the space.”

A further complication for those working on the project: there was absolutely no staging area available — and sometimes limited access to the freight elevator.

“There wasn’t any place to store or keep anything on the site,” says Leidner. “Some of the things — like the bar — we built elsewhere, disassembled and put it back together up there. A lot of the things that were complicated were assembled up there, but that slowed the process down.”

And, it was a slow process. Leidner says it took approximately 18 months from the start of the design work to final completion in 2009. Despite the fact that the client has since sold the property, Leidner says the job left him feeling proud.

One reason is the lighting system, which allowed the client to totally control the color of the lighting.

“It was a pretty sophisticated lighting program, although it’s a bit more mainstream now,” he says. “Even today it’s ahead of its time, although things are catching up with it.”

Even more, though, Leidner is proud of the project itself.

“I was born and raised in Dallas and every time I look at one of the images of it, it makes me proud to be in Dallas,” Leidner concludes. “Not only is it spectacular views in a spectacular city, but it was a challenging project in that I had a client who wanted something really spectacular and he allowed us the time and money and resources to fulfill that.

“I think he got what he wanted, and we delivered it.”

Next post How to Keep Hustling and Avoid Complacency