If you’ve ever wondered if practice really does make perfect, ask Joe Monello.

An entry for a different facility’s courtyard project in 2015 failed to garner a nod from the judges. Even with around 15 projects now under his belt, Monello says he continues to fine-tune every one.

Monello Landscape Industries does design, build and maintenance for both residential and commercial landscape projects. The maintenance side of the business first launched Monello into the nursing home and health care market. 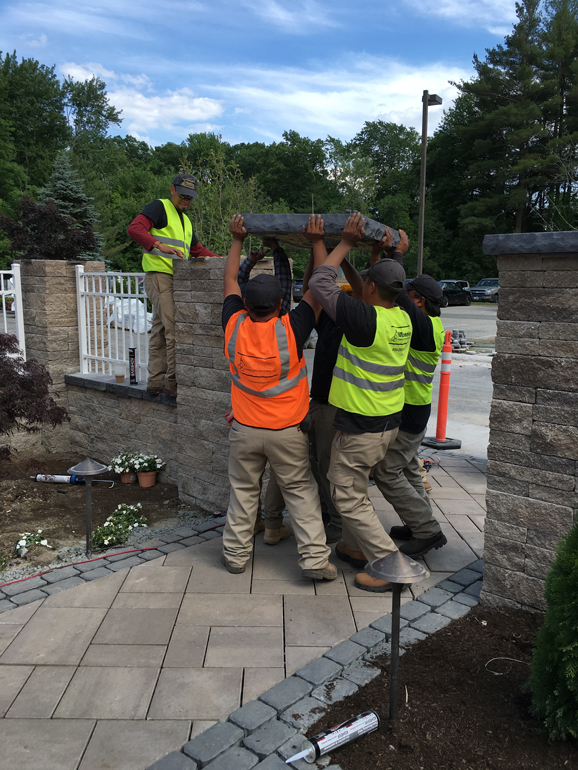 The client, CareOne LLC, is a Fort Lee, New Jersey-based owner of assisted- and senior-living facilities, and Monello was initially called in to do some paver maintenance on a couple patios at their facilities. The client also mentioned a new fountain feature that would work in one of their new areas.

“At the last minute, they asked if I could put a design together in two days to show what we could do for one of their courtyards,” Monello explains. “I said ‘Sure’ and put together a design with a pergola, a barbecue area for a grill, a sensory garden and a fountain,” he says.

“Then, they said I had two weeks to do the job before the big grand opening for the building,” Monello adds. “We worked pretty much from sunup to sundown and got a job that probably should have taken a month-and-a-half done in two weeks. They were impressed with that.”

Impressed enough that Monello was asked to design and build another courtyard where he put in bistro tables, two full kitchens, a sensory garden, more water features, lighting, television and audio.

“We came in on-time and on-budget and the company loved it,” Monello says. “They said, ‘This is our new standard for our courtyards.’”

Still, because these are – for the most part – retrofits, Monello adds that each one is truly different. For instance, recently he’s begun putting the CareOne logo in the pavers. He believes the Wilmington project also caught the judges’ eyes because of its use of a masonry wall.

“Rather than using fencing, we decided to use a hardscape exterior wall throughout the whole frontage,” he explains. “That gave it a really appealing look from the outside, and we thought it was a nice touch.”

He describes the two outdoor kitchens in the project as “really large” and notes they’re also done in masonry block with a veneer façade. The pavers and wall material are from Techo-Bloc, and the veneer is from E.P. Henry. 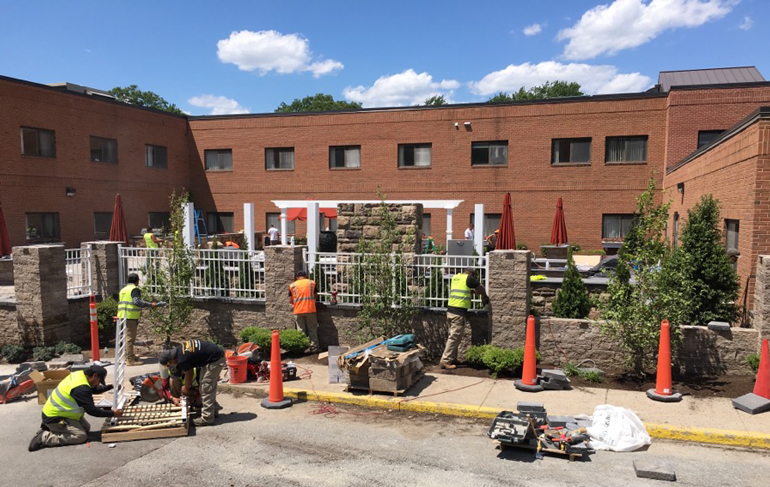 “The veneer is something we’ve used on several projects,” Monello says. “There’s also a lot of granite involved. A lot of the coping is granite and the countertops and table tops are what they call a leathered granite.”

Monello Landscape does its own lighting installation, and Monello says the entire project uses low-voltage fixtures – much of it tied into the hardscape – with an emphasis on soft lighting.

For the Wilmington prize-winner, Monello says the biggest challenge was easily the demolition and clearing of the site for the new installation. 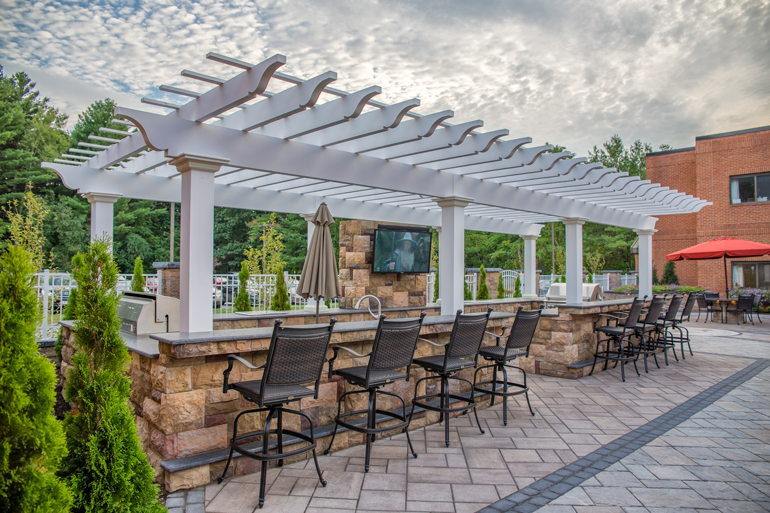 “There was a pretty large demo involved,” he says. “The space was used for a courtyard, but it was concrete and there were some drainage issues we had to work through. We had to excavate all the soil out to put our base material in.”

Further complicating matters, it was only the second such project the company had done in Massachusetts, so finding good local subcontractors with which to work on things such as hauling the old concrete from the site proved to be difficult.

Additionally, he says tying into the existing drainage system involved excavating into the parking lot to find an outlet to outsource runoff.

In all, the work took approximately two months, which Monello says is common for jobs of this size. Monello had anywhere from six to 15 crew members on the job site, with the lower number being the norm.

“Typically, day-to-day, we run a six-man crew,” he says. “Sometimes, it’s unavoidable that you have to put more men on the job to get things done. We’re very strict on deadlines, and we’ve been very good at hitting them.”

Because he and his company came from out of state for the project, Monello says he’s most proud of the relationships they were able to build with the CareOne officials responsible for construction at the Massachusetts facilities.

“We were coming in from New Jersey and we’re very proud that we went in as outsiders and came through for the company,” he says. ”We built up a bond and have continued to work on that as we did a total of five projects in Massachusetts this year.”

However, being the outsider also caused Monello to reevaluate how he handled such projects after the Wilmington courtyard was completed.

“I learned to use fewer subcontractors and more of my own people,” he says. “After this job, I made a company decision to use the fewest subcontractors we possibly can and do more in-house.”

He adds that the move not only gives the company more control, but because all his employees are certified with the Interlocking Concrete Paving Institute, the quality of the work is higher.

Monello says by attending the grand opening of the Wilmington facility courtyard, he also learned a valuable design lesson: he observed that the residents tended to gravitate to the shade under both the bistro table umbrellas and the pergolas.

“It’s really vital to protect these elderly people from the sun,” he says. “We’re putting in the pergolas depending on the angle of the sun to cast more shade for people, and just doing more with our designs to provide more and more shade.”