Not every residential and commercial property has a flat, square stretch of land to design and maintain. Slopes slink toward areas that don’t make the most sense logistically. Hillsides erupt in the middle of front yards. And let’s not forget other challenging conditions related to location that can impact landscapes, including properties that butt up against lakes or oceans or those that have challenges with erosion or drainage or unexpected items lurking beneath the soil.

Sure, no landscape is perfect, but that doesn’t mean a landscape designer can’t turn that space into one that is not only useable, but also equally aesthetically pleasing.

Designer Wickie Rowland was recently commissioned to tame an unmanageable hillside slope of pine and forsythia that plunged at a 45-degree angle into the back channel of Little Harbor on New Castle, an island off of the New Hampshire coast. This wind-swept and salt-sprayed hill is the highest point on the island, acting as its watershed. Her goal was to create a stunning, 3,600-square-foot garden space with a three-person crew within six weeks. 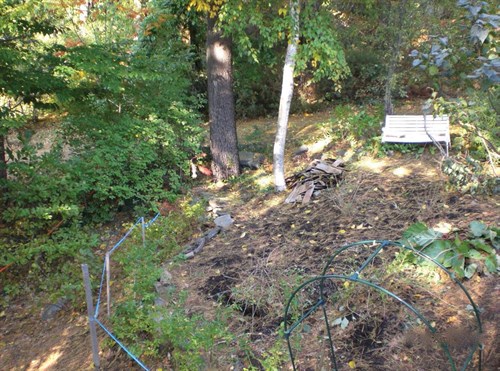 “The drainage challenges were immense, and access was extremely difficult,” Rowland says. “We were fortunate that we could use the neighbor’s driveway, the only space available that would accommodate the heavy machinery we needed, including a skid-steer loader, stump grinder, mini-excavator and dump truck.”

When Rowland lifted the top layer of wood chips and old topsoil, she uncovered a virtual treasure-trove of interesting landscaping elements, including rocky ledges, steps and boulders. But many large rocks and pesky stumps had to be removed. 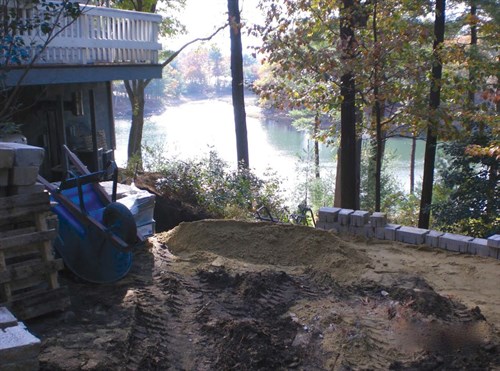 Rowland’s garden design included terraces, multiple layers of retaining walls and a custom-built decorative fence to ward off deer. More than half the work had to be done by hand. “As Murphy’s law would have it, anytime we started to prepare the footing for one of the retaining walls, there would be a large rock that would need digging out or a tree stump grinded down in order to continue,” she says.

Sand and fill were brought in and compacted so that a second layer of walls could be built. A larger than usual amount of compacted crushed stone in the wall footings was used to ensure the security of the walls and maximize drainage. A French drain was installed along the inside of the wall and then traveled about 20 feet down the hill.

A formal fruit garden included apple trees, elderberries, strawberries, grapevines and arctic kiwi. Now, Rowland is converting the fruit garden into a glowing “white garden,” inspired by Sissinghurst Castle in Kent, England. She is also introducing Klingstone, a polyurethane-based liquid that cures to strong polymers that permanently bind and stabilize soils and stones by essentially gluing them together. It is designed to eliminate erosion and enhance the effectiveness of drainage systems. 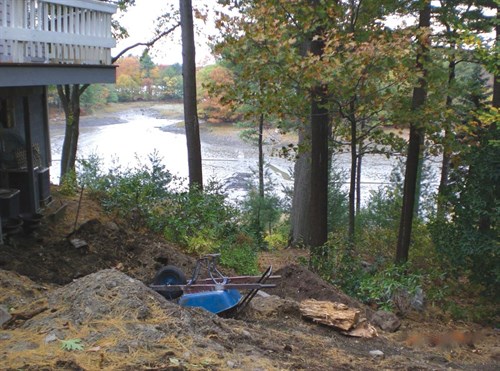 Most landscape designers agree that drainage is the No. 1 factor to consider when it comes to challenging terrain such as steep slopes.

“You can never think too much about drainage,” Rowland says. For her seaside slope project, her crew had to come back and fix a small area where the water had eroded some sand behind a portion of a wall. Don’t ever give up an opportunity to see a site in the rain, she advises. “Don’t change the initial consult date because it’s raining. Rather, use the rain as an opportunity to see what you may be up against. Use a diver’s tablet to take notes if you have to,” she says.

Drainage can be dealt with through culverts, bridges and ditches, explains Leah Arnason, senior parks development planner and landscape architect for the government of Alberta in Edmonton, Canada. “The water has to move from an undesirable location to a desirable location, and this is achieved by creating a high point and contour adjustment,” she says. 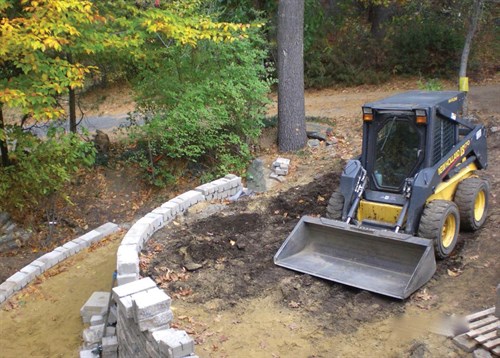 New Jersey-based landscape designer Susan Schlenger has learned that hillside landscaping takes ample creativity and knowledge to achieve both form and function. “The extent of the challenge depends on actually how steep of a slope we are talking about,” she says. “Sometimes a planting design alone will work, while in other situations terracing would be best. The maximum slope for hillside landscaping should be 3-to-1.”

Lawns can be a good hillside solution, Schlenger says. “Many times people think of plantings only when landscaping steep slopes,” she says. “Lawns are relatively easy to care for on slopes, with the steepest slope that can be mowed comfortably at 3-to-1, or 33 percent. Another way to approach the design is to plan on the area being mostly lawn, with planting beds as part of the picture. For example, there might be a curvilinear planting bed that goes along the top of the slope, continuing down the side, and then appearing along the bottom.” 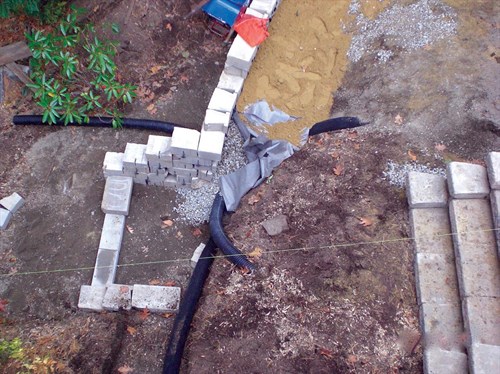 Use masses of plant types when landscaping steep slopes, Schlenger says. Choose five to seven or more of one kind for a striking plant display, and keep the taller ones at the top and lower plants toward the bottom, she recommends.

Steep slopes can be dry because of water traveling downward and not seeping into the ground. She suggests using drip irrigation and selecting plants that will tolerate the site. “Use plants that are somewhat drought-tolerant,” Schlenger says. “Watering can be a problem with steep-slope gardening. A sprinkler system helps tremendously, particularly if it is a large, sloped area.”

To keep clients content, Schlenger strives to minimize weeds in these areas. “Adding a thick layer of mulch, 3 inches deep, and planting the complete area with plant material will keep most weeds from emerging,” she says. “Using masses of ground cover, especially the faster-growing or aggressive ones, is a good idea.”

Stephen Roberts, a landscape architect based in Springfield, Massachusetts, has many steep slopes in his landscaping portfolio. He warns that building walls and patios on hills can be quite challenging, especially when hydraulic equipment cannot be used because of accessibility constraints. 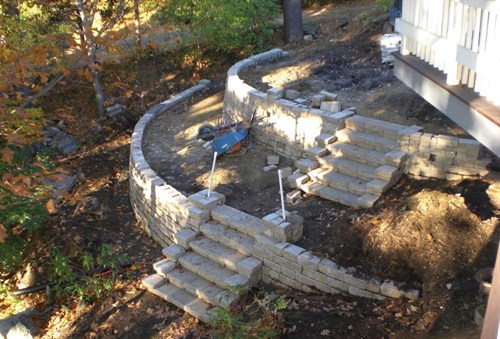 “The removal of displaced soils can be labor-intensive, but conveyor systems can be used to reduce the labor cost,” Roberts says. “Scaffolds can be deployed to give a working platform on the downhill side of a wall. This enables crews to have stable footing during construction. It’s also important to consult with engineers to examine the subsoils to ensure the soils being built on can handle the construction activities.”

All of these factors and more were considered when The Earthworks Group of Murrells Inlet, South Carolina, and Koth Consulting of Powhatan, Virginia, teamed up with Ohio-based Filtrexx International to restore a commercial property in Newport News, on Virginia’s coast. The landscape, a former landfill, featured a creek and a 20- to 40-foot slope with a 70 percent to near-vertical grade. After many years of heavy rains, the creek eroded portions of the landscape. The challenge was to stabilize a 300-foot-long section of the slope. 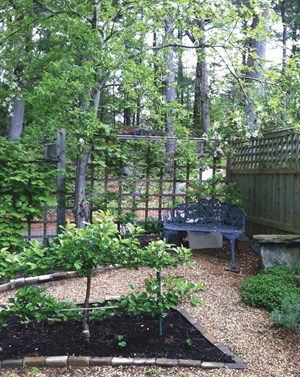 A dry work area had to be created by diverting the water flow upstream with an inflatable dam. Backhoe and loader equipment were used to shape the slope as needed. Geotextile blankets, gabions, riprap and a stabilizing Filtrexx LivingWall system were all installed.

Steep slopes and hillsides aren’t the only challenging types of terrain. Most of Kurt Schaus’ and Susan Powell’s landscaping projects involve flat terrain, yet they still face significant struggles with many of them.

“Whether you’re on a flat city lot or rolling, wide open, spacious lot in the country, controlling the water flow is a constant challenge,” Schaus says. The principal designer for Detroit-based R. Youngblood & Co. finds this to be the most overlooked problem in landscape design. “Landscape designers need to find a way to resolve the conflict of erosion, which will provide sustainability to the project, making the investment worth the effort.”

Terrain with subsurface water or underground springs is the most challenging that Powell, project manager, encounters in her work with the Philadelphia-based company Hollywood Landscaping. “These properties should probably have never been developed,” she says. “Sometimes I’m at a loss as to how to help my customers who are trying to alter Mother Nature too much.” Powell introduces water-tolerant plants, but the very nature of springs often has them moving from spot to spot—the path of least resistance.

“Customers don’t like springs popping up in the middle of their manicured yards where a bed is appropriate,” she adds. “I have had some success stories where we have installed a series of underground French drain-type systems, but more often than not, the spring water finds another way to get to the surface in a different place. Now the customer is upset with me, and they have wasted thousands of dollars.” 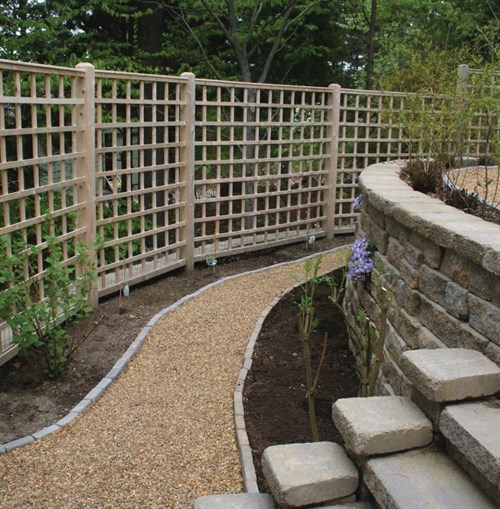 Landscape designers tackling oceanfront properties face many obstacles because of the challenging environment. Waves lashing out onto gardens eat away retaining walls, giving way to land loss. Sea salt and strong winds present problems to both plants and hardscapes. Steep cliffs and poor soils are all too familiar.

Anna Pollo, owner of Greek Villa Landscape Design & Property Management, which specializes in Mediterranean landscapes like those found on the West Coast, insists on building low, dry cement-based retaining walls for every oceanfront garden. She also finds that wind- and drought-tolerant plant selections “are getting better and better” and that installing a temporary drip watering system, especially on steep slopes, is a must. “After a couple of years, when the plants get established, you can roll up the system because the plants will get strong enough to survive without watering,” Pollo says.

Lakeshore properties make up Brad Smith’s top challenging terrains. A recent lakefront project, plagued by rain delays and staffing issues, was by far the most difficult he has ever faced as president of his Omaha, Nebraska, company, Heartland Gardens. His client wanted his backyard lake view to reflect the rugged Minnesota lake country where he grew up. To accomplish this, Smith moved in big boulders, incorporated limestone hardscaping and planted Northwoods-style evergreens and perennials. What he didn’t anticipate was the wet spring weather that arrived during the installation. 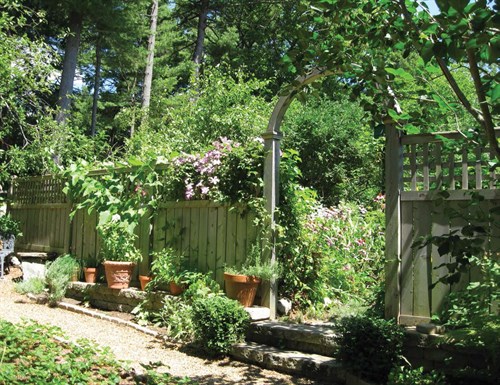 “I underestimated the challenges of driving and maneuvering machines on a sandy shore and how often they got stuck,” Smith says. “I also didn’t anticipate the water level of the lake changing as much as it did from excessive rains during the process. The level of the lake had risen to the point where the original dry beach was now under water, rendering it unusable for heavy equipment. In addition, the entire yard sloped downhill toward the lake. The rock quarry that we were to get the boulders from was under water for a good week or two.”

Smith was relieved when the project was finally completed. “The project turned out great in the end, but I probably wouldn’t be as eager to do it again,” he says. “There were too many variables with sand, water and rain to deal with coupled with a few cost overruns and time delays.”