Story Of A Landscape: Bringing New Purpose To A Small Backyard

Gaining access to this small backyard was challenging during the renovation process.

Sometimes, it’s the little things that set change in motion. For the Levinsons, it was looking out their newly remodeled second-story sunroom and realizing the backyard no longer served its purpose.

Some of it had to do with the tired groundcover and little-used playset. And, some of it came with the desire to add adult entertainment areas, as well.

Enter Todd Guilmette, owner of Marbleton, Georgia-based Unique Environmental Landscapes. Guilmette is no stranger to the neighborhood. The maintenance division of his company has clients in the area, and the previous year he’d done a remodel for the Levinsons’ next-door neighbors.

“They saw the work we did there, and it was an easy-follow-through with them,” he says.

He adds that the Levinsons’ desires were fairly modest.

“It was a cramped backyard that had very little usability,” Guilmette says. “The backyard was under a quarter-acre. They have a downstairs underdeck that went nowhere, and they were trying to get a little bit of flat area so it wouldn’t feel like when they came out of the basement everything fell away.”

Ultimately, they settled on incorporating a small hot tub, fire pit and seating area and – perhaps most importantly – achieving a sense of balance among those elements. 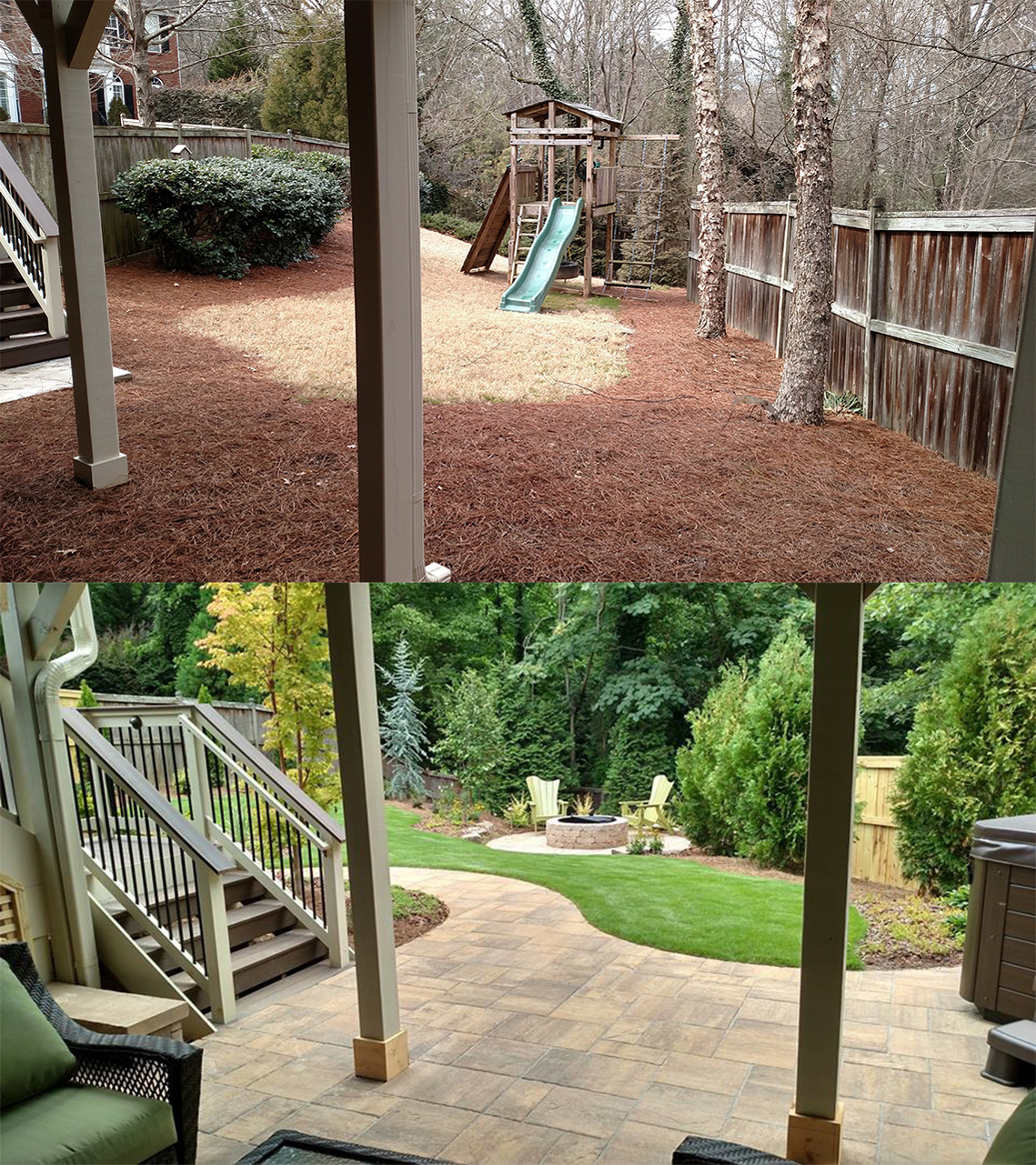 Guilmette began the project by actually adding space to the backyard. The property backs up on a greenspace, and he removed some unwanted vegetation that had spilled into the backyard, as well as existing plant material originally installed by the builder.

After that, he moved the fence.

“We took the existing fence down and reconfigured it,” Guilmette says. “By looking at the lot lines we had room to expand and create a little bit bigger area visually.”

The company also removed some River Birch trees he describes as messy. Through grading and filling, Unique lessened the slope, and while Guilmette says it still falls away, it’s less noticeable and easier to walk on.

Given the size of the backyard, he adds that access was by far the job’s biggest challenge. 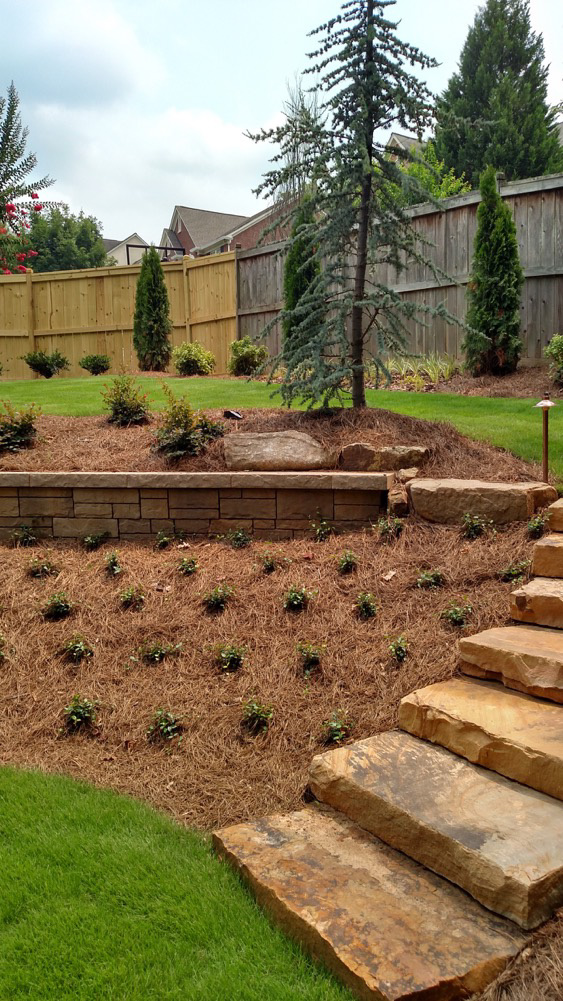 “On jobs like this, it’s almost always access,” he says. “We’re known for taking on projects that have limited and difficult access, but access makes a project which looks really simple really hard, and you have to think out every step of the job.”

The fill consisted of red Georgia clay topped with the company’s own mix of topsoil which incorporates compost from the maintenance division. And, the lower area is flat enough that the playset could be installed there if desired.

Guilmette also addressed drainage by piping discharge from the home’s downspouts into four-inch solid pipes that drain it to the back lot-line and into a small wetland area in the greenspace.

The underdeck area has been finished with flagstones and a table seating area, as well as the hot tub. Guilmette explains the above-ground hot tub is against the fence area to move it out of the sight line of someone walking into the backyard.

“We did a lot of softscape around the hot tub,” he says. “It’s sitting on a pad and I tried to bring plant material around it so it would soften the look. I used Podocarpus and other evergreens as well as ground cover to help it blend in so it doesn’t look like it was plopped there by the side of the underdeck.” 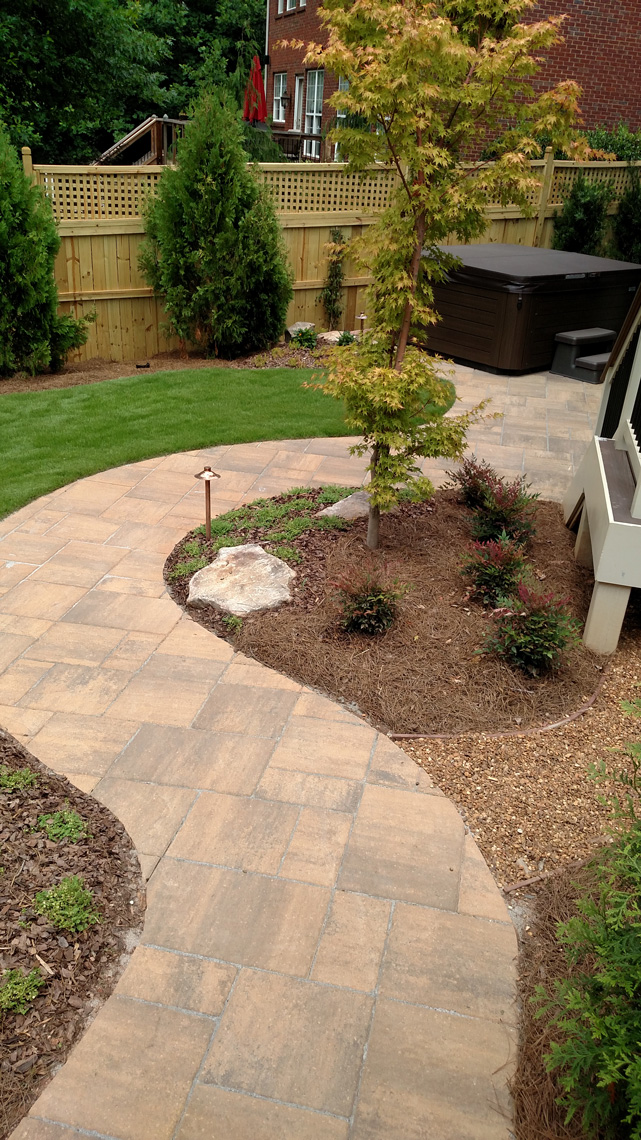 Unique also moved the configuration of the steps coming down from the sunroom to give it a more natural flow into the patio and out to a side gate. Guilmette adds that the home has a bar in the basement off the patio, and the area is designed mainly for gathering and light snacking. A grill is part of the upstairs deck.

Part way down the hill is a second seating area with a finished area large enough for a handful of chairs and a wood-burning fire pit. Both the fire pit and the retaining wall below the seating area are made from modular block products from Belgard.

“That was a cost consideration,” says Guilmette. “These are great alternatives but a little less expensive than natural stone and they provide both functionality and a finished look.”

Along with natural boulders for visual interest, the steps down to the planting area below the retaining wall are Crab Orchard cut stone measuring 3 inches by 18 inches.

“They’re very durable and when you’re dealing with sloped areas it’s a quicker way to do a step instead of using a masonry product,” says Guilmette. “It takes equipment to put them in, but they’re really versatile. We use them quite often in our projects to transition between areas.” 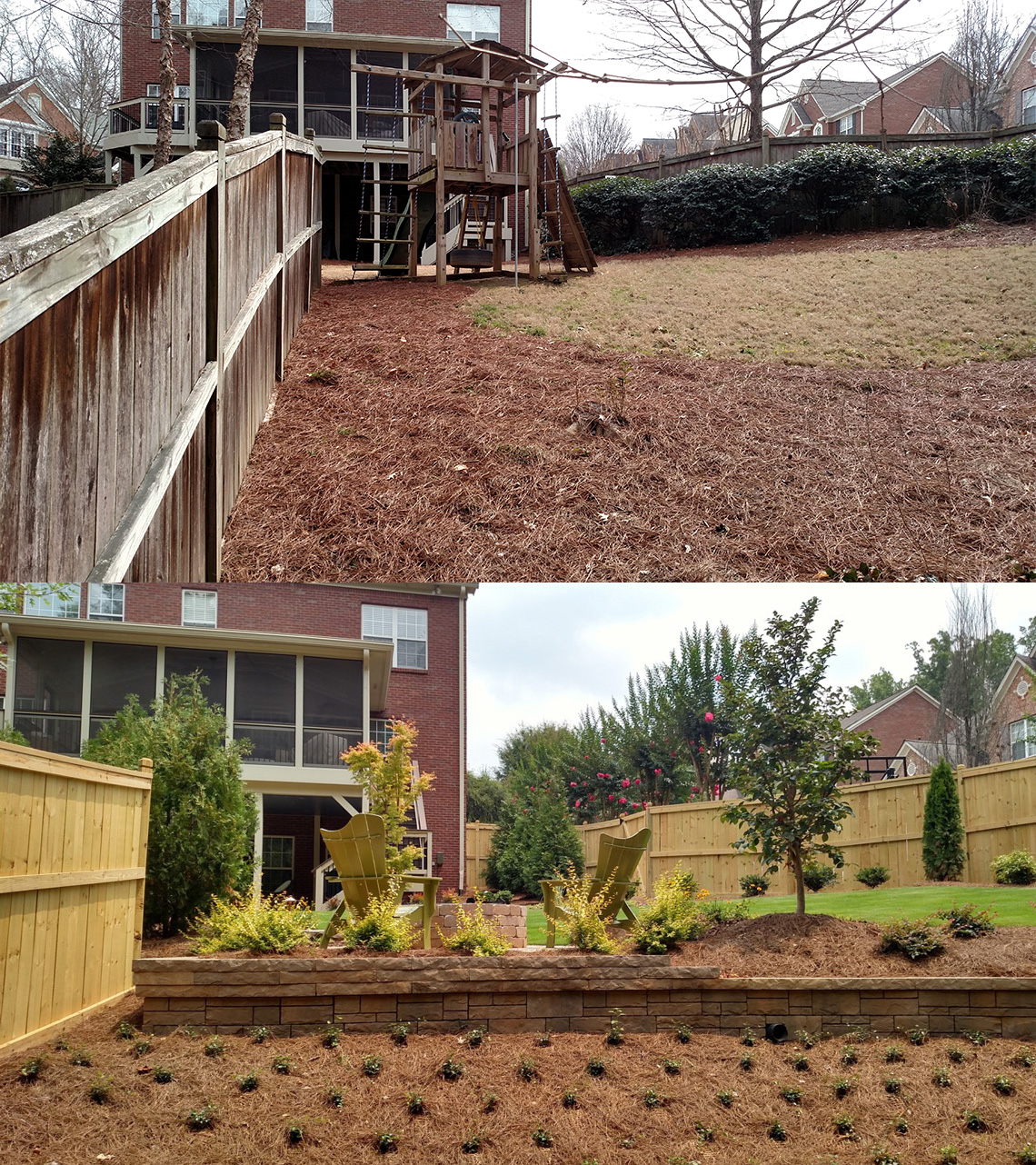 Much of Guilmette’s plant palette emphasizes four-season color. Among his choices: Kaleidoscope Abelia – which he selected for the eye-catching yellow color – Loropetalum, Goshiki Osmanthus, and some traditional perennials such as Shasta Daisy, Black-eyed Susan and Coneflower. He also planted a Coral Bark Japanese Maple, and – for the lower seating area – Blue Atlas Cedar.

“First, I go for texture and color of foliage,” he explains. “Then, I try to find plants that will also flower, so you’ve got consistency and seasonal change.”

His favorite feature for this job is the Blue Atlas Cedar.

“It’s a focal point,” he says. “You’re between two fences with a shotgun to the back. To me, it felt boxed in. The Blue Atlas Cedar pulled in some height and made the area feel a little more specious and less-linear and provided a focal point.”

The cedar is also a recipient of some of the night-lighting done in the backyard.

“It’s a soft light that illuminates it,” Guilmette says. “With the lighting, we try to bring depth to the landscape, so when you’re sitting out there, the lawn looks as full and deep as it is in the daytime.”

In total, the job took about five weeks, with anywhere from three to four crew members on the site at one time. 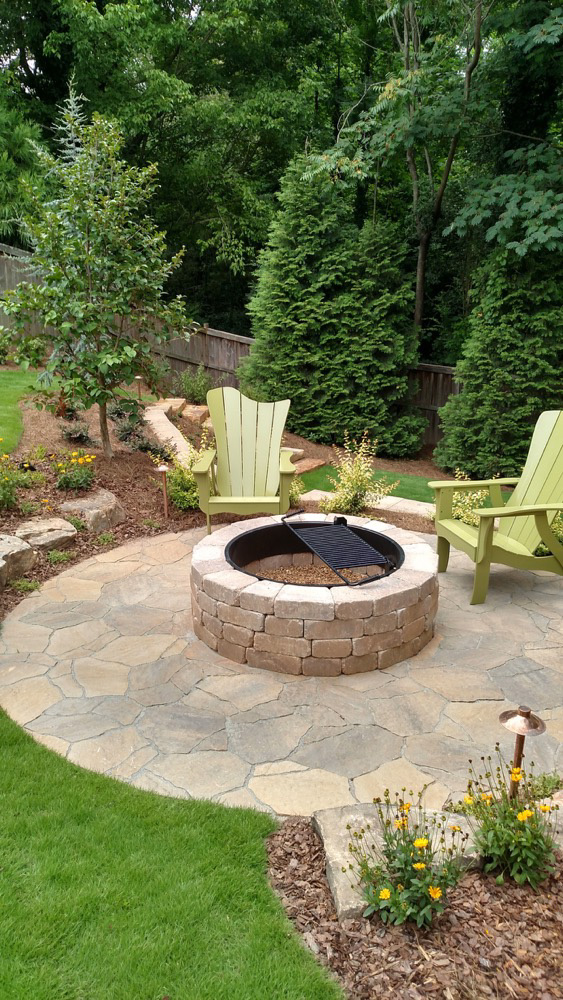 Not surprisingly, Guilmette says there are several things that make him proud of this project above and beyond the award of distinction it received from the Georgia Urban Ag Council for a residential design/build/install under $50,000.

“A lot of it is maximizing the space and getting the client to be awed at the end,” he says. “Many of them say, ‘I never saw this space back here.’ That’s really our goal, to show people how to maximize space and create areas, and I also like the texture and flow of the back area. The design invites you into the backyard.”

In this case, the Levinsons were sufficiently pleased with their project that Unique is now handling the renovation of a landscape at another home they also own.

As for what he learned from his job, Guilmette says the job also reiterated to him the importance of knowing what’s below the ground on a site — in this case a sewage easement in the back.

“It did impact the design and what I could and couldn’t do back there,” he says. “That’s a constant with designing: the need to understand the space. You think you’ve got a big open space and you find out about drainage or that it’s a septic field, and that will impact the design.”