Stormwater system and pavilions were installed at Canal Park.

One of the first parks built as part of Washington, D.C.’s Anacostia Waterfront Initiative, Canal Park presents a model of sustainability, a social gathering place and an economic trigger for the surrounding neighborhood.

Located on 3 acres of a former parking lot for district school buses, this three-block-long park is sited along the historic former Washington Canal system. 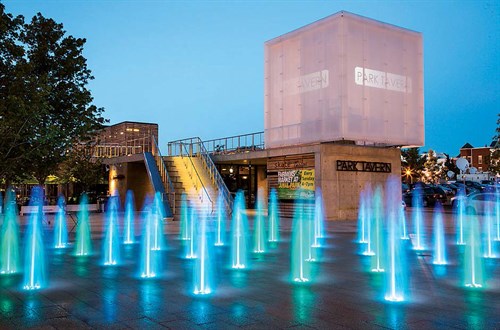 Inspired by the site’s waterfront heritage, the design created by OLIN, a landscape architecture, urban design and planning firm, evokes the history of the space with a linear rain garden and three pavilions reminiscent of floating barges that were once common in the canal. The rain garden functions as an integrated stormwater system that is estimated to save the city 1.5 million gallons of potable water per year. Stormwater is captured, treated on-site, and re-used for irrigation, building use and interactive fountains.

Collaborating with OLIN, STUDIOS Architecture designed a 9,000-square foot pavilion to host a café and dining area, as well as utilities that support the park and ice rink. Twenty-eight geothermal wells beneath the ice rink provide efficient energy supply for utilities. A second pavilion serves as a stage in the middle of the park, while a third offers storage for park amenities. Each city block features a David Hess sculpture. 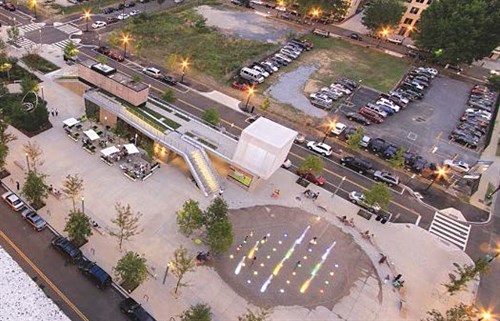 The many features of Canal Park in Washington, D.C.

Canal Park was named as one of six finalist projects in 2015 for the Urban Land Institute‘s Urban Space Award competition.

Editor’s note: This article was originally published in August 2015 and has been updated.