An adult European chafer beetle pictured next to a Japanese beetle. Photo from MDA.

The European chafer beetle (Amphimallon majale), an insect that can cause major damage to turfgrass, has been found for the first time in Minnesota this week.

A resident of south Minneapolis noticed large swarms of beetles in his/her yard at dusk and reported the find to a University of Minnesota Extension entomologist who suspected the beetles were European chafers. The Minnesota Department of Agriculture (MDA) then worked with the United States Department of Agriculture (USDA) to confirm the identity of the beetle, which had never been found in Minnesota before.

The European chafer beetle was discovered in the U.S. in 1940 in New York state and is currently found in the northeastern U. S., as well as Michigan and Wisconsin.

Unfortunately, the grub of the European chafer can cause more damage to turf than Japanese beetles because it spends a longer portion of the summer feeding on turf. Fortunately, since adults don’t eat, they don’t defoliate other plants like Japanese beetles. According to MDA, home lawns, golf courses, and turf growers could be significantly impacted if the European chafer beetle becomes established in Minnesota.

The adult insects are about a half-inch long and tannish in color. They are similar to the “June bugs” commonly found in Minnesota in early summer, but are generally a bit smaller and lighter in color. The beetles emerge from the soil between mid-June and early July and adults are active on warm evenings for several hours just before and after sunset. 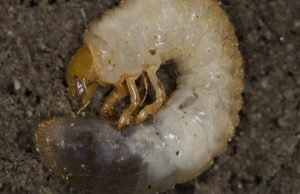 Grub of a European chafer beetle. Photo from MDA.

Most European chafer beetles have one generation per year, but a small proportion of the population may require two years to complete development. Eggs are laid 2″ to 4″ below the soil surface and hatch in early August. Larvae feed on the roots of turf. Grubs overwinter just below frozen soil and return to the surface as soon as the ground thaws. When the grubs are ready to pupate in late spring to early summer, the grubs will again descend lower in the soil. The white grubs can range from ¼” to 1″ long with a dark brown head and noticeable legs.

Minnesotans are asked to report suspected European chafers to the MDA’s Arrest the Pest line at arrest.the.pest@state.mn.us or 1-888-545-6684. Before making a report, please capture the insect, take a picture, and put the insect in a container or plastic bag and place it in the freezer. The MDA will contact you if the specimen is needed for confirmation. More information on the European chafer can be found here.

Want to talk with fellow lawn care and landscape professionals about Pesticides? Join the discussion in the forum at www.expired-link.com.