Preemergence Herbicide Use for Lawn Care

Spring is a time to focus on control of summer annual weeds such as crabgrass (Digitaria spp.) and goosegrass (Eleusine indica). These species complete their life cycle in one year, germinating from seed in spring, growing throughout summer, and setting seed in fall. If left uncontrolled, both crabgrass and goosegrass can reduce the aesthetic and functional quality of warm- and cool-season turf lawns.

There are two keys to effectively controlling summer annual weeds with preemergence herbicides. First, be sure to apply these materials before weeds have emerged from the soil. These herbicides do not prevent weed seed germination; rather, they prevent germinated seedlings from developing into mature plants.

Considering that the time frame between germination and emergence can be quite short, it is often recommended that these herbicides be applied once soil temperatures are favorable for crabgrass seed germination. Lawn care professionals should make their first preemergence herbicide application as soon as soil temperatures (at approximately 2 inches) reach at least 55 degrees Fahrenheit for a minimum of three days in spring.

Click photo to enlarge.
Goosegrass is a widespread species that tolerates a broad range of environmental conditions, but does not survive frost.

Split (also referred to as sequential) application programs of preemergence herbicides tend to provide more consistent control of summer annual weeds throughout a growing season. These programs typically apply the total amount of active ingredient for the season in two applications spaced eight to 10 weeks apart. A single application in spring for preemergence control of crabgrass will slowly be broken down by soil microbial activity over the course of a summer, often leading to crabgrass breakthrough by fall. Split application programs tend to provide a longer period of control, and will provide control of species that germinate later in the year than crabgrass (e.g., goosegrass, etc.).

Research conducted at the University of Tennessee in 2012 evaluated the effects of mowing height on the efficacy of single and split applications of preemergence herbicides for crabgrass control. A total of six different herbicides were evaluated.

Click photo to enlarge.
Foresythia plants in bloom indicate when soil temperatures are favorable for crabgrass germination and when you should apply a preemergence herbicide.

While this experiment will be repeated again in 2013, these preliminary results indicate that split application regimes provide better control than single applications at low (.6 inch) heights of cut. Additionally, increasing mowing height can improve the efficacy of preemergence herbicides for crabgrass control. Increases to 2 inches may reduce the need for split application programs altogether; however, this height of cut may not be acceptable in all situations. 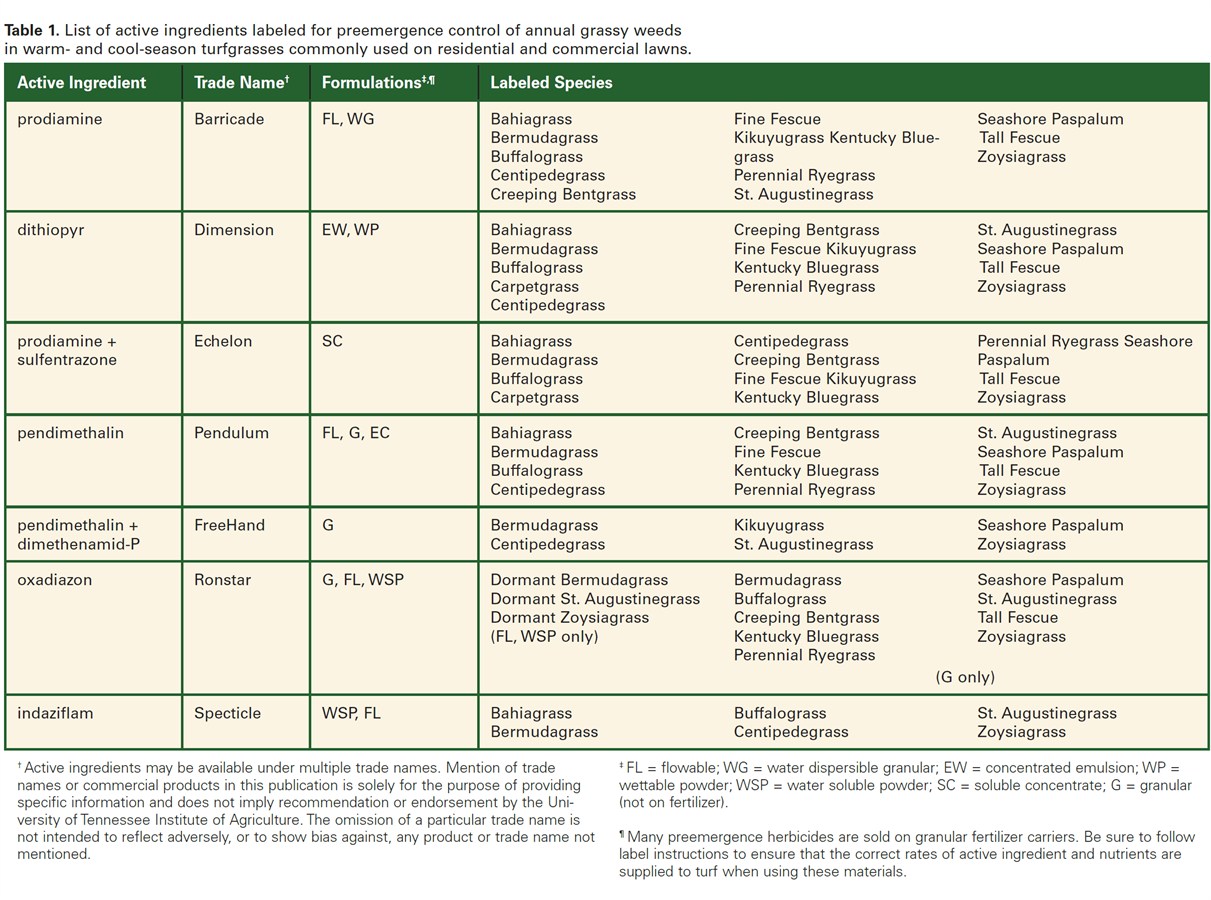 It is well documented that many of the preemergence herbicides used to control annual grassy weeds can inhibit bermudagrass root growth. Reductions in root growth in the uppermost portion of the soil profile could potentially compromise bermudagrass traffic tolerance and recovery, thus rendering the benefits of effective weed control moot.

Research was conducted at the University of Tennessee Center for Athletic Field Safety during 2009 and 2010, evaluating the effects of four preemergence herbicides on Tifway hybrid bermudagrass traffic tolerance and recovery 1.

Over the course of the two-year study, no differences in smooth crabgrass (Digitaria ischaemum) control were detected among herbicide treatments after being subjected to athletic field traffic in spring; control measured 95 to 99 percent by five months after treatment. Moreover, no differences in Tifway traffic tolerance or recovery were reported in either year. We hypothesized that this response was due to Tifway recovering predominately from belowground rhizomes rather than stolons.

Numerous preemergence herbicides are available for controlling annual grassy weeds in warm- and cool-season turf. Always refer to the product label for specific information on proper use, tank-mixing compatibility and turfgrass tolerance. Mention of trade names or commercial products in this publication is solely for the purpose of providing specific information and does not imply recommendation or endorsement by the University of Tennessee Institute of Agriculture. For more information on turfgrass weed control, visit the University of Tennessee’s turfgrass weed science website.

Editor’s note: This post was originally published in the February 2013 issue of Turf and has been updated for accuracy.