Through the Heart of Texas

There's another Colorado River, and it's vital to the Texas landscape industry.

Central Texas is “in one continuing drought interrupted by floods,” quips Nora Mullarkey, a manager with the Lower Colorado River Authority (LCRA). No, not that Colorado River, the one that carved the Grand Canyon. Mullarkey manages conservation and water contracts for the Texas Colorado, specifically the lower portion of that river, the section from approximately mid-state to its mouth at Matagorda Bay at the Gulf of Mexico.

Mullarkey’s observation about Texas is spot on for Texas, given that after seven years of a harrowing drought, this past spring’s storms delivered the wettest May ever recorded in the state. The drenching rains caused considerable flooding, but they also replenished many of the man-made reservoirs and lakes positioned along the Colorado. This past July 30, the state’s reservoirs were 84.6 percent full compared to 66.7 percent full the same date in 2014, according to the Texas Water Development Board.

Texans in the central and western parts of the state generally expect (and get) dry weather—sometimes long extended periods of drought. But conditions can vary dramatically over the state’s sprawling 270,000 square miles.

Waters of the Colorado River are vitally important to the state’s economy and its future growth—droughts or not. The Colorado sustains farming, electric power generation, and it is indispensable to the cities it nourishes along its twisting 900-mile route through the state’s heart. The river starts hesitantly as a small spring in the high Texas plains, a short drive (in Texas terms anyway) south of Lubbock. Initially little more than a stream, the Colorado sluggishly makes it way through high prairie picking up tributaries until it eventually becomes a river to be reckoned with, cutting a path through the scenic Texas Hill Country as it makes its way to and through Austin, the state capital.

Austin is one of the 10 fastest-growing large cities in the U.S. From 2000 to 2010, the Austin metropolitan region grew 37 percent to 1.65 million people. The region’s growth is expected to continue with the population for the same area projected to be about 2.8 million by 2030. 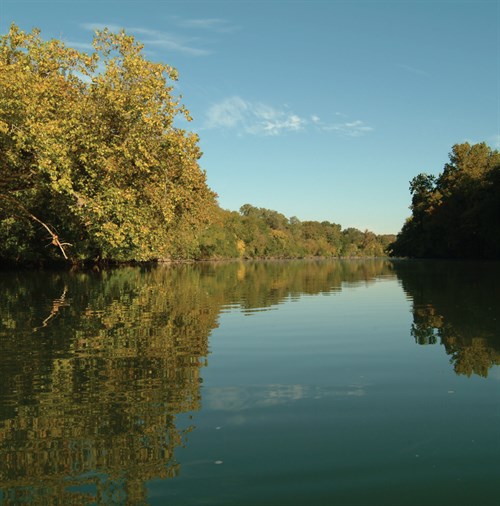 Starting as a small stream south of Lubbock, the Colorado River grows in size and provides central Texas with water for industry, energy, irrigation and cities, such as Austin, the state capital.

Austin comprises one leg of the high-growth “Texas Triangle” that extends from Dallas-Fort Worth down to Austin-San Antonio then northeast to Houston-Galveston. Forbes magazine reported in 2012 that the state contained five of the 20 fastest growing large cities in the U.S. Texas remains the fastest-growing state in the U.S. It is predicted to grow 82 percent in the next 50 years, say experts.

As its population grows, so too does the need for housing, industry and greater demands on energy—all of which require water. More water. It is projected that by the end of this year, Texas will have only about 85 percent of the water it needs. This concerns planners and water authorities, and, given the severity of the recent multi-year drought, the public is more aware of the issue, also.

In 2013, Texas voters approved a $2 billion draft from the state’s savings account to provide public entities with low-cost loans for water supply and conservation projects. The Texas Water Development Board this past July 23 approved $3.9 billion in loans ($1 billion this year) for 32 projects spread over 10 years. Texas is serious about providing water for its continued growth. It’s also serious about conservation as one-fifth of the $2 billion is being set aside for conservation and reuse projects.

Obviously, the cost of building and improving infrastructure, including new lakes and reservoirs, to ensure the state continues to meet its water needs is going to be huge. Conservation is much less expensive, a course that water authorities are pursuing aggressively.

“Whether we have droughts or we don’t have droughts, I think we should recognize that we’re going to have to serve more and more people with water,” says Mullarkey in a recent webinar sponsored by the Southern Risk Management Education Center and the Texas Nursery & Landscape Association. More people mean more ornamentals and turfgrass. Homeowners are not going to give up their landscapes, including their lawns.

“Looking at it from a utility planning perspective for the future, 80 percent of new homes are installing automatic sprinkler systems,” she says. The challenge then becomes educating homeowners about how to irrigate more efficiently so that they can have attractive landscapes, including lawns where they are appropriate.

“There is recognition that turf is appropriate, especially to play on. But, you don’t need it just to mow it,” says Mullarkey—a sentiment shared by water authorities anywhere in the U.S. where fresh water resources are being stressed.

Mullarkey says everyone in the professional green industry plays a vital role in not only offering water-conserving plant material, landscapes and practices, but also educating the public on the need to irrigate efficiently so they can continue to enjoy green, life-enhancing landscapes. “Be your customers’ water conservation experts,” stresses Mullarkey, adding that property owners can have nice landscapes even in the face of twice-a-week irrigation restrictions and other stringent water-conservation regulations.

“Austin, Dallas and other large cities now have permanent water schedules, twice a week,” says Mullarkey. “We’re finding that if you have efficient irrigation and good soils, that’s probably OK.”

As of the writing of this report in mid-summer, no region of Texas reported drought conditions. The spring’s heavy rains lit up the Hill Country with incredible displays of some of the 5,000 different wildflowers found in the state. The spring-blooming Texas bluebonnets and Indian paintbrush have had their moment on the stage, and the fall is now bringing hillsides awash in sunflowers, sumacs, scarlet sage and prairie lilies.

But, as just about everyone in Texas has learned, the next drought (or flood) can be just around the corner, and water authorities know they must be ready for either eventually.