Green Animals Topiary Garden a treat for the eyes

Topiary comes from the Latin word “topiarus.” Strictly translated it means “landscape gardener.” Since these folks tended these living sculptures, the plants became known as “topiaries.” Eventually, topiary took on the meaning of the art of clipping evergreen plant material into geometric patterns and shapes.

European royalty and religious monks most often created these topiaries. They were among the few people of that era who had the time, money and patience to build and tend to these gardens. This is not the case for Green Animals Topiary Garden in Rhode Island. It is one of the nation’s most famous, oldest and most northern topiaries. Joseph Carreiro, superintendent of the property from 1905 to 1945, introduced and tended the topiary from the turn-of-the-century until his death. George Mendonca, his son-in-law, continued the tradition and served as superintendent of the gardens until 1985. 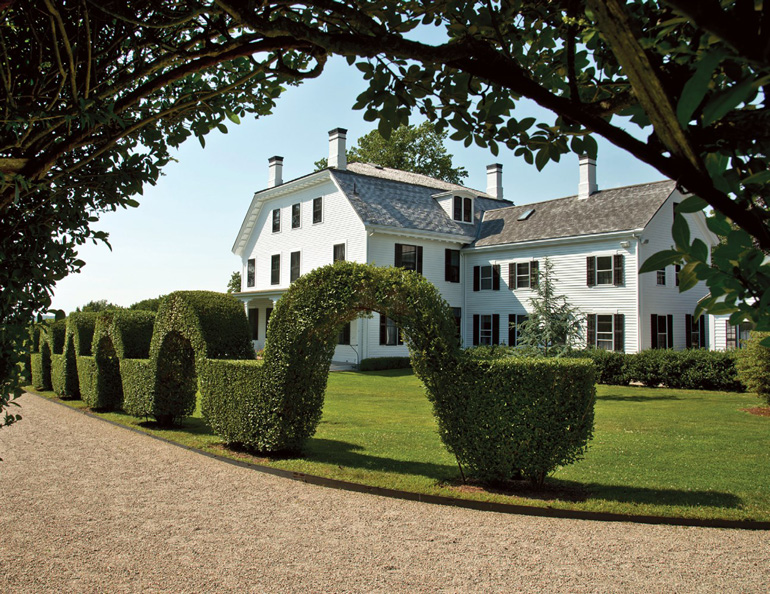 Stylishly shaped topiaries frame The Brayton House, a Victorian summer residence with classic white clapboard. It was built in the mid-19th century and contains the original family furnishings along with an antique toy collection. Photo: The Preservation Society of Newport County

The small country estate, located on 7 acres, overlooks the picturesque Narragansett Bay in Portsmouth, Rhode Island, was purchased originally in the 1870s by Thomas E. Brayton, treasurer of the Union Cotton Manufacturing Co. During the Civil War, this outfitter supplied most of the uniforms for the Yankee soldiers. Brayton’s daughter Alice made the estate her permanent residence in 1939, and named it “Green Animals.” She bestowed it to The Preservation Society of Newport County upon her death in 1972.

Forty years after Alice’s death, The Preservation Society of Newport County continues to maintain the diversity of her whimsical topiary gardens and surrounding formal and vegetable gardens, just on a smaller scale. Every summer it welcomes more than 12,000 visitors.

More than 80 pieces of topiary are on display. They include 21 animals and birds and more than 59 other geometric figures and ornamental designs. All are sculpted from California privet, yew and English boxwood. In addition, there’s a Victorian house on the grounds with original furnishings and a collection of antique toys with a greenhouse; expansive lawn; flower, vegetable and herb gardens; fruit orchards and vineyards; and a goldfish pond. 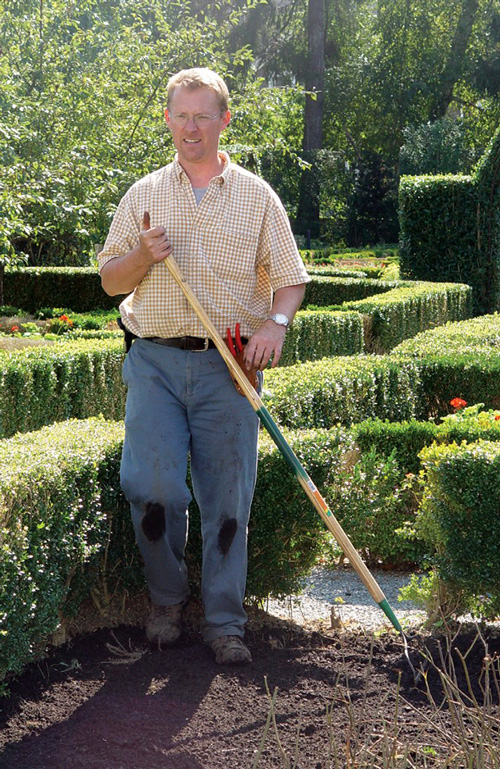 Jim Donahue is responsible for the day-to-day operations of Green Animals. He has been the horticulturist for the Preservation Society of Newport County there since 2004.

Donahue learned, researching old photographs and writings, that the original landscape was pasture with extensive food production including a pumpkin patch and squash fields. It also had fruit trees, figs, blueberries, rhubarb, asparagus, currants and gooseberries.

“I would call the landscape a mixed Portuguese style. That is it was defined by a heavily mixed lush assortment of fruit, flowers and vegetables,” he says.

Donahue is proud of the ancient massive purple-leafed European copper beach, the stand of Damask roses dating back to the 1860s and the Concord grape arbor dating back to 1900. (Did you know that the Concord grape is one of only three fruits native to the United States? The other two are cranberries and blueberries.) The property was an ever-evolving country retreat for two people with no formal master plan.

“Unlike other historic gardens, Green Animals has had excellent documentation from a select few individuals who have been involved in its development,” says Donahue. “So, when we take on renovation efforts, we are confident about its authenticity.” 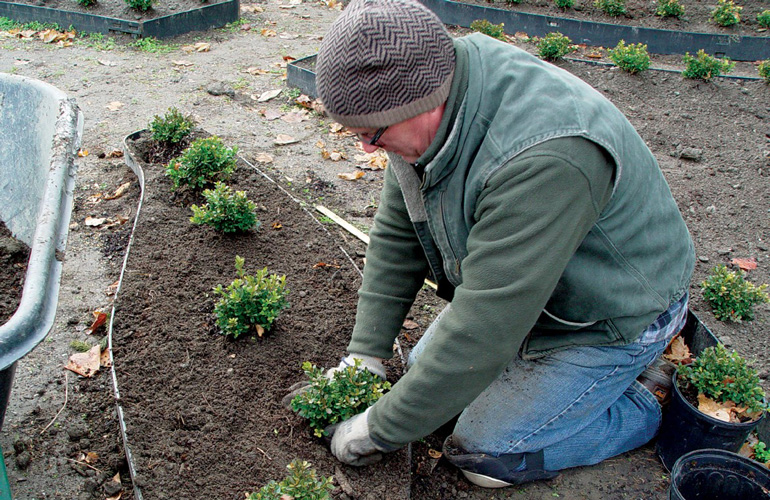 Jim Donahue plants newer boxwood cultivars, such as Morris Midget and Justin Brouwers, that are better able to resist pests and diseases, and will be easier to maintain. Photo: The Preservation Society of Newport County

In recent years, renovation efforts around Green Animals have been quite prolific.

“Much of our topiary boxwood is old and needs to be replaced,” says Donahue. “The choice of boxwood varieties was driven, most likely, by what plants could be propagated easily from cuttings, or traded with other estate gardeners. Carriero brought California Privet cuttings to the farm from the Azores in 1901. From photos, we also know they were fully grown by 1920.”

Donahue’s crew is consists of one other full-time gardener, Eugene Platt, who also trims the topiary. The privet topiaries are sheared every two to three weeks during the growing season; the topiary yew, such as the teddy bears, need be trimmed only twice a year; and the extensive boxwood hedges get deadwooded during the winter months and sheared heavily in early summer. In the growing season, Donahue takes on three additional workers and a generous handful of part-time community volunteers. 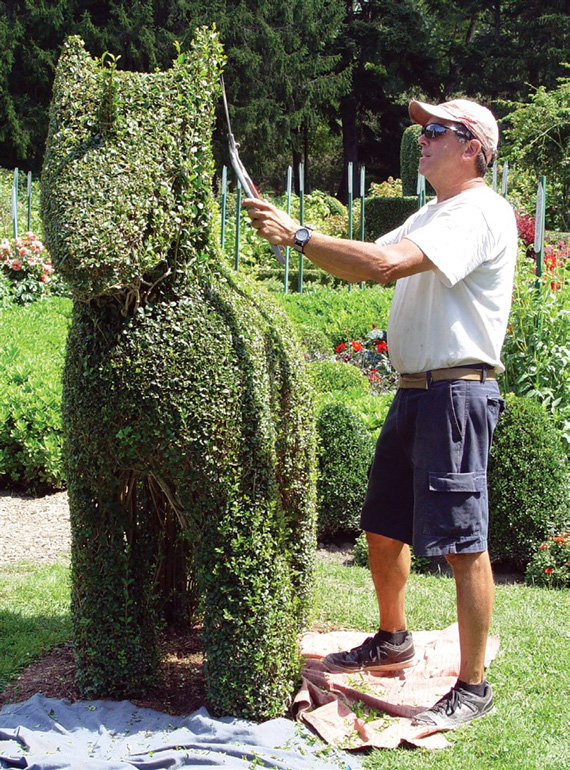 The renovation of the formal gardens is Donahue’s biggest challenge.

“We have to be really careful about what we do there. It’s where we feature the high-profile circus animals, including the camel, giraffe and lion,” he says.

The renovation has included stripping out and replanting all the old flowerbeds and introducing new irrigation and landscape lighting systems. “We now have an extensive collection of Dahlias,” says Donahue. “At last count we had around 125 varieties of all types and classes.”

In addition, Donahue developed a plant container program around the Victorian house and along the major garden pathways. “Since we’re a topiary garden we try to emphasize trained standards grown from coleus, flowering maple and even geraniums,” he says.

Beyond maintaining the formal gardens, there are also 4 acres of lush, rolling lawn descending to the water that visitors like to use for picnicking and recreation. The lawn consists of perennial rye divided into smaller areas by gravel paths.

“The original property did not have much lawn because everything was in fruit and vegetable production,” explains Donahue. In addition to a few push mowers, the crew still uses a classic dark green vintage Locke power lawnmower estimated to be at least 50 years old that still cuts beautifully.

“The lawn is kept presentable, but it’s not golf course quality,” explains Donahue. “We use a very small amount of chemicals, organic fertilizers and a crabgrass preventative. We topdress with loam and reseed in spring and fall, as needed, and dethatch areas that become spongy.” All of the lawn areas, outside the garden, are not irrigated. 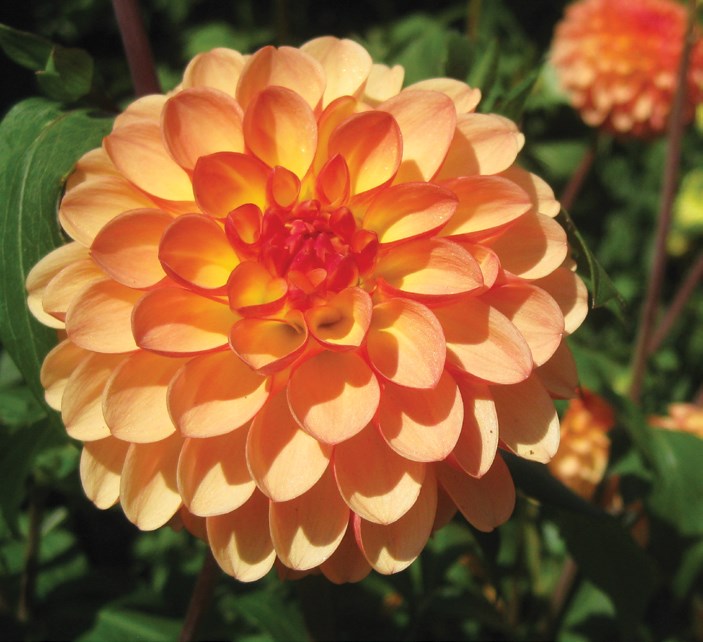 This beautiful dahlia is among the annuals that give the property its incredible seasonal color. Photo: The Preservation Society of Newport County

The gardening calendar features a multitude of variety

Donahue finds his job diverse as well as rewarding. “The year goes fast,” he says. “Every single month I’m doing something different.”

Throughout the off-season, January through March, Donahue is growing his own perennials, annuals and vegetables in the Green Animal’s greenhouses. He also participates in regional flower shows locally and in Providence and Boston.

Extensive spring clean up begins in March. Perennial beds are cut back and tidied up. In April, the focus is on tree pruning. May is mostly all about seasonal planting in the formal gardens on average 3,000 to 4,000 annuals, perennials and vegetables. Because Donahue tries to keep the look decidedly “old-fashioned,” it’s not unusual to see petunias, ageratum, vinca periwinkle or bedding geraniums in the formal gardens.

June is the time to keep up with all the growth, sweeping the paths clean and deadheading the annuals. In July, the crew keeps things afloat by topdressing and fertilizing the flowerbeds.

August is focused on the 200 or so individually staked and tied dahlias, which start blooming heavily at this time. The vegetable starts to deliver its crops and needs attention. September is the time for addressing small landscape construction projects or to do landscape plantings. October is leaf removal time. Green Animals closes by Columbus Day. Clean up is performed the month of November and can go well into December.

Is there a month or even a week of rest for Donahue? Not really. But he says he wouldn’t want it any other way.