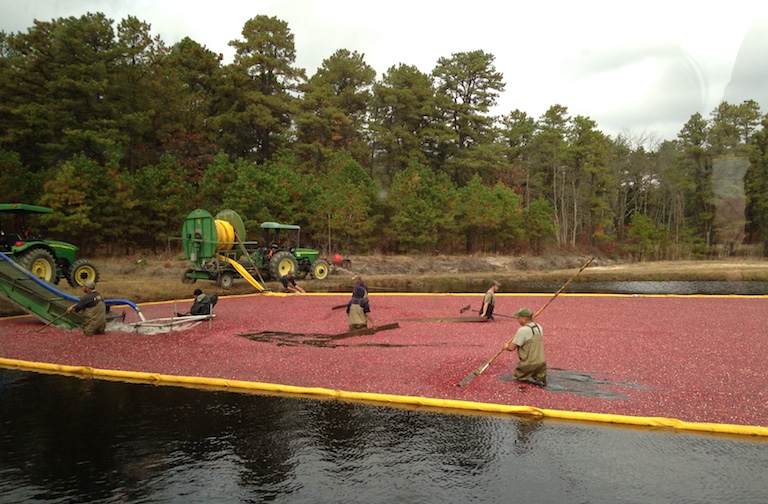 The October cranberry harvest in NJ.

If there’s a staple to the Thanksgiving meal besides turkey, it would be cranberries. How did this come to be? Because cranberries are one of only three fruits native to North America and were eaten by the Native Americans long before Europeans arrived. In New Jersey, the Lenape Indians called them pakihm and used them as “craisins,” drying them for use in soups and other mixtures. They also ground dried cranberries into a jerky-like substance called pemmican, which was good for long trips. When the Dutch arrived around 1655, they thought cranberry flowers resembled crane’s heads and dubbed them “craneberries,” which later evolved to cranberries.

Today cranberries are grown primarily in Wisconsin, Massachusetts, New Jersey, Oregon, and Washington. While there are over 2,400 varieties, only a few dozen are grown commercially. With a love of aerated, acidic soils, cranberries are a perennial crop grown in man-made wetlands or bogs. This unique farming method, while a large part of the appeal of those Ocean Spray ads, also leads to a lot of misperceptions about how they are grown. “People make all sorts of assumptions,” says Brenda Conner, a fifth generation grower and owner of Pine Barrens Native Fruits in Browns Mills, NJ. “Cranberries are not aquatic; they’re a wetland plant that behaves like a desert plant.”

In other words, cranberries do not actually grow in water; they grow in coarse, wet sand. Water is let into and out of the bogs depending on needs and temperatures by a damming system. Once tediously picked by hand, cranberries contain four air chambers which makes them float in water. At some point in the 1960s it occurred to farmers “Why don’t we float all of the cranberries for harvesting?” Eventually, a “floating harvester” was developed which picks the cranberries from plants submerged in water. The picked cranberries then easily rise to the top of the water for collection. Thus, bogs are only totally flooded for harvesting and again in the winter to keep the plants warmer. 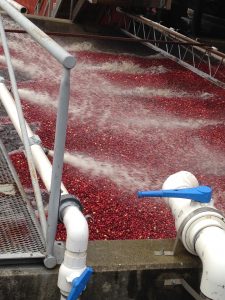 Buds set in July for a 16 month growing cycle, with harvests taking place generally over four and half weeks in October. When plants are in flower, Conner’s farm brings in 900 hives of bees to pollinate. With pests like blunt-nosed leafhopper and diseases like False Blossom, long vine development times, beavers dragging logs into floodgates, occasional bad markets, an abundance of hand weeding, and a two-year payment cycle, Conner says it can take 20 years to financially break even on a new bog. Conner says she sleeps with a computer next to her bed that alerts her if the temperature drops or if there’s too much rainfall. “It’s a 365 day a year job,” she says. “We are an endangered species.”

As a NJ resident, I had the unique opportunity to tour a bog with Conner three years ago. We boarded a bus that drove along the dams to the actual harvest. No, we didn’t get to stand among the floating cranberries as I had hoped, or even get out of the bus. There are very strict USDA regulations regarding the bogs. In fact, workers must wear sterilized shoes into the bog. But we still got an amazing view from the bus windows and open door. We watched as a harvester passed through a flooded bog. As the harvester glided along the water, it released a bobbing red trail of cranberries in its wake. 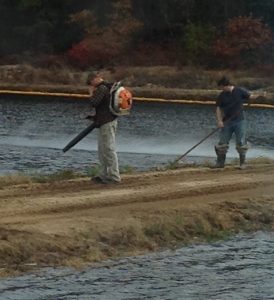 Another use for leaf blowers: the cranberry harvest!

As one bog was harvested, another was being worked on by a gathering crew. Using a cranboom, the same thick yellow “hose” used to contain oil spills, the cranberries were gathered into one end of the bog. And though that day was slightly overcast, the brilliance of the red berries hardly dulled the fascinating and colorful process. Workers used leaf blowers (yes, leaf blowers!) to move cranberries caught at the sides of the bog into the center to be gathered into the boom. Once consolidated, the cranberries were pushed onto a conveyer belt where they were dumped into a dump truck. Workers in the bog used the cranboom as well as “pushers” to get the cranberries onto the belt. “It’s an extremely technical name for a cedar board on a stick,” joked Conner. From there, the loaded trucks went right to the pack room where jets of water rinsed the berries and kept them moving along for quick—about 1,000 lbs. a minute—and immediate shipping to Thanksgiving tables and more. According to the Agricultural Marketing Resource Center, of the nearly 400 million pounds of cranberries Americans consume per year, 20% of them will be eaten today!

This article was adapted from “Crazy For Cranberries” by Christine Menapace in the Fall 2016 Jersey Shore magazine.